Rain in the desert is another creature altogether.  Mother Nature puts on a show like no other.  There I was, sitting on the couch enjoying puppy time when CRACK!!!  The skies lit up like the studio lights when I was doing portraits in my garage.

How is that possible?  It's sunny with lots of blue up in the air.  I looked across the riverbed to see the weirdest sight yet. 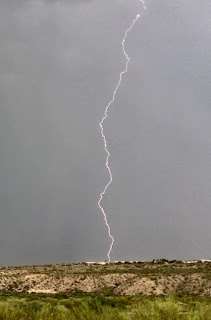 Instantly I got the Alert beeping and vibrating my Apple watch.  Severe dust storms.  Wait ... isn't it raining like cats and dogs over there?  How could you have dust storms at the same time?

You can see where it all started with the wind just beginning to catch the sand.  In no time, the entire mountainside disappeared amidst the fog of sand and debris. 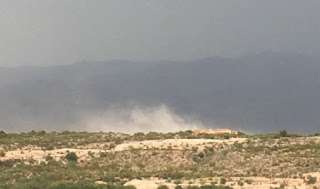 That's about the time I got the SECOND warning.  Flash flooding in Tombstone, about 50 miles away.  I of course grabbed my camera and ran outside to tempt the lightning Gods even more.  In no time the sand disappeared as the rain came pouring down like a curtain at the theatre.  Not here, but right across the way.  I seem to be just on the perimeter of the storms. 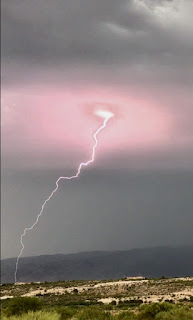 About that time I remembered I wanted to cook some ribs in my Instant Pot.  After all, I've got that propane bottle sitting out there ... I might as well put it to good use.  Twenty five minutes later I had cooked meat, however bland and tasteless.

I put them on the barbecue to crisp up and brown, adding a little sauce for flavor.  WRONG!!!  You always put the sauce on at the very last moment.  I remembered that as I walked outside to check them and found black smoke pouring out the side. 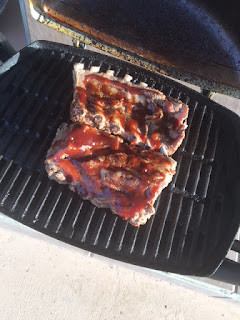 They don't look all that bad ... pretty tasty looking if I do say so myself.  Too bad they missed the mark.  They really should have had MUCH more seasoning and a gallon of sauce.  Tender?  Oh they were tender, just not much in the flavor department.  I guess you really can't beat smoked ribs. 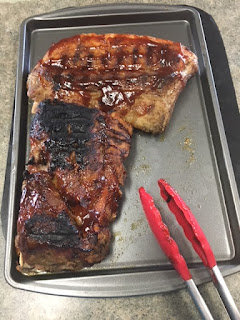 As the lightning got faster and the thunder louder, I headed back outside for a couple more images.  This was a biggie. 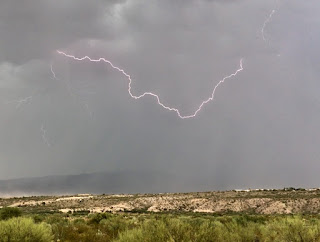 Barely visible in the above image, and almost not even visible here, you can see just how big this strike was and how the lightning spread out like fingers. 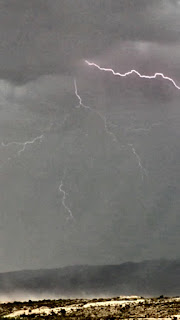 Flash flood warnings began to beep again for my specific area.  It's okay though since I live on a hillside.  When I was a kid, we always camped out on our one-week-a-year vacation.  Several times we ended up in big lightning storms in the mountains, in a huge green army tent that weighed in at like 2000 pounds.  My Dad always told us to never EVER stay at the top of the hill during a storm, nor do you ever run to the bottom of the hill.

Top means lightning and bottom means drowning.  Besides that, you always build your house on the SIDE of the hill for the same reason.  Lastly, NEVER touch the sides or the top of the tent when you are inside.  Water will instantly begin to stream in where you touched it.

He was right, because I of course TOUCHED it, meaning I had to sleep in the wet sleeping bag all night.  I learned my lesson well.  I'm glad I'm in a house on the side of the hill when Mother Nature comes to visit.