The Arizona desert sure knows how to throw a party!  I was thinking last night how nice it would be to have a big monsoon storm come through.  Be careful what you wish for!  I could hear the thunder coming down the valley, but most of it seemed to be missing my little corner of the world. 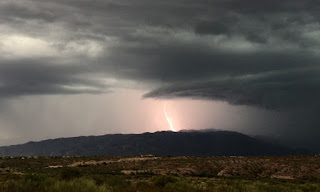 I ran outside to get some lightning pictures when I got FIVE alerts on my phone.  Good grief!  I think that's a record!!  I snapped a couple more pictures and covered up my barbecue. 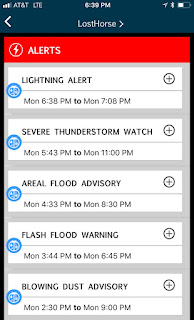 Next thing I know .... CRACK!!!!!  I jumped about three feet high and held my ears it was so loud.  That was WAY too close for comfort, and blinding to boot!!  Forget taking pictures!  I ran back underneath the patio cover.  Yikes!!  That one either HIT the railroad tracks, or landed VERY close to it right in front of my house. 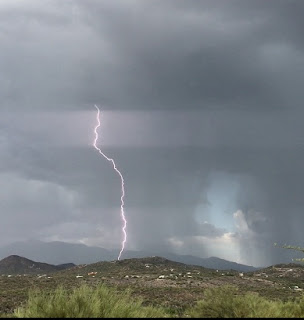 I had heard the train whistle as it came into the crossing just before passing through my property, but no train ever showed up.  That was weird.  In no time the rains hit, harder than I have ever seen in my life. 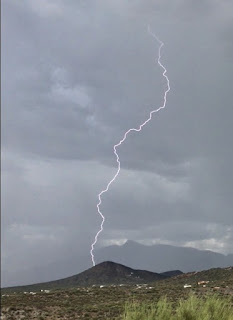 Lightning was striking everywhere at once and it rained so hard I could barely see past my little fence.  I stayed inside until I couldn't stand it any longer.  I HAD to take pictures.  The lightning got bigger and more fantastic!  What a party THAT was!!! 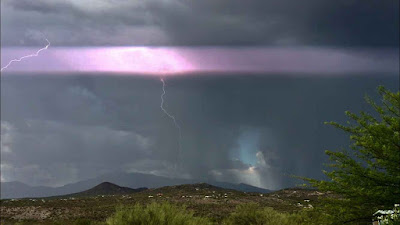 It starting lighting up the entire sky before sending a bolt to the ground.  Still no trains.  It must have knocked out their switching system or something, because pretty soon there was a pickup driving the rails and guys getting out to walk the line. 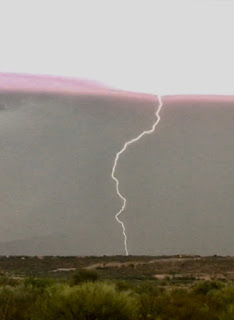 Guess I don't need to water the cactus today, since the sideways rain watered everything for me, even everything underneath the patio cover.  This went on from 3:00 to 5:30.  The power went out once for about five minutes.  I have to give Arizona credit.  My California house would have been out of power for three days after a storm like that. 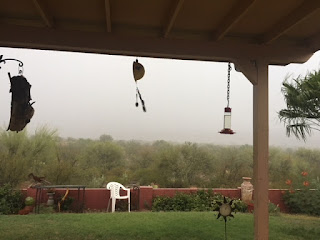 At 6:00, the trains began to move, but stopped again around 7:00, right in front of my patio.  They were shut down completely.  Not a sound from the engines.  I've no idea when they started back up since I finally went to bed.

At least the night was quiet as the partygoers went on down the valley.  It's a chilly 74 degrees this morning (HAHAHA) and the winds are picking up for the next round.  It just amazes me there is so much rain in the desert!!  Unfortunately, the coming monsoons mean no more water station images.  But lightning?  I can't wait!!