It's only temporary I'm sure, but for now, I have the upper hand.  When wasps grow in Arizona, they must think it's Texas.  I've never seen such huge beasts in my life.  Not the usual half inch long irritation, these babies are over an inch long and HUMONGOUS!!!  I can't even imagine getting stung by one.

This is my bird house, made with all natural materials that were scavenged from the forests of Oregon.  It should be the perfect bird residence.  Instead, the wasps took it over and filled it to the brim with a baby hatchery.  Wasp condos are NOT good.

Lucky for me, my pest guy happened to stop by.  He was wafted by wasps as we talked on the patio.  He instantly turned his spray nozzle around and soaked the interior.  The wasps are dead, but the lovely bird house can no longer be used for birds, not that they would have used it anyway.  It's mostly for decoration. 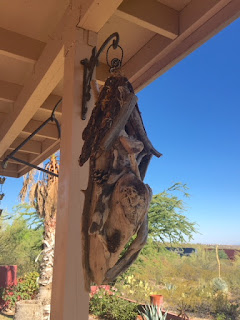 Apparently it wasn't big enough, so they planted another condo in the rafters of my patio.  I grabbed my trusty can of killer spray, stood 20 feet away with a clear path to shelter and sprayed for all I was worth.  It took awhile, but they finally died and I knocked the nest down.

It happens I was waiting for a package to be delivered.  I checked the front door steps, only to be dive bombed by MORE wasp jets.  The war was ON!!  Half a can later, THOSE guy lay at my feet.  I scraped the nest off the ceiling and looked around the awning. Sure enough, there was another HUGE nest ... this one at least 4 inches across.  Prolific little buggers.  For this one I had to get my ladder and perch it on the porch to get enough height to reach with the spray can, which was now empty.  No worries, when in battle, always have enough ammunition!!

These guys are gone now too, but the nest is too high to reach.  I'm pretty sure I've only won a few battles and the WAR will continue.  Wasp spray is on my grocery list. 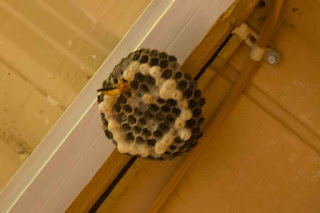 I was rewarded with a magnificent Arizona sunset.  It just amazes me the colors and cloud formations you can find in this desert country. 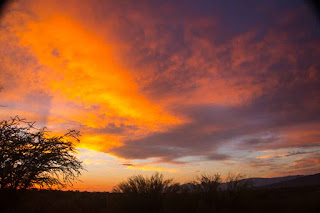 It lasted almost half an hour.  How can you not love it here?? 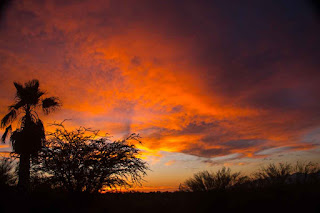 Next up?  How much would you pay for a GREAT night's sleep???