This is my favorite morning view from my patio.  Hidden underneath the Mexican bird of paradise are Mom and Dad quail, fourteen babies and two teenagers who have joined the group.

The weather guessers have predicted rain every day, albeit only 30% chance.  It's all been dumped in Mexico before it even gets close.  The cloud cover however, has kept the "feels like" numbers in the high 90's.  I probably shouldn't say anything about NO monsoon.  Monsoon floods bring scorpions and spiders. 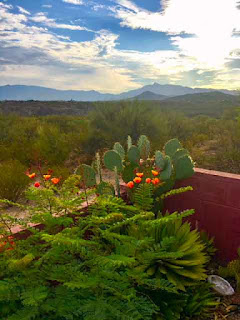 I planted the two barberry bushes in the flower beds.  It's actually a very hard combination of rock and very little soil.  It took me 30 minutes to dig just one hole.  In no time at all, they looked dead.  I watered and watered them and said a little prayer.  PLEASE live!!

By noon, remembering they were in the shade of a tree when purchased, I stole my barbecue table and set it over the top.  Maybe a little shade will help.  In the meantime, I've watered them three times a day to keep the leaves from shriveling up.  I thought these things were hardy!! 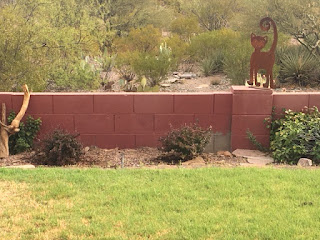 At 9:00, I loaded up and headed off to the quilt store on Oracle Road .... at least a two day wagon ride North.  That nice dark-haired lady that works there?  She should get a raise.  I've been eyeing one quilt for about three years.  It comes from a lady who lived here during the depression.  At any rate, I came home with the pattern.  More on that later.

It was 107 when I navigated the wagon trail home.  How my poor little Jeep survives that heat, I'll never know.  After several hours on the dusty trail, I figured I'd make something cooling.  How about popsicles? 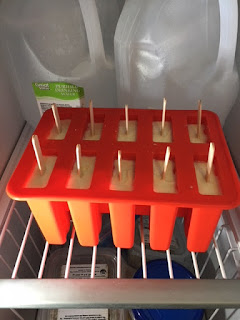 This particular batch was lemon cream, only all I could find was an old bottle of lime.  I won't throw them away, only because I really could use those sticks for a second batch. 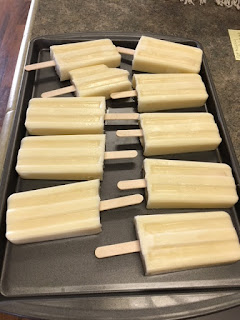 Watermelon ..... now THAT should be DELICIOUS!!  I cheated and bought the already-cut-up kind and threw in a tablespoon of lime juice like the recipe said. 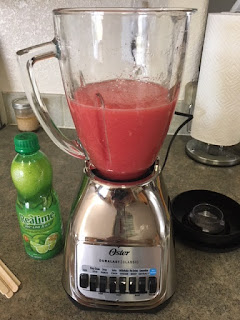 Super simple ... don't these just look amazing?  You would think they tasted just like that watermelon, right???  Wrong!!!  They were barely sweet and didn't taste like watermelon at all!  They taste like water with a drop of sugar.  I'm eating them just because I'm trying not to be wasteful.  Maybe there's a bottle of watermelon flavoring I can add. 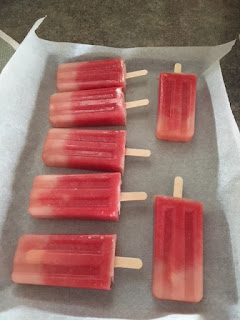 Since I've been craving pizza, I decided to whip up a pizza quesadilla.  Let me tell you, it was awesome!!  It's filled with mozzarella cheese and lots of pepperoni that I nuked for 30 seconds just to get rid of the grease.  The low carb tortilla grilled up nicely and tasted WONDERFUL!  No cauliflower was injured in this preparation! 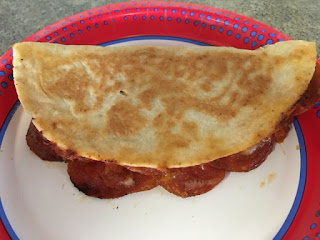 It's furniture moving day.  My old bed will be dismantled and moved to the spare bedroom (by me of course), in anticipation of my NEW bed arriving tomorrow.  A Sunday delivery?  Well that's what they said anyway.  Not only that, but a Sunday delivery between 3:00 and 7:00 PM.

That means sleeping in the spare bedroom tonight.  Hmmmm maybe I should wait until Sunday morning for the big move!!!