Pancakes On The Patio

With a break in the action of the morning critters ... not really, but you're probably tired of deer pictures ... I decided to try and find something new for breakfast.  This Keto diet thing has me eating a LOT of eggs.  In fact, everything about this has me confused.  Eating a lot of whipping cream and eggs just goes against the grain and my years of doctors saying all that stuff is bad for you.

There seem to be a lot of bread recipes out there, but so far I'm doing fine without it.  So how about trying some pancakes?   Here's some almond flour cakes.  They look pretty yummy, right? 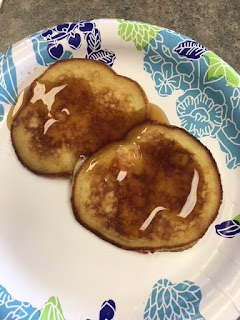 Smothered in syrup, they would have been awesome.  After all, anything smothered in syrup HAS to be pretty tasty.  Just don't use THIS syrup.   You might as well be having thick water on your pancakes.  Basically, there's no taste AT ALL!!

Maybe it would help if I added half a bottle of maple flavoring?  I really am trying to be good, but am stuck at 11 pounds lost.  Hey, I'm not complaining because my clothes fit so much better.  Basically, all I did was give up bread, pasta, rice and sugar.  That's 75% of my approved food groups. 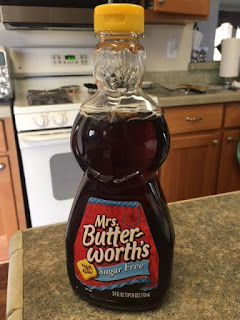 While not really enjoying the pancakes on the patio, I watched as this guy went back and forth across the top of the wall.  His coloring is magnificent ... copper and green in the sunlight.  He's also pretty big and really scaly like a dinosaur! 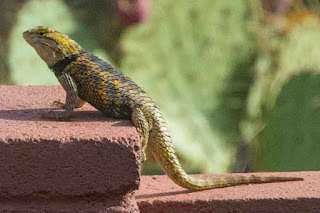 That's when the slow train came by.  Forget the pancakes, what are they doing?  The thing in front of the CAT was moving back and forth along the tracks.  I can't see how since it was going over the TOP of the cars. 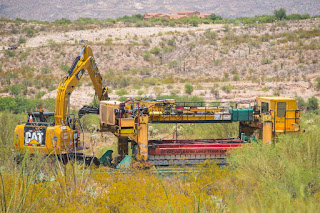 It backed all the way up, made lots of racket, then the excavator held the side down as it pulled forward. 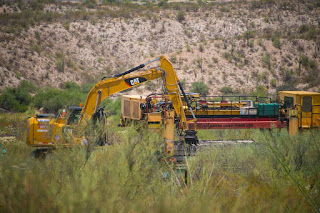 AHA ... that thing was picking up and depositing those concrete blocks on the car nearest the CAT.  Then the CAT would pick up a stack and place them on the ground, all while the train was still moving.  Don't we have railroad ties any more? 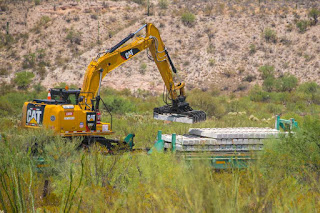 Once that row was gone, it came back and deposited another layer.  Fascinating to watch, which I did for about 30 minutes.  Pretty soon the entire train came back without any more blocks on the six cars between the engine and the CAT.  Well that was fascinating to watch!  Not as good as deer, but a distraction none the less. 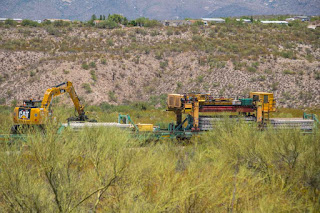 While I watered the cactus garden in the morning cool of 80 degrees, I contemplated my cabin fever.  You know I can't stand to sit still for very long and watching 12-15 trains a day going by just isn't doing it for me.  Time to head out to SOMEWHERE.

That's when I noticed another beauty blooming, which probably means I'm watering the cactus a tad too much.  Isn't she pretty? 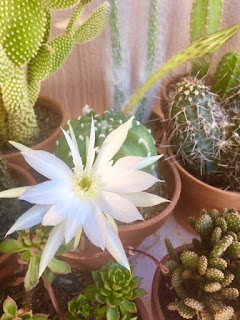 Lucky for him, I haven't seen the tarantula since our first encounter, which means the plants really ARE getting watered after a triple check of the premises before I step outside.

In the meantime, I have another visitor to deal with in the guest bathroom.  Now where did I put those firecrackers??