What Do Roadrunners Eat?

It was a beautiful 68 degrees yesterday morning.  The cool doesn't last long, so any yard work has to be done by 6:00 am.  With all the plants around, I've been motivated to fill in this missing ten feet of landscape.

I'm sorry to say the nursery wasn't in very good shape.  Cactus was in abundance if you wanted to pay the big prices .. hardly anything under $50.  Heck, I can dig those out of the desert.  It's also hard to find something that won't grow tall and block the view of my water station (the most important feature!!).

The solution was Japanese Barberry.  They had two very nice specimens for $20 each.  As you are aware, I'm NOT a gardener.  I was a little taken aback when I got home and discovered (via the internet) that these plants in some areas are akin to kudzu, that awful thing that overgrows everything and you can't get rid of.  Being the miniature variety, I hope that doesn't happen. 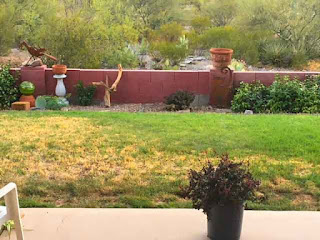 While planting the first one, who should peak out of the shrubs but Momma Quail and FOURTEEN babies.  Good heavens ... she is a busy girl keeping all these guys rounded up.  Dad is also totally attentive as he walks the concrete fence while they meander from one side of the yard to the other and back again. 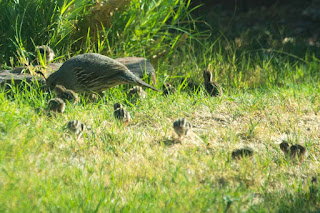 They are just so darn cute!!  That's when I spotted him.  A local guy this roadrunner, who must have smelled the babies.  He was on the fence in a flash, but not before I ran out and scared him off.  I read on Allison's blog that a roadrunner ate her baby hummingbirds.  WHAT???  Not on MY watch buster!!  At just a little over an inch tall, they need all the help they can get. 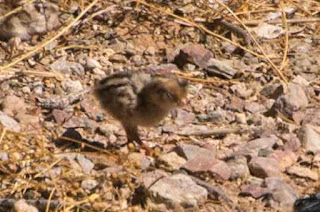 No picture of the roadrunner ... I was too intent on getting him OUT of the yard!

Two minutes later, I watched this big guy try to climb the wall and escape.  I thought it was a lizard that lost his tail.  He was FAST as he skittered along the mow strip. 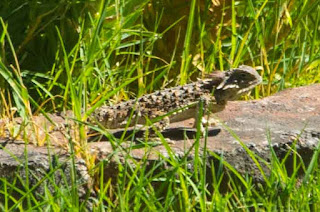 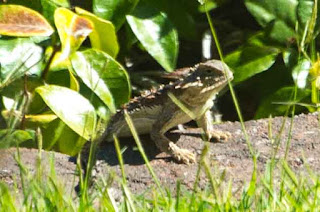 Of course you can't go to the nursery without looking at all the chatchkeys they have for sale.  Although I really wanted the $50 dragonfly, I passed.   But when I saw this globe, I was hooked.  It has a solar light inside.  Who thinks up these things?  I definitely need one more, and since rules dictate things must be in sets of three, maybe I need TWO! 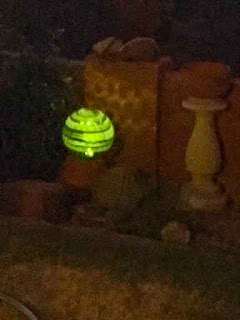 I'm happy to say no baby quail were eaten on my watch ... this time anyway.  What  I ate was a piece of this beautiful tuna steak. 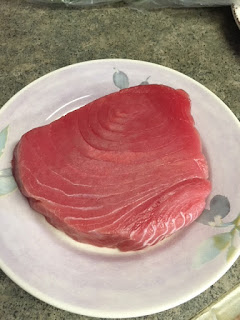 Yup ... I was back at it on the barbecue.  I know tuna is supposed to be eaten VERY rare.  However, the only thing I like rare is a good piece of cow.  I have to admit it wasn't as tasty as it looks. 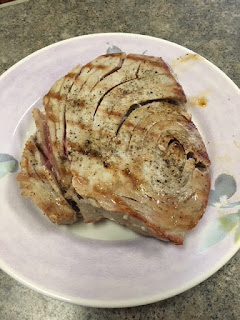 I'm heading off to the farmers market in Green Valley this morning.  During the hot summer months, it moves indoors, meaning there probably won't be much there.  I have an ulterior motive.  The Tractor Supply store is right on the way.  They have horse troughs that can make any number of things ... like planters and swimming pools!!!