My day began with a spectacular sunrise, in fact pretty epic in my book!  Just what I needed to get my act together and try my hand at handymanning.  I don't think that's a word.  Anyway, at 5:30 in the cool morning 80 degree weather, I gathered up my tools. 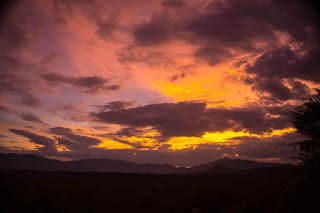 I refitted each tile and measured out the spaces.  Nothing fit like the day before.  I was very careful to keep all the tiles in order, but when it came to getting them flat against the wall, they were all wonky. I spent another hour hammering and chiseling away more of the old grout. 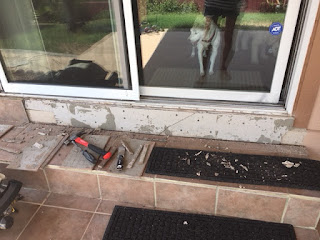 See all those grey spots on the white above?  That's where the old mortar was sticking.  No wonder they were all coming off.  Just as an FYI, did you know that thin-set mortar will remove your fingernails in about 10 minutes?  I guess men don't have to worry about that.

No, it is NOT as easy as they make it look on YouTube.  That stuff was thick and really hard to spread.  In no time, it was all over me, the steps and the dogs!!  Yeah, that one spot is a little off kilter.  I just couldn't get the old grout out of the channel without fear of breaking the tile.

All those pieces laying on the steps are for the top edge.  The problem is each one has about half an inch of hardened gunk on the back that I can't remove without breaking them.  Today I'll go see if I can find something to use as a cap.  At least it's a lot better than it was.  Whoever did this originally had about as much experience as me!! 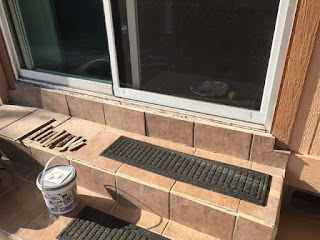 Two hours of being bent over hit me between the eyes this morning when I tried to get up.  Good grief.  Hello there muscles, you unused weak little critters you!!  My muscles are so sore it hurts to touch them, let alone move around.

Trying to distract myself from the pain, I went out to the garden and collected all my vegetables.  People are posting tons of pictures on Facebook of their productive gardens.  Mine ..... not so much.  Here's my garden bounty, at least those that the birds have not eaten!! 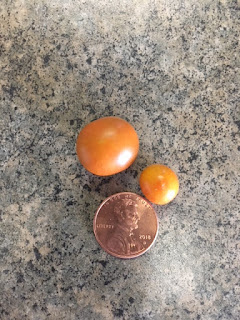 I might as well toss them to the quail.  These aren't the ones from my back yard, but another group growing up in the FRONT yard.  There are 13 babies, all of whom have survived. 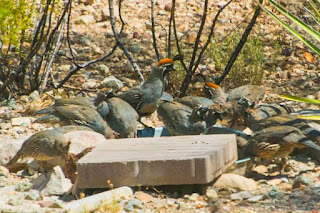 On a side note, the score is Nancy 2, Spiders 0.  I walked into my kitchen and straight into an invisible web.  Don't you just hate that?  I grabbed my swiffer sweeper and prowled the kitchen until I found the culprit.

There's another one on the ceiling of my bathroom, but I can't reach him.  No way am I getting up on a ladder swinging a broom.  They would just laugh when I fall off.

I did finally go on a short road trip.  Not exactly short at 70 miles away, but it was interesting to see the big little town of Willcox (with two l's).  Pictures tomorrow!!