My Sixth Sense Is Kicking In!!

You know how every so often you just feel something's up?  It happens to me quite often in the Arizona desert.  I think that's how I found that scorpion.  I mean really, who looks in the bathtub every hour or so?

Me ... I do.  Mostly I'm looking for those huge spiders.  The Westerfields sent this photo to me from Just Joking.  It's ALL me!!  This is what my house is going to look like if I find another big one inside. 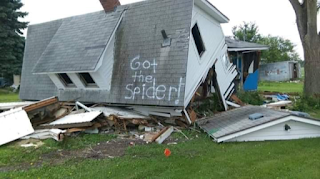 So when I get that feeling, I always jump up and look out the big sliding glass door.  My camera is strategically positioned within a three foot reach, because more times than not, I find something to photograph.

Look who came to visit this day!  A real beauty with a huge rack of horns.  This is not the same one that previously visited.  I ever so quietly opened the door to get a better picture.  Pictures actually, like fifteen in a few seconds. 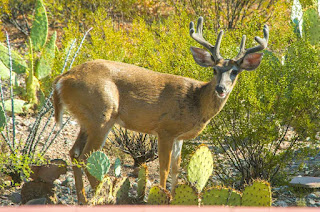 I watched for a bit and sat back down.  Wait ... I need to look again.  There were TWO!  How cool is that.  This time I didn't sit back down.  I just stood perfectly still and watched. 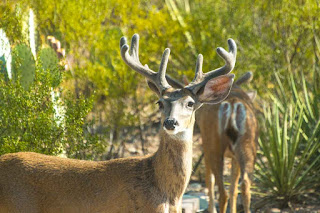 I was pretty sure they were going to empty my small water station.  Maybe I could sneak out and turn it on to refill the trough. 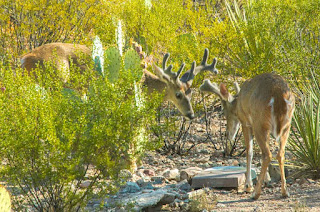 That's when I spotted him in the bushes.  Oh my goodness there are THREE coming to drink.  All males it appeared, with antlers in various stages of velvet. 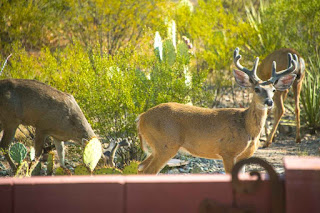 As I continued to watch one more came from down the hill.  FOUR!!  There are FOUR deer drinking at my station.  I was smiling from ear to ear.  There have never been this many!  They ate a little and drank a little more, draining it completely. 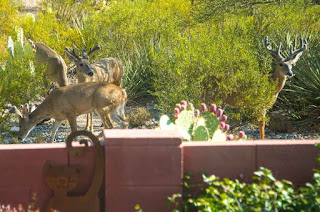 I think I need a bigger bucket!!!!  Instead, later in the day, I hooked two garden hoses together and ran it to the station.  Now I can sneak outside and turn on the water, giving them plenty to drink. 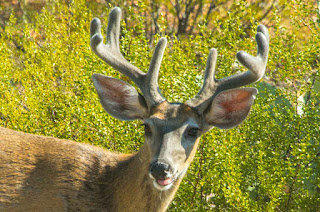 Last summer there were no deer at all, so you can imagine my excitement over THIS year!!  I'm so happy my sixth sense kicked in or I would have missed the whole thing.  It always pays to listen to whoever is in your head saying "go look"!!  It might just be a scorpion in your bathtub!!

Come time for sunset, it didn't disappoint.  My sixth sense kicked in again as it does every evening.  Go look at the sunset it says. 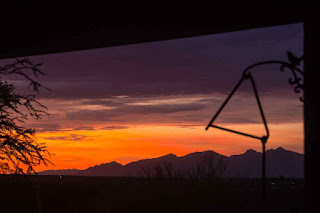 It's really good exercise too, since it kicked in about eighteen times.  Every time I thought it was the best it could be, it got better, so I got up and took another picture.  This went on for a good 40 minutes. 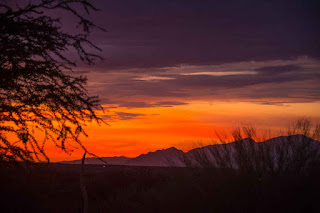 I'll probably be sore tomorrow from getting up and down so often!!  The second day is always worse.

It's a cool 78 degrees this morning, so I'm outside soaking it in.  My Giants baseball team are finally kicking some butt ... even winning after an excruciating 16 inning game.  At long last they are in third place with plenty of baseball to go.

With the 103-105 days, I'll probably be staying close to home.  Several women have been lost in the desert recently, with only one rescued.  It's just too hot to be out roaming around, even if you think you are prepared.