I couldn't stand it any longer.  I had (and still have) cabin fever.  I really have a hard time staying inside when there are so many things to see in the old West.

It was a long hot drive, with my poor little Jeep air conditioner working as hard as it could.  I thought maybe if I got a good chill in my bones before getting there, I would be able to beat the heat.

I was surprised as I drove through town to see almost every building closed down, as in out of business.  This little town is in trouble it seems.  Come to find out, it only has 3800 residents.

This is Historic Railroad Park, with not a human in sight.  The original railroad line is just beyond the sign, as evidenced by the Union Pacific train that went by going about 50 mph. 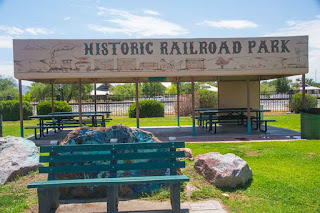 Turns out there was one of the young female variety of humans sitting in the top of this 300 year old tree.  It's perfect for climbing she said.  A girl after my heart!! 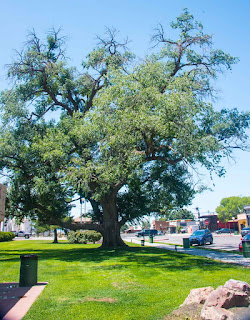 So this is the main reason I went there.  My heros have always been cowboys, and Rex Allen was one of them.  Not only that, but his voice on the Disney channel (one of the few I was allowed to watch) was so memorable, I would still recognize it today. 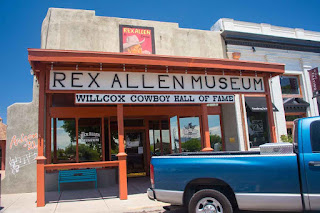 But first, lets interrupt the days of Old West cowboys and check out the town.  Some of these buildings are just fabulous ..... and original!!  Here's a little tidbit for you ... the surrounding area of Willcox (I hate autocorrect ... it keeps taking out the second L) has begun to produce wine.  So much so that it has not one, but TWO wine tasting rooms, stealing all the thunder (and tourists) from Sonoita Arizona.

This building is the newest winery adventure and has yet to open. 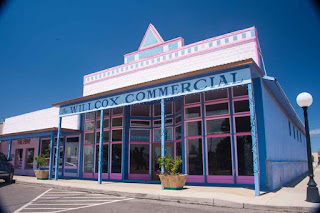 It won't take long until their vineyards go the way of Sonoita I imagine.  The Arizona desert really wasn't meant to grow grapes.

Wait ..... look at this empty store.  Actually all but four were empty.  Anyway, THIS would make a perfect QUILT STORE!!  And it's for rent!  I'll check it out later.  On with our tour. 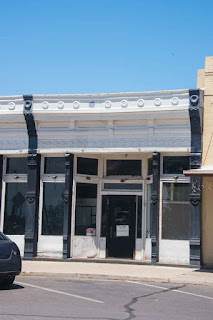 You might be aware of Marty Robbins, legendary country singer and race car driver.  Why is there a museum in Willcox??  Apparently he and Rex Allen were good friends, and Rex moved this museum here from Glendale Arizona.

It's the Friends of Marty Robbins Museum, run by Juanita Buckley, founder and President of Marty's fan club. 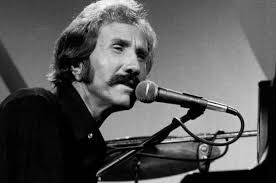 Both museums were supposed to open at 11:00.  I finally saw one man go in at noon.  Sadly, I think we were the only two people in town.  I paid my $2 and Juanita turned on the video for me.

There were lots of pictures of Marty glued on sheets of paper and framed, along with many newspaper clippings.  I admit, I didn't sit through the entire video. 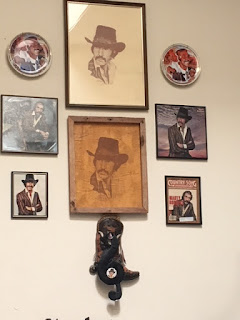 I thought this was the most interesting piece of the collection.  It says "to Marty Robbins with much love, Felina from El Paso".  You might recognize that song ... Felina, written and sung by Marty. 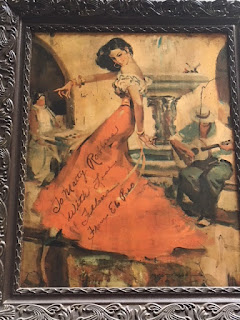 At any rate, unless Marty Robbins is one of your all time favorite country singers, you could probably skip this little museum, even if it is only $2.  Next up, THIS little sign caught my eye.  It was the only place in town that was open when I arrived on a Saturday at 10:00.  Look closely at the sign. 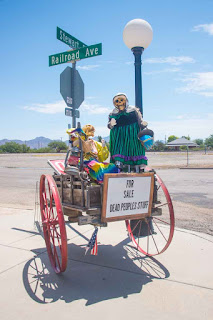 Yup, this little store sells dead people's stuff.  A true statement I suppose.  With fans running everywhere in this little building, it was at least cooler than being outside.  Surprise!!  I came away with no purchases. 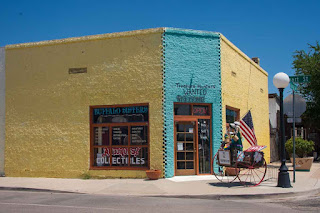 As I wandered back down the block, I spotted the movie theatre.  They still show movies here, although on this Saturday, it too was closed. 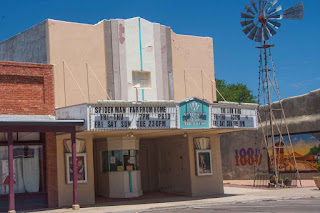 Maybe a quilt shop wouldn't last long here either.  As I returned to the Marty Robbins museum, I heard the lady say someone was insistent on seeing the Rex Allen Museum next door.  A little old gentleman arose from his chair, donned his cowboy hat and said he would open the door, just for us.

Rex Allen is the real cowboy hero around here and I didn't want to miss this little piece of history from the days of Roy Rogers and Gene Autry.  I spent an hour walking around, mostly because it was the only building on the block with air conditioning.

In the interest of time, I'll show you some pictures of that tomorrow.  YeeHaw!!!