The last of the three missions I toured was Tumacacori.  It was started in 1691 by the Jesuits.  At that time, Spain thought they had amassed a fortune and weren't passing it along, so they were deemed bad guys and mostly all killed.  The church was abandoned for a year or two until the locals, along with the Franciscans, began construction of Mission San Jose de Tumacacori.

This is where everyone ran to when the Apache raids were happening every day.  It is very similar, maybe a little larger, than the other missions we saw. 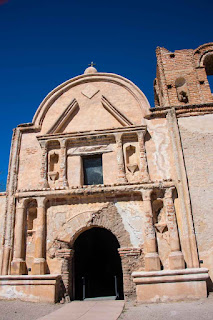 Just like the others, the sanctuary is very narrow and long, with wooden beam ceilings.  Although in disrepair, at least most of this one is still standing. 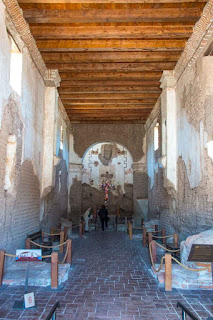 Here is a picture of what it probably looked like in the days when it was finished.  This archway collapsed some time ago and is much narrower than the picture looks.  Even in it's current state of decay, it's a very reverent place to stand.  You can feel the history here. 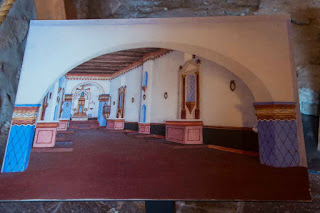 You can see remnants of the beautiful paintings around the ceiling, but over time water has done it's work of erasing most of it.  It's very sad to see this beautiful building falling apart. 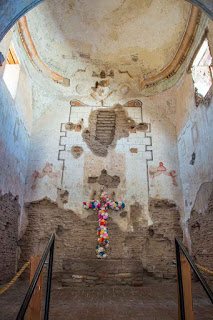 Looking back at the large entrance doors, you can imagine what it once looked like.  Although there was no tour guide through this mission (you walk around the compound on your own) I'm guessing the wooden beam roof rotted away, letting the water take it's toll.  They have at least replaced the roof to try and keep the remaining walls stable. 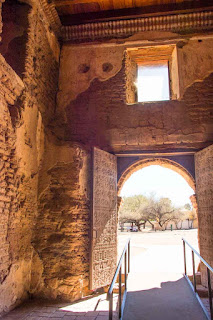 These pictures around the building give you an idea of what it might have looked like when it was new.  As you can see above, the balcony is no more. 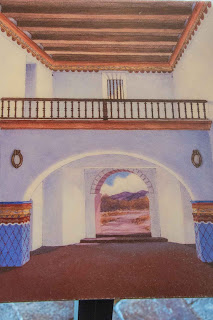 Just inside the front door was this archway and a staircase heading up to the second floor where baptisms were held.  Unfortunately, they have a padlock on the gate just out of sight. 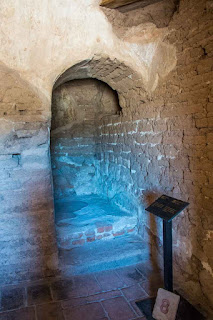 Out the back hallway is the sacristy where the Priests changed their robes.  This part seems to be in better repair due to an adobe ceiling instead of wood.  Once outside, the first thing you see is this beautiful round building in even better condition.

This was where the locals would mourn their dead before being buried in the cemetery at the end of the courtyard.  The holes in the wall are from the scaffolding they used to complete the top row of beautiful brick.  The domed ceiling was never completed.  In 1848 it was abandoned as everyone moved to Mission San Xavier Del Bac to escape the marauding Apache. 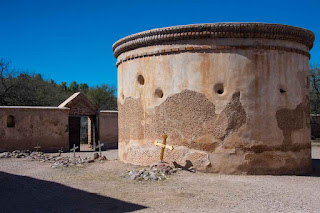 Although used as a cattle ranch, the courtyard becoming a corral, eventually people returned and began to use the area for it's intended purpose, a cemetery.  In the surrounding wall are 14 niches representing the 14 apostles. 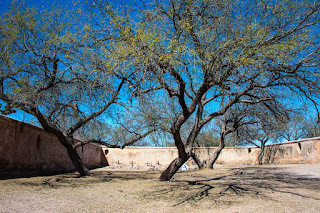 It is sad to note that the recent rains we had made their way into the building and a large chunk came loose, causing even more damage.  Just seems to me that if they asked the community of Tucson, they would get more than enough volunteers to do whatever is necessary to keep this building safe.  Maybe I'm just an optimist. 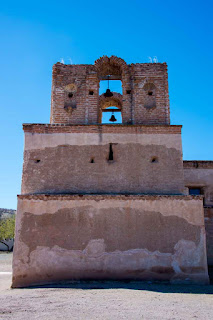 As you can tell, the bell tower is made from all brick instead of adobe.  What remains is still beautiful and well worth the trip to see it.  Tumcacori is just three miles south of Tubac, which is another GREAT place to spend the day perusing the many shops full of cool STUFF!! 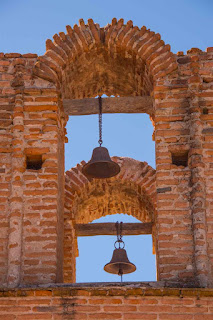 Also on the grounds was a large adobe storage building that was eventually turned into living quarters and there is another building which represents where the natives lived.  It's a small adobe building with cactus branch roof and a shade cover outside. 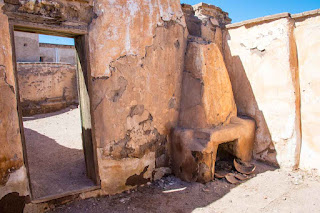 The next Mission would be Xavier del Bac.  They were built about a day's walk or ride apart, meaning about 20 miles or so.  I've shown pictures of it before, but it's so spectacular, I think I'll go again.

I wish I had more time to take pictures at Tumacacori, but I was already an hour late for an appointment in North Tucson.  It seemed like it was in Casa Grande, I had to drive so far.  It's my latest project I've been waiting to tell you about.