The only thing more fun for me than a rodeo, is riding my own horses.  Unfortunately, I lost my last two a couple years ago.  First time in 68 years I've been without a horse.  During that time, I rode in many a rodeo, parade, horse show and cutting competition, not to mention working cattle on the ranch.  That makes rodeos right up my alley!

We picked up granddaughter Laila (Patty and Dans granddaughter) and headed off to La Fiesta De Los Vaqueros at the Tucson Rodeo grounds.  After maneuvering through the muddy parking lot (wouldn't that be fun in a 4-wheel drive .... wait, I HAVE a 4-wheel drive!!) we hit the ground running.  Here's Dan Chance and his almost-as-tall-as-he-is Laila who is almost as hooked on horses as I was at her age. 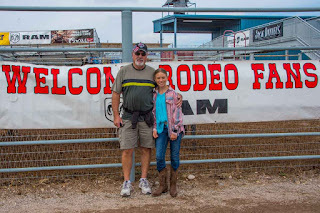 There were lots of pretty pink and purple hats to choose from, but thankfully, Miss Laila has better taste. 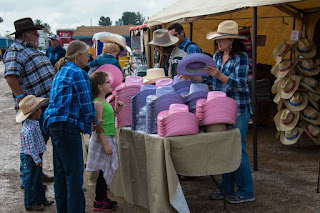 She talked Grandpa into a VERY nice black hat.  She's a girl after my heart, even wearing tall boots with her jeans tucked inside like I do.  Pretty cool!! 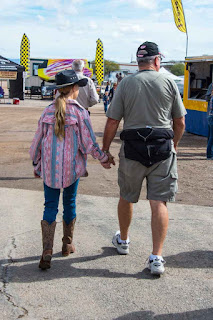 While they checked out a vendor, I hit the bull pens for a few pictures.  These guys are behind steel pipe fencing and fine steel wire, making pictures a little harder to get. 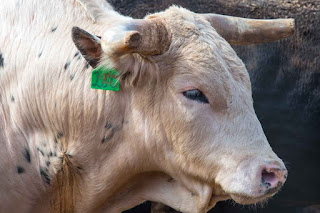 Don't they look nice and sweet?  Just napping in the sun! 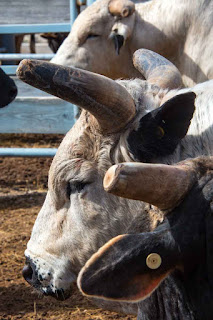 Until this guy!  I had him in my camera lens when all of a sudden he made three quick steps right up to me!  YIKES!!  I can read cattle pretty well, and when they put their head down and step toward you, you better look out!  I took a quick step back as I looked up from my camera.  He wasn't near as close as he was through my lens, but it was enough to get a big laugh out of some men at the other end of the corral. 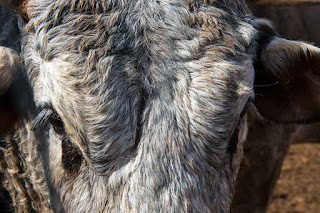 There's lots of amazing food to order ... I mean who can resist a bacon wrapped sausage on a stick?? 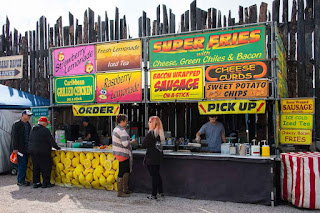 There's also the unusual at rodeos, as evidenced by this little guy.  Yes, that's a tail coming out of his backside.  Don't you just wonder what he's thinking?  Or what his PARENTS were thinking? 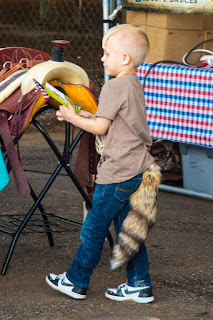 We hit all the belt and purse vendors, hoping for something spectacular.  Miss Laila needs a little more bling in her horse competition outfits! 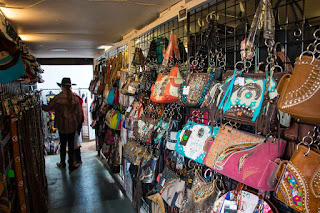 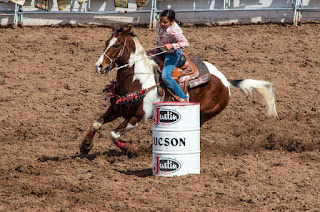 and goat tying for the girls .... they run down the arena, jump off their horse and grab an already tied up goat before tying it's legs like the men do in calf roping. 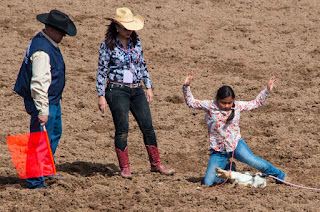 Actually, girls can enter these competitions also, but it's usually just the boys who rope a calf, jump off and touch it instead of tying it up.  As you can see, he missed his mark. 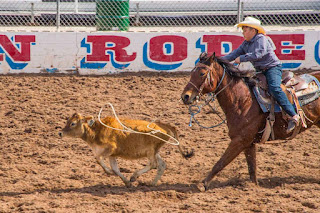 Calf roping is the last one for Junior Rodeo.  Dads, usually seasoned ropers, head the steer while the Junior participant throws a heel rope.  I picked this image because she put the rope EXACTLY where she should have, wrapped underneath the calf.  When Dad pulls the steer forward, both back feet go in the loop and they score!! 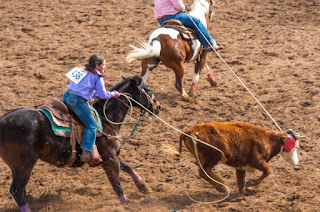 I have to admit I took WAY more images than normal.  If you want to catch the action, you have to shoot fast.  I came home with 811 pictures to comb through.  Rather than overload you with rodeo pictures all at once, I'll spread it out over a few days. Back to work, I only have 750 more pictures to go through!!  I promise I won't post them all!!