I know I've shown you a LOT of rodeo pictures, but bear with me, I promise these are the last of the 811 images I took.  How could I NOT show you this little six year old girl riding her pony in the barrel races.  Now THIS is a girl just like me.  I had my first horse (a full sized 1200 pound boy named Pico) at the age of four.  By six, I was moving cattle all over the ranch.

I had a little trouble getting up on Pico's back, so I would lead him to our tractor ramp, crawl up on that and lead him alongside, then jump on.  He was one of the best horses I ever had!  Can you imagine, sending your six year old out to ride alone?  Nowadays, parents would probably freak out, but back then, it's just what we did!!

This little one didn't win, but she sure did try.  Those pony legs were just a little too short in the deep mud, but she rode like she's been doing it all her life. 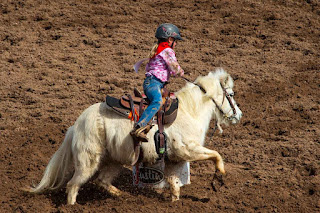 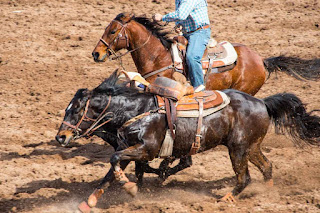 I have to say this doesn't look like very much fun to me!!  Once he has a hold on the head, the bulldogger sticks his legs out front and slides in the sandy soil until the calf stops.  Due to the deep mud, they didn't slide at all ... their feet got immediately swept out behind them, resulting in this. 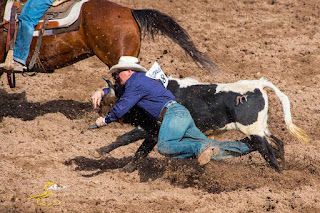 Once the calf is stopped, the bulldogger turns his body and the calf's head to the right until the calf falls down.  It's a timed event which can be done in as little as 6 seconds from leaving the chute, if the ground and the calf cooperate.  That didn't happen on this day. 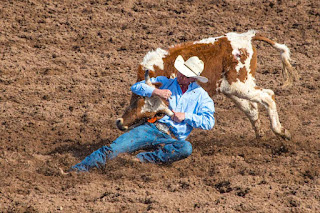 I mean look at this!!  His feet just got swept right out from under him.  These calves are strong at around 4-500 pounds. 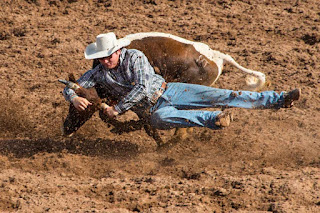 This calf finally stopped, but that put this bulldogger face down in the dirt.  Don't you want to just run out and try this?? 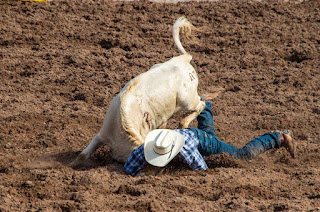 Okay ... that was the last of the rodeo images ... I think.  We got another smidgen of rain with lots of fabulous clouds and now the weather has turned cold, as in a chilly 30-34 degrees. In the meantime, next on my list is new carpet for the guest bedroom.  My plan was to do laminate flooring, but with all the trouble the Chance household is having, I think I'll stick to the much easier to install carpet.