The wonderful rain we've had for the last day and a half will turn the desert even more beautiful.  It's already begun with these cholla.  They hold a rather prickly spot in my memory.  One day when my Dad went out ... this was very early in my life, I was maybe four when we lived in the high desert of California ... he rode Monkey Joe, a beautiful hugely tall red sorrel horse, as he checked on cattle over the hill.

Monkey Joe was known for being occasionally bronky, meaning out of nowhere, he would start to bounce around before breaking into an all out buck.  We were lucky to have the horses we did, so we rode them no matter what.  You always did try to figure out their current mood before jumping on, however. 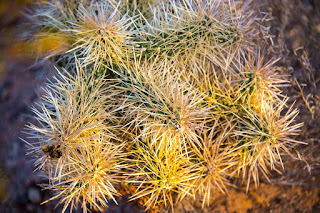 Monkey Joe did great all morning.  When the fateful minute arrived, as he was sliding down a particularly steep hill, his hind feet went underneath an old barbed wire fence just as my Dad saw it.  Too late.  Monkey Joe went to bucking like he had never bucked before, throwing my dad into the biggest patch of cholla on the mountain.

When he didn't come home that afternoon, we went looking.  We finally found him limping down the mountain, leading a slightly cut up horse.  Unfortunately, Dad got the worse of it with needles buried to the hilt in his back.

It required a trip to the local doctor (about 50 miles away) who used pliers to pull them out, one by one.  There was no such thing as pain killers in the olden days, at least not for us.  Monkey Joe recovered the next day.  I can't say as much for my Dad.  He was stove up for quite some time.  I think about that every time I see cholla. 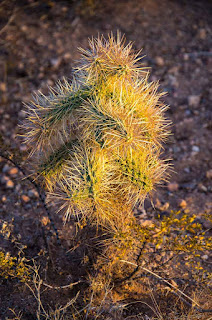 At any rate, as I walked out to the patio first thing after a night's rain, I discovered a million worms on the concrete.  EEEWWWWW!!! 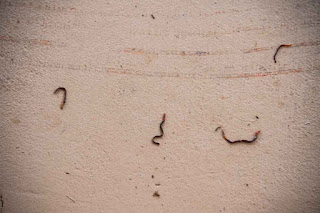 There was even this inch long snail on the steps.  Snails in the desert??  That was a first for me!! 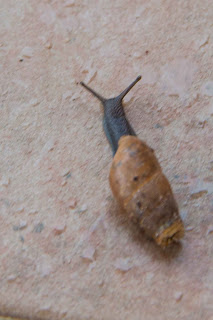 The Thrift Store guys showed up right on time and loaded up all of the donations.  At least that finally worked out and my living room is now a wide open playground for Cooper and his ball.

The rest of the day I worked on finishing this quilt.  I'll take it back to California and have it quilted there, versus buying a quilting machine here.  Yes, I actually did think about it. 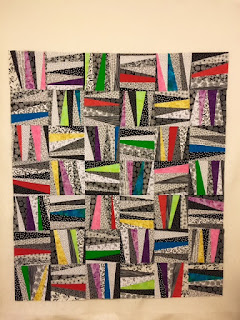 In the meantime, guess what??  There's a huge quilt show in Tucson TODAY, and although I had planned to be there with bells on, it's too much of an opportunity to spend WAY too much money.

My Bernina sewing machine is just fine.  The reasonable accountant in me took control and said I really didn't need to spend $3-4,000 on another machine.  Sewing machines with only a FEW bells and whistles are EXPENSIVE!!  Level headedness has prevailed.

By the way, the wonderful smell in the desert is more from greasewood than mesquite.  I stand corrected!!   Thank you Patsy and thank you Linda for reminding me I don't really have a ship load of money to spend on fabric.  Only a small rowboat full and it's got a hole in the bottom!!  Although that actually doesn't keep me from buying more fabric because my name is Nancy and I'm addicted to pretty fabrics!!