The Town Between The Tracks

Vail Arizona became known as the town between the tracks because that's exactly where people settled.  Military reconnaissance forces passed by, discovering seasonal migrations of Hohokam and later Tonoho O'odham Indians.  Eventually, a wagon route and camping areas were built on the way to the Pantano River.  Although I do cross the river occasionally, I've never seen any water in it.

Eventually in 1880, the Southern Pacific Railroad came to town, following the old wagon trail, laying tracks from the East Coast to the West.  Like many forward thinkers, Walter and Edward Vail arrived to get rich in business and ranching.  They bought up quite a bit of land along the proposed railway, negotiating agreements with the railroad along the way.

The Southern Pacific track was constructed by Chinese rail workers in 1880.  A siding, or passing track, was built on the last piece of flat land before the rails followed the wagon road into the Cienega Creek bed.  It became known as Vail's siding.

Vail quickly became a point-of-transfer site for commercial freighting, mining, ranching and stagecoach travel.  In 1912, a second line was laid by El Paso and Southwestern Railroad, whereupon Vail became known as the town between the tracks. 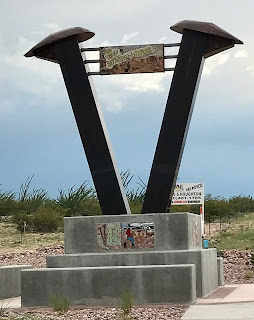 So there you have it, the history of the little burg where I spend some time in the winter.  Don't blink as you drive through, crossing over both sets of railroad tracks about a quarter mile apart.  I'm between the rails further up the hill, which is a good thing.  These tracks are used continuously by freight trains.  One of these days I'll count the number that pass by on the tracks in front of my house.

Lucky for me, the FAST trains travel on the tracks to the South of me, meaning much less noise.  I'm closer to the North rails ... MUCH closer.  It's a good thing I love history and trains.  They don't stop here at Vail any more, but they do go nice and slow around the big corner I could hit if I threw a rock at it.  Yup ... all day and all night long.

We have a gas station, a pizza parlor, a Post Office, a Dairy Queen (YUM!) and a Walgreens.  That pretty much sums it up, although Safeway is building a huge store just North of me!  The only really interesting building is this one, or what's left of it.

This is the Vail Post Office, an original adobe building that requires lots of love and TLC.  Thankfully, one of the schools is going to teach their kids about preservation and how to restore adobe buildings.  Isn't THAT cool!!  I would LOVE to volunteer for this project!! 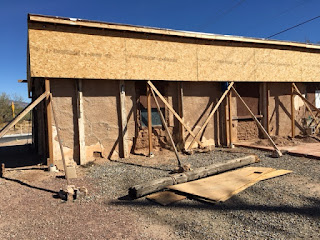 No telling what the building was used for originally.  I'll talk to Mr. Chance and see if he has any info.  If anyone knows about history around here, it's Dan. 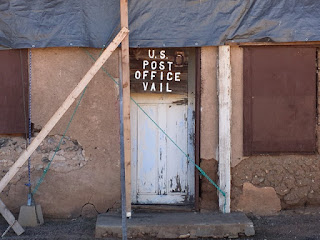 As you can see, heavy rains and lots of water have done their damage to the original adobe mud bricks.  It's my understanding they will undertake this project using the ancient ways of mud, water and straw. 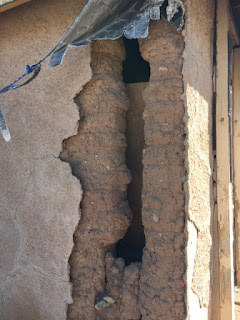 Little known facts .... Arizona became the 48th State on February 14, 1912.  President Taft wanted to make it February 12, but it was Lincoln's birthday.  The 13th was considered bad luck, so they used the 14th, making Arizona the Valentine State.  Courtesy of Patty Chance who sent me a slew of cool facts.

Back to the present time ..... I wandered off yesterday to the Home Goods store.  THAT is a baaaaaaaad store!!  Have you ever seen all the stuff they have?  I found some curtains/drapes I'll share later on.  For now, the sun is rising and it's just beautiful.  Time to go sit on the patio.