Nothing Better Than Good Company

Guess what!  I had visitors yesterday to my humble little Arizona home.  Trouble is, I completely forgot to take pictures.  We were so busy talking and having a good time with the puppies, that I spaced out.  So I'm hoping Patsy, Bill and Clemson don't mind that I STOLE a couple of pictures from Patsy's blog which you can find by clicking HERE.  She has some great images they took on the way over.

Actually from Canada, they are enjoying the Southwest for a few months and are currently staying in their RV near Sierra Vista.  We met in the desert outside Quartzsite.  How cool is that?  I was so happy they came to spend the afternoon with Cooper, Jessie and I. 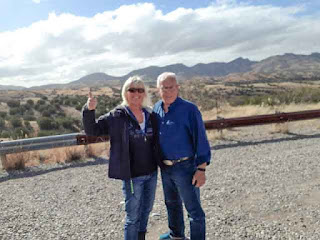 Why don't you see Miss Jessie here?  Because she just doesn't get along with ANY other dogs.  She starts her growly bits and the fight is on, so she got put in Doggy Jail in the bathroom while Clemson and Cooper got acquainted.  Surprisingly, Cooper LOVED him, occasionally trying to get him to play the ball game. 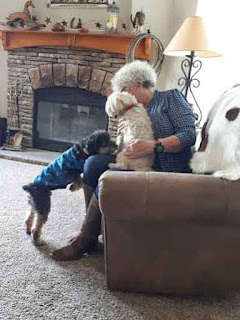 In the end, Cooper worked his charm on Bill, who was soon on the floor throwing the ball for the next two hours!  Thank you Bill for keeping him occupied .... he was in seventh Heaven!!  Turns out Bill and Patsy weren't the least bit bothered by the trains either, since he and his father both worked on trains for Canadian Northern ... least I think that's right. 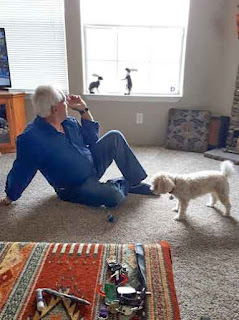 Chef Patty even stopped by for a short time, bringing me the salted butter I did NOT have at dinner.  Unsalted butter on baked potatoes isn't my favorite.  What a sweetheart for picking some up at the grocery store for me.

Their new flooring contractor should show up today.  I said a little prayer that all goes well and it's done in record time.  There's nothing worse than having your entire house torn up.

Patsy, Bill and I had a nice lunch since I had just been to the store and stocked up on all things sandwich-like, made even better by the bottle of wine they brought.  Patsy even gave me an entire bag of corn tortillas, the perfect casserole ingredient, not to mention soft tacos!!

In no time, they were off for home while I watched the Olympics for the next four hours.  That stuff is so addicting.  Of course they have all the best ice skaters going last, so you have to stay up late in order to watch.  As a 20-something gal in Denver Colorado, I spent many hours at the ice rink.  I LOVED skating almost as much as horses.

That is until one day I caught a toe pick and hit the deck ... HARD.  Apparently I woke up several minutes later surrounded by everyone.  How embarrassing.  They hauled me to the office and wouldn't let me leave until I could walk the line without losing my balance.  I guess I hit my head pretty hard.  At any rate, I survived to help manage the ice skating rink in Yosemite National Park a few years later.  But that's another story!!

I think today is going to be laundry day ... hang out with the puppies and count my blessings.  It's just too cold to do anything else, as temperatures have dipped back down to the low 30's.  Brrrrrrrrrrr!!