For those who have never been up close and personal with a bird, parrot, macaw or otherwise, they are WEIRD.  Most of you know this is my little buddy Jonathan who travels with me everywhere.  It's like a traveling zoo in my house.

I hand fed Jon from an egg because in the old days I got a strange hankering to raise exotic birds.  The aviary was 50 feet wide and 100 feet long.  In other words, BIG.  Cooled with huge swamp coolers and warmed by the sun in the biggest greenhouse on the West Coast, the birds thrived.  That means they paired up and produced lots of eggs, unlike most aviaries of the time.

Jonathan was the last one to survive the bankruptcy (not really, but the market for birds fell in the toilet), so I kept him.  Her actually.  You couldn't tell what sex they were until they displayed at around 8-9 years of age.  You COULD have them surgically sexed, which we did with some, but it was rather traumatic and expensive.

Yes, Jonathan is a 46 year old girl.  I'm just as shocked as you are that he's lived this long.  A very strange girl when it comes to loud noises like vacuum cleaners.  Every cleaning day, Jon loves the noise and screams loudly while taking his weekly bath .... in his water bowl. 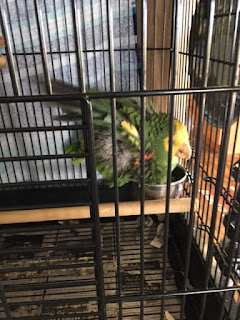 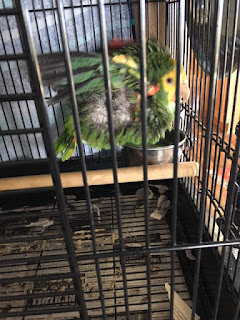 His head gets soaked and he looks like a drowned rat.  His feathers, not so much.  As long as the vacuum runs, Jonathan bathes.  What a pretty boy!!!! 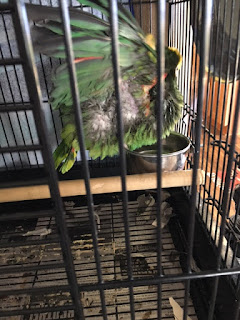 Once I cleaned up the watery mess on the floor, I took to baking again.  Last year at Food In Root Market in Northern Tucson, I tasted a sticky toffee pudding that the nice lady said was pretty hard to make.  An English pudding ... not really, it's more like cake ... that was delicious. 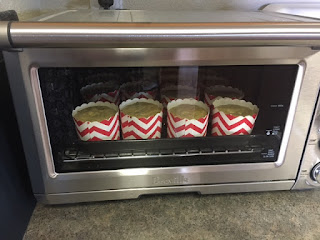 There's nothing better than a baking challenge in my book, even if I do mess things up occasionally.  Okay, OFTEN, but I try hard.  Turns out these aren't that hard to make after all, except for the strange main ingredient.  DATES!!  Who knew??

So while in Indio, I picked up a few (which I hate, by the way) and gave it a shot.  Just let me say they were HEAVENLY!!  Although a little time consuming, which keeps me out of the antique stores (good for my wallet), they were really easy to make.  They taste something like extra moist carrot cake smothered in brown sugar syrup.  You can't beat that!! 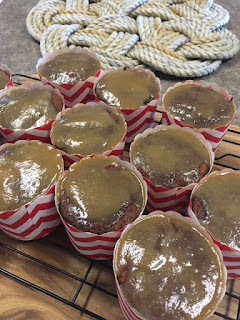 Today Chef Patty and I are heading off to Tubac for their yearly festival of the arts.  There's everything from handmade pottery to original oil paintings to hand carved wooden lamps.  I can't wait to fulfill my list with beautiful Mexican pottery.