Meanwhile, Back At The Ranch

We're not down to the surprise yet, but we're getting close.  After all that Mission history, my brain needed a rest, so when Miss Pat (not to be confused with Miss Patty of the Chance household) asked if I was interested in an art show, I said SURE.  Really I had no idea what to expect, but if Pat says it's cool, then I'll go.

She had met an 89 year old painter who invited her to a show in Northern Tucson.  It seemed to me it was about 100 miles away, as we drove and drove until we found this crazy art gallery halfway up the mountain.  Ettore DeGrazia built several buildings to house his art.  The entrance doors are from an old mine ... in fact, it looks like you are entering a mine when you go in.

I have to be honest, I'm not much into ART.  Really, we were looking for the nice lady Pat had met, but paid the entrance fee and took a look around.  This place was fascinating!!

He not only painted, but did several other types of things like clay art, some beading and some really weird stuff that I don't know how to explain.  We contemplated a hanging thing that had horse teeth and critter backbone parts and pieces.  It was different to say the least.  This painted horse head looked like he had doodled on it one day just for fun. 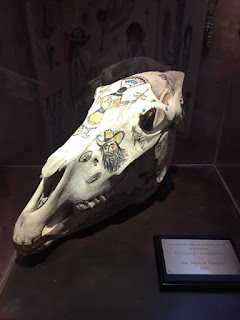 He was very much into the Native Indians and early Christianity. 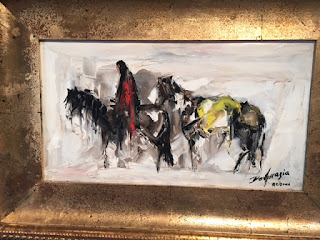 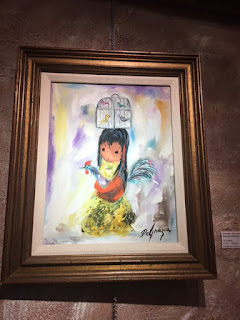 You have to look close at this one to see a thundering herd of black and white cattle.  Different, right?  So we made a right turn and luckily ended up back in the gift shop where we asked for directions to the little Art Show being held by local artists. 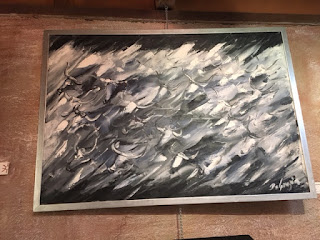 Outside, down a pathway surrounded by tin can flowers, we ended up at a tiny building where they were still getting set up.  Pat has oil painting experience.  I have nothing and am not the least bit talented.  Still, when I saw these images, it made me want to try.

It happens that Pat was talking to the painter of these two I picked up for a song and found out she's an instructor who gives lessons locally.  Seems they LOVE beginners.  We shall see ....... 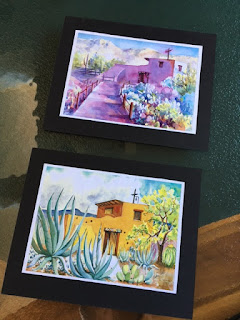 In the meantime, Pat reads my blog and knew I had a problem with the poker table cover.  She knew exactly where to go to find a glass top on the cheap, so off we went to the OTHER side of town to Big Lots.

Now who in the world would think of Big Lots as a repository of table tops.  Certainly not me.  As we wandered around, they said the glass tops were gone, just as I spotted a glass-top outdoor patio table.  Ding ding ding!!!  The light went on.

It said 48" around and I needed 47.  No amount of measuring would assure me it would fit, but I was willing to give it a shot.  Unfortunately, it did NOT fit in Pat's SUV.  Instead, she took me home and I went back in my Jeep that had an opening on the angle of 49 inches. 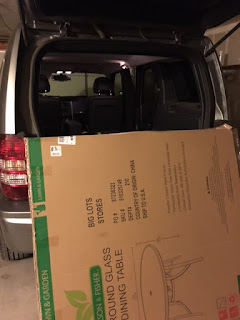 BUT LOOK ... IT FITS PERFECTLY!!  Not only perfectly, but if it were 1/8" less, it wouldn't work at all.  The metal rim fits the table exactly and the bumpers underneath keep it off the top of the table. Problem solved!!  Meet my new dining room table. 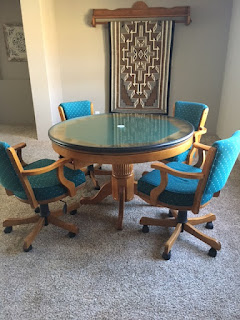 And there's STILL more to come, but it will have to wait until tomorrow.