Flying Through The Air!!

After seeing the last of the rodeo pictures, you will wonder why in the world these guys do this.  It's absolutely crazy!!  Yes it is, but cowboys are a different breed of creature who thrive on excitement and adrenaline.  Not all of course, but bull riders in particular love the thrill of conquering 2,000 pounds of muscle and staying on for 8 seconds.

Eventually they are all going to hit the ground.  Rarely does a cowboy land on his feet.  Here's a few examples. 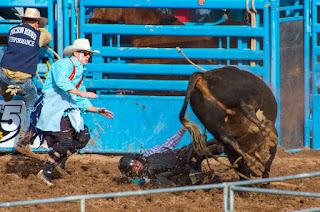 Although these bulls aren't bred to be mean, bulls will be bulls.  When I was a kid on our cow-calf operation ranch having to move the herds from field to field, it was always dicey when the bulls were there.  You give them their space ... a very WIDE space ... because they can knock you and your horse to the ground with ease! 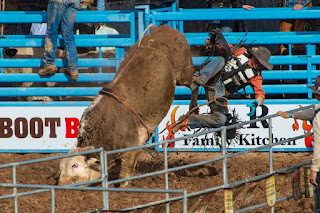 Some riders, most likely those that have had head injuries in the past, will ride with helmets.  Having lost a few cowboys from being gored by horns, they are all now required to wear kevlar vests.  That also saves you from the crushing blow of a hoof landing on your chest. 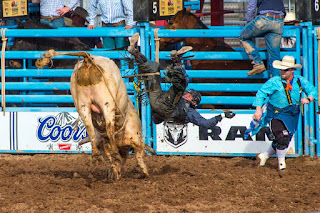 Eight seconds is all it takes to win the money.  Since this is the biggest draw to a rodeo, they win the biggest pot.  Like saddle bronc riding, there is just a strap going around the chest of the bull with a handle in the middle.  The end of the rope holding it on is wound around the hand in a particular way so it will come undone when you let go. 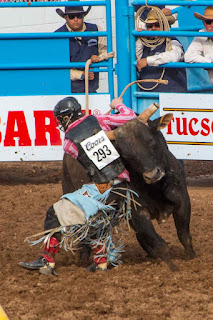 There's a suicide wrap that some use ... like this kid ... that doesn't come undone.  VERY bad news.  The clowns jump in and try to release the rope while keeping the bulls attention on them and not the kid ... all the while spinning in a circle.  Do you think this kids hand hurts?  After about the third turn around, the clowns released the rope and kept the bull away from the cowboy. 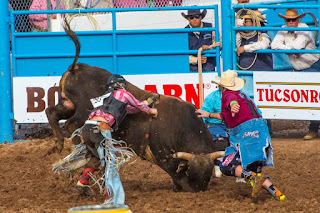 The scoring is the same as for horses.  Half to the bull, half to the rider. 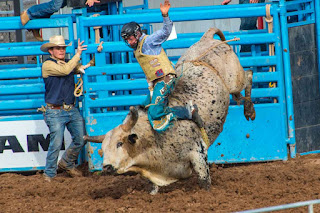 The clowns ... even braver than the riders in my book ... can also help with the score.  Bulls will chase movement.  If he's not bucking very well, the clowns will move around so the bull will chase them, resulting in a higher score.  Same thing for when the rider goes flying off.  The clowns job is to keep the bull's attention on them until the rider gets back on his feet heading to the fence.  Yeah, I'd be running too! 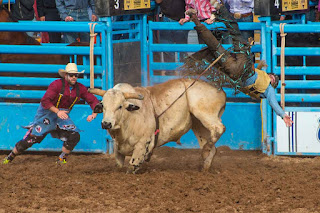 Flying through the air ....... Sometimes they go through all this for nothing.  If your free arm touches the bull (or the horse) at any time, you get a no-score. 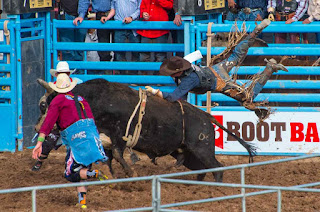 This was a pretty close call.  The rider was hooked (that's what they call it when a bull throws his head and horns at you) a couple times before the clowns stepped in.  I can't tell you how many lives those clowns have saved.  I bet this guys adrenaline was pumping.  Notice just for that reason, all of the bulls horns are cut back. 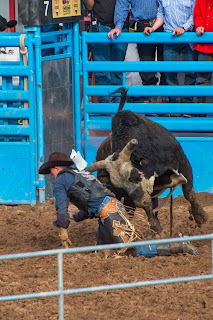 In between rides, there's always one clown that does a little show and cracks jokes.  In this case he was Michael Jackson, but had a little trouble doing the moon walk in the deep mud. 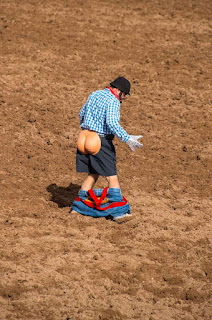 Now THIS is an athletic bull.  Look at that baby buck!!!  For being a couple thousand pounds, these guys can really throw their body around. 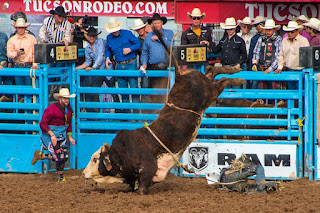 These three images show a pretty good wreck ... one you really don't want to see at a rodeo.  The cowboys hand was stuck just long enough for the clowns to come in. 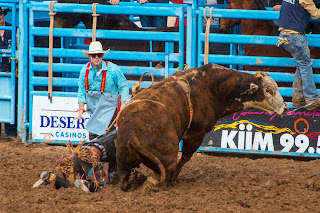 The clown grabbed the guy and tried to help him up, but the bull swung around and nailed them both.  The blue shirt is the clown, the legs are the cowboy's. 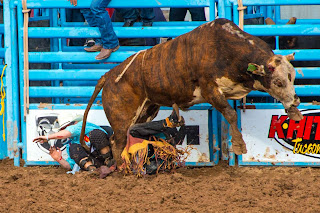 As the bull lost his footing and fell back, he trapped both men under his hind legs.  Although a little cut up, the clown was okay.  The cowboy, not so much.  He had to be carried out.  Just goes to show that the bulls always have the advantage, kevlar vest or not. 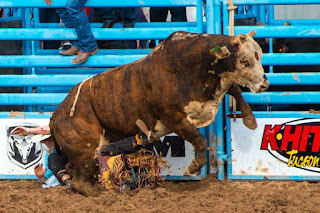 One last picture of that sweet bull face.  Rodeo contractors provide all the animals for these shows and will be heading off to the next rodeo on the circuit.  Good luck to the cowboys next in line to ride these 2,000 pound behemouths. 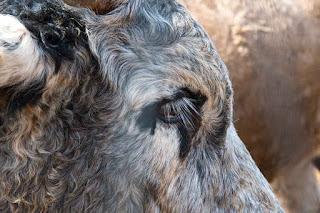 Back to the Lost Horse Ranch, with the Chance house torn up, I offered dinner last night.  Turns out there was a bit of a glitch in the flooring renovation and the entire project got stopped before it got started.  Something about leveling the surface first.

So I figured I better cook an amazing dinner.  Okay ... I was just hoping everything got done, which it did, but only because I turned the oven up to 420 on those baked potatoes.  I was so excited about not burning anything, I forgot to take pictures. 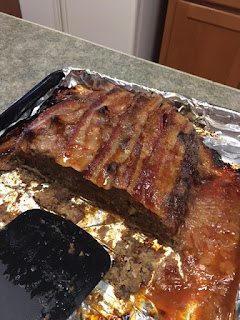 Meatloaf, baked potatoes, corn, salad, bread and cherry pie with ice cream for dessert.  We were all stuffed to the gills!!

In the end, a solution to the flooring problem was found and hopefully they are back on track.  In the meantime IT'S SNOWING AT MY HOUSE!!!  Pat J said it was going to snow and she was right.  At 5:30 this morning, it was coming down in my yard when I let the puppies out.  Of course it didn't stick, but thankfully melted right away.  I think we're in for some COLD weather this week!!

Posted by Nancy Kissack at 6:00 AM