Nick Foles is a hero in Philadelphia.  He's pretty much a hero in Arizona too, since that's where he played football ... the University of Arizona. 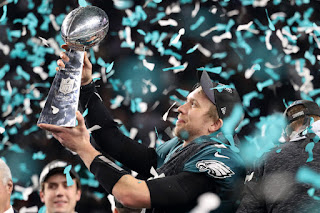 I'm not really a big football fan, but when there's not much else to do on a Sunday afternoon, it's an okay way to pass the hours.  When it comes to the year end championship game however, you'll usually find me watching.

I can tell you one thing ... there was no kneeling at the game.  I was worried I would have to go home rather than share the good company of neighbors, but everyone stood before the flag and no one raised their hands in the air.  I'm glad someone with common sense took control.

There are always those crazy plays that make football fun.  One player tried to jump over another in an effort to miss the tackle, which might have worked had the tackle-er not stayed upright.  That was embarrassing!

The best play was when the quarterback pretended to be a player and had someone else throw the ball to him as he crossed into the end zone.  TOUCHDOWN!!  Unfortunately for the Patriots, their shot at that play didn't work.

It was fun to watch the Medal of Honor World War II Veteran toss the coin.  He said he had been practicing, but nerves can be a bad thing.  The coin went wonky and almost hit a player.

I have to say this is the only time I actually look forward to the commercials.  There's no bathroom breaks in the Super Bowl because the commercials, at $5,000,000 for 30 seconds, are the most interesting part.

I was totally disappointed.  There were several I couldn't understand at all.  What was the point of THAT?  Not to mention the language ... with so much rapping, you couldn't pick out a single familiar word.   Worst Super Bowl commercials EVER!!  The only good one was for Jeep (chased by a tyrannosaurus rex) and there were only laughs in the Chance house ONE TIME!!

WAY WAY too much "kumbaya" going on.  I know, we should all get along and treat everyone the same, but they went overboard.  Apparently the advertising agencies all got the memo at the same time.  I wanted some AWWWW look at the puppy or the Clydesdale Horses, or maybe a beer ad frog ..... SOMETHING!  Alas, it was not to happen this year.  When Alexa lost her voice, I chuckled, but that was about it.

You'll be happy to hear my first time ever 7-layer dip came out okay, although I thought it needed some spicing up.  At least no one got sick that I know of, and Dan liked the sticky toffee pudding, which is a story for another day.

So CONGRATS go out to Nick Foles who thanked God first, for an exciting, action packed game from start to finish in the last 60 seconds.  Best football I've seen in a long time!!!!