I think it always pays bigger dividends to be SWEET rather than SOUR, but at my age, sour seems to come before the brain engages.  I hate calling services that don't provide much service, especially when they change your programming and increase your bill.  You know who it is.  I had to call Dish Network.  Whether Dish or Direct, they're just the same in my book.

All of a sudden, my three favorite programs disappeared and the email I received said my bill was $10 higher.  How can that be?  At least when someone answered the phone, they spoke English and without the accent I can never comprehend.

After a long conversation, the gal said she could offer me a credit until April 1 ONLY.  My mouth tightened up like I just sucked on a lemon.  Are you kidding me?  You took away my favorite programs and you're going to give me a $10 credit for two months only?  That doesn't solve my problem.  It's costing TOO MUCH!  Well then she said ... I won't give you a credit at all!!!  As sweet as I could muster, I asked to speak to a Supervisor.

Finally my brain kicked in and blond Nancy came forth with a big smile on her face.  David ... I'm retired, TV is my LIFE, what can you DO for little ole me?  To make a long story short, I got a guaranteed two year contract for $20 less a month with the same programming I had before.  I hate haggling ... it takes weeks off my life.

To ensure that sweet Nancy remains that way, I decided to eat lots of cake!!  This is a new recipe I wanted to try ... a "professional" one.  Guaranteed to be the best most moist chocolate cake EVER. 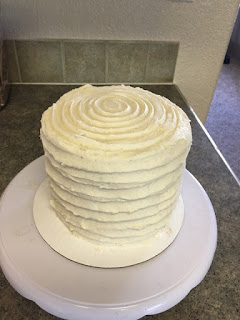 I was pretty worried when the batter came out very liquidy, but I poured it in my three 6" cake pans.  Hmmm ... there was quite a bit left over.  I dumped it into one more huge cake pan and baked all four.  Amazingly, every layer came out as level as can be.  That's a first ... but OH NO ... no cooling racks!! Think Nancy, think!  I took the racks out of my oven and laid them over the sink.  Perfect!  This is actually only TWO layers, each cut in half. 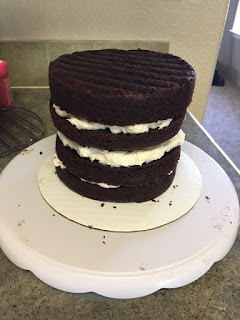 The frosting called for cream, but of course I only had milk.  That was worrisome until I spotted the whipped cream.  It's cream, right??  I thought to mix it with milk, but instead emptied the entire can of "cream" into the bowl and started up my trusty too-small mixer.  It took forever, but I had the best tasting frosting I've ever eaten. 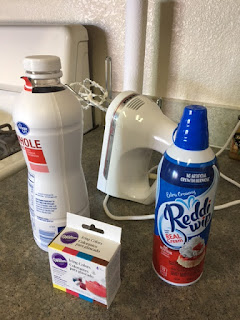 I should have left the pink sprinkles off the top, but I like sprinkles.  I also like the chocolate seashells my baker friend made.  Now for the taste test.  Truly, it was the best chocolate cake I've ever had in my life ... and I've had a LOT of cake!!   Too bad I'm on this crazy forever diet and can't each much of it. 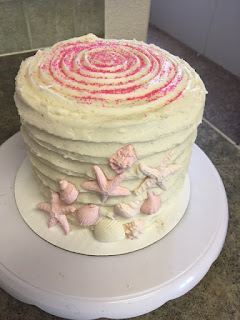 HOWEVER ... it's going to be cake for breakfast for me before greeting Injoy at the front door to remove some old furniture left by the previous owners.   Then I'm hitting the treadmill to burn off some of that cake!!

As I stepped outside this morning, it smelled like rain.  I just love being in the desert!

Did you know Arizona grows enough cotton each year to make more than one pair of jeans for every person in the United States?  They are also the largest producer of copper, more than all the other states combined.