Back at the rodeo grounds in perfect sunny weather, calf roping was up next.  Due to the way too soft dirt and mud in the arena, only one cowboy caught and tied his calf.  Here's the thing ... they disc the arena to a depth of about six inches.  Everything below that is left untouched to allow good footing under the horse AND the cowboy.

Unfortunately, due to so much rain (over an inch) in the last two days, the arena was disced WAY too deep.  The poor calves couldn't gain enough footing to run, nor could the horses.  This guy caught the calf, but couldn't lift him in the soft mud and got a no time.  Only ONE calf roper got a time.  That was good for him, since he won the day money.

Cowboys who place every day win money for their trouble, plus the chance to ride on the final day for even more cash.  Some of these guys make hundreds of thousands of dollars.  Some don't even make enough to buy dinner. 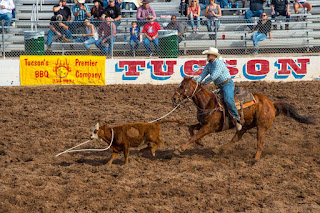 You would think this nice soft mud might make a nice landing zone ... and you would be right!!  Trouble was, the horses couldn't do much buried up to their hocks.  The total 100 score is broken down into two sections.  The horse is scored up to 50 points for how he bucks and the rider is scored up to 50 for how he rides.  Add it up and that's your total for the win. 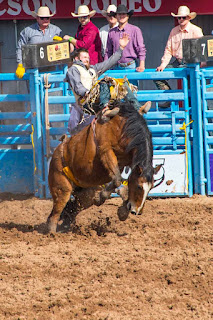 If you got bucked off however, you had a nice soft muddy landing!!  I love this picture below.  It's amazing that horses can jump and buck this high while remaining so calm.  His eyes are quiet and his ears show just how relaxed he is!!

The rider is pretty relaxed too!  That is NOT him in the green shirt.   Look closely.  The rider is laying flat on the back of the horse.  In the old days, you wouldn't be caught dead doing this. 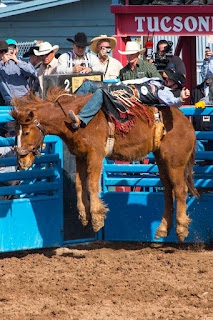 It was a tough rodeo for both the horses and the cowboys.  I mean really, look at this poor horse's back legs buried in the mud.  I felt bad for them since I'm such a softy for animals.  Notice the riders hat hitting the ground between the horses legs. 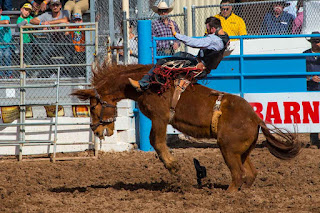 And here's your winner.  My new Canadian friends will be happy since that's where he's from.  Also the only one to ride with his sunglasses makes him pretty cool!!  There was no laying back here!!  The funniest part was when he took his winner's ride around the arena on a borrowed horse that bucked the entire way.  Yes, he rode that one too!!  And really good looking to boot!! 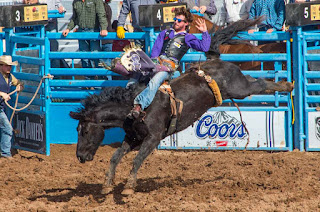 That's more up MY alley since I've ridden a few bucking horses in my time with only the reins to hang on to.  This horse came out with a bang, but again it's hard to get a good score when your hind legs are buried in mud!!  Okay, I admit, most times I'm rooting for the horse, not the rider. 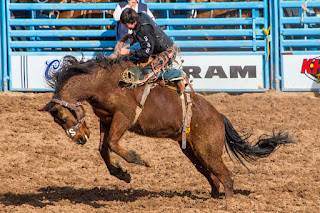 The guy in the striped shirt is one of two scoring the ride while trying to keep from getting run over.  He had just as hard a time running through the mud as the horses did! 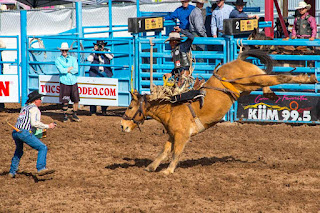 There's always a little stage fright.  Once this happens, the guys quickly close the gate and the rider crawls off.  There's nothing worse to mess up your timing, not to mention that the longer the horse bucks, the more points you get, so sitting in the chute lowers your score.  He got a re-ride. 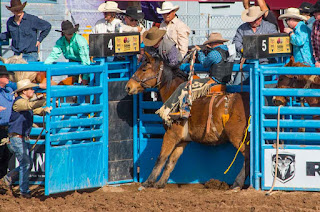 Here's the perfect example of just how important that arena dirt is.  This is one of the world's best bucking horses, which you can obviously tell from looking at these pictures.  Right off the bat, his front feet slipped forward so far that when he put his head down to come back up, he hit the dirt. 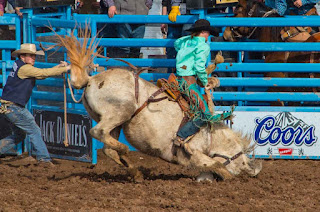 Here he is two seconds later.  Not hurt at all, he continued to buck like crazy.  I can't believe this guy rode this horse.  It was amazing, making the audience scream and yell!!  I also can't believe he didn't score higher. 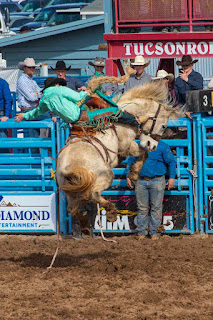 That had to have been one of the best rides for both horse and rider I've seen in a very long time.  Although he could have taken a re-ride since the horse fell (sorta kinda), he chose not to.  I wouldn't either if I stayed on him the first time.  What an amazing animal this one is!! 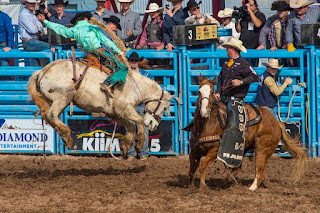 And it's not over yet!  There still bull riding!!!

Today the Chance residence is taking their lives in their hands and coming to dinner at my house.  They are having their entire badly installed tile floors removed and replaced with beautiful flooring.  Literally, they are moving their entire house contents to have this done.  I figure the least I can do is try to cook for them!!  Wish me (and them) luck!!