They say if you don't like the weather, just stick around and it will change.  The views in my back yard fall into the same category.  It's amazing how a few clouds can make for dramatic scenery changes in this and the picture below. 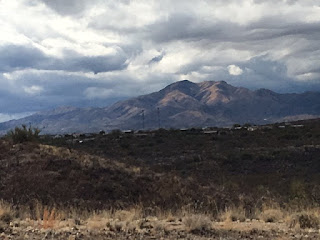 I stayed up WAY too late last night just to watch the Russian Women in the Figure Skating Competition.  They are the best in the world, with the highest scores in the history of skating.  The really old skater at around 18 or 20 years of age, was just spectacular.  The up and coming FIFTEEN year old beat her for the first gold medal for Russia.

You've all heard of the drug scandals regarding Russian athletes, well they got caught big time during the last Olympics and were completely banned from this year's events in Korea.  The only Russians allowed to be in the Olympics were those who without question, passed the drug tests WAY in advance.  Thank you Olympic Committee for finally taking command.  If you get a chance, watch both performances.  You probably won't see that kind of incredible skating for many years to come. 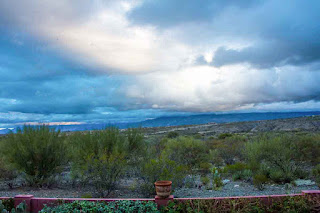 Back to the rodeo, I forgot to show you my latest acquisition.  Every year they have an artist, all local people I think, paint and/or draw a picture.  In the past, most have been black and white, one of which I have rolled up ready to frame.  Do you know how much it costs to have a poster framed?  It was enough, even at Michael's, to put it on the back burner.

THIS year as we walked around, I had no intention of getting another one due to the cost.  That's when I saw THIS!  Wouldn't you know,  they decided to have some framed in wormwood.  The entire thing was cheaper than just the framing of the other poster, so it came home with me.

That meant moving what little furniture I had in the living room around, so this would be the centerpiece over the couch I don't have yet.  I have to say, that huge treadmill was a bear.  I got it about halfway across the room before finding out just how heavy it was.  I couldn't slide it sideways into the window bay.

I figured those moving pad things would work, but I didn't have any.  My brain actually kicked into overdrive.  I got two pieces of heavy cardboard to slide underneath, but couldn't lift it high enough.  Thank Nancy, think!!  A shovel?  No, not strong enough.  Ding Ding Ding!  The light bulb went on.  I grabbed my trusty claw hammer from the drawer, worked the end under the bar and pulled back.  It came up just enough to slide the cardboard underneath.  Chaulk one up for Nancy. 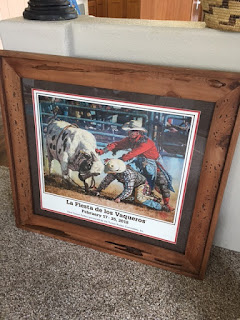 While all that moving was going on, I was contemplating the bedroom carpet.  A quick trip to the Chance house netted a box cutter and I went to work.  The main concern is a level floor.  Unlevel will cost a lot more.  After figuring out the prices of carpet ($4.54 a square foot installed) and laminate ($2.00 a square foot installed plus the cost of leveling) and in the end, it just might be cheaper than the carpet!  Would't THAT be exciting!!

If I'm lucky, the guy will stop by today for a look see.  In the meantime, the Chance house looks amazing.  It's not costing them as much as they thought, since the newest Contractor said it would not be a problem to put laminate over their tile once it was all leveled.  That dropped a big chunk off the top of the price for them. 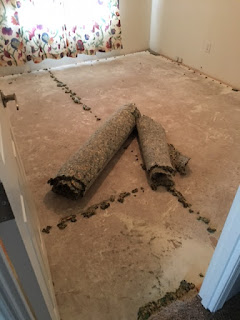 Trying not to think any more about the house, which ends up costing me even MORE money, I went to sewing on the newest quilt.  Put on your sunglasses, because here's the start of something pretty bright. 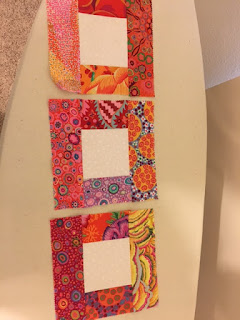 With two hours cut off my sleep time last night, I'm pretty groggy this morning.  I see an afternoon nap in my future ... and I NEVER nap!!!  Let's see ... I need a glass cover for the poker table, a guest bed, tile steps repaired, the fireplace changed over to gas ....... the list goes on!!