The Second Mission ... More To See

This is Calabazas (sound like a squash?) that is probably named after the wild coyote gourds that used to grow in the area.  After a Pima Indian uprising against the Spanish in a neighboring valley in 1751 causing the villagers to scatter to the mountains, one Priest decided to create this mission up on a rocky dry ridge, the better to see you coming.

Unfortunately, that meant they had to carry all their water and walk a long way to their fields below near the riverbed.  When workers were gone to the fields, the Apache took quick advantage, raiding their food supplies.

Pretty soon, the poor villagers were carrying all their worldly goods to the fields with them, like their furniture and even their chickens.  They figured out pretty quickly that this was NOT the place to be and moved closer to the Tumacacori Mission for protection.

After another long drive to a roadside pullout, we walked about a quarter mile before turning up a steep hill and heading down another road for not quite half a mile.  Here's what we found, surrounded by chain link fence and razor wire.  Thankfully, they are trying to save the remains of this mission.

Again, there was a tall adobe fence around the entire grounds with only one entrance, the depression you see here. 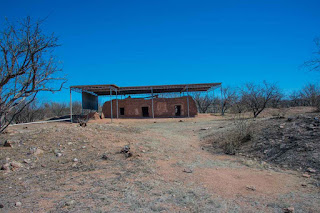 Situated sideways to the entry gate, this was the entrance to the church itself.  Once mostly abandoned due to Apache raids, the Governor of Las Cruses illegally purchased the property (basically stealing it from the Indians) and turned it over to a German group who ran a cattle ranch.

They immediately plugged the entrance door and added several interior walls to make it a bunkhouse for the ranch. 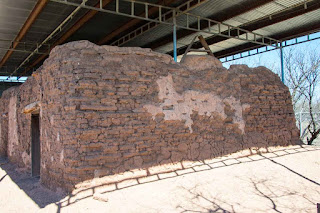 Sorry for the pole .... they are in several images holding up the cover structure.  You can easily see the plugged entrance here. 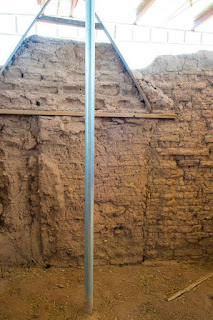 This is a rather short doorway, you have to bend over to get through.  The melting of the adobe has added about three feet to the floor.  The overhead timbers still show the axe marks from when they were cut and laid over the doorway. 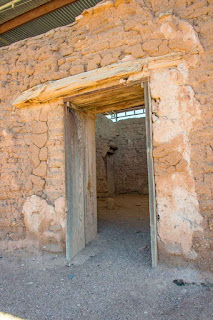 Immediately to the right inside the main doorway was a fount that held Holy water.  Dig out three feet of dirt and you would see the entire thing, along with the whitewash that once covered the entire building. 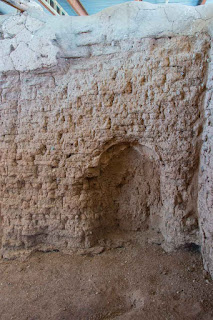 The ranchers used rocks in several places instead of adobe bricks.  Imagine this plug gone. 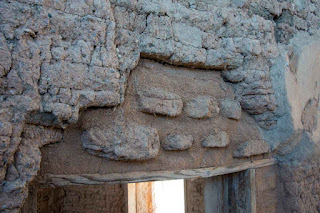 The outside wall has disappeared completely.  I'm standing looking to the left where the Priest would stand as he preached to his people kneeling in the sanctuary.  The half wall is another plug the ranchers put in.  Here you can still see some of the original whitewash on the wall. 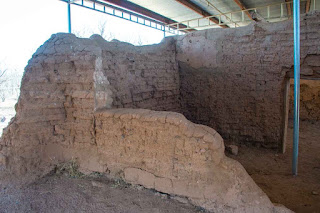 Looking to the right of the sanctuary (again with a half wall) would be where the Priests stored their accouterments for the services, things like silver candleholders, etc.  If you want to see an example of what it might have looked like, the next Mission will give you a much better idea. 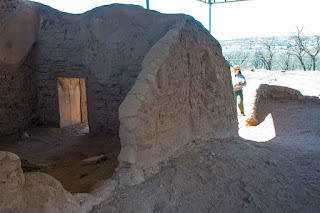 Once again the political climate changed until Calabazas was included in the Gadsden Purchase and became part of the United States Territory.  In 1756 the U. S. Military set up Camp Moore and the Treasury Department immediately set up a port of entry here (no surprise ... taxes), using the church as the first Customs House.

Another rock structure was built on the property (one the Ranger seemed to ignore completely) and was used as a post office of sorts by the military.

The only thing that didn't change were the Apache attacks, right up until Geronimo was sent into exile in 1886.  By then, the railroad had arrived down in the valley and the little church on the hill was abandoned.

Next up ... the third Mission ... another amazing example of not doing much at all to save an amazing piece of history!!