I'm pretty much an animal person.  Have been all my life.  Growing up on the ranch, I had pet dogs, pet cats, pet horses, pet calves and pet chickens.  I petted everything!!  Since then, I just can't seem to be without animals in my life, which is why I ended up with these two.

I didn't pick them, they picked me.  Miss Jessie here was five when I got her.  If you didn't know, Jack Russells are the weirdest dogs ever.  It took three months before she would sit with me on the couch and she growled at everything, me first and foremost.  It's her way of communicating I guess.  She is also ridiculously possessive of everything from me to her leash to her blanket.

Once she decided she was stuck with me (dropped off by friends who never found her a forever home) she became my best buddy.  Not the least bit rambunctious, she just curls up on the couch most of the time.  That is unless there are kitties around.

Miss Jessie HATES the K word, which I never speak out loud.  Last year on the Oregon Coast, I found this cool k-i-t-t-y (you have to spell it) for Lost Horse Ranch.  It's the perfect kind ... no food is involved.

Cooper was the first to spot it and started growling, something he learned from Jessie.  In no time, both were growling at the glass door.  When I opened it, Jessie made a beeline for the kitty barking and growling with teeth glinting in the sun.  She did a great sliding stop when she realized it wasn't real, bumping into the head.  What a sheepish look she had on her face. 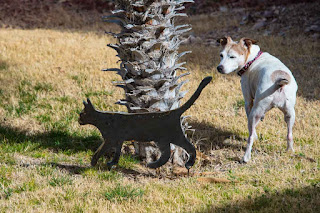 Not to be outdone in the "buddy" department, Mr. Cooper sticks his head under my arm and just sits there making tiny growling noises until I sit back on the couch where he can snuggle up to my leg.  These critters ... they have me so well trained, but are the best company in the world.  Too bad I can't teach them to take out the garbage or vacuum the floors. 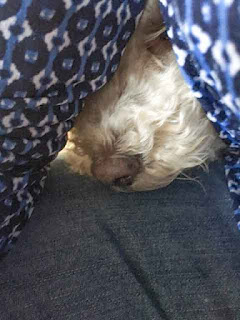 I stayed home all day yesterday waiting for the Pest Control guy who never showed up.  Since finding a nice hole in the siding of the house allowing easy access to my "basement", I was sure hoping he would tell me there's nothing to worry about.

Instead, I worked on the quilt and took a few outside pictures, none of which I have processed yet.  So here's another boring quilt picture.  This is how the block starts out, sewing pieces together to make it "askew" and crazy looking ... like a bad morning after.

Once ironed, I then cut it down to size.  That's easier said than done.  Sometimes it's not wide enough and I have to figure out how to add more while keeping the integrity of the shapes.  MUCH harder than I thought it was going to be. 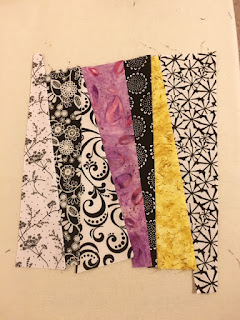 Honestly, this is the weirdest quilt I've done in my life.  I'm SO traditional and this is SO modern.  I only have THIRTY more squares to go!!  Woohoo!! 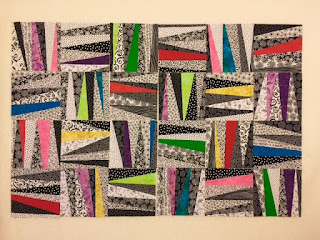 I'm definitely NOT staying home today.  I've got a list a mile long of important things to acquire, including sonic rid-a-rat contraptions that the neighbors swear by, some bird seed for the quail and a small table for my bedroom to cover up the TWO television connection things that I keep stepping on.  OUCH!!

By the way, desert pack rats are notorious for getting into the engine compartments of vehicles and destroying the wiring, not to mention everything else they can get their teeth on.  I have solar lights under the diesel engine on my rig that blink at night.  So far ... knock on wood ... I haven't been bothered.  That doesn't mean they aren't around, so BEWARE!!