When did poker become so complicated?  I've never been a gambler, not even slot machines.  I would much rather say "look at that chair I bought" than "look at all that money I threw away", even if I had a good time doing it.

Last night's friendly neighborhood poker night wasn't like that at all.  For $5 you get a bundle of chips to blow on the craziest games I've ever heard.  Elevator, Woolworths, Baseball, Seven Seven and I think Cinderella were some of the weird ones.  Who knew there were so many ways to lose money?

Miss Shirley kicked butt so many times we thought maybe we should play musical chairs so someone could pick up on her luck.  That's when we broke for dinner.  Good heavens, I already ate an entire cow's worth of appetizers and now there's dinner?

Finally, this is the last of the Indio Rally ... the model Railroad Open House.  These amaze me for the amount of work involved (what a great hobby if you have room), and if you don't, you can come here and work on this one. 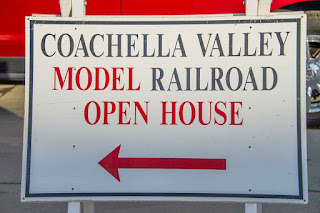 The first thing you immediately notice is the thunder clouds, the rain and the lightning.  Yup ... they have lightning!  Crazy, right?  Talk about imagination!! 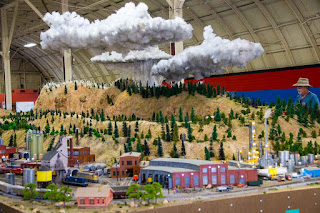 As I walked around the entire layout, maybe 30 by 75 feet, the detail I saw was spectacular.  Many of the signs flashed, as did this Greyhound Bus terminal sign. 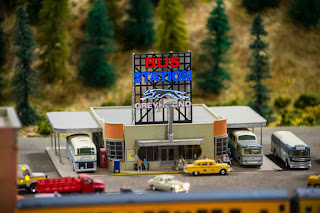 Here's a ship unloading container cars along with a tugboat keeping him straight.  There are so many vehicles, people and critters roaming about I couldn't count them all. 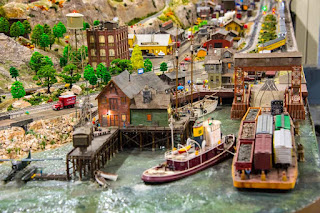 Another first ... a house afire with the Fire Department coming to the rescue.  I just can't imagine the hours it took to make up these scenes. 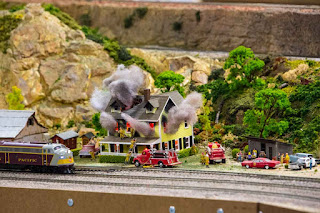 They even had fall foliage and hot air balloons.  Bet you never thought of THAT one!! 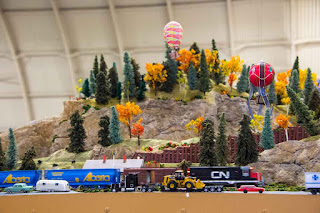 I just can't imagine where they find all the things shown ... coke machines, luggage, train station trolleys ... it's incredible, not to mention someone made most of the buildings. 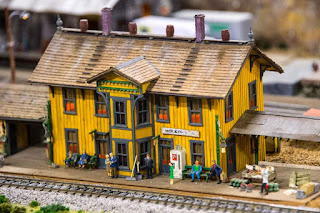 Even down to the oil refinery, the detail just boggles the mind.  Inside the tracks is a walkway where the members walk around with their controllers operating their personal train along the tracks.  As the train moves around, the member moves his controller to the next station. 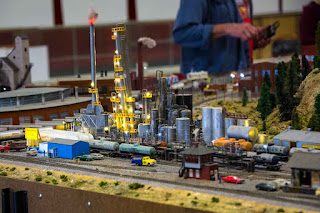 Here's the final down and dirty ... you can't have an authentic train line without someone mooning the train ... and HERE IT IS!!!  You really have to look to spot them.  I just caught a glimpse as a fast moving train went by.  Where do they find this stuff????? 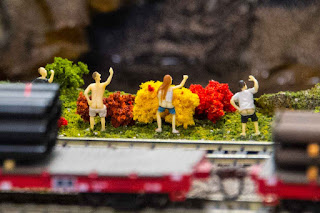 Between mooning, waterfalls, hot air balloons and the oil refinery, I was certainly impressed with this setup.  If you ever get to the fairgrounds in Indio, check it out ... Building 7.

My cheapy thermometer outside says it's 20 degrees.  I'm sure that's wrong, but it certainly feels like it.  My REAL one says 29 this morning.  YIKES that's cold!!  I DID want to be at 3200 feet during the summer to escape some of the heat ... I just forgot about the winter time cold!!

Hopefully it warms up quickly today ... I've got lots of pruning to do in the back yard.