There Are Just NO Words!!!

No words at all that can describe the last two days, other than UGH and OH NO!!!  I'm not very good at being sick.  I get grouchy easily!!  So I'm taking my pills like the good doctor ordered, and my head opens up like a floodgate.  The bad news is while that makes the head better, the throat is now almost as sore as my ribs are from coughing.  I lost my voice immediately ... but I felt better ... kind of anyway.  In fact, after laying around the house for an entire day, I thought I felt good enough to make the trip to Glendale.  Silly me ........

I waited for the light to go out before cranking it up ... it was 36 degrees ... and started the engine to be greeted with a huge CHECK ENGINE!!! warning light.  NO .. NOOOOO!  There are no words to express the trash that came out of my mouth.  The heck with it ... I'm hitting the road.  I headed North first to find fuel at a nice $2.90 a gallon (at which time the check engine light went out) and took off into the sunrise.  Why the sunrise you ask?  Because my coughing kept me up half the night until I took an allergy pill to counteract the flood of drainage.  Still awake by 4:00 am, I just got up, finished packing the rig, threw the dogs in and hit the road. 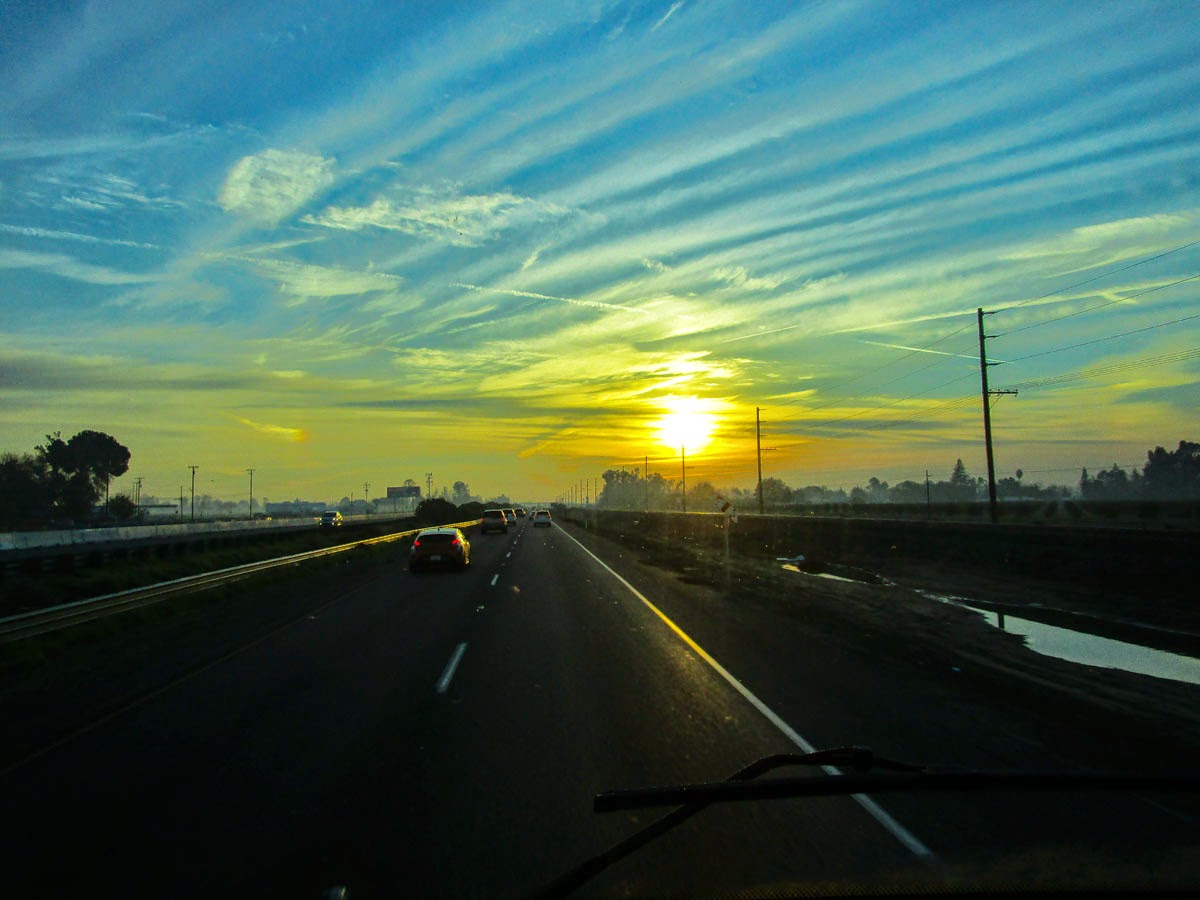 It was actually a fairly nice drive, made MUCH better by the fact that the State of California has FINALLY finished most of the roadwork.  As I came up to the Grapevine I saw the sign warning of high winds.  Yikes ... I forgot to check the wind advisory, but I'm committed to completing this trip so I can rest at the other end.  Hahahahahha 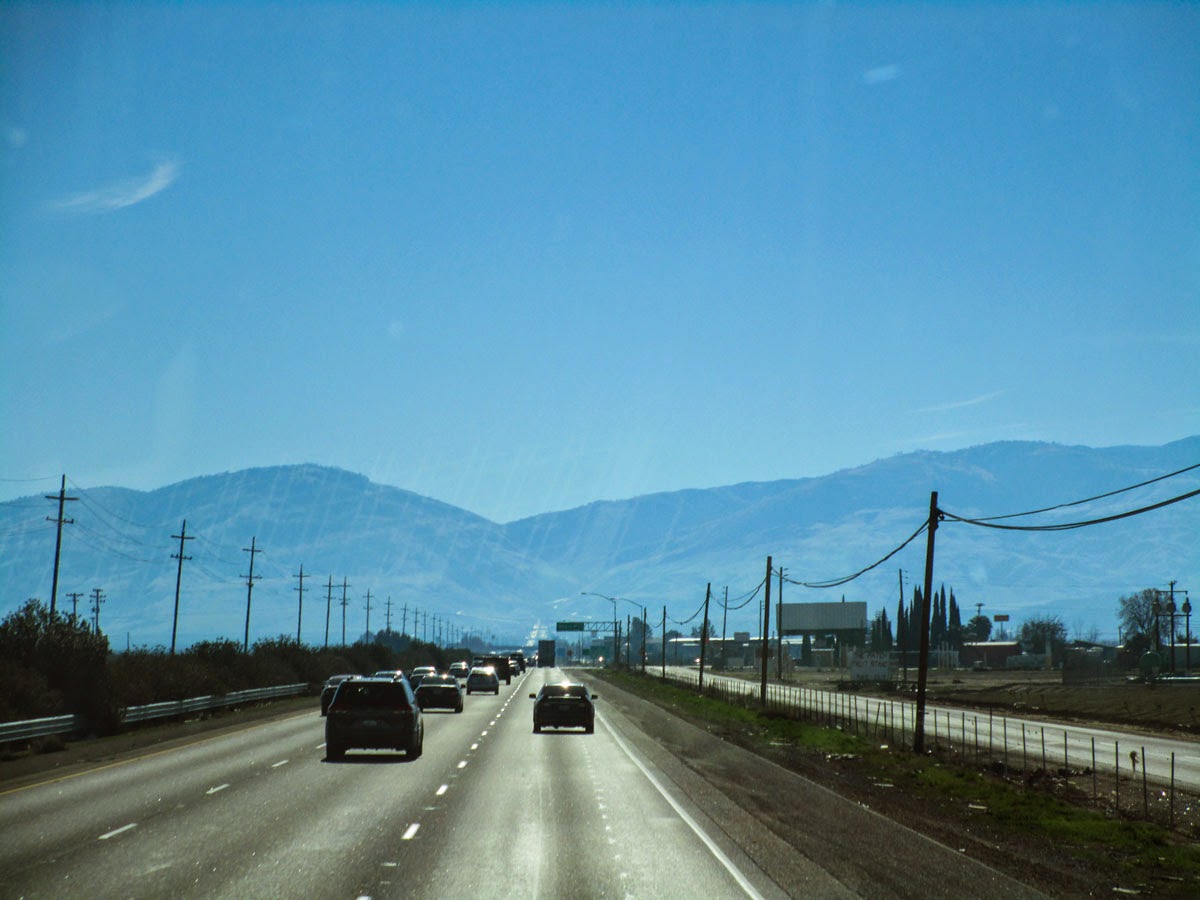 Castaic Lake was spectacular as the morning sun hit the water, as you can see between the white stripes from the still weeping roof.  I cruised along grossly unaware of what was to come.  Traffic was fairly light and I drove right to the front gate.  How cool was THAT!!! 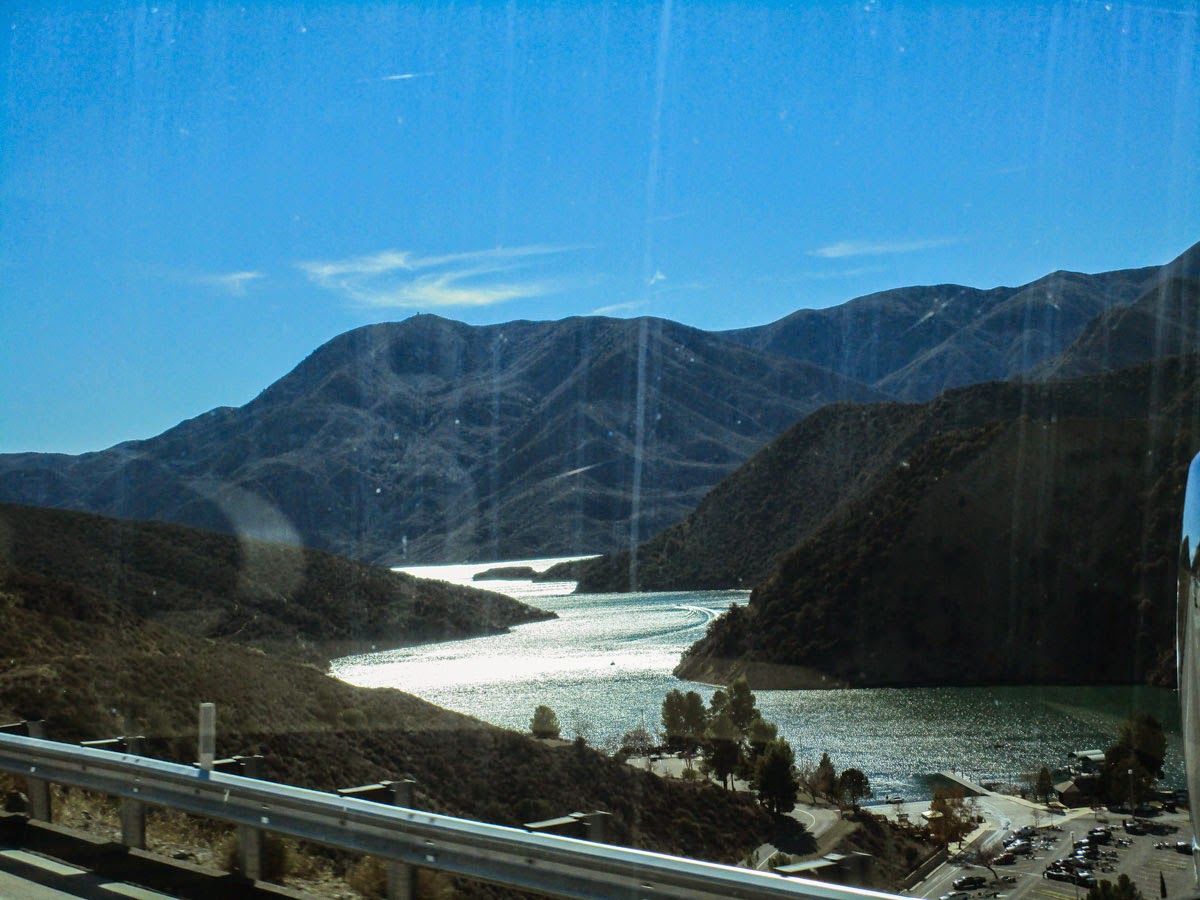 I passed the first driveway and pulled in the narrow second one.  Hey ... they only have four spaces and there are SIX rigs parked here.  What's up with THAT???  We not only made reservations over two months ago, we checked back TWICE and they said they were waiting for us.  Really, you shouldn't cross a cranky sick old lady!!  I made it pretty clear I wasn't the least bit happy, and when he told me two of these rigs had been here over three weeks, I almost lost it!!  So where would you like us to park, cuz we're NOT leaving.  Really, he tried his very best and was as nice as pie, but that didn't count for much ... especially when I found out ALL of these only have 110 plugs.  I know, but would someone PLEASE explain to the Bartenders what a 30 amp service is??

To make it even better, I had to back OUT that narrow driveway into a five lane traffic-filled road, continue to back about 700 feet while cars honked and drivers yelled things at me ... until a nice policeman came along and said to just keep going ... at which time I backed INTO the second narrow gate to my parking spot here.  Let me tell you how fun it is to do all that backing with three people trying to direct you, absolutely NONE of which can be seen in any of my mirrors or rear view camera!!  How is that even possible????  Even the policeman was impressed!!  Chalk one up for Nancy!!!  There are now EIGHT rigs where there should be four.  I could have plugged into a line about 40 feet to the left of this picture ... but it had an open ground.  I ended up attaching my 30 foot extension cord to my fully extended 50 amp cord to a 50 foot 110 cord and barely reached the plug at the very far end by the gate where that tiny white car is parked.  Those far orange cones are mine.  LOL 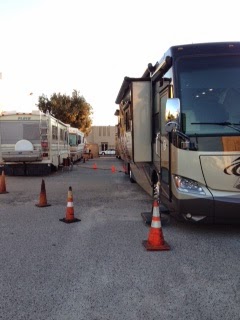 There are three rigs on the left,  Joe and Cyndae (my friends) clear back by the gate about 3 feet from a Montana 5th wheel (totally blocking their satellite) and me, two feet from their front hitch with my slide six inches from the front of their truck.  Hope they don't plan on going anywhere soon.  They mentioned they would be moving to the parade route January 1 for a better view.  Oh I said ... I'm not leaving until January 3.  They weren't the least bit concerned, even after we explained about the reservations.   There are two more rigs parked to the right of me up against a concrete wall. 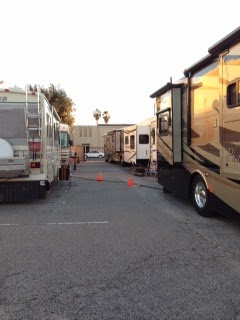 After spending two hours trying to get connected to some kind of electricity, to add insult to injury, I dumped half a box of couscous on the floor ... after I dropped the meatballs on the floor, one of which Jessie scarfed up before I could stop her.

It was 6:30 and I just wanted to go to bed.  I know that's unreasonably early, but no jokes from the peanut gallery  ..... I'm sick and exhausted!!  That's when Barbara called to tell me that the temperature was expected to be 28 degrees.  Wow!!  There are no words.  So that would be okay, because I have a new quartz heater ... except it won't run on 110.  Sigh ... I can't win for losing.  Barbara and Tom, by the way, are parked at the Elks in Burbank, where they too had a reservation.   The Elks will move the guy parked in Tom's spot (with 30 amp) because he doesn't HAVE a reservation.   Too bad there are no rules and regulations here ... on the other hand, that means I can run my generator whenever I want!!!

So if you are ever going through Glendale, just stop in and stay as long as you like ... 2-3 months is totally acceptable they said.  Today Cyndae, Katy and I are going to drive over to the float barns and help out for a couple of hours before returning for a long nap!!!