So HOW Do The Flowers Get On The Rose Parade Floats??

I'm about to show you!!!  First off, yes I do feel much better.  I didn't really think so until yesterday afternoon, but I just might live!!  I can even talk and the coughing is pretty much limited to an hour in the morning and a couple of hours at night.  That's improvement, right???

Bright and early we took off for the Phoenix Decorating float barns where we met Gretchen, who hooked us up with the Western Assets Group.  There are about seven floats in this one building including the American Armenian, Shriners Children's Hospital and the United Sikh Mission to name a few, along with 300 or more people!  Sort of organized chaos!!  There are several bosses on each float, who assign jobs based on whether you want to brave the heights or keep your feet on the ground. 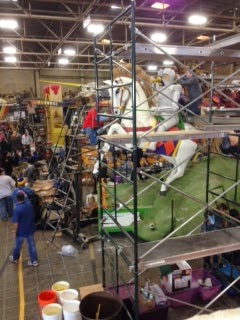 Our first stop was the glue station.  Five gallon buckets of glue are poured into a cup, which you snag along with a paintbrush or two.  At the end of the day, you return the unused glue, along with your WASHED paintbrush.  No brush shall be returned unwashed!! 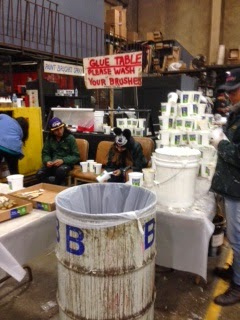 My first station was up this scaffold, atop the octopus arm, covering the two world globes.  This is the Western Assets float with a Wizard, several dragons, a sailing boat and the pink octopus.  The big white blob in the middle is one completed globe, now covered in a plastic bag. 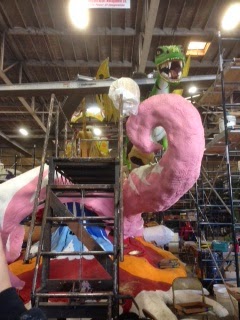 You paint on the glue, then hold a cardboard box full of crushed flower petals underneath, while you scoop up a bunch on a sponge and gently press to the glue.  Easy peasy, right?  On top of the globe, yes, but when you are laying on your side, half off the scaffolding, hanging on with your toes, reaching as far as possible to the other side, it gets kind of dicey!! 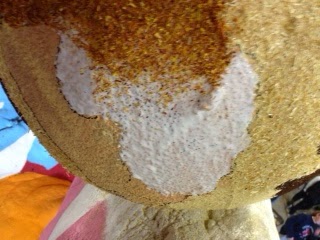 Here's Katie doing the flower press dance with crushed strawflowers.  Some of the flowers applied to the floats need to be so tiny they are run through a blender, and applied with tweezers!! 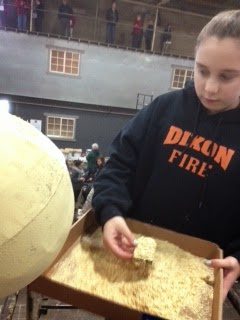 The first product I applied was coffee ... I'm pretty sure I inhaled enough to keep a buzz for half the day.  I've washed my hands five times so far and they STILL smell like coffee.  It may be permanent!! 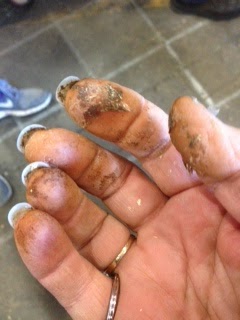 From coffee, I moved to yellow strawflowers, bronze strawflowers and finally ground walnut hulls, most of which went down the front of my shirt while reaching overhead and I've got glue from one end to the other.  What can I say, it was fun!!! 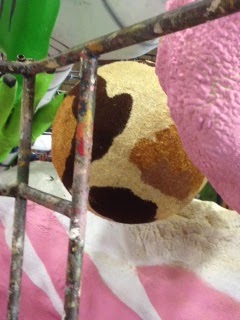 It's pretty much a work-at-your-own-pace thing.  The dragons were covered in pistachio shells, brussel sprouts cut in half, along with nori, the seaweed from your sushi.  While we worked on all that, others cut the petals off more flowers, wired flowers, braided some material and shredded others.  There were lemons and limes cut in half and lots of whole cranberries.  The colors on these floats are all natural and pretty spectacular! 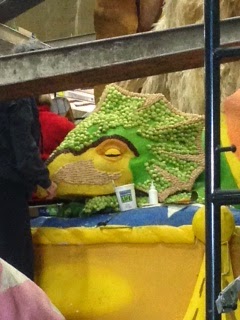 Split peas, whole peas, kidney beans, pepper corns ... all kinds of seeds and beans were also glued to the dragons to give them a rough, bumpy texture.  Here's a box of flower petals, similar to the ones I glued on the globes. 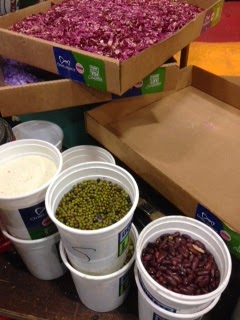 This sign says Thank A Million Teachers ... I don't remember the sponsor of the float, but the knight in shining armor is hard to miss.  Lots of pampas grass and silver leaf, shavings from bark, seeds and nuts are all used to make these floats come to life. 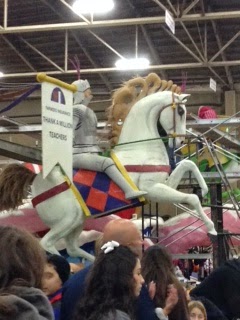 It was funny ... many tour groups are taken through the buildings while we work ... all of which would run up to us and take a picture.  I'm not used to being the one photographed.  On the second story catwalk, better known as the peanut gallery, spectators are allowed to come in and see the progress ... all taking MORE pictures!! 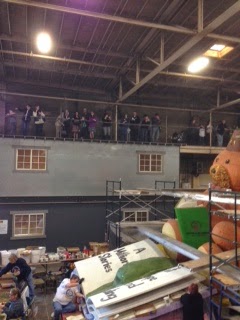 By now, the day has passed by and we are heading to the brush washing station.  This float is the only religious float allowed in the parade, because they have been in the parade from day one!!  This year they are building the Ark with the cutest animals you've ever seen!!  Be sure and look for it! 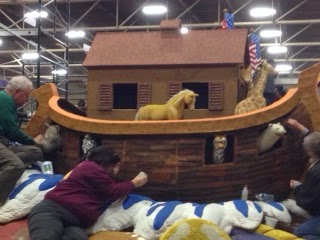 To the other side of us sits the Sikh Mission float.  They have taken enlarged pictures of their group and placed them on the sides of the float and are in the process of glueing on the flower petals.  This float is probably the closest to being completed.  There's not much time left! 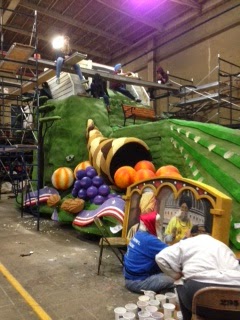 With an achy back, tired feet, fingers that still stick together and smell like coffee, we called it a day and came back to the rigs.  I thought I would get some rest, but since one trailer finally moved out, I was able to move over to a better spot.  You know, put everything away, pull the slides in, etc etc, then set it all back up again!!  Wish I could use his plug-in, but it's the one with an open ground.  We do have the opportunity to move to the Lutheran Church in El Monte, where we would have the same 110 hookup, but decided to stay put.  Most of these people will move to the parade route and our power should improve.

Today I'll take my "real" camera and see if I can get some more "detail" images.

Posted by Nancy Kissack at 6:54 AM