Not really, although I thought it would be.   I try to be prepared and plan ahead, but many times I feel like I'm flying by the seat of my pants with no idea what I'm doing ... just hoping for the best!!  Yesterday was a pretty good example!!

I spent the morning sewing the drapery material for decorative living room drapes.  That didn't go quite like I thought since the fabric had such a heavy weave and each panel is 4 yards long.  It made it very hard to keep the seams straight, despite hundreds of pins, half of which are now stuck in my sewing room carpet.   Now to take down the old hardware and rehang it higher above the window.  The first two screwdrivers I tried didn't budge the screws, so I trotted out to the motorhome and got my drill.  That didn't help at all ... but I finally removed them after stripping one of the screw heads. 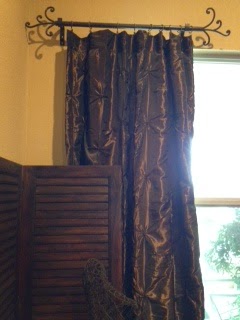 I have to say ladies, this is not as easy as it looks.  The men already knew that, I'm sure!! 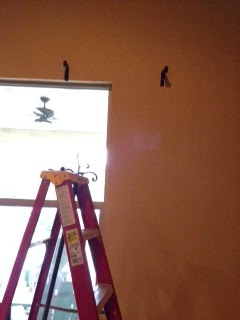 Once the hangars were removed, there were large holes from the whatchamacallits used to keep the screws tight in the sheetrock, since no studs were hanging around.  The whole project came to a halt while I scrounged through my back room cabinets to find some spackle.  The five huge white spots will need to be painted.  Yes, there are five ..... don't ask!! 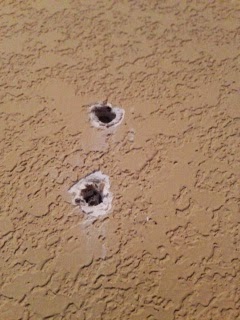 Back on the ladder with tape measure, marking pen, screwdrivers, stud finder (which didn't find any studs in the neighborhood ... wooden or otherwise), hammer, whatchamacallits and screws, I proceeded to measure four times, mark three times and drill twice.  After I picked the drill up off the floor where it crashed briefly, I installed the whatchamacallits and screwed the hangar to it's new location.  I should have planned a little further ahead ... I have four more holes to drill on the other side and no whatchamacallits OR screws.  Sometimes even when I THINK I know what I'm doing, I STILL find I'm flying by the seat of my pants!!!  They're getting kind of worn out in the process!! 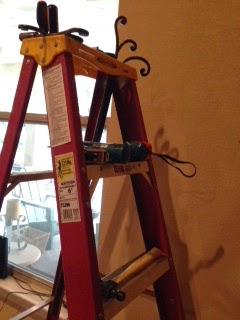 Two hours later I got one set up.  The picture doesn't do them justice with the light from the window, but they look pretty nice, if I do say so myself!!  I still think it's weird that you hang these so high, but that's what the decorator at my local furniture store said, so I'm blaming it on her!! 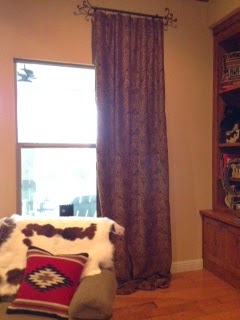 The furniture is in disarray and the ladder the centerpiece of my windows, but I can't do any more until I hit Home Depot.

I was getting kind of hungry, so figured I would mix up that meatloaf I've been planning and get it in the oven.  Recipe??  Who needs a recipe ... my mom always just threw things together!!  So here I was flying by my seat again, when I discovered I have no onions, bell peppers, garlic, tomato sauce or eggs.  Scratch that idea.  As I stared into the fridge and the freezer looking for something edible, I spotted Velveeta and cheddar cheese.  Aha ..... macaroni and cheese sounds perfect!!  Hmmm I didn't plan very well for this one either.  I couldn't find any macaroni, but I had linguine I could break up.  The Velveeta was two months past it's "pull date" and the cheddar had a nice section of black and green mold.  That pretty much killed my appetite, as I went back to my old staple ... taquitos!!  I'm pretty sure I keep the taquito people in business!!  I think it's time to quit flying and do a little more planning.