The nice weather has finally taken flight and landed in Florida.  We are a cold 36 degrees this morning, bringing about a whole new set of worries.  Do I turn on the tank warmers in the fifth wheel?  I set the inside heater at 40 degrees like I used to do in the big rig.  Does that work to keep the pipes from freezing?  Does this RV direct heat underneath like the other one did?  HELP!!!!!!!

And it's going to get even colder over the next couple of nights.  Maybe I should just drain all the water completely until I'm ready to leave.  So many questions!!

Candy usually helps keep the brain quiet, at least for a time, so I hit up the butterfinger drawer.  I'm pretty sure I still have 25 left over from Halloween.  That should get me through Christmas. 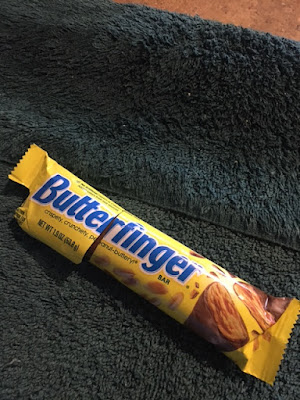 In the meantime, this is the beginning of a new kind of project.  I've decided to take up basket weaving for when they take me to the Looney Bin.  Not just ANY basket weaving, but pine needle basketry.  I think some of that Indian hoodoo has seeped into my veins, having lived so close to Yosemite National Park for so long where this was an everyday time consumer for the Indians.
So I bought a book.  As it turns out, it's a little more involved that I thought.  First, you have to locate pine needles with some length to them.  Around here, they average about six inches long.  The longer the better.  I had planned on several trips to Yosemite to gather the required needles until I learned I would be arrested if I did so.  No kidding!!
The next alternative was to find them on-line ... and find them I did ..... in Florida!!  Who knew?  Not only that, but these needles are a whopping TWELVE inches long.  It's a long process to clean them of dirt and pitch, then dry them without mold appearing.  Mine came already cleaned.
Next up, I have to boil them again to soften the caps, or ends that hold the needles together, usually in sets of three.  Then you scrape off the caps, getting lots of gunk under your fingernails, which is very hard to remove. 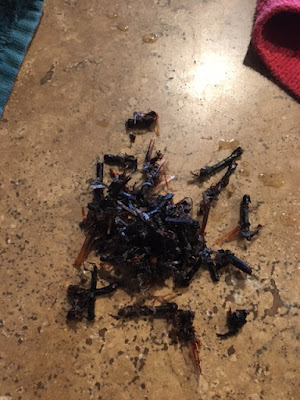 VOILA!!  Here are the needles ready to start weaving. Because the start is always the hardest, you begin work when they are still wet and pliable.  Yeah, this doesn't look quite like the picture.  Turns out it's not nearly as easy to do as I thought or as they SAY it is. 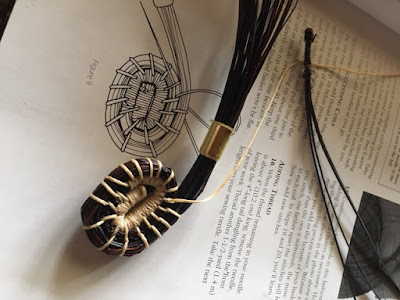 I decided quickly not to worry about the placement of each and every stitch, but just to get something done ... a test run so to speak.  At most every stitch you take with the waxed sinew thread, you grab one pine needle bundle of three and stick it in the gold keeper, moving the keeper along as you sew.
It's actually quite therapeutic, although frustrating at times.  When and where you add that stitch that starts a new row is definitely important, but I didn't find that out until it was twice this size. 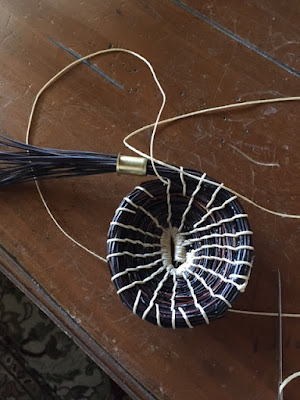 There are several different stitches I'll try as I go along.  As you can imagine, I'll be looking for pine needles on my next trip to the mountains.
The plan is to combine this with the gourds, making works of art.  Ha!!!  Yeah, that's not going to happen.  It will probably end up being something someone will have to throw away some day when they clean out my house.
In the meantime, I finished this quit top and packed it away with the other nine I have waiting for that new quilting machine.  My truck runneth over, as does the storage space under the bed in the trailer.  I'm quickly running out of room. 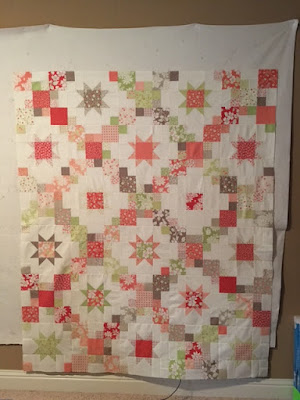 Now that I've finished the blog, I can resume my worry over freezing pipes.  The good news is the forecast for five days of rain next week.  Rain is good, snow is bad.  Pray for rain please!!
Posted by Nancy Kissack at 6:09 AM