First off, let me just say it's a good thing I burned that Ritz-Cracker Candy.  I did try to save the middle part that didn't look too bad, which of course meant I had to eat it.  Whoa Nelly!!!!  It had the perfect crunch with the caramel having dropped to the bottom, then the crackers covered in chocolate.  I went back FOUR times to get another piece the first day.  That stuff is addicting!!!!

I'd show you a picture, but by the second day it had all magically disappeared.  I may just have to try that again.  I found the problem, the first recipe said to cook it 13 minutes.  The second one I found said FIVE. I'm going with five next time.

Being in the Central Valley, we were socked in with fog half of the day.  It's nothing like it used to be in the old days, but few people are still alive to remember just how bad it was.  Nowadays, no one really knows how to drive in fog, so rather than get in an accident, I stay home. 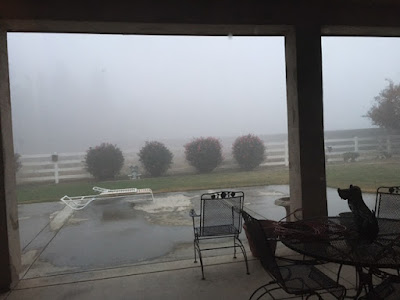 That means some time is spent looking at the recent accomplishments of fellow RV'ers.  Here's the first MUST HAVE!  This is the exact same rig I have.  The top right image shows an electric fireplace stuffed into the space where two drawers used to be.  It fits perfectly with no modifications other than drilling one hole for the cord. 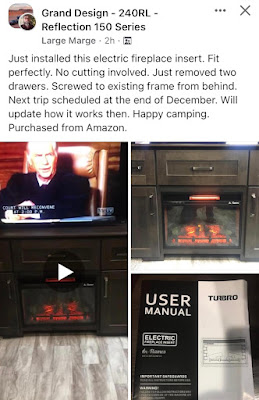 It runs around $220 from Amazon.  What say ye?  It sounds like a great heat alternative at night over the roaring of the on-board heater/ac system.  I even think I could install it.  I have two questions.  Does it get too hot for the surrounding cabinet wood and do you think it will last going down those rough highways.  It will be located forward of the axle if that makes any difference.  I WANT ONE!!! 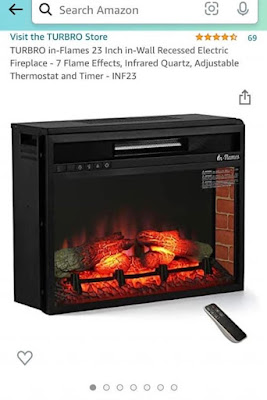 Next up .... a water powered macerator.  Here at my house it's a very long run to a septic cleanout lid.  I've actually only had to dump there twice in ten years, which requires at least three long lengths of sewer hose.  I'm wondering if this actually works.
It runs $76 from Amazon and one guy said he runs it downhill 200 feet to his septic tank.  At least he's going downhill ... I'm going straight across.  Anyone have any experience with this one? 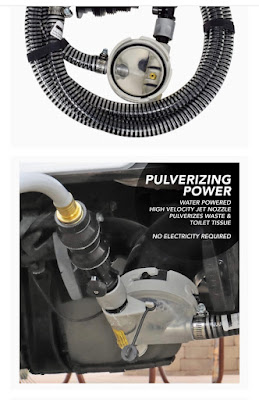 My project of the day was to put something in the bottom of my new toolbox to keep things from sliding back and forth.  I happened to have some old carpet which worked perfectly.  I was even so proud that I cut it the exact right size.
What I WASN'T excited about was when I lifted up that heavy generator to the tailgate and finally got it settled inside.  You cannot imagine my disappointment when the lid would not shut.  It's 1" too tall.  You could almost hear my consternation in Arizona.  RATS!!!!  All this work and expense for nothing.  I just figured the box was tall enough.
Another box is not an option because it has to be level with the side rails for the rig not to hit them.  My alternative is to chain it in the back where it has a good chance of getting stolen, or carry it in the front of the trailer, taking everything else out to minimize the weight.  I guess I'll just have to fill up the toolbox with whatever I can from the front of the trailer.  Sigh ............. 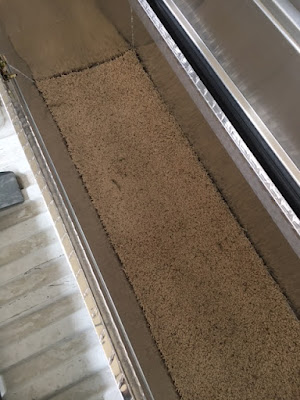 In the meantime, I have visitors in Vail Arizona.  Doug and Nick decided to camp out at my place for a couple of days, awaiting parts for his RV.  It's a win-win situation.  Although he's not using my electricity, which he is welcome to use for free, he is chasing the snakes away (just by being there) for my arrival later in the month.  Although there is plenty of room at the fairgrounds, free parking away from the maddening crowd is always preferable.  I'm so happy I could help them out. 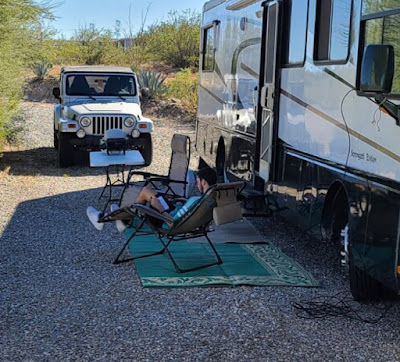 Big things happening here this morning, so I'm on the run early.  I'll post about that tomorrow!!  It's going to get crazy here for the next two weeks.
One last note ... check out the TV show called Great Escapes by Morgan Freeman.  It's fascinating!!