There are lots of poisonous things in the desert, but at least you can see them coming.  It's a different story in the jungle.  I kept wondering what people DO there.  There are no trails to wander, and if you do, they are full of things that can hurt you.  I have to say however, the REALLY good news is that we saw NO snakes!!

As I mentioned before, every group had their Guide.  We just followed along here and there with other groups of eight.  This very nice guy said he grew up here, working his way up through the ranks of biologist-type guides until he finally acquired THIS job.  He loved it and he got paid!! 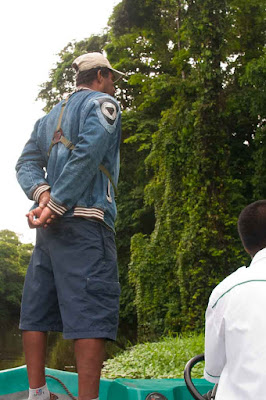 On this day we loaded into a boat and headed down the river, turning right and left and ending up in some very narrow channels.  The logging of teak wood trees was big back in the day, thus the leftover remnants of equipment we saw laying around everywhere.  Here the sign directs you to different canals owned by the lumber companies.  I can't imagine how they could possibly float those trees downriver. 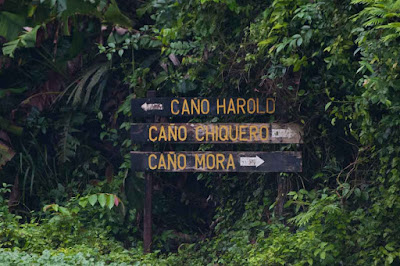 Along the way we spotted flocks of parrots and macaws flying overhead, but they were too high to get pictures.  The iguanas didn't have a problem posing for us though.  He is in his finest coloring, trying to attract a beautiful female.  These guys are everywhere!! 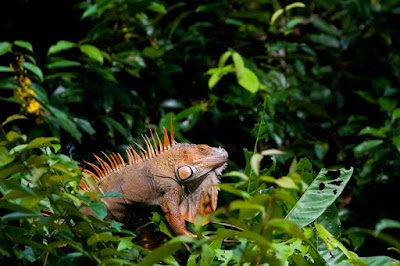 Yes, blurry picture.  It's hard to get pictures in a rocking boat when it's so dark underneath the canopy you can barely see.  I lightened this one considerably so the roots were visible.  Isn't this amazing?  They were all along this canal used to transport the trees they cut down.  The water was barely ten feet wide and very shallow. 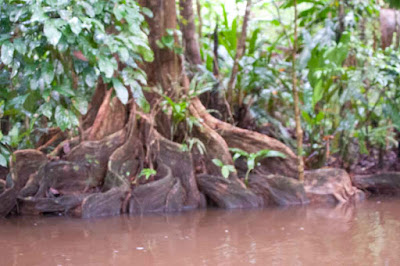 I asked the guide about the poisonous frogs ... probably not the best question.  The driver ran the boat against the side and the Guide jumped off.  Wait ... don't leave us!!!   In about two minutes, he came back with this in his hands.  DON'T TOUCH he said, as he kept rinsing his hands in the dirty canal water.  Finally he put it on a leaf for us to check out. 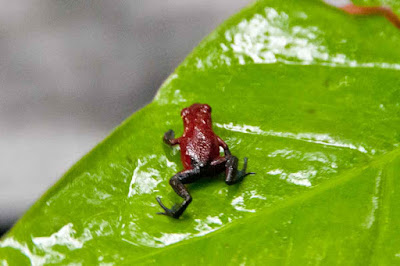 This is the frog the natives rub their arrowheads on, to use in hunting dinner.  Yes it will kill you.  Okay then, can you please put it back?  It was maybe 1-1/2 inches long.  Tiny little guys you would never see on the jungle floor where they live. 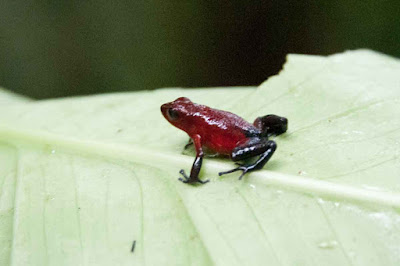 Not that I would ever go back ... well maybe ... but you can kayak this canal (if your kayak will fit on the boat used to get here) as it meanders around a big loop through the forest.  My advice is not to fall in the water. 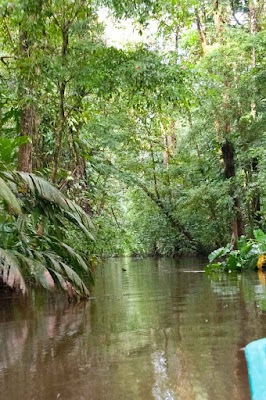 The boat trip finally ended back at our dock where we were treated to tea and crumpets.  Not really ... it was over 100 degrees with 100% humidity and we were served sweet cookie-like things and hot chocolate.  I don't much remember the cookies, but the hot chocolate was amazing.

It was so amazing that when I returned home, I got on the internet and ordered six huge bags.  I couldn't wait for it to arrive.  It took about three months.  I finally received a package that had been opened and closed a dozen times.

I never gave it a thought until I opened the package.  I had ordered 3 pounds of a white powdery substance from just south of Nicaragua.  I'm sure they thought it was drugs and so opened the package at every stop.  The cocoa was good, but I never did THAT again. 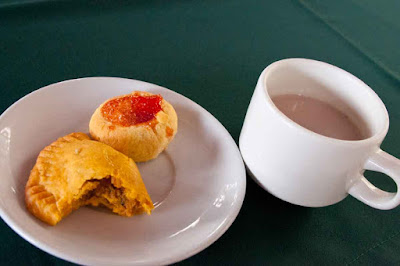 Now dripping wet from the heat, we went back to our room to find everyone else was in the swimming pool.  No one told us there was a pool, so we didn't bring a bathing suit.  By now the heat made me very cranky.  I wanted to be in that pool!!!

If we had brought any extra clothes at all, I would have gone in with shorts and a t-shirt.  In desperation, we put on our old wet, stinky, dirty clothes because the "wet" part made them cooler than dry clothes.  We reeked of ... well .... jungle!!  That's probably why we were left to our own devices when it came to dinner.  But that's another story.

Speaking of reeking, one of my local visitors stopped by the water station.  You can usually smell them before you see them.  There are lots of tiny babies running about, but none have come to my station.

The weather has cooled again.  They expect 50 degree days with 30 degree nights.  Woohoo ... I'm turning my heater up!!  It's almost time to turn over a new year.  I hope it's better than this last one, but I'm not holding my breath.

Posted by Nancy Kissack at 4:50 AM