How Did Santa Get THAT In His Sleigh?

With not much else to do, I finally drug out my camera and downloaded a couple of images of the Christmas Star.  I'm sure you've seen dozens of pictures like this ... hand held and blurry.  I would say not worth the paper it's printed on, but thankfully we now have cheap digital!!  This is a throwaway! 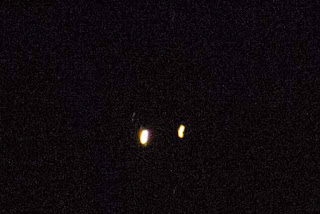 It's CHRISTMAS!!   Santa woke me up very early with all that tromping on the roof.  I opted for the perfect wake-me-up breakfast ... PIZZA!! 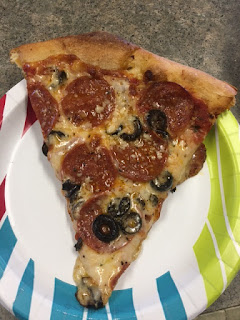 That was followed up by two cinnamon rolls, the sweetest I've ever eaten, meaning I put in way too much brown sugar.  You know where this is heading!  Stomach ache city! 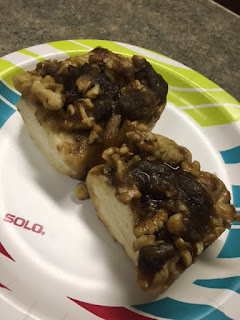 Outside it was cold windy and raining, but I braved the elements to retrieve the game camera. 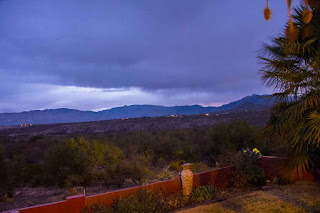 I was very surprised to see a couple of coyotes having a drink and two rabbits frolicking in the bushes.  Then I clicked on THIS!!  I don't know how Santa got him into his sleigh to deliver to me Christmas morning, but this was the perfect Christmas present.

There are six magnificent videos, but I'm only showing you two.  I don't have enough gigs on my plan to include all of them.  I don't know if this is a male or female, but you will see a little territory marking at the end.  That means I should see him again!!!

I watched them over and over as I prepared the huge ham for the oven.  I picked the smallest one I could find and it was still a monster.  I did have a little trouble finding a pan to cook it in since nothing was big enough.  That's red eye gravy in the back, a rarity since we only had beef on the ranch. 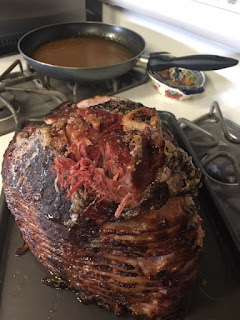 I really didn't think there was all that much food on my plate until I was done.  I should have seen it coming.  Complaints came right and left ending with tums for dessert.  I was miserable for the rest of the day and passed on dinner completely.  Truthfully, all I could think about was ham and scalloped potatoes, or macaroni and cheese with ham. 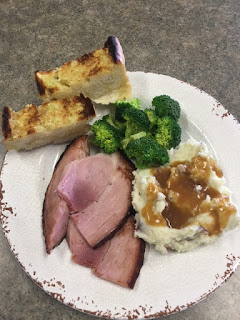 Cooper and Jessie got their new toys, meaning I had to play on the floor with Cooper for about four hours last night.  He certainly did love the fish Santa brought for him.  Miss Jessie ... like any kid ... played for ten minutes and was done. 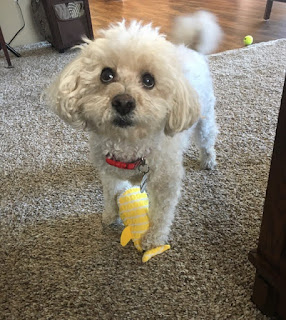 By the way, you were right.  The new computer is now asking for an update.  I'm not sure how this is going to be accomplished.  It requires 12 gigs of download.  I am only allowed 10 on my internet package.  So here I am, back looking for an internet connection to complete the SEVEN HOUR download.

One last request ... with all the wind and the dry desert, I'm getting shocked every time I even get close to an electrical outlet or anything metal.  Anyone have any remedies to lessen the pain?  I mean really, you can see the fire flash between my finger and the outlet when I'm six inches away!!

In the old days they had a carpet spray that worked wonders ... today it's not to be found.  I'm pretty sure I could pop that moose crunch popcorn just by pointing my finger.

Merry Christmas ... I hope your day was a happy one!!