Yes my friends, the day has finally arrived.  Opening Day of baseball was a hit, especially since I get to watch all the games.  I know, that's weird for a girl, but you've never had so much fun as being at a baseball game ... live and in person.  I was hooked from the start.  It's also more fun if you've been up close and personal with many of the players.

Unfortunately, none of my favored teams won.  No problem ... there are lots of games to come. 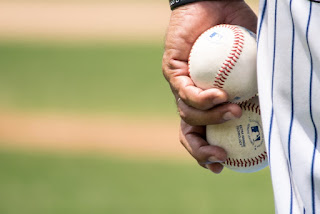 In other exciting news, I HAVE A NEW WINDSHIELD!!  Wasn't I pleasantly surprised when he called at 12:45 to say he would be here in two hours.  Progressive should take a lesson from these Mobile RV Repair guys.

Talk about professional ... from the time they arrived to when the windshield was out, amounted to 30 minutes.  Can you believe it?  He said he's been doing this for 25 years. 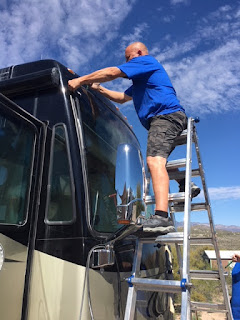 I had no idea how this was going to work.  It was interesting to watch him pull the seal away, whereupon the glass just lifted right out.  I was surprised to find it was made up of two very thin pieces stuck together.  No wonder they break so easily. 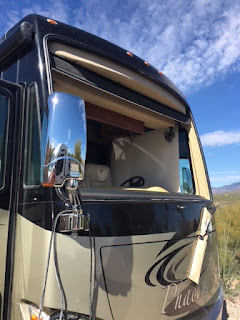 In no time at all, the new glass was in as he ran a bead of black caulking around the edge while maneuvering the glass under the seal.  Once that was done, it was just a matter of putting the beading back.  That probably took longer than anything. 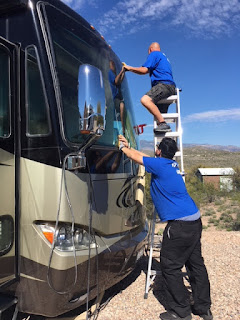 Here she is with brand new glasses I can see out of.  The entire process took about 75 minutes.  Before leaving, they used a glass cutter to split the old piece in two so I could see how it's made.  I tried to snatch that really nice super sturdy ladder, but I got caught in the process. 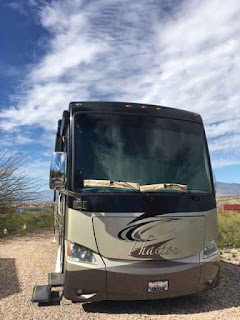 To celebrate, I picked up a pizza at Arizona Pizza Company.  If you "like" them on Facebook, you will get the Thursday night secret word.  In this case BASEBALL in order to cash in on a pretty big discount.  This large came to $17.  Why buy a large?  Because it's going to be my breakfast, lunch and dinner for the entire trip home!!! 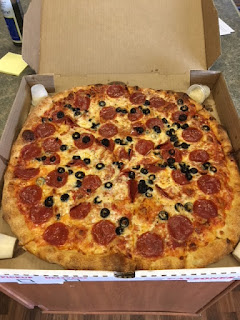 Sadly, time flies when you're having fun, and I'm packing up to head North.  Jonathan and the kids voted to stay, but it's again time for that nasty word TAXES.  It's time to head 'em up and move 'em out!!