In 1874, gold was discovered on the East side of the Santa Rita mountains.  The area became known as the Greaterville Mining District.  Nowadays there's not much left of Greaterville, but Kentucky Camp survives in the National Forest.  That was my destination on this day.  At least I'm not hiking. 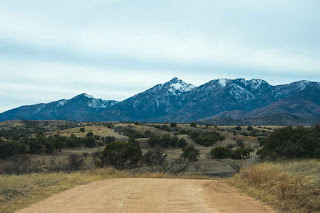 Traffic was pretty light on the 9 miles of dirt road I had to navigate.   Rarely wider than one vehicle, this was the only traffic I encountered.  The further I got, the better the road was since no one apparently goes this direction. 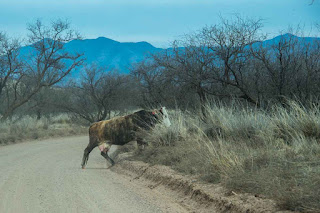 At 15 mph, it took me awhile to locate the gate.  At the top of the ridge were four tents and six people huddled around a fire.  People camping ... they have to be nice, right?  They said the gate was locked up tight and I would have to leave my car there and walk.  Hmmmm leave my car, okay.  I threw absolutely everything in my backpack and headed off down the hill.  In my cowboy boots.

I was not prepared for walking, not that boots are bad because mine are pretty comfortable.  It was the slippery gravel going down that very steep hill.  All I could think of was I had to hike back UP.

Believe it or not, water is rather hard to find in this area.  Duhhhhh, it's the desert.  So miners had to load all their paydirt into bags and carry them down to streams for processing.  In 1886, most of them gave up.  That was way too much work. 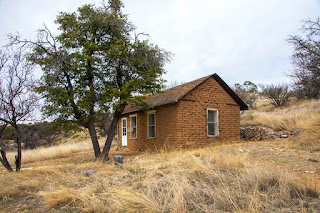 In 1902, California mining Engineer James Stetson had the brilliant idea to create a dam and catch runoff from the mountains to be used in hydraulic mining.  It would have worked perfectly today, as it's raining again here in Tucson.

After convincing a wealthy Californian to invest in his plan, the Santa Rita Water and Mining Company was created with it's headquarters here at Kentucky Camp. 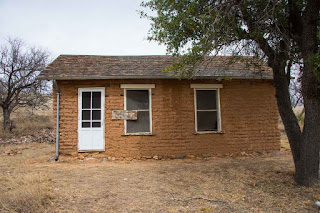 These buildings were the offices and residences of the mining employees.  This was probably the bosses quarters.  Believe it or not, it's now a Bed and Breakfast that you can rent for $75 a night.  Bring your own food, blankets and silverware.  There is a microwave for your cooking pleasure. 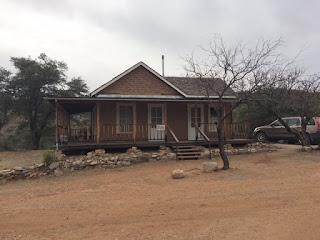 By 1904 the dam and water system were in place, with hydraulic mining in operation here at Kentucky Camp.  This is the remnants of the barn used to store equipment. 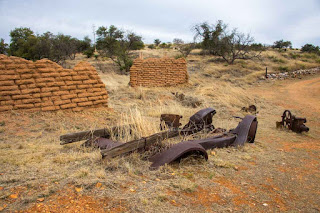 This 10 room building ... it's HUGE inside ... became the headquarters until one fateful day in 1905.  The day before the big stockholder meeting in Tucson, Mr. Stetson fell from the window of the Santa Rita Hotel in Tucson, landing on the concrete below.  Did he lean out too far?  Did he have a stroke? Was he murdered?  No one knows for sure, but his death at age 37 was the death knell for Kentucky Camp. 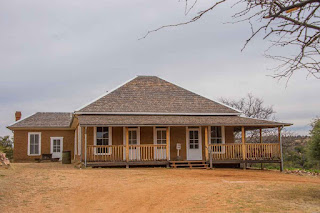 The rich investor McAneny from California was in bad health, and in spite of pouring lots of money into the place, mining came to an end and it was abandoned. 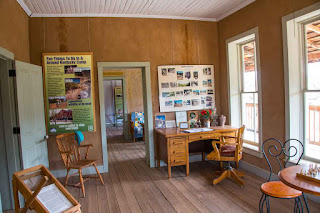 This house is gigantic, with over ten rooms.  The hallways are wide and long, with the original flooring present in almost every room.  You can rent this one too for your family reunion or birthday party .... only $200 a day.  The cool part is you also get the B&B for the night before and after.  There are beds here, but they don't look too comfortable.  Still ..... you can sleep with the ghosts of miners.  Maybe even Mr. Stetson will pay you a visit. 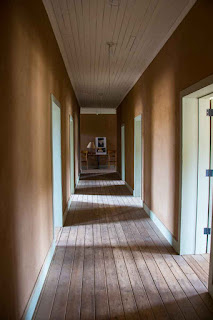 With no wallpaper available, they painted the walls in this room to provide a little decoration.  For the next 50 years it was headquarters for a cattle ranch, owned by an attorney of the rich California investor McAneny.  Sold to Anamax Mining Corporation in the 1960's, it was finally purchased in 1989 by the Coronado National Forest Service.

The first order of business was to reroof the buildings in order to keep rain off the adobe.  That was accomplished with a $10,000 donation from the movie company of The Young Riders who happened to be filming in the area.  Further restoration is being done by the Forest Service and the Friends of Kentucky Camp. 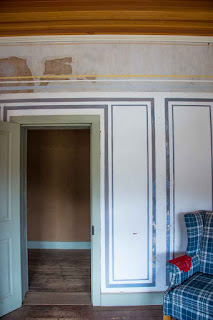 This is the back side of the headquarters.   I'm not kidding, this place is WAY cool.  I'd rent it in a flash. 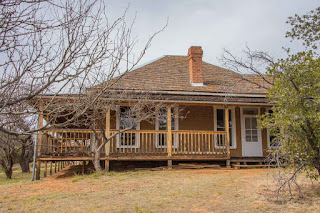 This amazing porch wraps around three sides of the building, with adirondack chairs for your sitting pleasure.  It's so quiet here you can hear a pin drop. 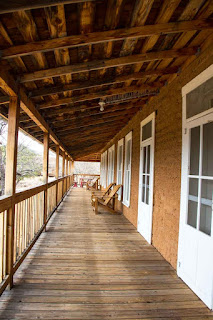 Out back is the last vestige of gold mining equipment, one of the hydraulic hoses used to destroy the mountainside.  All this time I'm thinking about my car, but it's so nice here, I could stay for hours. 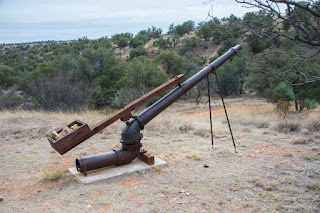 To the downhill side is another building which was the Assayers Office.  Here they processed gold samples to determine it's value. 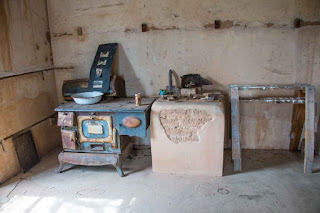 Sadly, Kentucky Camp was completely cleaned out before being abandoned.  Thankfully the Forest Service picked it up and is restoring it as an example of the mining efforts in the Santa Rita mountains.

Time to head back UP that big hill with my 25 pound backpack.  It was a very long hike in my cowboy boots.  Yes I would have worn tennis shoes, but the website said it was open, meaning there should NOT have been a 400 yard hike down a steep hill. 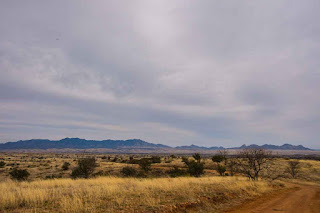 I made it back to my car, letting the campers know they were in the wrong spot.  There was a nice bed and breakfast just down the hill.  It happens that this is the intersection of the Arizona Trail and this group was heading North.

Thankfully my car was just fine, as were my feet once I got my boots off.  The drive back OUT the 9 mile dirt road was a faster 20 mph.  Since then I've found the location of the town of Greaterville itself.  I may just have to make a return trip ..... with my tennis shoes. 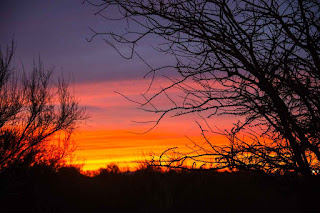 There was a beautiful sunset to end the day as I spent an hour looking up more ghost towns.  I suppose it's a good thing, but they are all on very long dirt roads.