I Didn't Think It Was Possible ...

But my computer is sick again!!  Like longtime RV'er, writer, kite-flyer, publisher Nick Russell said, there's some guy that's actually paid millions to write these error messages that have us screaming in rage and pulling our hair out!!!

It only connects to the internet when it feels like it, which isn't very often.  Although it tells me it's searching, the allusive servers out in Never Never Land, never seem to answer the phone.  Unlike Nick, I don't have a "Gregg" on my call list, so I'm off to the Apple Doctor later today to see if the problem can be diagnosed, and hopefully repaired with minor surgery!!

Wednesday I made the trip to one of my favorite Cowboy Towns ... Clovis California.  Their big rodeo is this weekend, and being Cowboy Central, I figured I would see lots of guys in ten gallon hats.  I didn't think it was possible, but I did not spy a single one.  Oh wait ... there were the guys with all the lawnmower equipment parked at the gas pumps with their lunch spread out on the tailgate, not letting anyone else fill up.  One of them had a cowboy hat and a beautiful red bandana hanging from his hip pocket while he leisurely sipped his coke!!

Further down the street, traffic came to a complete halt at a green light.  Hey folks, green means go!!  As I inched forward, I found a rather strange looking man doing push-ups in the middle of the street.  Yessiree .... Clovis has changed over the years.  At the insistent honking coming from behind, he finally jumped up, grabbed his homeless cart and pushed off down the middle lane.

I spent some time in the quilt shop gathering different pieces to complete three more ... always, and I mean ALWAYS buy everything you need to finish your project at ONE store.  Six months later, all that fabric has been discontinued and you will never find a suitable replacement!!!  Kind of like my computer trying to find the internet!!

It's lunch time ... and I'm usually not this impulsive ... really ....... no REALLY!!!  When I heard the advertisement for Todd's BBQ on the radio, which just happened to be located down the street, my truck just drove there on it's own.  I ordered a pulled pork plate for $12.95, a little high for me, since I'm in to Lean Cuisine at $2.00 each!!  This sandwich was HUGE ... HUGE with a capital H!!  Five inches across and three inches high, I couldn't even get my mouth around it!!  Having been on this stupid diet, I was in seventh heaven!!!  No way could I eat all of it ... but I was a little piggy who gave it a good shot!!   I also got a pound of brisket to go!  Had I known they had bread pudding, I would have gotten a pound of that also!!! 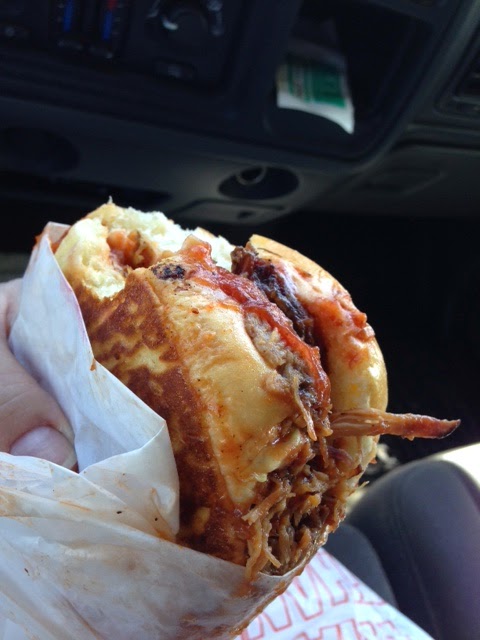 Not only was it a huge sandwich, but it came with a huge amount of cole slaw (or whatever side you choose).  This isn't one of those small cups ... this is almost a pint!!!  I have to say it had a little too much horseradish for my taste, but if that's your thing, you're going to LOVE this!! 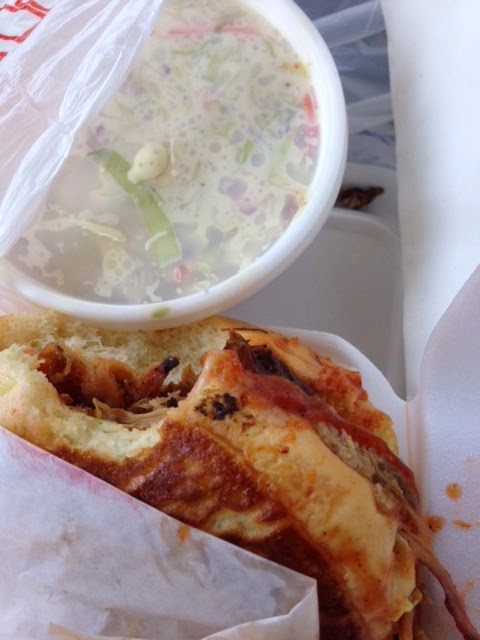 I really didn't think it was possible for me to lose any weight, even though I stayed on the diet very strictly for the first month and a half ... as soon as I ate that sandwich, every pound came back!!  I've been doling out the brisket to myself in small pieces, so as not to go completely berserk!!  I guess I just love food too much!!!

Well I didn't think it was possible that I would get this blog posted today, but (keep your fingers crossed) it's looking good at this point.  I'm praying that bodes well for my Apple Doctor trip!!  There's more news, but I don't want to push my luck with the internet ...
Posted by Nancy Kissack at 7:14 AM