Look out below ... I'm cooking again!!!  Sometimes you just have to get your "volunteer" on and our Bingo group is VERY good at it!!  If there's any non-profit organization needing food, this group provides it, as it did this last weekend at the Relay For Life fundraiser in Merced.  Now this is a BIG pot of pasta!!! 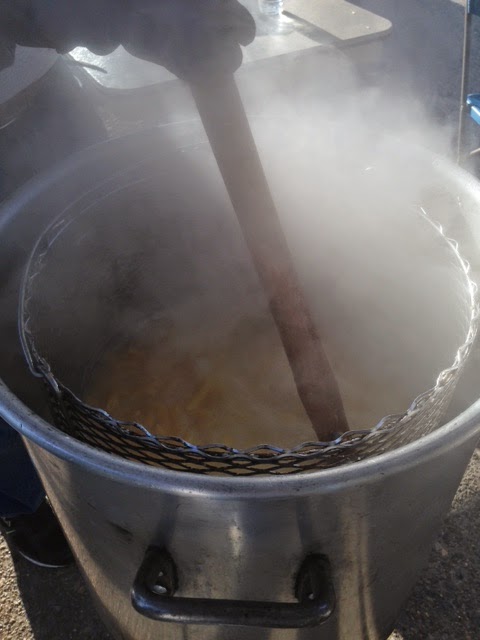 I spent the better part of Saturday afternoon cooking rigatoni.  These aren't a bunch of techno computer guys who read my blog, so my disastrous cooking experiences were a secret .... until that ONE moment!!!  With huge pots two feet across and over two feet tall sitting atop screaming propane burners, SOMETHING was bound to happen, with my record of cooking disasters. 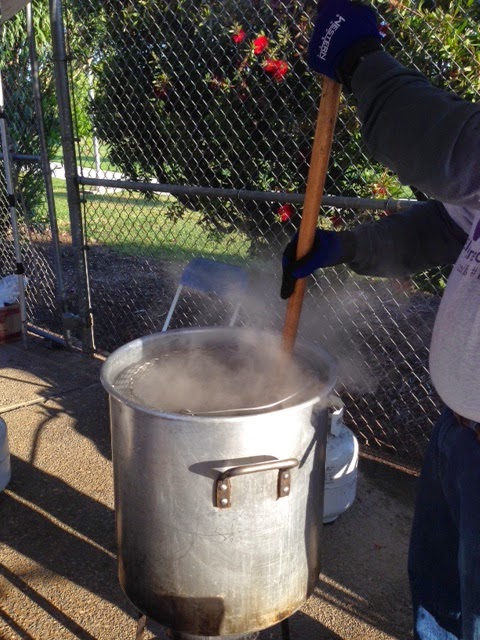 These pots hold baskets so the crab, shrimp or noodles can be removed to serving pans and the water used for the next batch.  While the water was boiling (I got them to use an RV water filter when filling the pot), I kept trying to put the baskets in, but the men knew better, and told me to wait.  That was their SECOND mistake, their FIRST being that they asked me to help.

The next thing I heard was "We're late .. get the pasta in the water"!!!  And so I did what I was told ... I dumped an entire ten pound bag of rigatoni in the boiling water .... without the basket!!!  I tried to run away, but they caught me, dragging me back to help think up a way to get all that pasta OUT of the pot and leave the water.  There's no time to boil another pot full and no extra pots.  Danger ... danger ... heavy pots of boiling hot water!!!!   With lots of ingenuity and pasta water everywhere, we were finally able to make a couple of transfers, getting the pasta into the basket, then back into the pot without scalding anyone.  WHAT A MESS!!  My secret's out .... RATS!!!!

The cooked pasta was then mixed with the pre-made meat sauce, before being served to 300 people.  I also insisted on meat in the sauce this year.  There's nothing worse than pasta with plain sauce!!   Here's a neat trick ... to keep the salad from getting mushy, they placed each serving in a cheapo plastic bag and added a packet of dressing.  There was no soggy salad at OUR dinner!! 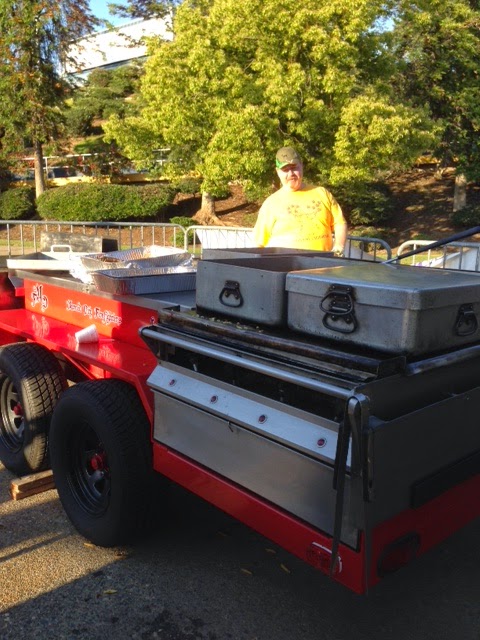 Amazingly ... or maybe just because they were in dire need of help, they asked me to come back at 6:00 Sunday morning and cook pancakes.  You've got to be kidding ... after THIS fiasco???

At 4:30 am both of my alarms went off, as I drug myself out of bed.  In order to clear my name, I gathered everything for morning Bloody Mary's and headed back to the College track bleary eyed.
The first order of business was to mix up a 25 pound bag of pancake mix.  For that, you need a BIG whisk.  Instead, they used a drill with paddles, which worked pretty good once the first burst of flour hit everyone in the face! 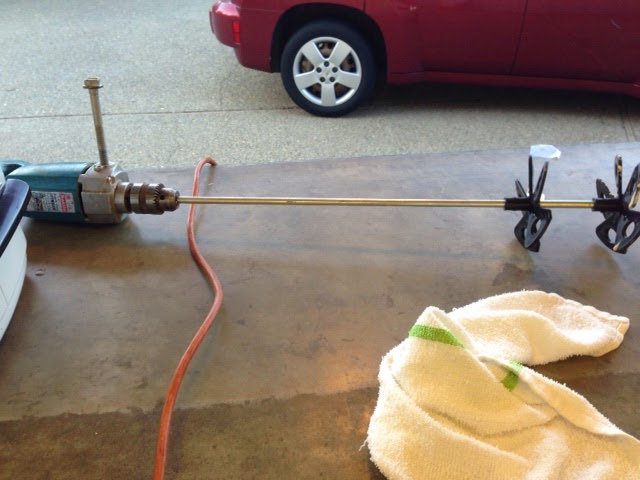 With this many cooks in the kitchen, all fighting over who was the top dog and how to cook the sausage, I kept my distance.  The truth is, I didn't want to get anywhere near a propane flame or uncooked food.  My motto is let the guys do their guy thing!!! 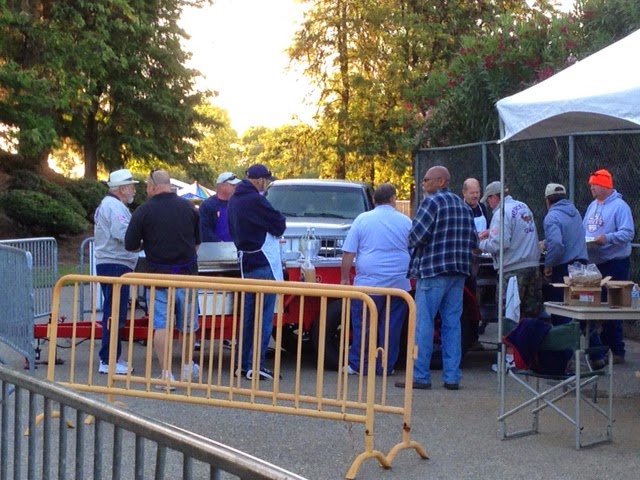 The first few came out a little overdone, about six inches across and one inch thick.  Uh guys .... maybe you should thin that batter just a smidgen!!  Pretty soon we were serving up breakfast for 250 people.   My job was to place syrup and two pancakes on each plate.   After everyone was served, I picked up the burned ones I tossed over my shoulder on the floor. 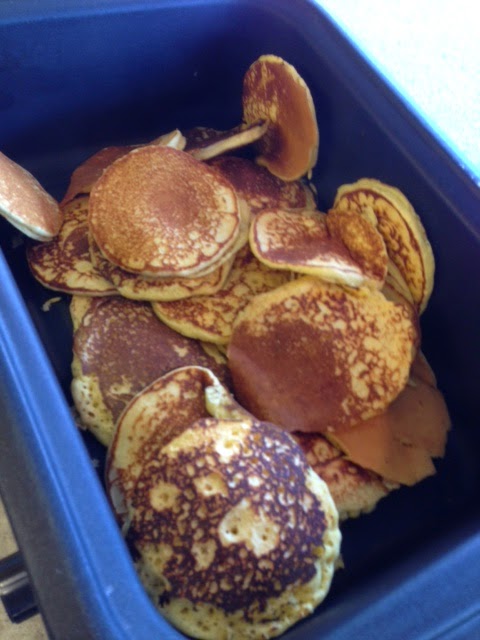 Once done, the guys came through the line and we played frisbee with the remaining discs.  Unfortunately for me, I tried one pancake with what they called syrup, and believe me, it tasted worse than anything I EVER cooked.  Totally tasteless ... horrible, to put it mildly!!!  I complained to deaf ears, but believe me, next year you will see Mrs. Butterworth sitting on the counter.  I suppose people won't complain, since lunch, dinner and breakfast were free to anyone who walked up to the counter, but really, there's room for improvement!!

There was a little overkill on the sausage, cooking six huge bags, but it was the tastiest part of the party!!  We all got to take home twenty or more links!!  I passed on the leftover pancakes.

Posted by Nancy Kissack at 6:46 AM