If you didn't watch Game 7 of the World Series, you missed the biggest and best game ever played in baseball!!  The old saying, "when you gotta good horse, ride em" couldn't be more true.

Twenty five year old Madison Bumgarner recently signed with the Giants for another 7 years at a measly $35 million.  That's cheap in baseball language!!  He's been a good pitcher ... but the games he pitched in this World Series were the best in baseball ... EVER!!!  He's a tall lanky kid that just couldn't miss.  He kept striking out the Royals players one after another.  Most pitchers pitch one game in five.  He pitched a full basically-no-hitter game three days before.  Last night he came out and threw another FIVE full innings to win the World Series.  Most great pitcher's earned run averages are in the 1.XX range.  Madison's World Series ERA was .25 ... the lowest in the world.  He's a legend in baseball!!  That's never happened before and probably won't ever happen again!!

Kudos to Manager Bruce Bochi for keeping him in and riding that horse to the winners circle!!  Bochi did say that he tried to stay away from Madison because he was afraid the pitcher would say he was getting tired.  But Madison had no intention of letting his team down.  At 6'5" and 235 pounds, he had what it takes to become a LEGEND in San Francisco AND Baseball history!!! 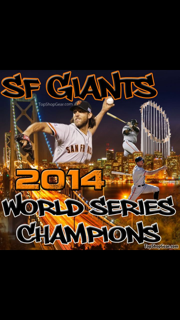