Do You Want To Hear Some Football???

I pulled out of Williams yesterday morning under cold 48 degree cloudy skies.  I double checked the weather report, and even though there were some rain patterns on radar, the predictions said NO!!  Hahaha  Never listen to the weatherman!!

When I got just out of town, I began to smell something like propane.  Very STRONG propane.  I even saw a couple of rigs on the side of the road, checking their gas.  Once I opened the driver's window, I discovered it was coming from outside.  It was so strong I started to get queasy!!  I don't know what the problem was, but pretty soon it disappeared, so I kept going, pretty sure that it wasn't from my rig.  Maybe that's the weird haze in this picture! 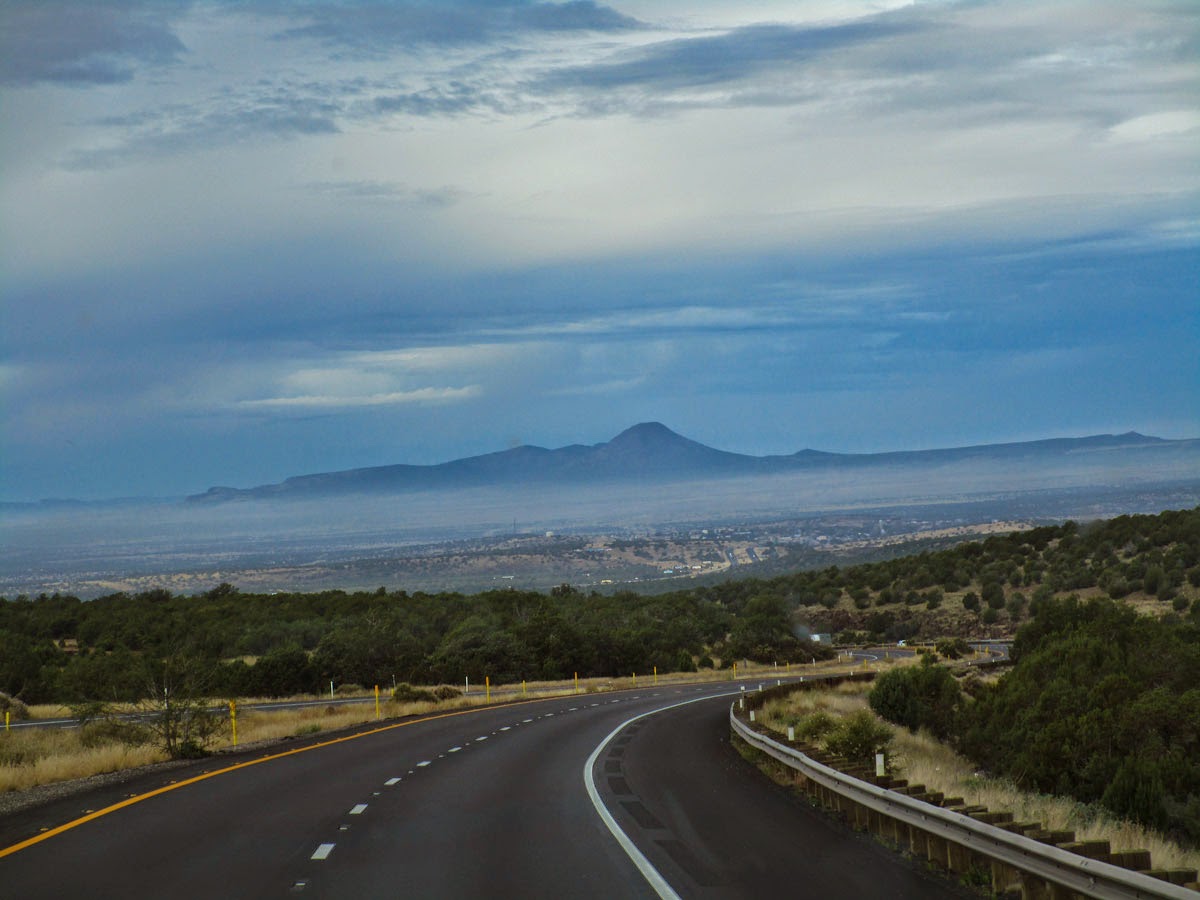 I had nice clean air for awhile, but once again heading down into this valley, the smell returned, stronger than ever!!  Again I opened the window, and it was enough to knock me on the floor.  Whatever it was, was VERY strong ... maybe the cloud cover was keeping "it" close to the ground.  I was trying to enjoy the scenery, but the smell had me more than a little distracted!! 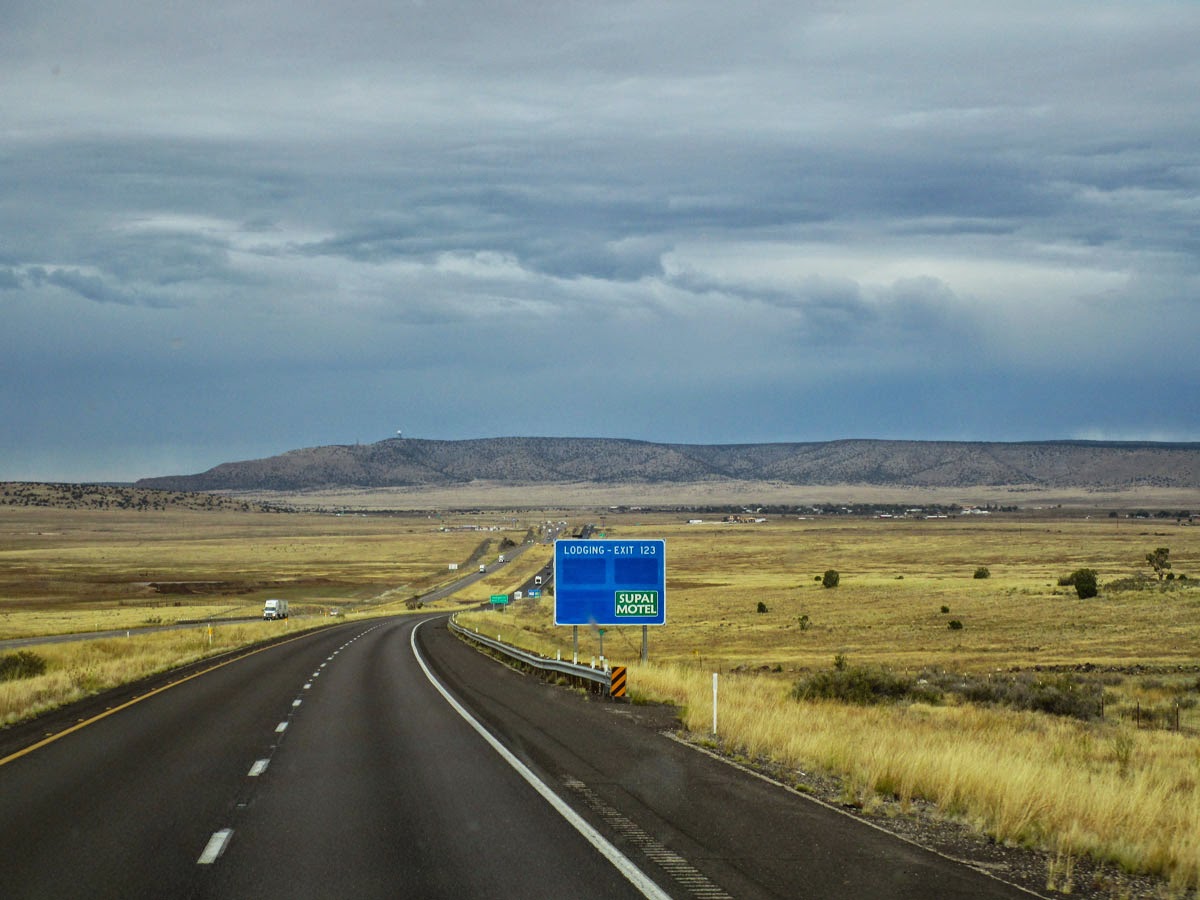 Finally it cleared up, as did my nose, and didn't return.  The landscape changed colors from blue to gold and back to shades of blue and purple.  I love it when the mountains look like paper cutouts.  I wish there had been a rest area so I could capture it with my other camera.  Instead, I kept driving and driving and .... 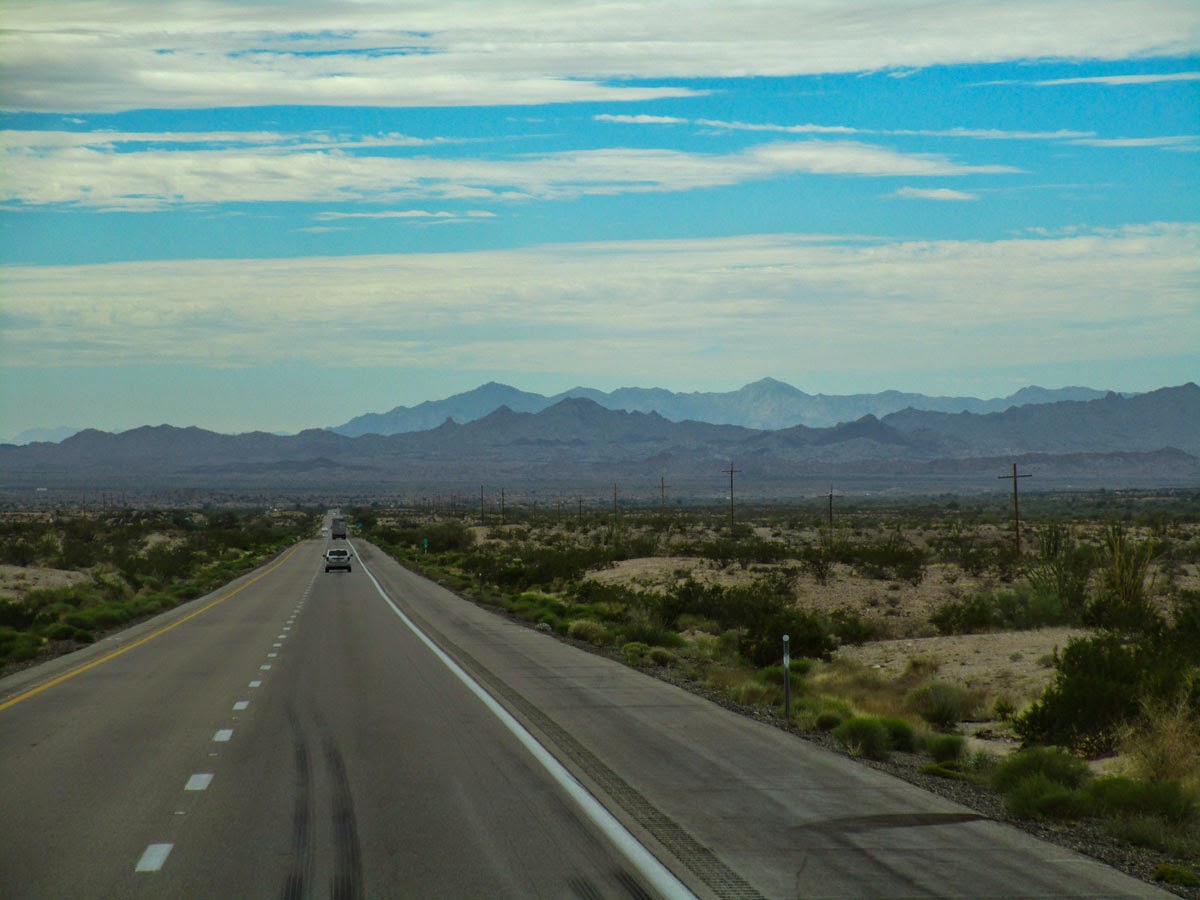 Although I had planned on a stop in Needles, a quick drive-by of the park changed my mind.  Maybe I'm just a little TOO safety conscious.  It had great ratings on RV Park Reviews, but every rig there was over 20 years old, most listing to starboard, not to mention it being 5 miles outside of town.  I kept driving ... and driving!!    That part between Kingman Arizona and Boron California is L O N G with nothing much to look at.  I guess when I'm going the other direction, I'm more excited, so don't notice it so much.  Here's my landmark for Lake Havasu City .... I know I'm close (or past it in this case) when I see these weird structures.  No idea what they are. 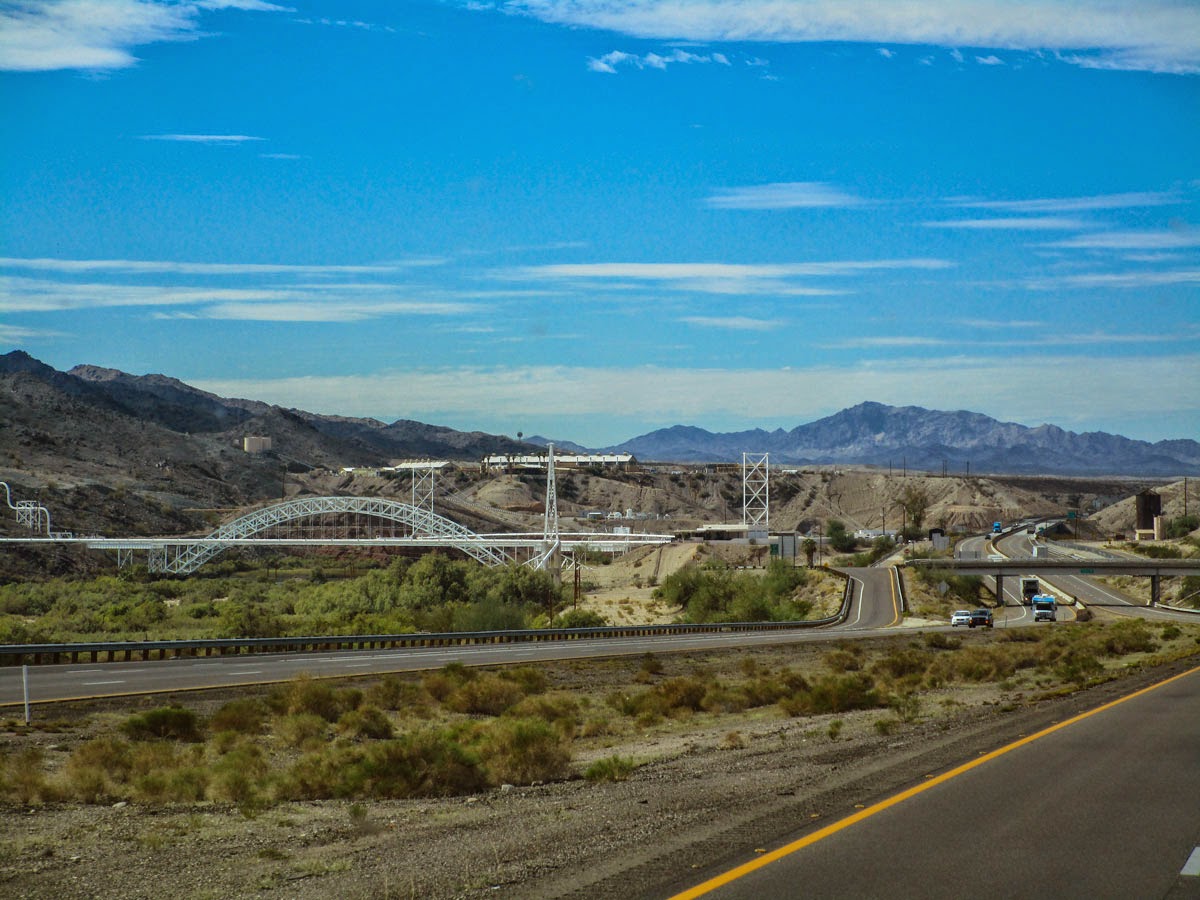 Then the Colorado River ... I imagine it's pretty, but I've never stopped.  I just kept driving!! 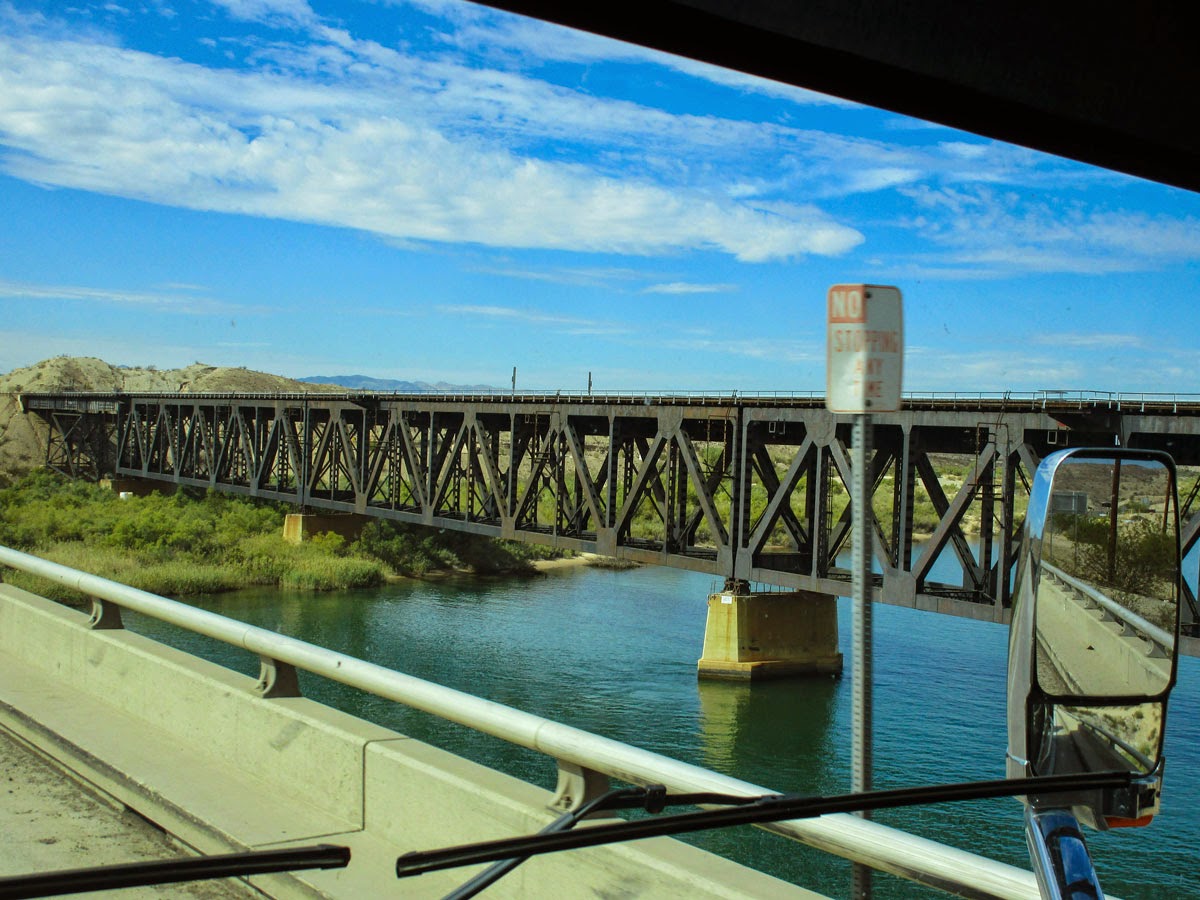 After almost seven hours, I was getting pretty tired, and was happy to see these little mountains around Barstow where I wanted to stop for fuel.  Unfortunately, my usual station here is Flying J, you know, the one with the crappy bio-diesel??  I'm sorry, but it stinks.  Regular diesel I can deal with, but this stuff assaults your nose!!  It was only $3.88 a gallon (I expected $4), but it kills my fuel mileage by more than 2 miles per gallon.  I'm cutting up my Pilot-Flying J card and getting Loves!!  Honestly I'd rather be sure my engine runs good and won't be damaged by using biodiesel, since no one can tell me whether it will hurt my specific engine or not!!  I'm sure the prices will creep back up to regular diesel in no time!! 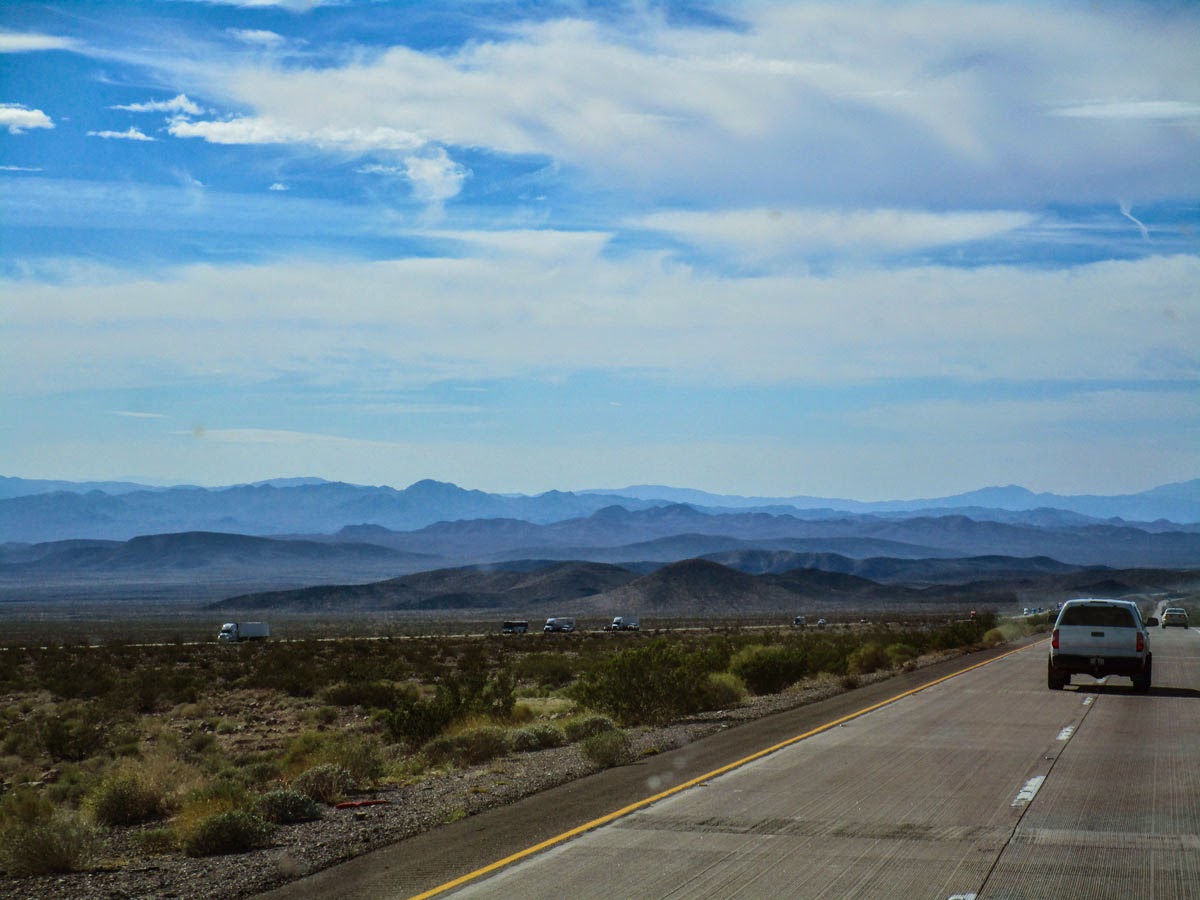 I pulled in to the Arabian RV Park in Boron, and didn't even complain when he gave me a site with two big trees at odd angles that I had to maneuver through.  Too bad about those broken patio tiles!!  My rear slide is about one inch from one tree and the electrical connection is literally on the ground ... but it's okay, I'm tired.  By 8:00 I couldn't keep my eyes open, so I turned off the TV.  It was then I heard the LOUDSPEAKER from the school football game next door.  It was so LOUD I thought the guy was in the rig next door.  I even went outside to check, but it was just the reverberation from the close buildings.  They sure had it turned up LOUD ... as they read off every business that donated and called out the game ... not once stopping for a breath!!  I don't know who won because I finally went to bed with a pillow over my head to muffle the noise.

I'm pretty drug out this morning, as those who have driven long hours know, but it's only a 5 hour drive to home, where I will work my fingers to the bone unloading and cleaning the rig, cleaning my house of 6 months dust, then washing 6 months of dirt and crud off the rig and jeep.  Hmmm maybe I should just KEEP GOING AND DON'T STOP!!!  Like the guy on the loudspeaker said many times last night!!