Last night some of the pilots were invited to the Boomer Happy Hour to discuss what being a crew member involves.  This is David Lopushinsky, pilot of the balloon Wicked. 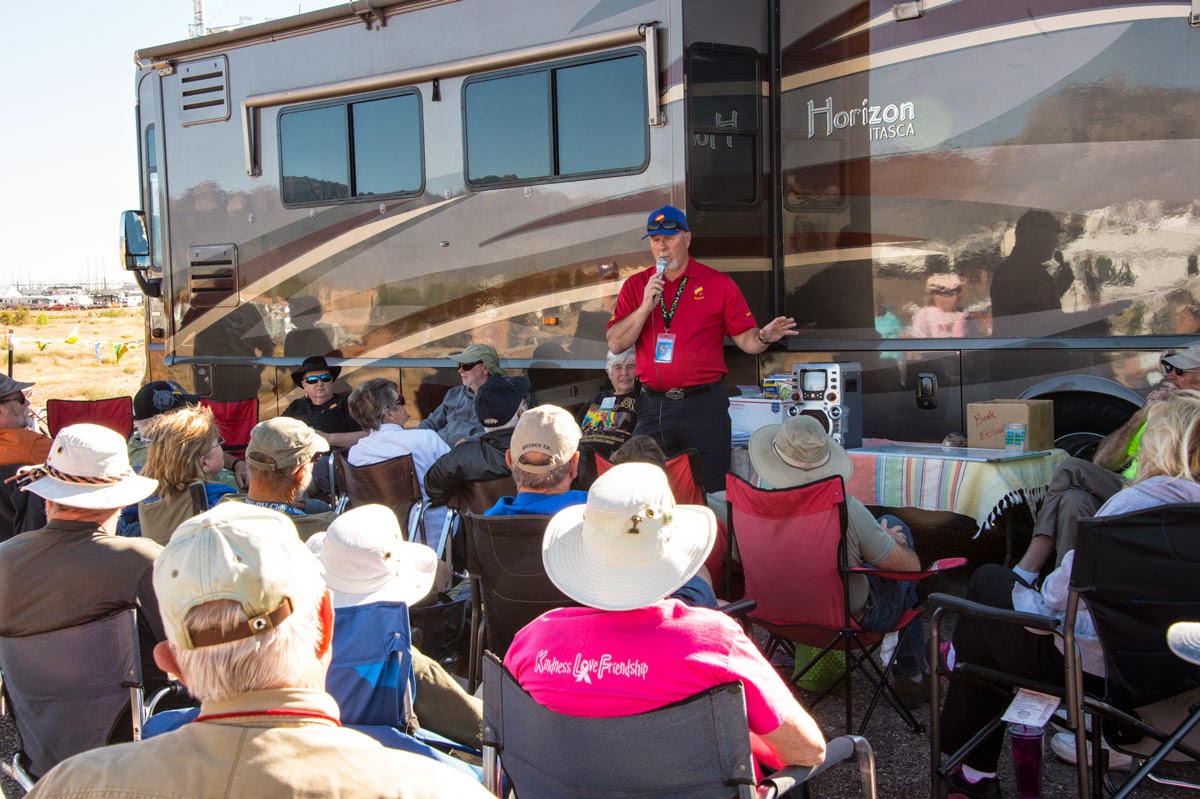 This is Mike Liberti, pilot of the Morning Star, who has two sons, Chris and Daniel, both of whom fly their own balloons.  Once the talks were over, all 65 of us went to the Hong Kong Buffet for dinner.

This morning, we met the entire Liberti family with all three balloons in a parking lot at 6:30 am to discuss launch and landing sites.   The wind is all important, so after much discussion, it was decided to head to an IHOP Restaurant West of our rigs. Chris' balloon Foreplay, was the first to unload and get set up.  There were probably 35 Boomers looking to help, so we split up into groups to get all three balloons in the air. 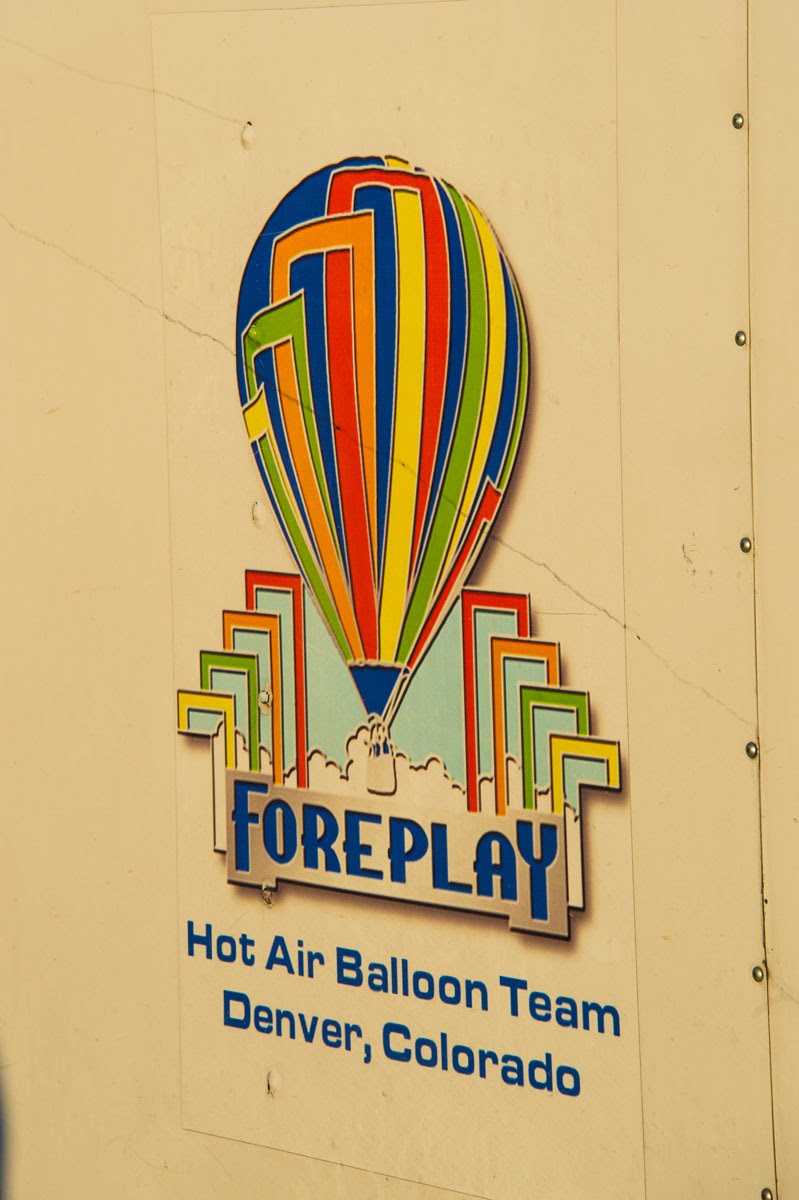 The first to exit the trailer is the tarp the envelope (balloon) is laid out on.  The next to come out was the basket, situated on a dolly for easier transport.  Finally the envelope is spread out on the tarp. 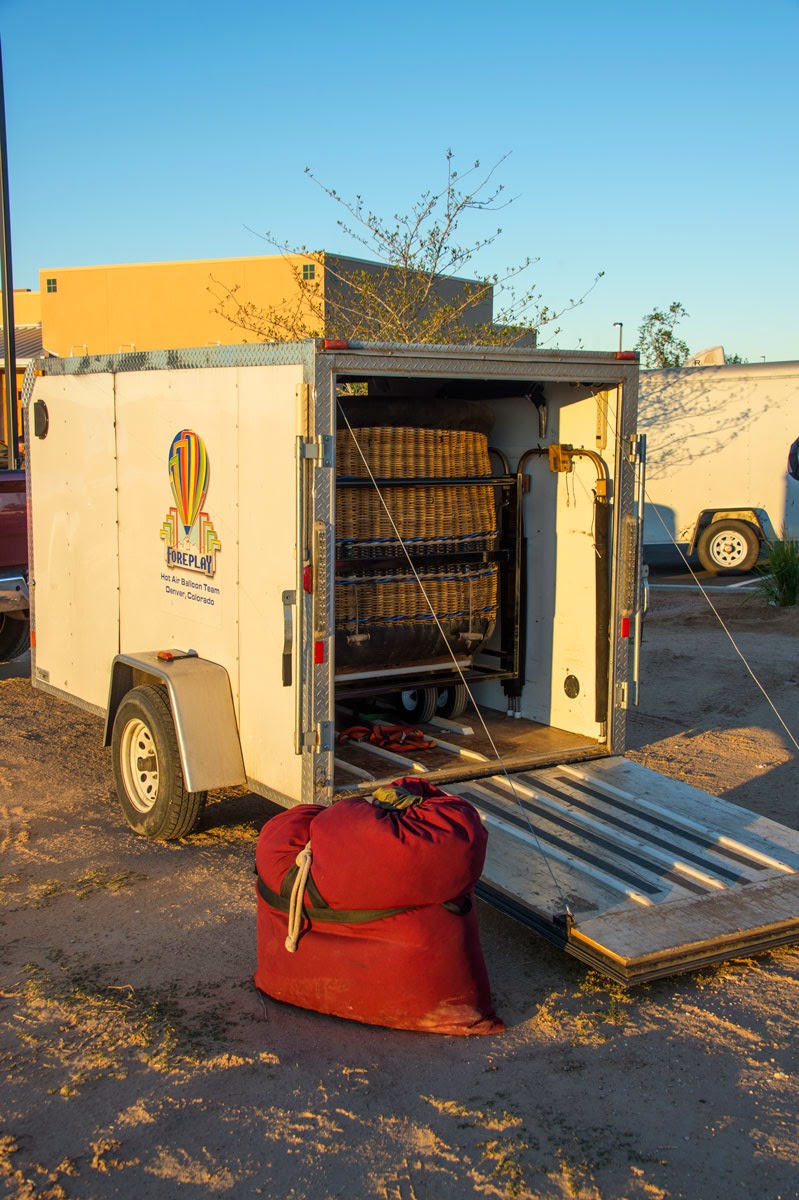 After receiving the "crew instructions", the basket was moved to the edge of the tarp.  This is Mike Liberti (who I stayed with at first), directing the guys where to place it. 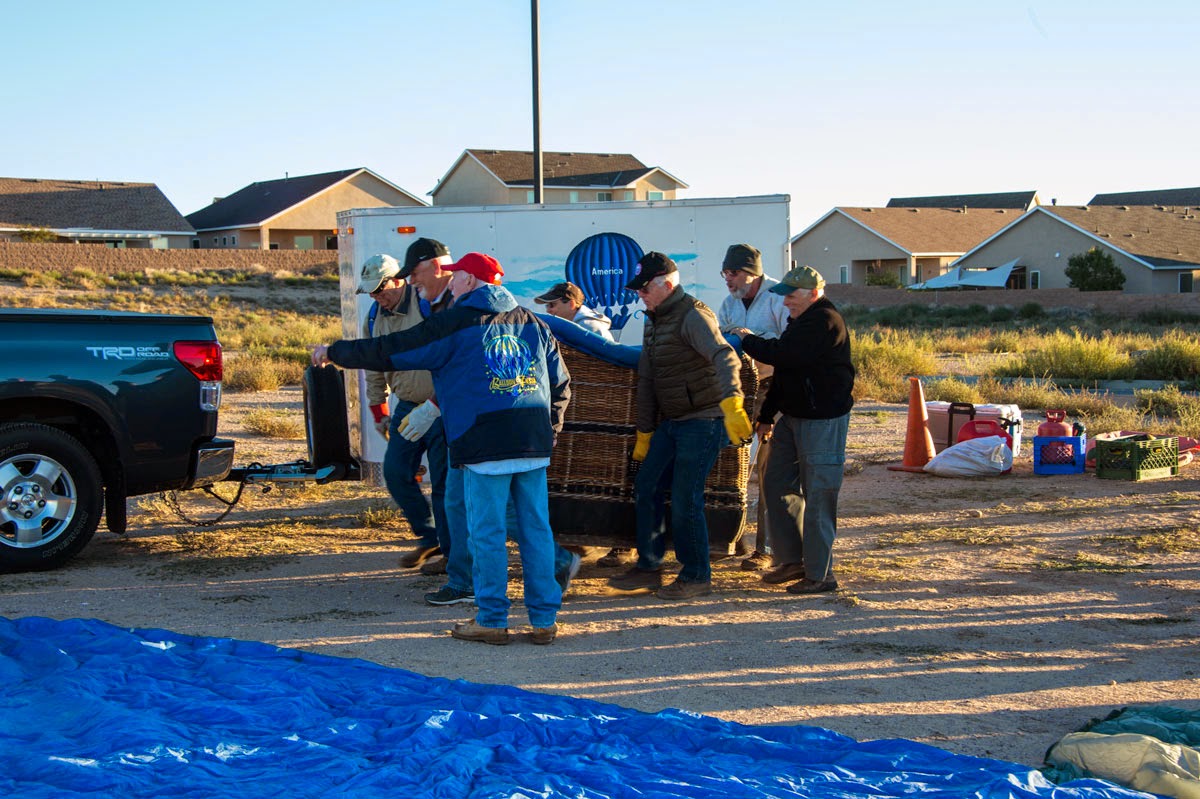 One set down, it is "laid" down on it's side to attach the burners and connect the propane lines.  Then it is stood upright to test the burners. 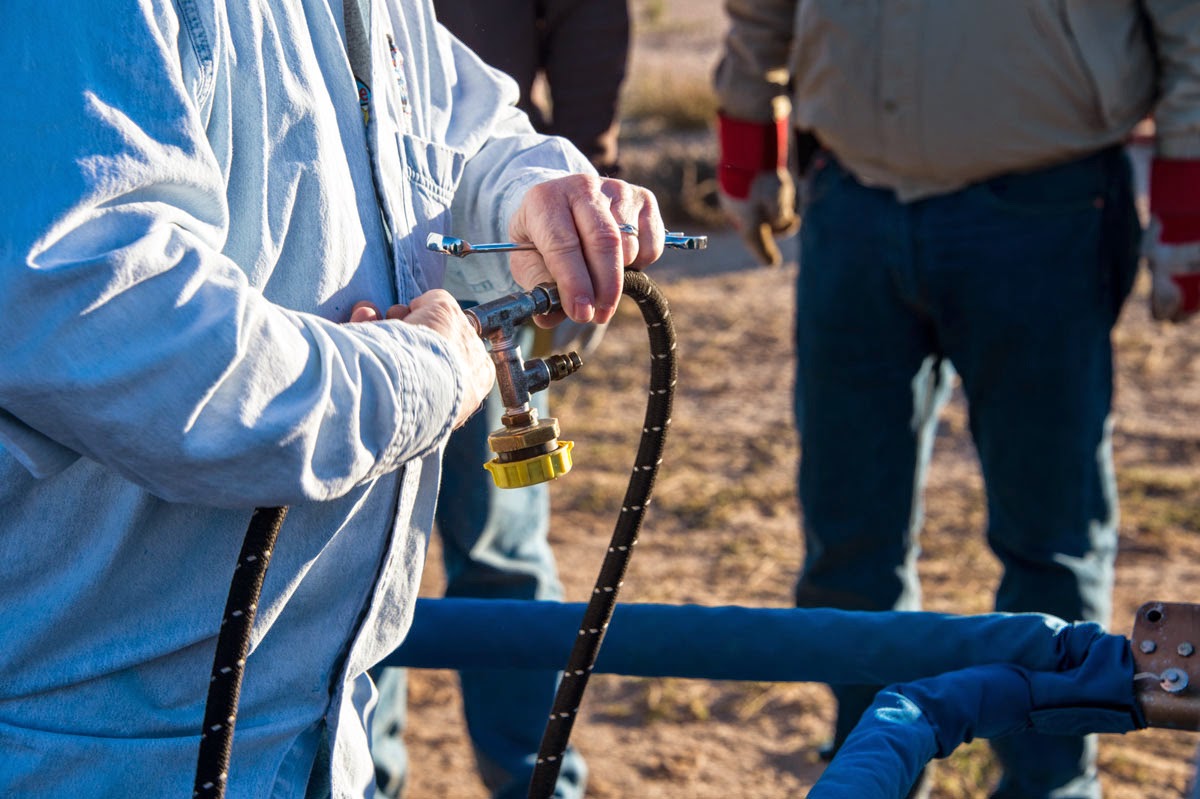 From here on I didn't get many pictures, as I was assigned the "throat" of the envelope for Chris.  You have to hold it open enough for the fan to push cold air into the balloon.  Once it has filled enough, the burners are hit to add HOT air, causing the balloon to stand upright with "weight on" (everyone leans on the edges of the basket, putting downward pressure to keep the balloon from leaving too soon!!)  Once the passengers are loaded, the pilot says "hands on" ... you hold with just your hands, then "hands off" and away the balloon goes!! 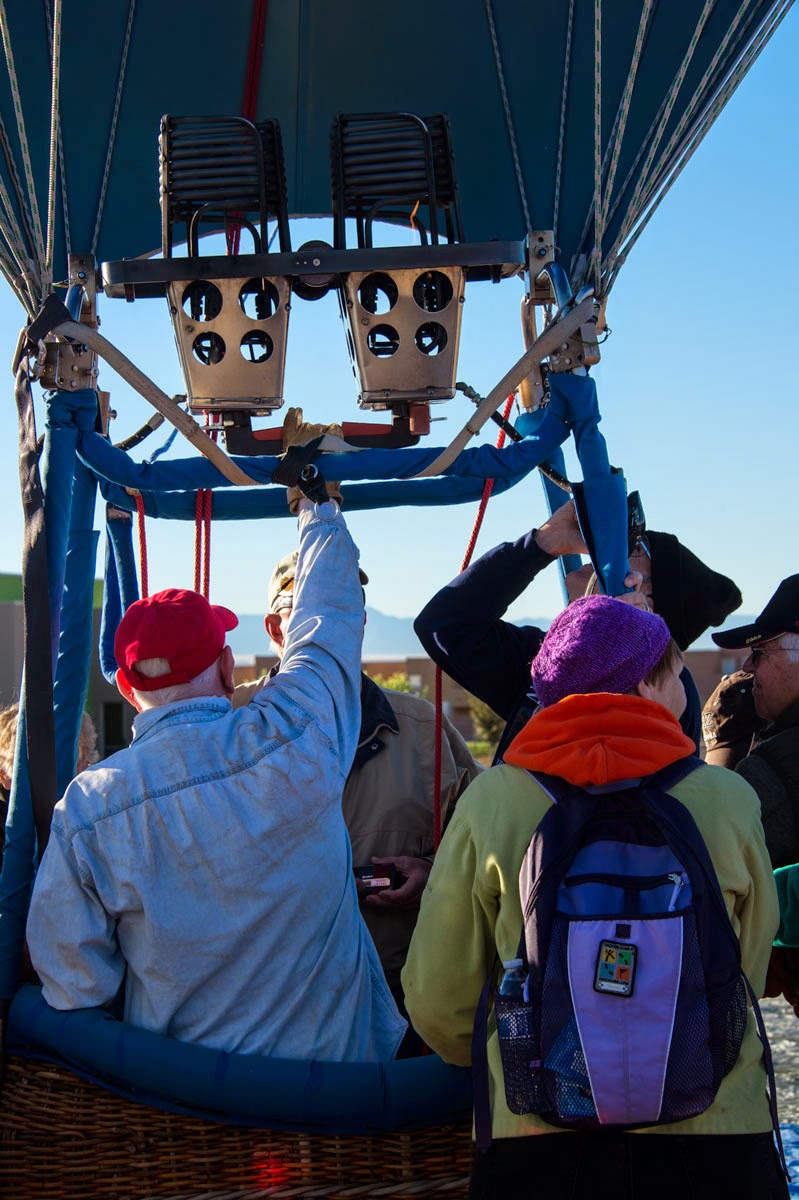 Chris and his passengers that I helped had already taken off, so I turned around to get pictures of Mike's balloon on ascension. 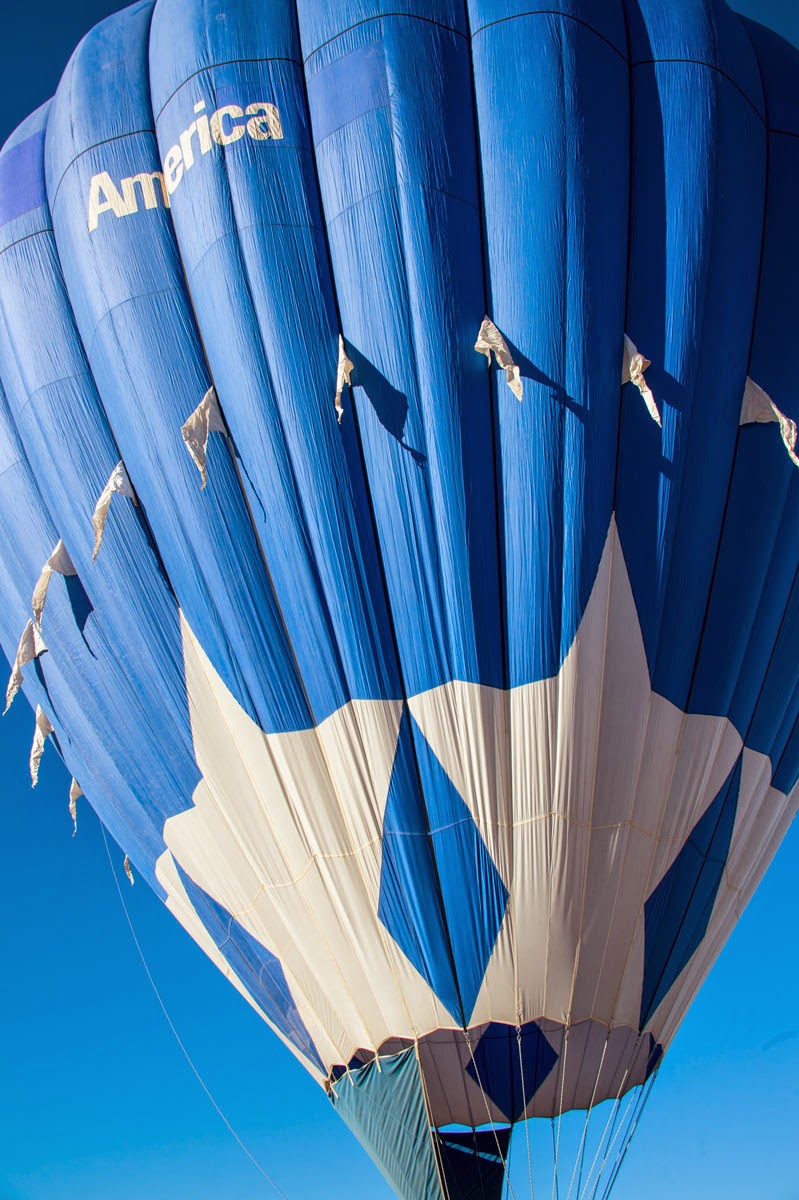 By now, Chris was directly overhead, as the winds began to carry him southwest.  We all jumped in the back of Anna's pickup and we were off!!!  A few miles away, Chris set down in a scrub brush plot where we waded through waist high tumbleweeds, until we could "weight on" and hold him down while changing passengers.  Once done, we stepped back and he again ascended. 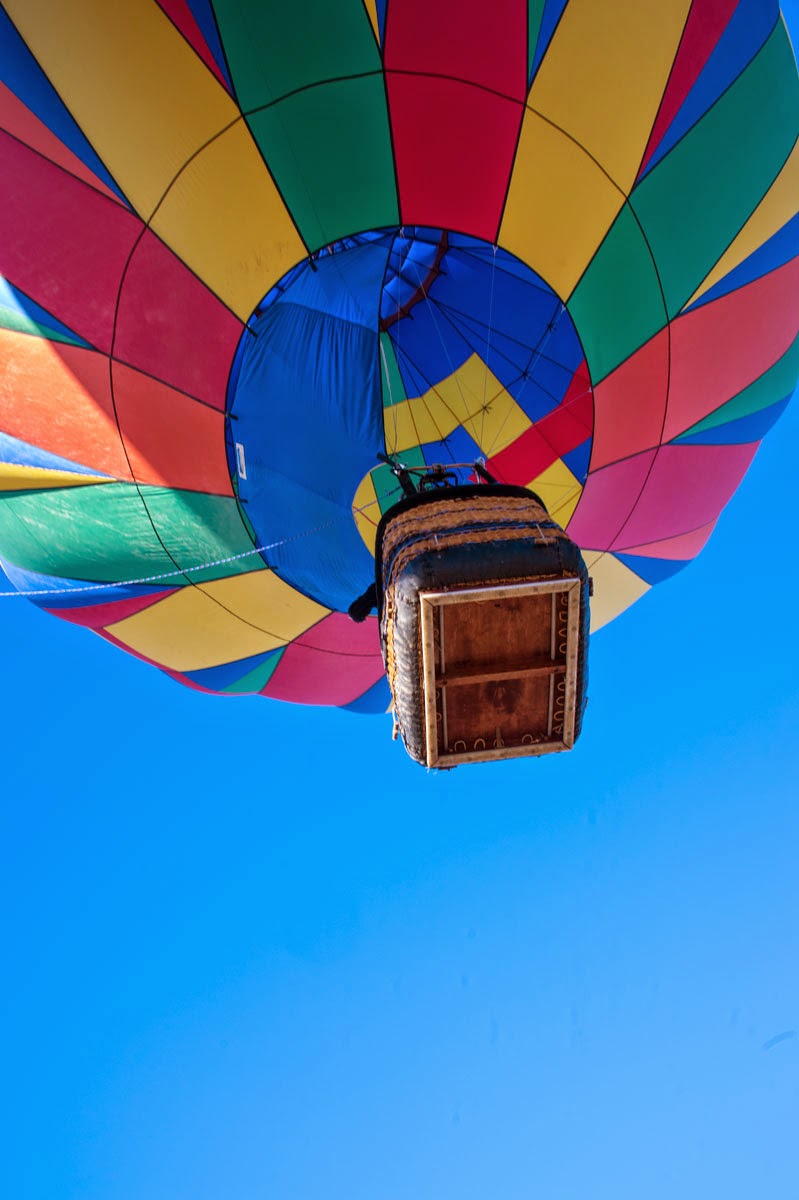 This time we had a little more trouble finding a place where we could drive to and he could land.  What a pilot ... he hit the spot and the basket never moved.  Course we all jumped on it, and once ready, we walked it over to where he could pull the crown cord and dump the air out the top.  From there, it was a madhouse to get the air out of the envelope, snaked and tied as you see here. 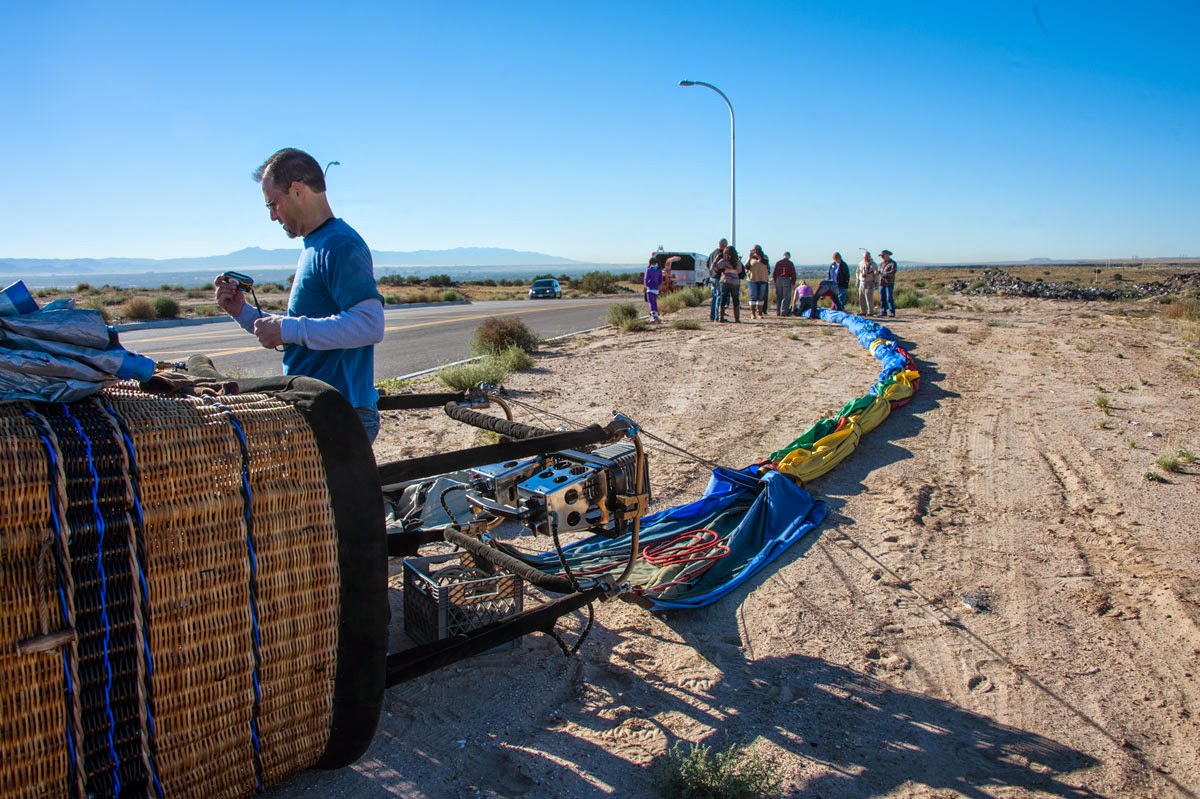 The burner assembly was removed, the enveloped packed in a large bag and the basket set upright. 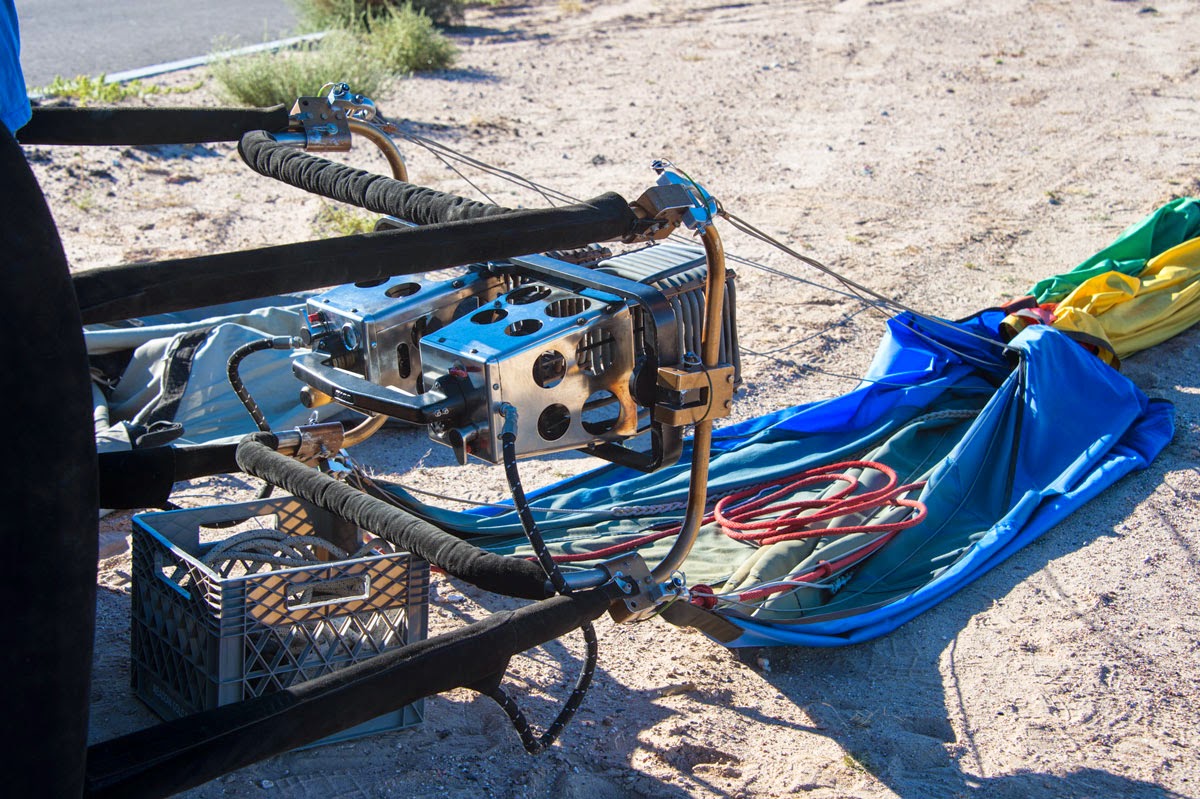 You get lots of waves, honks and "you guys are awesome" comments as you pack up all the gear. 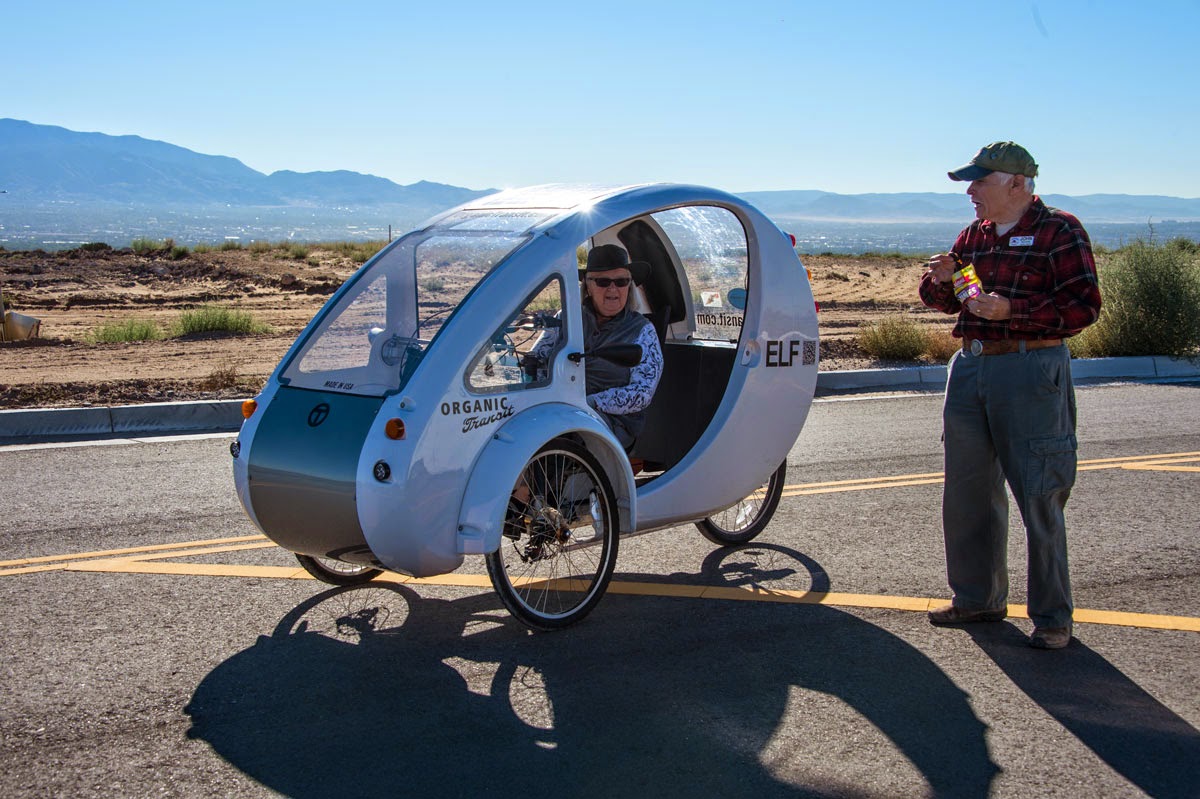 The final step was to load the basket and we were off to the tailgate party.  Most were anyway, I came back to the rigs so I could let the puppies out and the Westerfields went to the museum and merchandise stores before the big crowds hit.  Chris had plenty of family and friends to party with!! 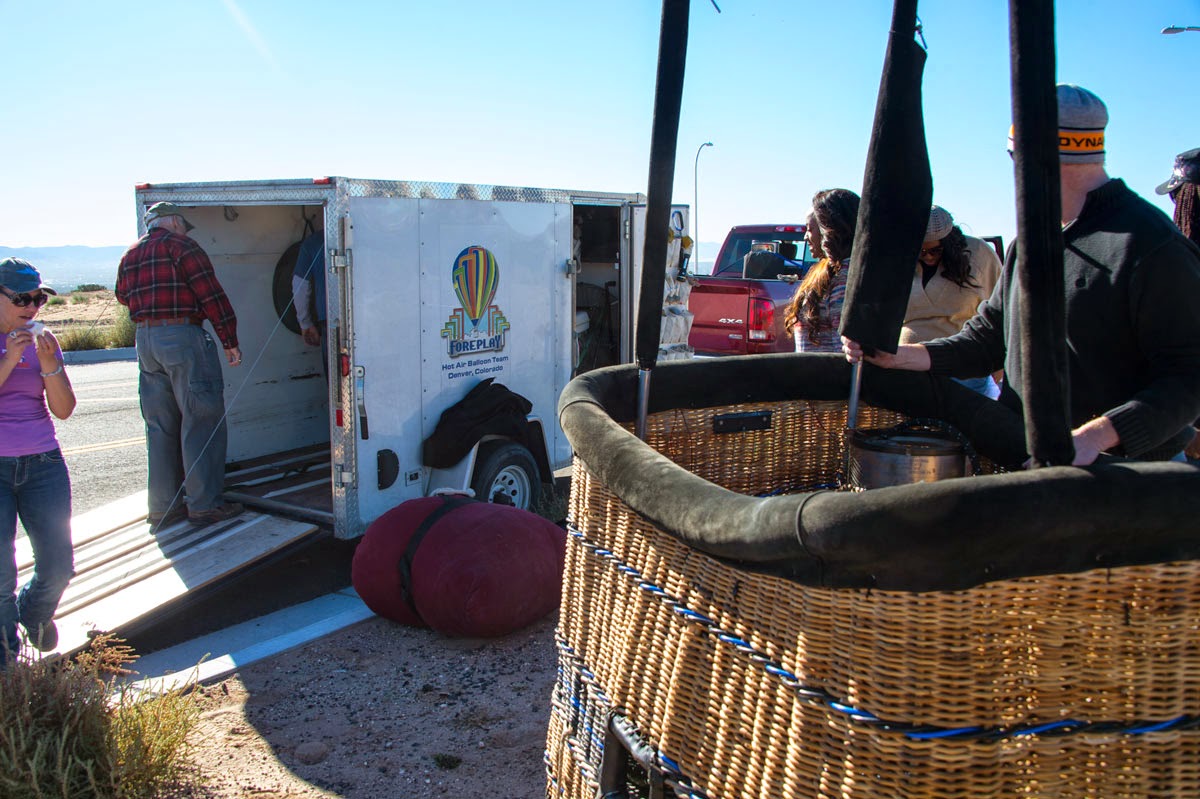 Once done, as Chris packed up, I remarked "this is like scuba diving ... you spend one hour getting ready, 45 minutes in the water and 3 hours cleaning up the saltwater mess".  He said that's exactly right ... except sometimes they get to ride the winds for a couple of hours.  I think this is something I might want to try.  Anyone out there want to volunteer to be my crew in the next few months?? 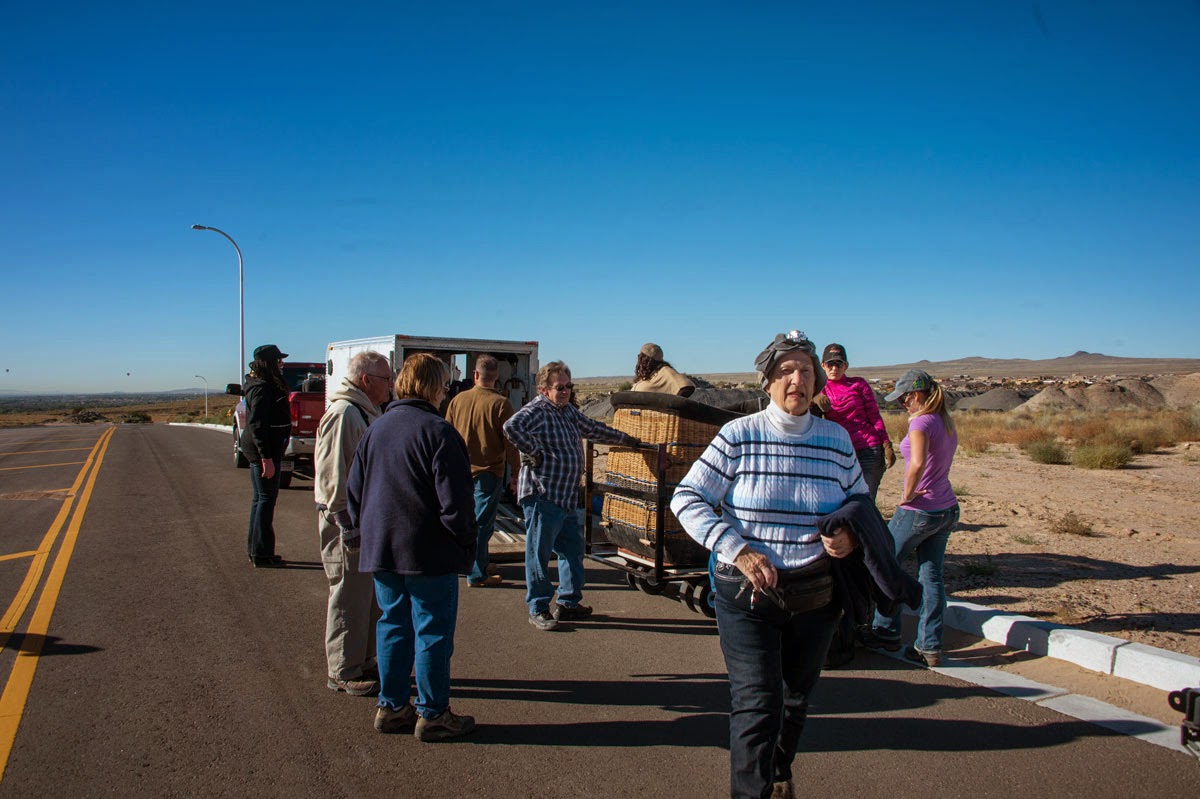