Who Said Cowgirls Could Cook??

It certainly wasn't me!!  I felt bad about that chicken soup disaster a few days ago, and I'm running out of room in the horse corral.  Maybe a nice quiche would make me feel better!!  I should have chosen something easier.  First off, I probably should have had all the ingredients the recipe actually called for before starting such an ambitious project.  Ham - check.  Eggs - check.  Milk - well I've got cream, maybe that will work!!

Somewhere I'm SURE my mom said you can just mix water with cream and basically it's milk .. but I'm here to tell you that is NOT the case!!  It looked beautiful, but by the time it cooled off, there was a layer of water on the bottom, made worse by the fact that I used Maple-Glazed ham, which tasted like chunks of candy, in the eggs that curdled.  Since I forgot to take the trash out to curbside for pick up, the quiche went to a watery grave!!  Big sigh .......

I really need to bake something I've done before so my heart isn't totally crushed ... banana bread!!  I made sure I had exactly the ingredients required and whipped up a batch.  I thought I would try baking them in the Breville Oven instead of my big one which uses so much more power.  They came out PERFECT!!!  Yay ... I feel better now!! 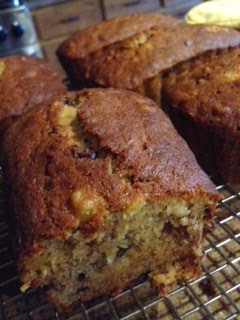 While in Albuquerque I picked up what's called a jelly roll ... not an edible one, but one made from strips of fabric that you sew together to make a quilt.  They had a sample in the store of an unusual pattern, so I thought I would give it a try.  You cut each of those fabric strips into different sized pieces, throw them in a pillow case and shake them up.  Then you pull them out one at a time and stitch them together randomly.  No fair peeking at the colors before you sew.  THIS was hard to do ... you have to give up control over what pieces go where ... the exact opposite of what quilting is usually all about!!  Here's my stack of jumbled mess after cutting!! 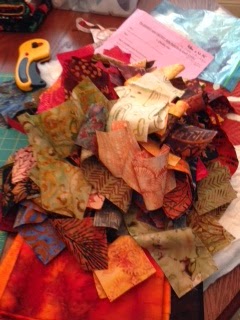 It took two days, but here they are all stitched together into one long strip.  Now to fold, cut and stitch until it looks like a quilt top.  It will take a day or two before you see it again!! 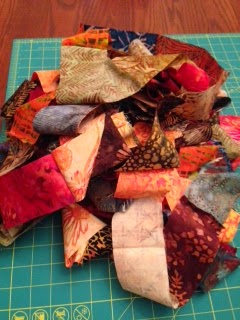 There's so much on my list of things to get done, it's almost overwhelming.  The rig isn't empty yet, nor have I made any appointments for it to see the doctor for an oil change and slide adjustment.  In the meantime, I HAVE made reservations for three more rallys and arrangements to help glue flowers on the Rose Bowl Parade floats in January.  Be sure to look for the City of Glendale float, since that's the one I will probably be working on.

I finally got in touch with another contractor, since the last one hasn't returned any of my four phone calls.  The windows at the ranch-house rental are falling down because the sill has rotted out.  I'm sure this will become another expensive repair project.  I've already dealt with the fact I won't get my RV cover for another year at least ... which may be a good thing if I decide to move.  According to my property tax bill, house values have risen a LOT ... so it just might be time to sell and get out of this awful one-horse town!!   One last totally uninteresting note is that I seem to have become allergic to my at-home laundry detergent (different brand from what I've used for 6 months).   It's the only thing I can think of that's different.   Yikes ... where's the Benadryl!!