But not for a date ... I'm late with the blog this morning because of "that darned internet"!!  I've had my computer for over 5 years now, and you know the more you upgrade, the more trouble you have!!  It just didn't like me this morning at all and I had to spend the last two hours rebooting.  Seems it couldn't find anybody home ... even though I know SOMEONE must be out there!!

The hullabaloo over the attempted murder has died down some ... the guy in the hospital is still in critical condition, but improving ... they think he will live, although he may not want to with one bullet still in his head!!  At any rate, I'm closing the door on that one!!  We have had lots of looky-loos driving by, but thankfully no one has stopped.

SO ... onward and upward with another 10 loads from the RV!!  This beautiful piece of granite countertop is a lazy susan.  What a great gift idea ... go to your local granite store and ask for the broken pieces ... glue a lazy susan apparatus to the bottom!!  Sell for big bucks!!!  OR just blue rubber bumpers to the bottom and add a small knife ... perfect cheese board!!

While on our trip, I think we saw an example of this flatware, at which time Barbara said that's what they had purchased, and was used by their son, Chef Jason.  At our Crew Party after the Balloon Fiesta in Albuquerque, here it was again ... hand forged steel with curly-ques on the end.  This would go PERFECTLY with my rustic cowboy kitchen, so I got on-line, found them on Amazon and had them shipped.  LOVE them!!!  Just to show you how well designed they are, when you don't know which side of the plate they go, just look at the curly-ques on the end!!! 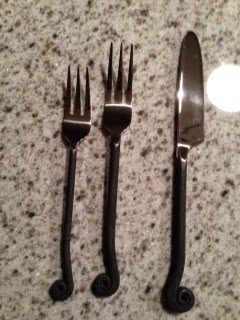 Like everyone else at the Crew Party, I decided to recreate the chicken soup for my World Series Baseball Party of One!!  After the first disaster, I went to the store and bought all fresh ingredients!!  It came out wonderful!!  There's even a piece of chili cheese cornbread hidden at the bottom ... the bread is just for looks!!!  It was YUMMY!!  The game couldn't have been any better either!!  GO GIANTS ... WE WON THE FIRST GAME!!! 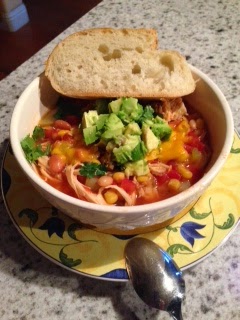 Another thing on my list was this Breville Oven.  This is the one Miss Terry cooks all her wonderful cookbook recipes in  ...  Miss Terry's Kitchen!!  My old toaster oven was on it's last leg, so I figured I'd give it a try ... maybe I won't have so many kitchen disasters!!  It's big enough to cook a whole chicken, but not too big for the rig.  If I can find room for it, I would love to take it on the road!! 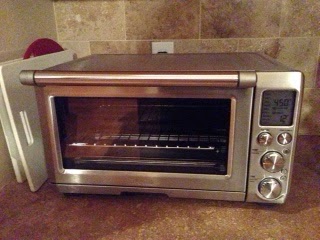 This is the Kachina I found in Williams that was so well packaged it took me 30 minutes to get it unwrapped!!  The White Ogre ... he fits in to by Cowboy and Indian family room very nicely!! 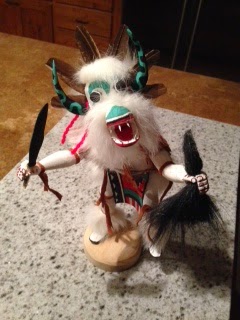 Lastly, here's the Boomer group that crewed for the Balloon Fiesta in Albuquerque.  Quite a big group ... and a blast to be around!!  Even though many of the Happy Hours and the Potluck were cancelled due to rain, we still had a great time!!  Come on out next year and join the FUN!!!

I expect there will be a few more loads from the RV before I start the maintenance work ... and lots of errands to run, along with a huge box full of mail to wade through!!  Hopefully no excitement today!!

Posted by Nancy Kissack at 7:47 AM