At least it was the last day for us to crew.  Bright and shiny, we arrived at the launch field, yawning and wondering why we were subjecting ourselves to this ... but the beautiful balloons soon put those thoughts on the back burner!! 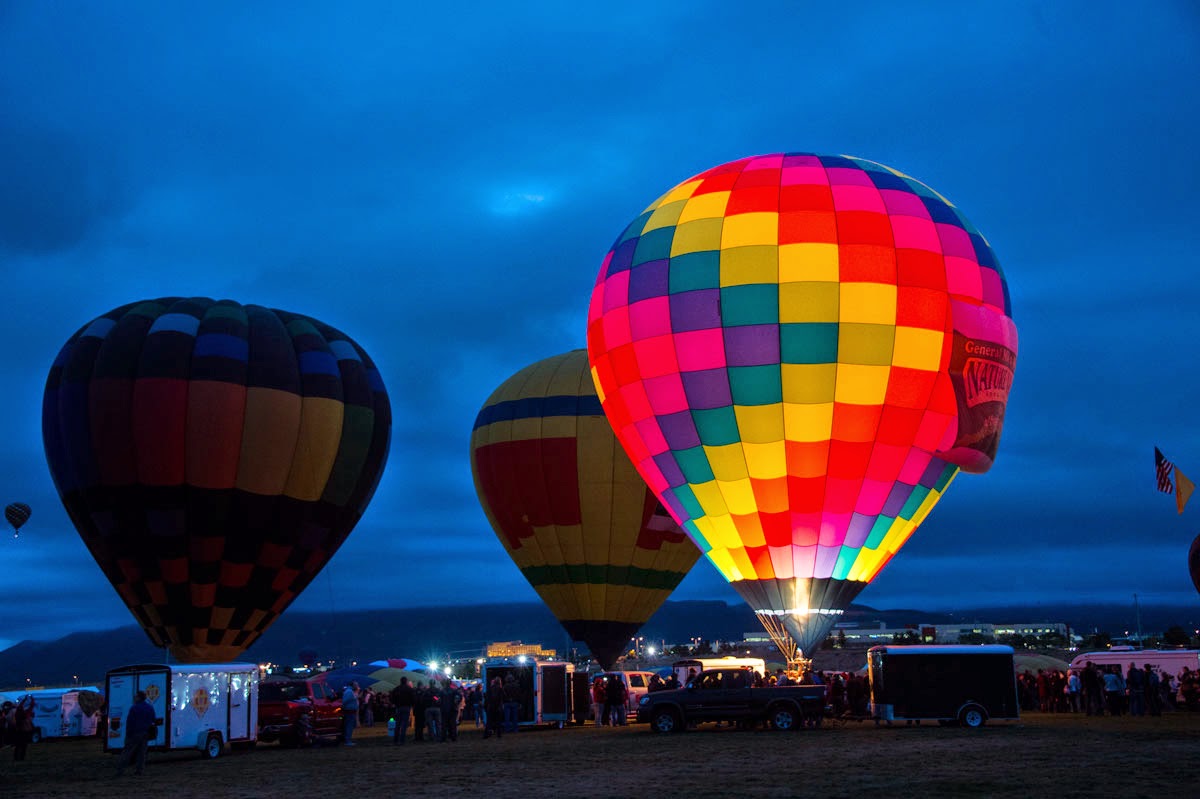 In case you were wondering, there are many, many, many porta-potties for your convenience, located all around the field.  The cardinal rule when you are crewing, is ALWAYS stop on the way out of the field, because it may be HOURS before you return.  This was one of those days!! 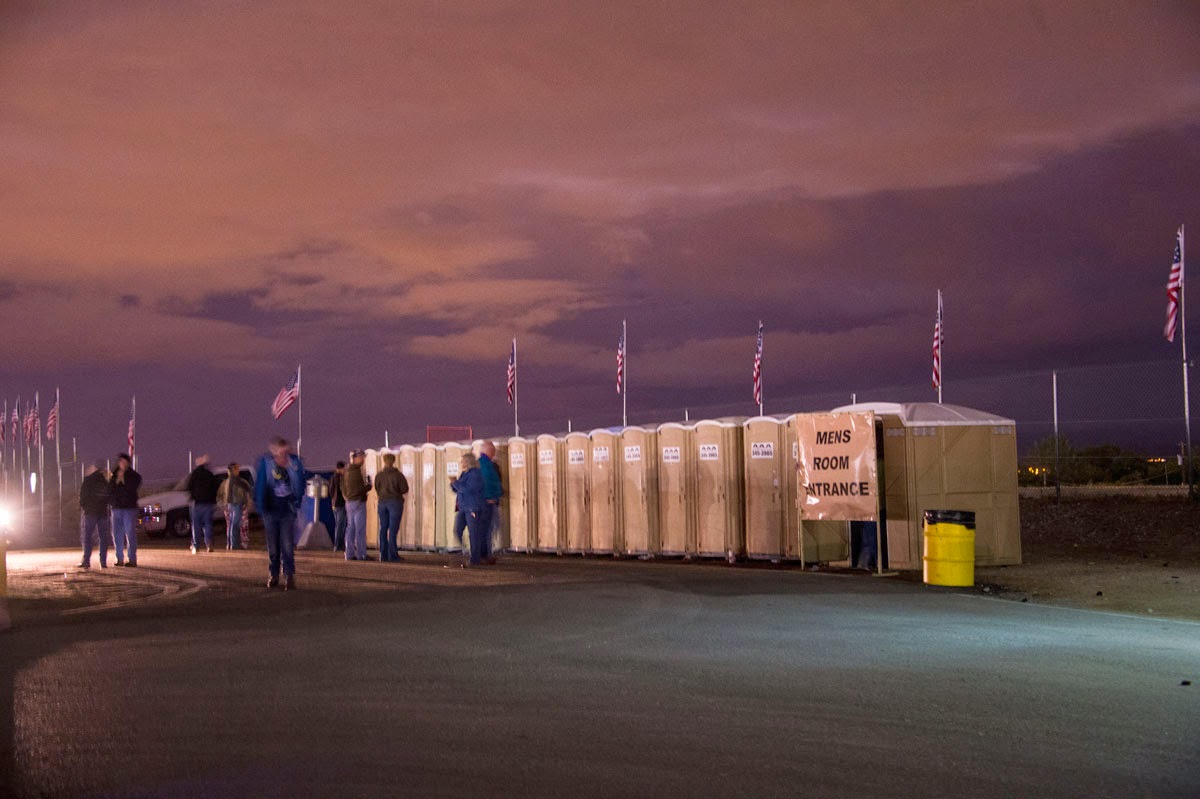 Although we were supposed to go with the second wave of pilots launching into the clouds, the Zebra (on-field official) said we should launch first.  In no time at all we were ready to send Pilot Richard and his two University of New Mexico sophomores (they worked at the hotel where he was staying) off into the questionable weather. 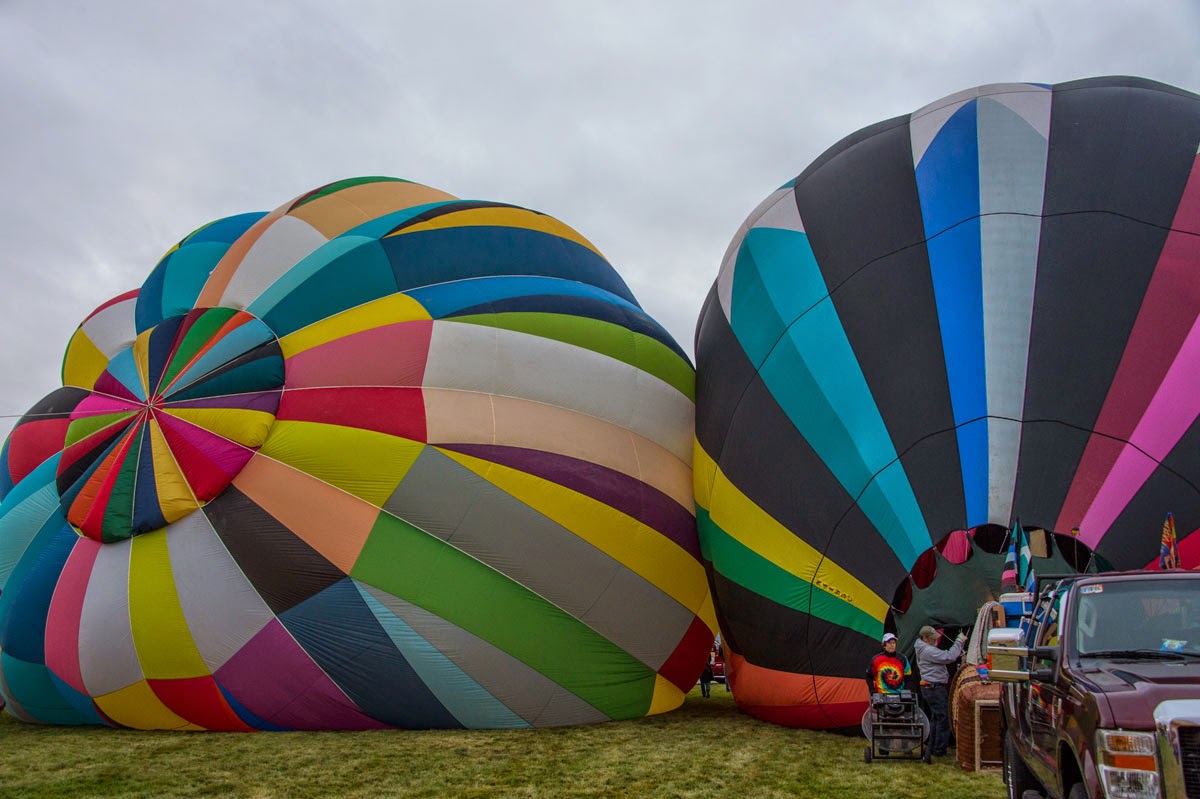 As you can see, it was terribly overcast.  Clouds don't keep pilots from flying, but lightning and rain does!! 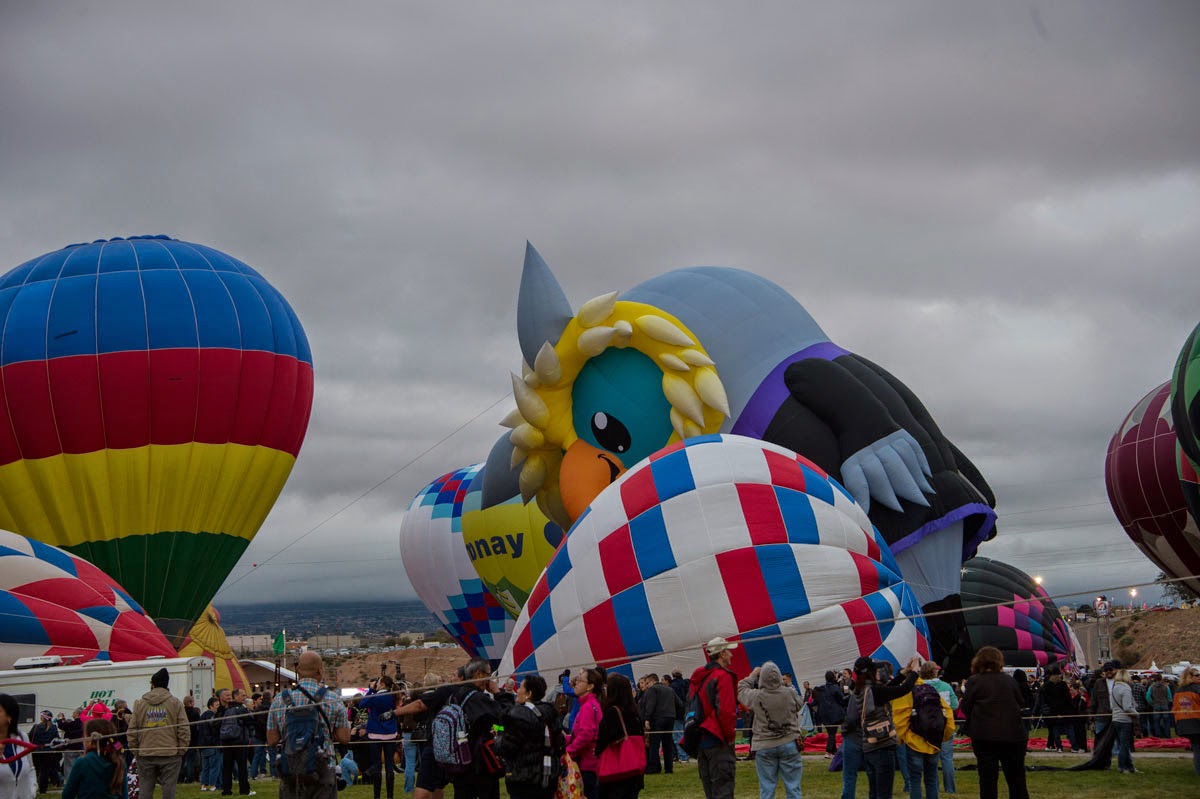 With practically no wind at all, we watched them rise up into the air and remain practically motionless!!  Yikes ... what happened to the wind??  The tower said South winds ... but there seem to be no winds at all!! 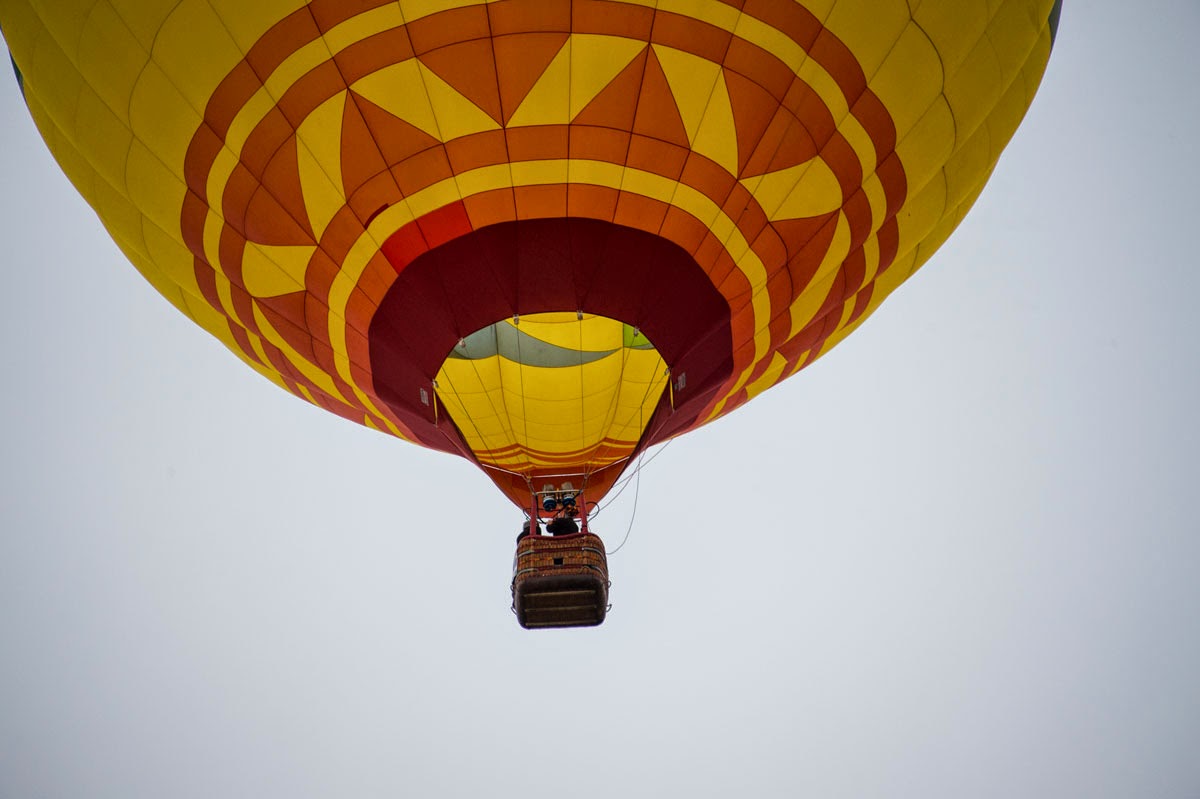 As we left the field on the chase, we saw this Panasonic Battery balloon!!  Pretty cool!!! 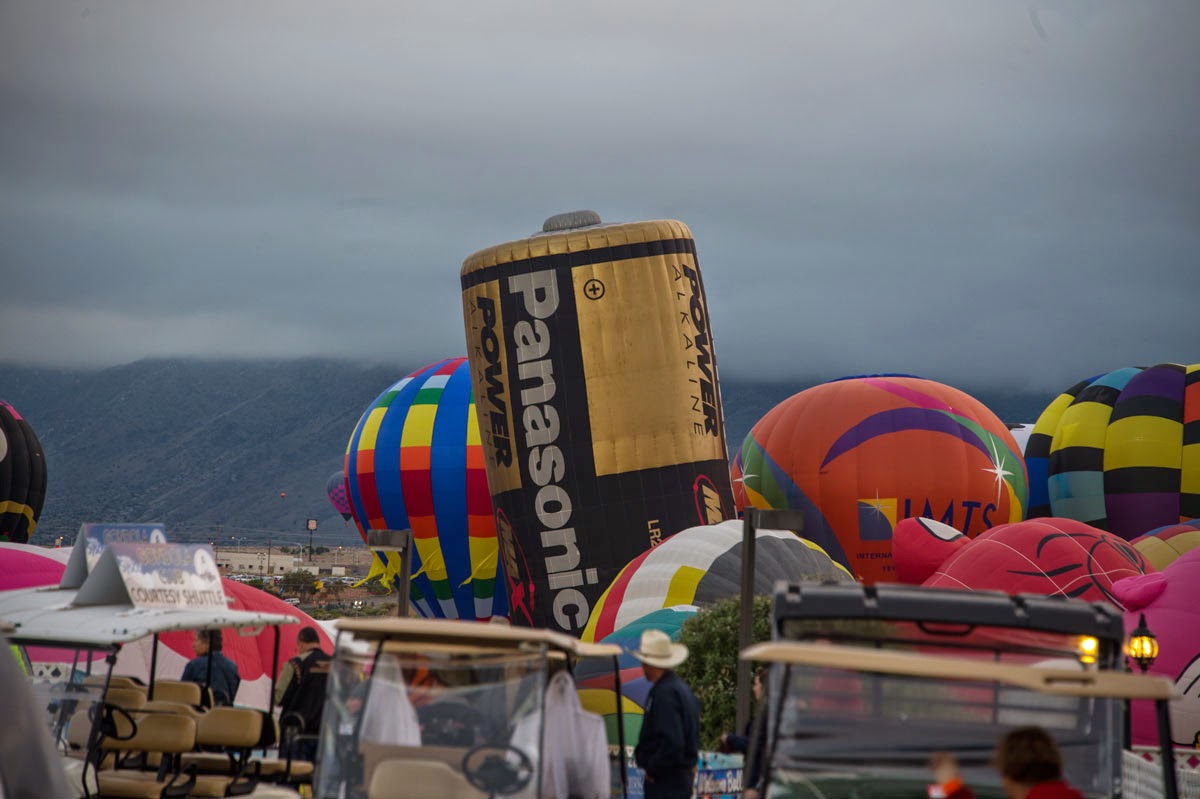 As Jeff talked to Richard on the radio, we headed West to the little town of Corrales where we launched the day before.  Richard did a splash 'n dash for the kids, but when he came out of the river, the winds started taking him North ... along with all the other balloons that launched this morning.  That's NOT good ... because North lies the Indian Reservation where you are NOT allowed to land.  If you do, you have to call the Reservation Police and request a special escort.  Uh oh ... we quickly turned around and headed back to the field, then North, following hundreds of balloons to the RED "No Land" territory on the map.  The problem was, every other lookie-loo and chase crew were trying to do the same thing.  Almost two hours on a five mile stretch of road!!   By our tracking devices and the radio, we knew Richard had landed the furthest North, maybe one balloon ahead of him. 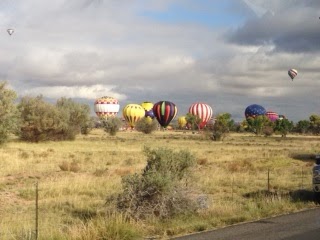 The problem was, we couldn't GET there!!  To keep from getting in trouble with the Reservation Police, many had landed right on the road, or between the train tracks and the road, as you can see here.  That created a HUGE traffic congestion, even stopping the train!!!  But at least they weren't going to be involved with the Pueblo Police!! 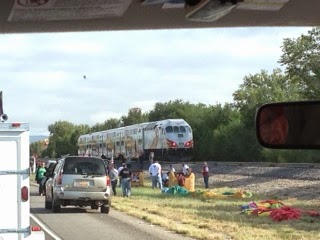 At long last, we arrived at a gate where Richard said the property owner would drop him off.  We were so long in getting there, he had deflated the balloon in a hay field and the storm had passed by.  The Native owner wasn't happy, and had to chase many other balloons besides ours.  The result was that literally hundreds of balloons landed on the Pueblo property ... something that has NEVER happened before.  Amazingly, at the pilot briefing the next morning, there were NO complaints from the Reservation!!  It seems the Natives here are still unhappy about us white folks taking their land ... can't blame them I guess ... but the pilots all handled their situations with diplomacy!! 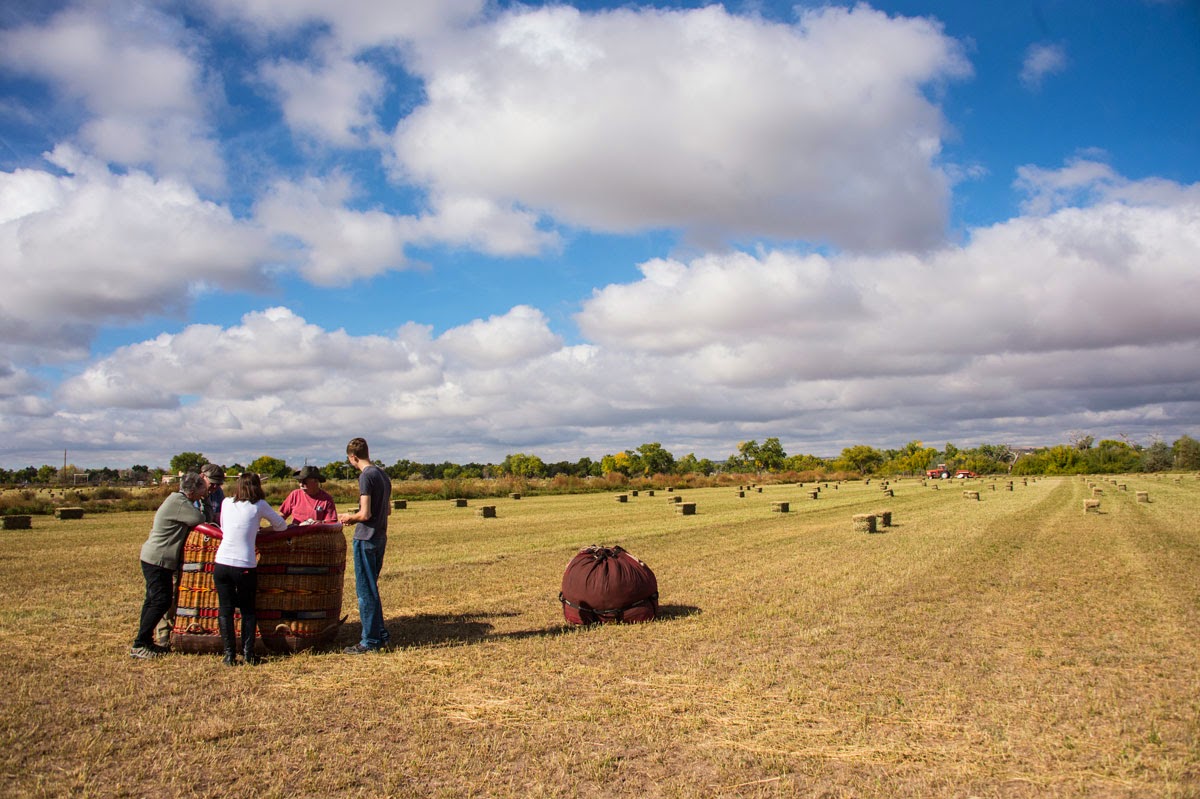 The actual last day of the Fiesta, the weather was even worse ... high winds and rain showers, so even though we were on the field at 5:30 am, Richard chose not to do a static display (fill the envelope with air but keep it tethered to the field) ... which meant we were done, except for the Crew Party at noon, which was a blast!!  Did I mention we brought all the leftover desserts to my rig for a Boomer Dessert Feast??  Here's a picture of our Hostess Michelle on the right, taken with Gail's camera. 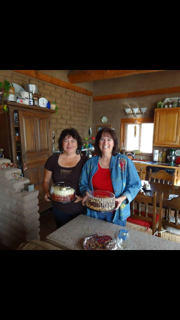 Still at the RV park, Barbara, Tom and I went on a geocaching marathon yesterday, to get 9 of 10 Open Space caches in order to receive a gold coin!!  I think we walked 5 miles, and I know we drove 40, circling all around Albuquerque, even up into the mountains.  Who knew there were so many neat quiet spaces in such a big city!!  At one of the first, we found this beaver lodge at the edge of the pond!! 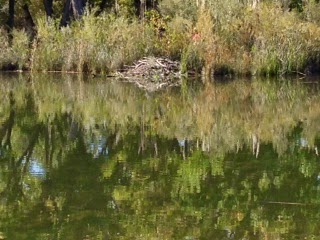 This beautiful walk into the mountains with an unsurpassed view of Albuquerque, ended up at this blind where you can look through the windows at the pond below. 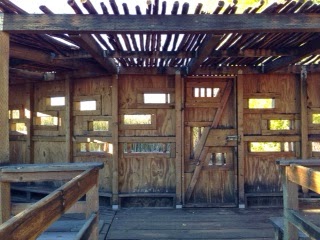 They have lined the pond so there will be water here year round from a small spring, providing sustenance to deer, mountain lions, frogs and whatever else lurks here.  This is the view out one of the little windows.  The trail to the top is wheelchair accessible too. 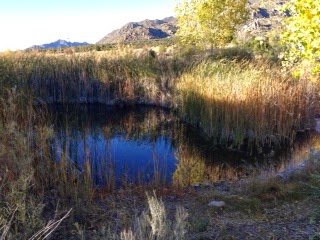 Here's a couple of the things I purchased at the Fiesta ... you KNOW I have to have mementos!!  Just like Disneyland, they have hundreds of pins here, along with Pin Trading time during the week. 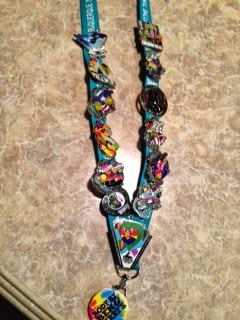 And who could turn down this beautiful jacket??  It's actually much bluer in real life.  The Boomers took up a collection and got Judy Rinehimer one just like it in black as a thank you for all her hard work setting this up. 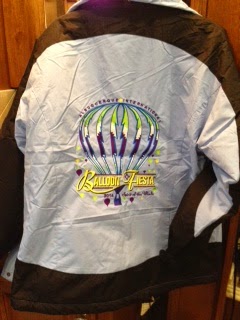 And so our Albuquerque Balloon Fiesta time comes to a close.  This is one of the highlights of this trip, and I hope everyone signs up next year to experience the same, but sign up EARLY, as the spots go quickly ... taken up by everyone who has been here before!!!

Today we pick up our Open Space coin before heading to Gallup New Mexico!!
Posted by Nancy Kissack at 6:14 AM