Twenty Five Trips To The Rig And Back!!

There is one ugly truth about motor homing, whether part time or almost full time ... eventually you have to unload all that STUFF ... not only what you purchased (the fun part), but what you use in every day life ... like the refrigerator.  I have a huge lightweight horse feed bucket (really it's for ice and beer) that helps, but I still made over 25 trips up and down the steps, and I'm not even close to being done!!  Leaving everything in the rig and just having doubles, isn't an option.  Those pesky "use by" dates result in lots of trash.  Unfortunately yesterday, I should have tossed MORE stuff out!!

First up was to haul my VERY heavy piece of marble to the island counter top.  Perfect for chocolate and pie dough ... even better for pictures!!  Then it was time to recreate that amazing chicken soup we had in Albuquerque.  My chicken was probably past date too ... a little freezer burned around the edges ... but I didn't want to waste it.  I chopped it up and in the dutch oven it went.  With onions, a can of chills and lots of spices, I was ready for the chicken broth.  YES I checked the date.  Trouble was, it had been in my fridge a tad too long.  As I poured it in the pot, big chunks of gunky mold came out ... all over my chicken!!!!  I almost threw up!!  Well ... there went my chicken soup idea.  I don't think I'll eat chicken soup again!!  I would dump it in the garbage but my gardeners were nice enough to fill my trash can with grass ... which will cause me a big fine!!  I can't get the grass out until the two big guys come back to lift the can ... so the chicken soup went the way of many of my meals ... buried in the horse corral!! 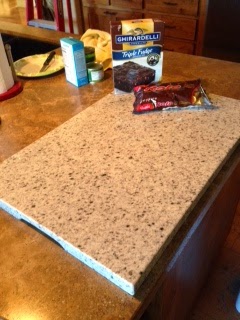 To renew my senses and get rid of that choking feeling, I decided to make Pioneer Woman's brownies.  At least THIS turned out better!!  The recipe is a little weird, but the results were amazing. 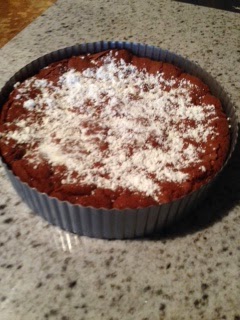 That's cake mix (one trip to the rig) evaporated milk (second trip), butter, peanut butter cups and rollos (third trip) with a few macadamia nuts (fourth trip) thrown in for good luck.  It was DELICIOUS ... and my dinner!!  I had a little leftover "frozen" cool whip, but ice cream would have made it EXTRA good!! 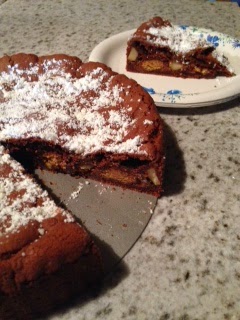 Most of the fridge is empty and all the dog blankets are washed, but I haven't been able to get to the under-bed storage yet.  On one trip I grabbed this guy ... my mascot since I haven't been able to find a stuffed buzzard!  I found this beauty in Albuquerque at the Open Spaces gift shop.  Remember all that geocaching??  What makes this guy so unique is that he's a hand puppet whose head turns AND you can make his eyes blink.  I know ... I'm a sucker for unique stuffed animals!!! 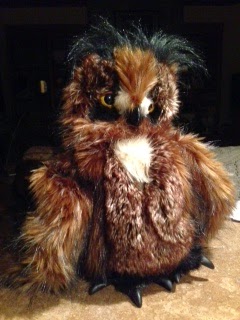 That's when the REAL disaster hit!!  Since most of my outside lights were burned out ... even though I bought the ones that last for two years to replace the old ones when I left ... I went to the garage to get one of my ladders.  YIKES!!  Was there an earthquake I didn't hear about???  Seriously ... the entire wall of cabinets in my garage tore away from the wall.  To my astonishment, they were sitting on a five inch lip of concrete around the edge with TWO ... count them ... ONLY TWO screws holding them to the wall ... or at least at one time they were attached to the wall. 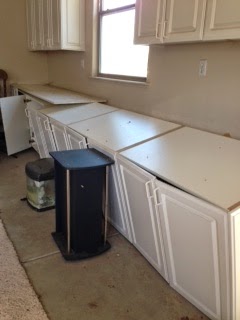 The only thing that saved them was the old aquarium stand that happened to catch the lip of the door and keep the door bottoms from smashing on the concrete.  These aren't the cheapest cabinets, but they're close, so that would have been disaster.  At the far end, the sheetrock has been damaged pretty badly.  The problem is that I can't get the doors open to remove the boxes inside ... and I can't push them back up because of the weight.  I guess I'll have to call Superman for this one!!!

Oh ... and then the garage door opened ... but wouldn't close the door.  I know you can pull the little rope and release the latch ... and I can't leave the door open.  So I climbed up on a chair (my first mistake ... you know where this is going, right), grabbed the little handle and VERY carefully pulled it to release the door, hanging on for dear life as the weight of the door took it down the tracks.  CRACK!!!!  The stupid little handle broke, I fell off the chair and the door hit the ground with a BANG!!!!  Gee whizz (not really what I said) ... I hope I didn't ruin the door, as I limped back to the house, my recently broken toe screaming at me.  Today I call the repair man for that!! 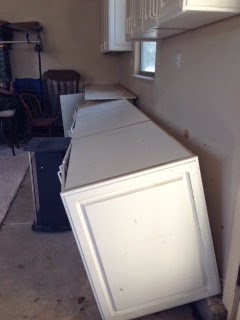 All this excitement wore us out!!  Today I'll make up a list of things that need fixing and get on the phone.  At least I have an entire pan of brownies to console myself with, as I AGAIN make a trip to the rig looking for the leftover ice cream!! 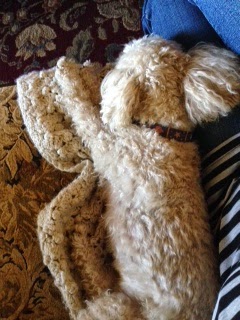