Heading On Down The Road ... For REAL Tacos!!

Just before we left yesterday morning, we had one more cache to pick up before getting our Albuquerque Open Space coin ... a gorgeous one at that!  The last cache had three stages.  You find the first part, then count certain letters to give you the coordinates of the next stage.  Plunk those into your GPS device and it takes you there.   We were a little off on the last one, but found the box anyway.  Barbara then put on her Corvette Racing Team hat and we hotfooted it to the Visitor Center to pick up our prize. 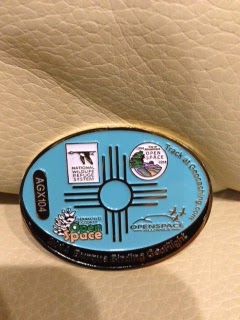 Most of the nine caches were along the Rio Grande River and almost all required at least a half mile walk.  We certainly got our exercise on this one!! 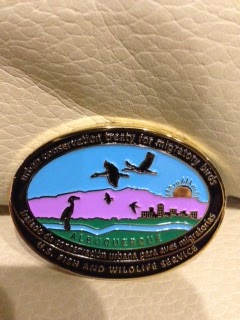 Along the way we caught site of two beauties ... one of the reasons these open spaces are here ... roadrunners!!  They tried to keep the bushes between us and them, but as Barbara walked one way and I the other, I caught this one on my iPhone camera.  She blends in pretty good!! 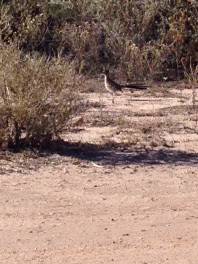 By now it's 10:15 and we have to be out of the parking lot by 11:00, so we took a shortcut that I'm sure had us on two wheels around the corners, and made it back just in time!!  Actually, we had time to spare ... hooked up and headed West.  This overpass looks like someone left their trash on the railings, but up close it's beautiful designs.  You don't see THAT in California!! 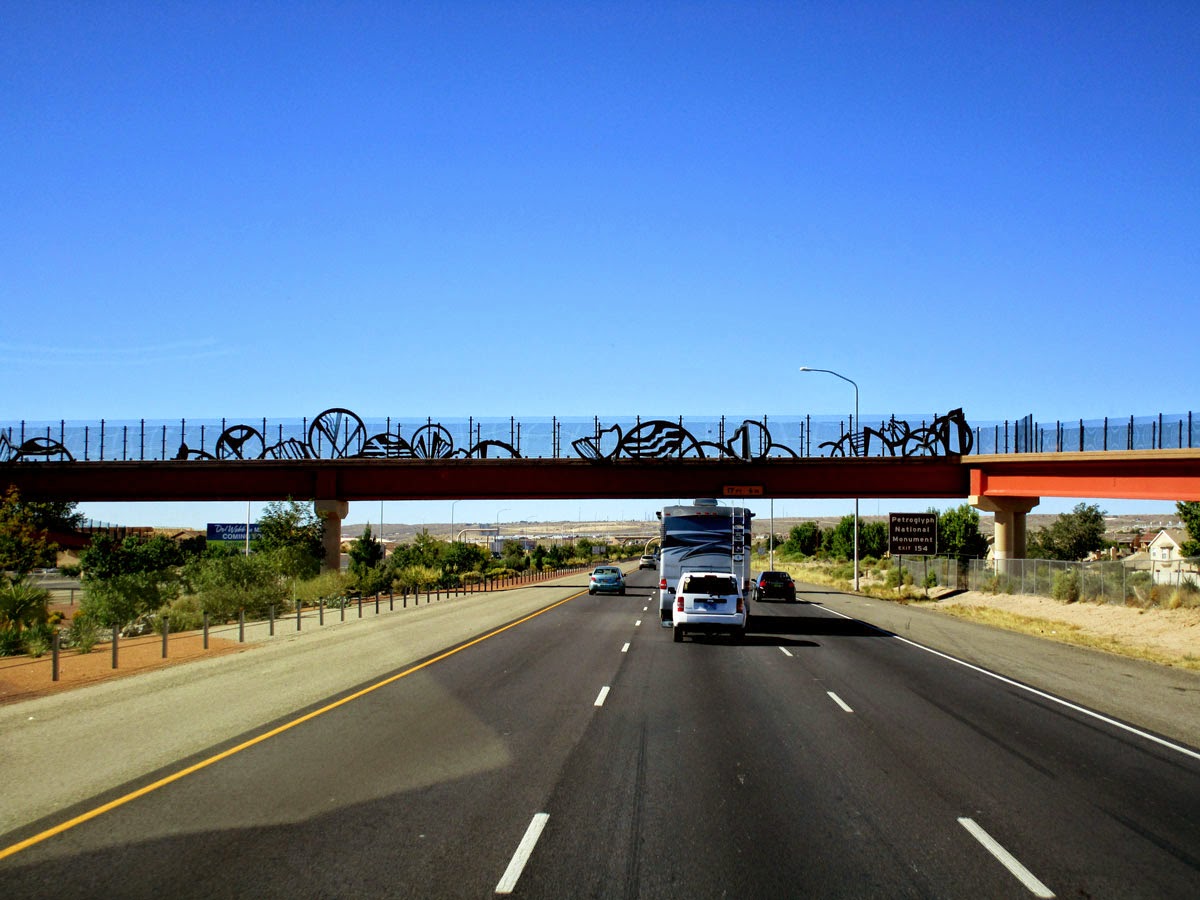 We are again following Route 66 West, as evidenced by the old bridge.  Sure looks like it's only wide enough for one car, but then I guess there wasn't much traffic back then!! 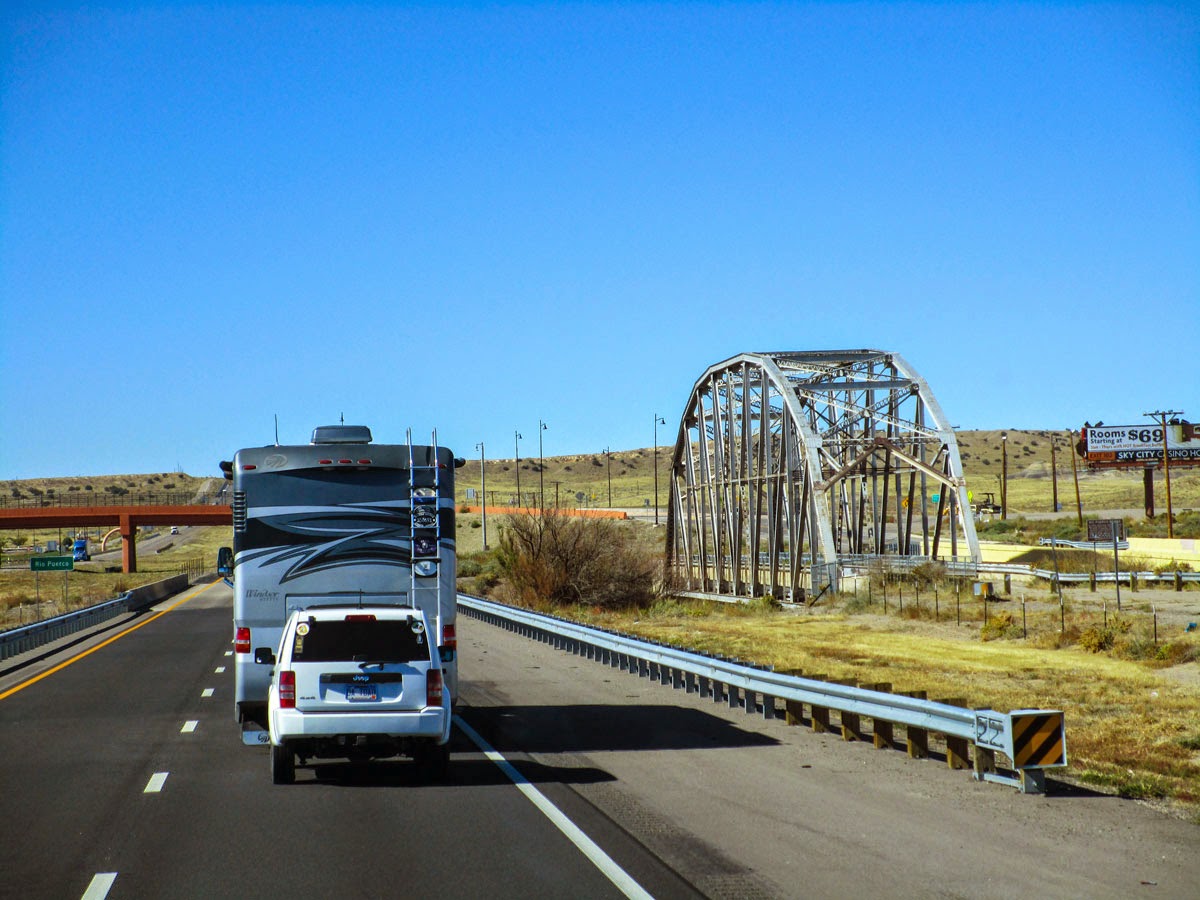 All the green we saw on the way out has turned yellow and brown, but the mesas are just as spectacular.  I learned  ... somewhere ... that this was a sea bottom, hence the Sandia Mountains, which have provided lots of fossils.  Oh of course ... it was on one of the geocache hike signs!! 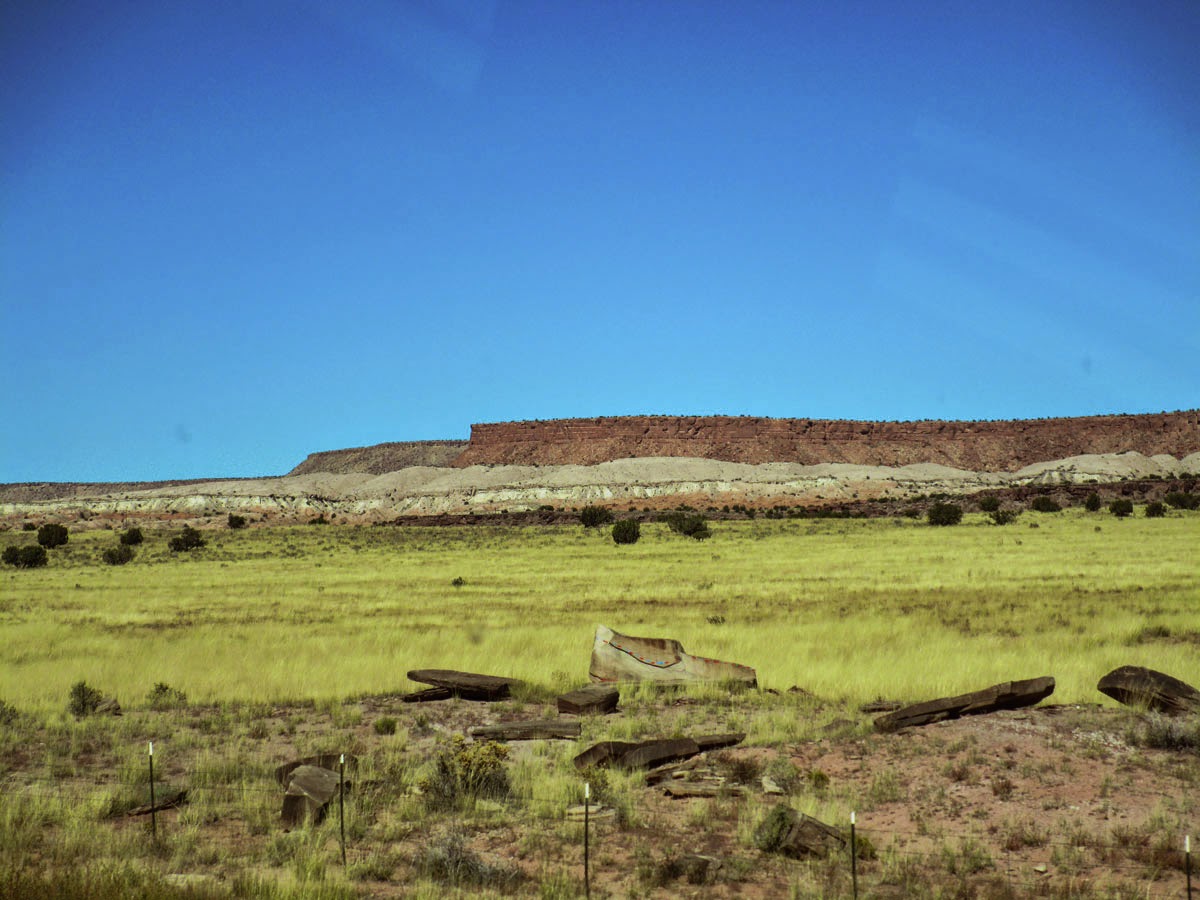 Our first stop was Gallup New Mexico.  When we came through here (last year was it??)  or maybe it was only 5 months ago ... I purchased a coral bracelet, which lost a stone.  Luckily it fell in my lap.  I had purchased it at Richardson's Trading Post ... the best place EVER for turquoise jewelry, or anything native related for that matter ... and wanted to see if they could repair it.  Talk about service ... she took the bracelet, walked it to the jewelry store where they have repairs done, and brought it back, all in about 30 minutes!!  Tom had a bracelet he wanted to exchange for a watch band, and Barbara found an amazing pair of coral earrings.  Talk about dealing!!  Larry, the owner, is the nicest guy ever ... and he made them a deal they couldn't refuse.

In the meantime, the lady that worked on my repair, took me to the back room to look at headdresses. I had seen a couple previously and was just curious what they cost.  OH MY!!!  You should have seen that back room!!!  Or rather FOUR rooms ... full of trade goods and of course the most magnificent Cherokee Headress imaginable!!  I doubt they would turn down ANY deal ... because I made them an offer and he took it immediately!!  Unfortunately, it had to be boxed up to keep it from being damaged, so you'll have to wait until I get home to see it, but I promise, it's fabulous!!!

THEN, while waiting for Tom to try on watchbands, I was sneaking peeks at the same case.  He tried on one, but it was too small ... a ladies band they said.  Boy did my ears perk up!!  As Tom and Barbara left the showcase of old pawn, I sidled up to the nice lady and asked to try it on.  It fit perfectly!!!  I almost had a heart attack when I looked on the back at the price!!  She pulled out some papers where she had numbers written and pointed at one ... 1/3 of the high price.  Okay, that's a possibility!!  Then we walked back to see Larry's wife, and she said since I had already purchased the coral bracelet last time and the headdress THIS time, she would give me an extra special deal.  I'm sure they still made a chunk on it, but I got it for a reasonable price for me!!  Isn't it gorgeous??  Now I just have to dig through my old watches and come up with one that fits. 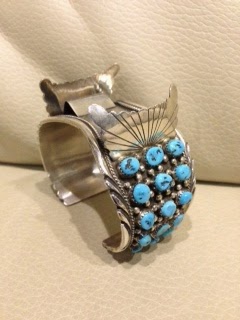 With all our trading, we were starving!!  Barbara found a Tamale Factory on Yelp with a huge number of stars.  It was way off Main Street, a tiny space with us as the only customers at 4:30 ... but the food was amazing!!  We haven't had good Mexican food for a long time and these carnitas tacos hit the spot.  Barbara had a stuffed (with chicken) sopapilla that she loved ... and Tom scarfed down steak tacos!!  Check it out the next time you come through Gallup. 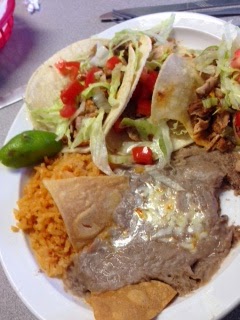 So today I'm planning on heading home.  The Great Adventure is coming to a close, which is sad, but boy do I have a lot of fantastic stories and memories.  I'm already planning the next big adventure!!