MURDER OUTSIDE MY BEDROOM WINDOW!!

Nice title for a mystery book, right??  Unfortunately, it actually happened at my home yesterday just before noon!!  I know .... CRAZY, right???  Well let me tell you, love can make you crazy I guess, and it doesn't matter who you are!!

Here's what happened.  I was up early as usual, wrote the blog and was getting ready to go to the store.  When I went outside to the garage (opposite side of the house), I figured I would try to fix the broken garage door.  Sure enough, I was able to get it working again.  Seems when the door opened, it dropped a bunch of trash in front of the "eye".  Once I cleaned up the tracks, and the sensors, then used a shovel to push the door up high enough to latch, I pushed the button and it worked fine.  YAY!!  So off to the store I went about 10:30.  I remember seeing a white pickup parked in front of the house next door, but that's not unusual.

On my way home at 11:45, a police car went screaming by and stopped in front of a church located about a mile from my house, where a black gentleman was being arrested.  That's when the SHERIFF'S car went by even faster, with lights and siren going.  As I followed him, he turned down MY street.  There were Sheriff, Highway Patrol and Fire Department vehicles everywhere with guns drawn.  As I slowly walked up the street, neighbors said to get back ... someone had been murdered in the driveway between my house and my neighbor to the East.  HOLY COW!!!  I was thinking it was either my neighbor or his kids, but I saw Nick standing ... so it wasn't HIM who got shot ... and I was filled in on what HE knew ... which wasn't much!! 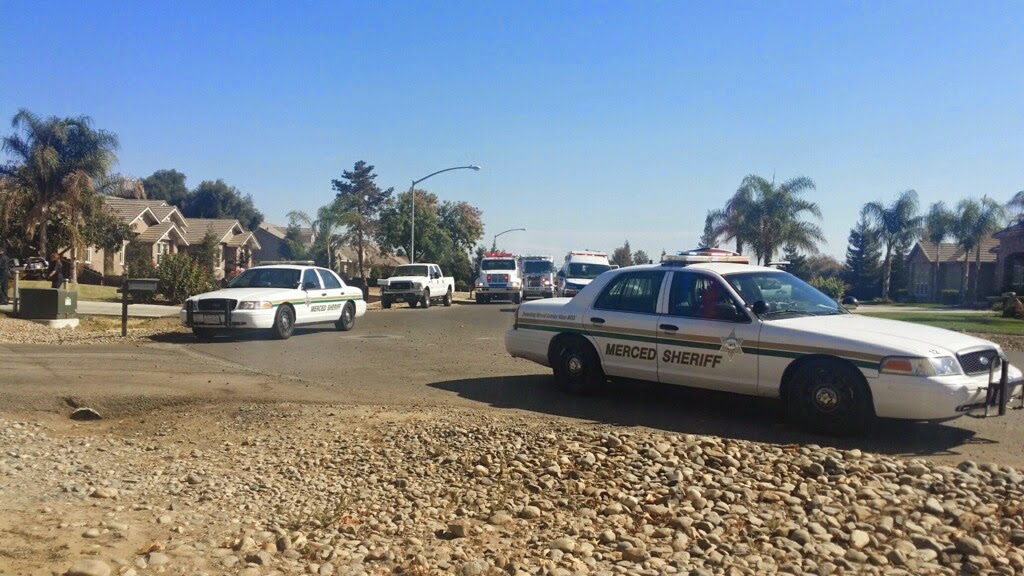 Raquel, my "other" neighbor, heard three gunshots and looked out the window to see a large black man walking down the driveway very casually, carrying a duffel bag.  She called Nick, who went to check out his garage since he's always leaving the door open.  He found a man laying face down in his driveway.  When the Deputy's arrived, they turned the guy over ... and NO ONE knew who this was!!  A perfect stranger, dead between our houses!!  The ambulance came, as well as the helicopter, so it turns out he wasn't quite dead, but with two gunshots in the face, they didn't expect him to survive.  HOLY COW!!! 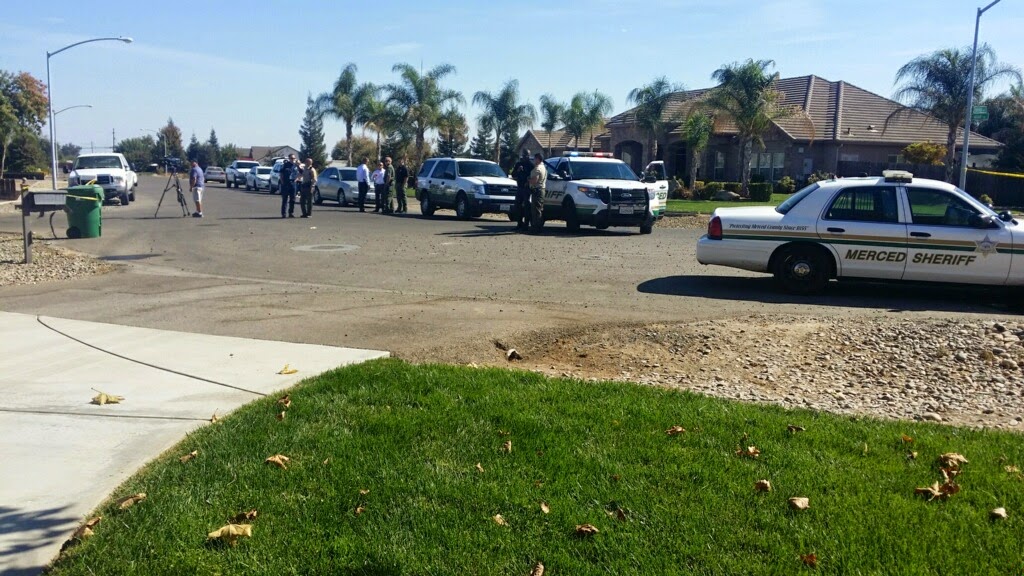 We were all trying to guess what happened as the police barricaded both our driveways and the roads.  It was then they told us they caught the suspect ... the black man I had seen them arrest.  That was fast!!!  Then it became a waiting game.  Neither Nick or his family was allowed near his house, so I got out the lawn chairs from my rig and my neighbors and I took a seat for the rest of the day.  We were all interviewed and no one could figure out what happened.  We were thinking we were all in danger of thieves, gangs, drive-by hits ... who knows what!!

At long last, most of the story came out.  A man by the nickname of "V" had purchased a registered show goat from my neighbor Nick, but since he had no place to keep it, he left it at their house.   He had called that morning asking if he could come feed it, to which Nick said sure.  Nick works nights, sleeps days, and said to just go in the back.  Apparently V was a wannabe cowboy and even belonged to the barrel racing association (no idea whose horse he rode) ... and V had a "romantic relationship" with another gentleman!!  V's boyfriend broke up with him recently so V made child porn accusations and they were going to court over a property settlement.  When the boyfriend (a former church pastor) told V he was going back to his wife and 5 kids, V hid his car around the corner and got him to drive to my neighbor's house (hence the white truck in the driveway) to see the goat.  We don't know if there was an argument or if it was premeditated, but V shot the man three times, then just walked around the corner back to his car. 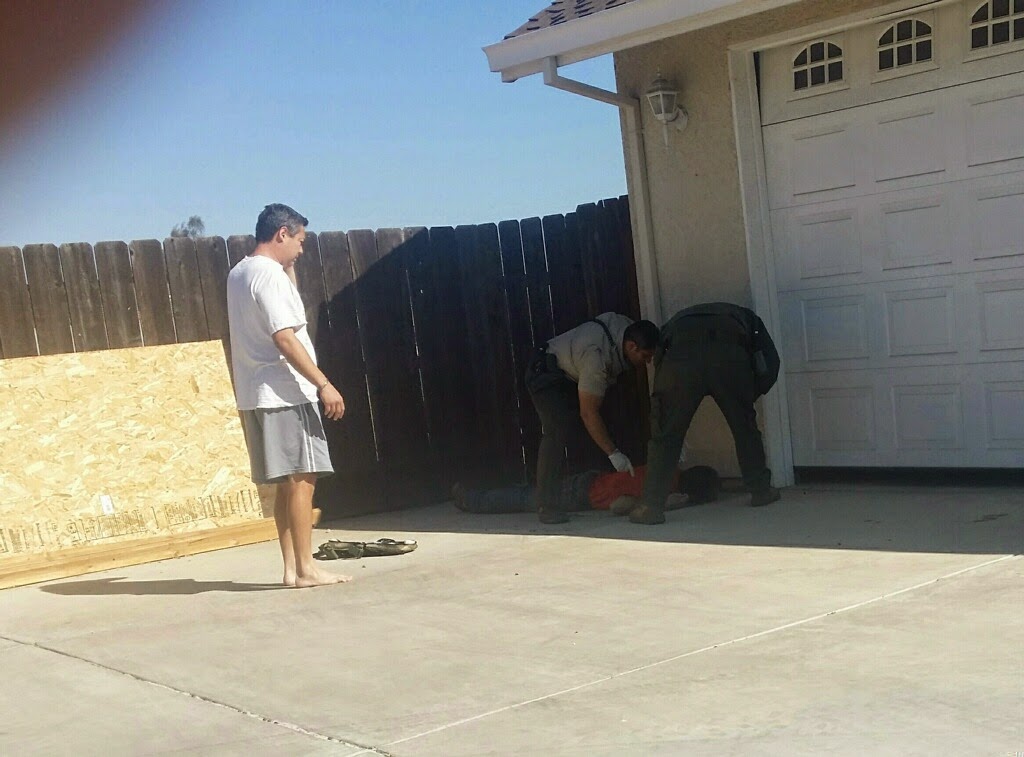 As we sat in the driveway, the Sheriff brought V (in handcuffs) back to the residence.  Not knowing, Nick yelled and asked why he was with the Sheriff (which was pretty obvious to the rest of us).  Nick insisted V couldn't have had anything to do with this since he was such a "sweet" guy, but as they walked him to the scene of the crime, V started sobbing and outright bawling.  As he was taken away, he yelled to us to tell Kim (Nicks wife) that "I'm sorry this had to happen here" as he was driven off to jail.  I guess love can make you do stupid things.  Again I say ... HOLY COW!!!  Here's two perfect strangers to our neighborhood, one trying to murder the other just 30 feet outside my bedroom window.  What are the odds of that?? 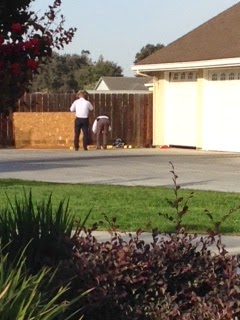 At this point we still don't know if the guy is going to survive.  He was shot with a .380 ... bigger than a .22 and smaller than a 9mm.   After waiting until almost 5:00 pm for a search warrant (in order for the evidence to be legal) the detectives finally began to take pictures and collect the shell casings.  In the meantime, two television stations set up shop on the street, including big vans and tall antennas!!  They wanted to interview us, but we all declined ... except Nick ... who did his interview as the cameras rolled, immediately in front of MY house!!!  Hey ... point that thing NEXT DOOR!!!  At 6:00 I watched my beautiful house on TV!!

As the detectives finally rolled up all the crime scene tape and started to drive off, we waved them down and asked when the family could return to their home.  Oh ... anytime ... now is okay.  Really???  What about the blood, Nick asks.  Oh that's your problem!!  You can clean it up!!  Yikes!! So we all offered bottles of bleach ... the problem is all that blood and bleach is now entrenched in my lawn, since that's the way the water flows!!  I'm sure I'll have lots of dead grass as a result.  What a crazy story ... I'll let you know if the guy survives.  The good news is that all of us neighbors are now VERY well acquainted.  Up to this point, they hardly even waved at me ... let alone SPOKE!!!  And I guarantee we'll all be watching each other's houses from now on!!  Hey ... this might make a good murder mystery book!!!