Flying High In The Sky .. A Two Part Story!!

Not many people get a chance to fly like a bird on the breezes over Albuquerque, but during the Balloon Fiesta, many people are thrilled to check that item off their bucket list.  I never had any intention of flying and it's not even on my bucket list.  It's hard enough to get me in a jet to Hawaii, but at the last minute when there was space offered to me, I jumped in the basket!!  Yup ... I flew in the Golden High balloon with Richard Ret and Jenny.  Having seen how Richard pilots his balloon compared to some others, who shall remain nameless, I knew I was in good hands!! 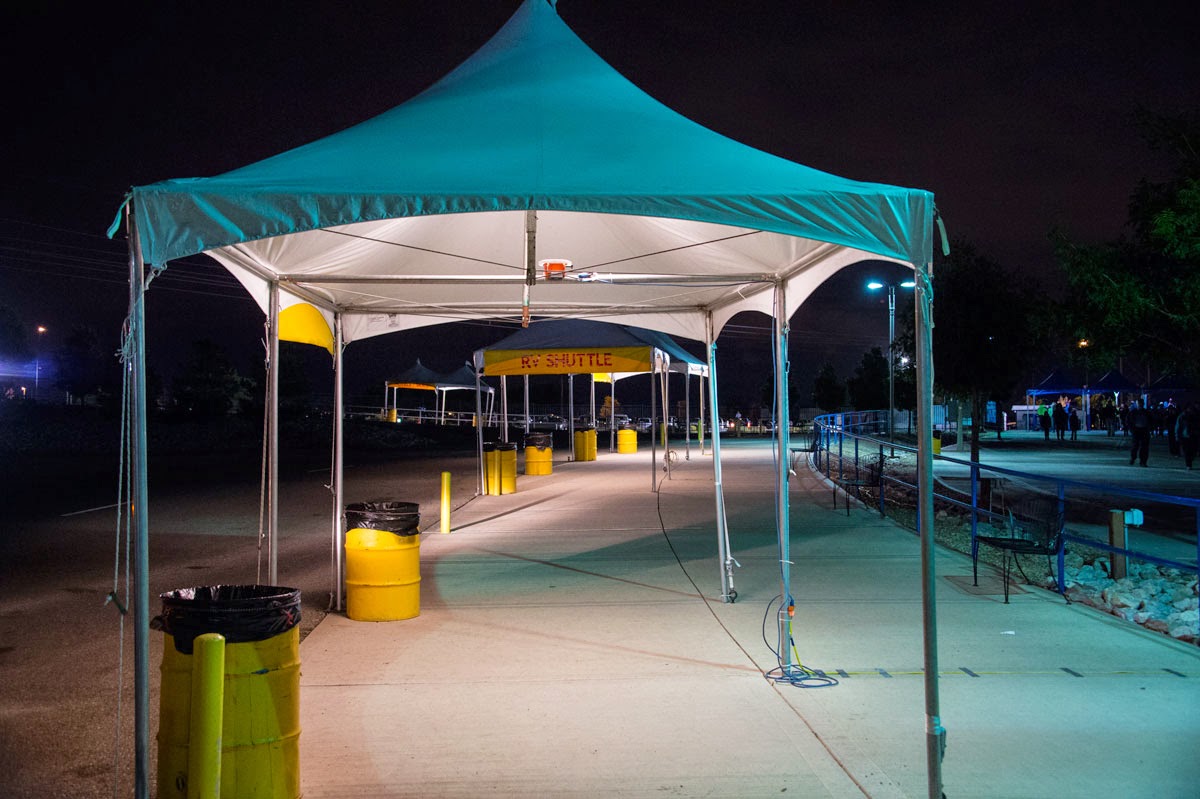 With Crew Passes for the week, we walked by the ticket booths and the people clamoring to pay.  Thanks to Judy Rinehimer, we all received the passes when we qualified for crew duty. 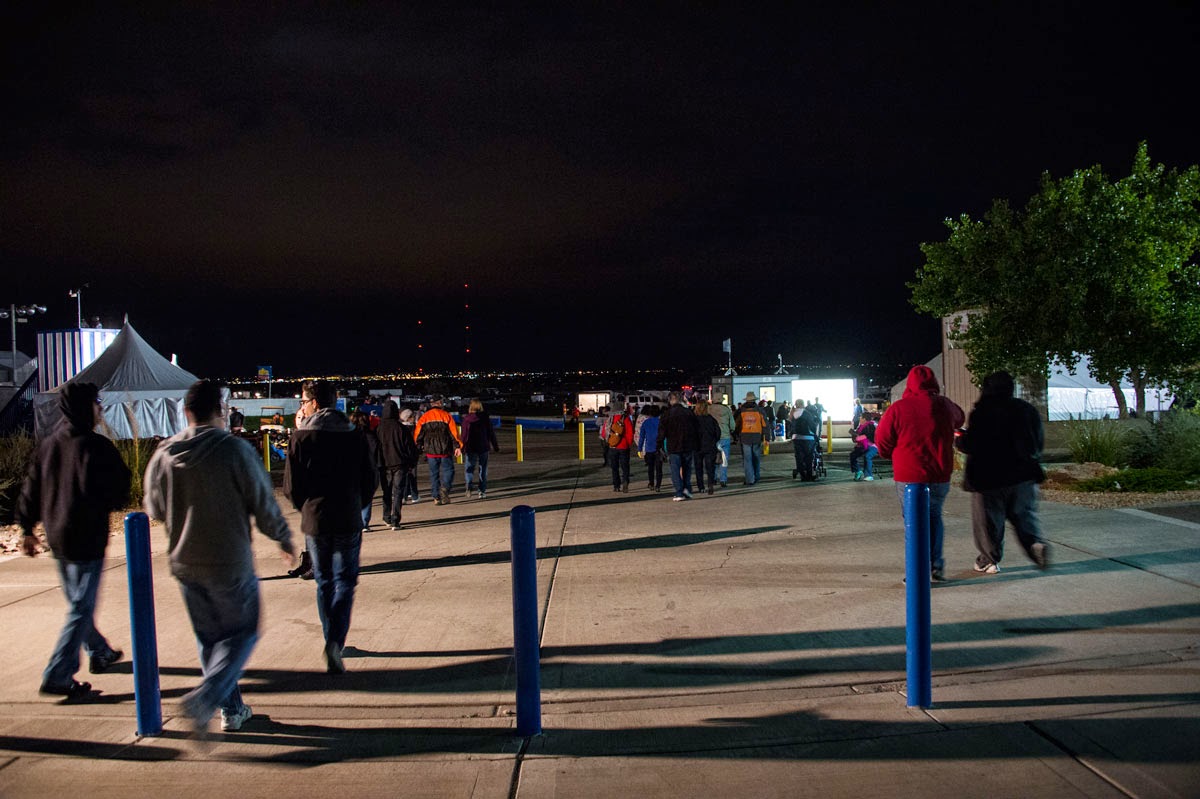 It's pretty dark on the field, where most of the rigs are parked in front of the "cafeteria".  Pilots are here by 4:00 am to exchange war stories and fill up on coffee. 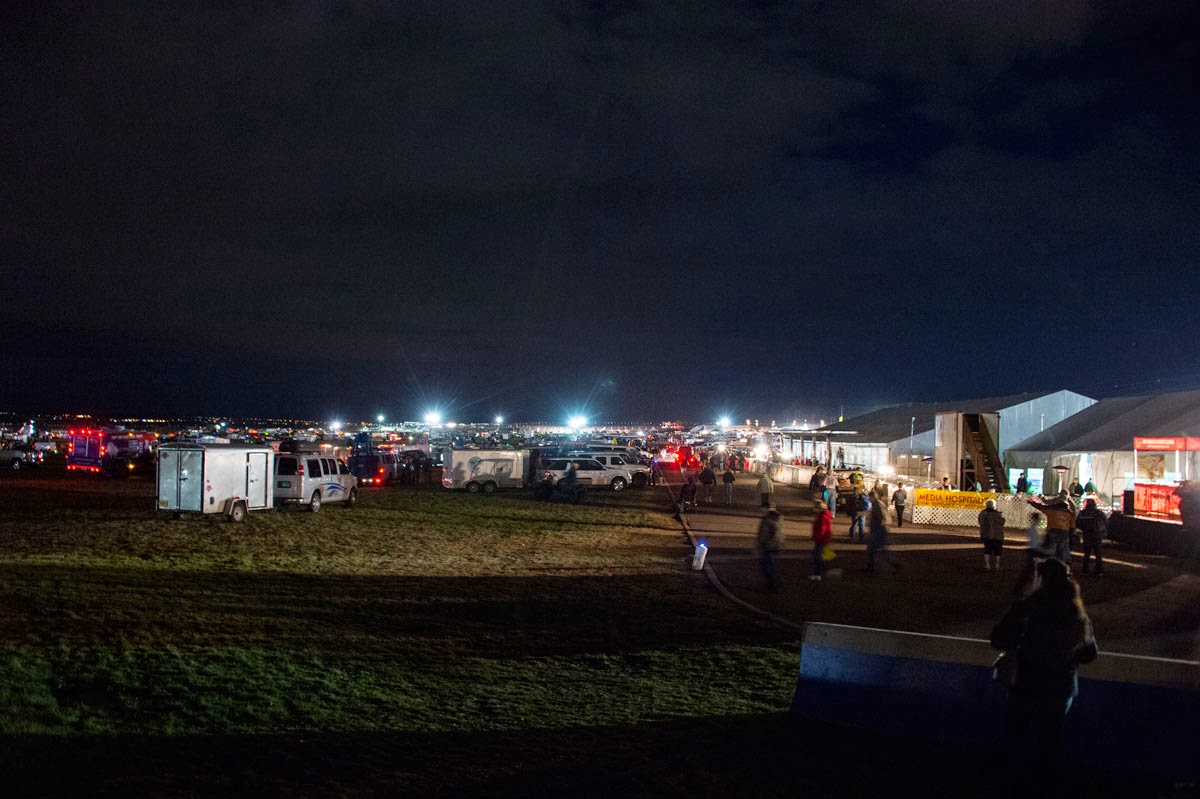 This huge tent supplies food for the pilots and crew chiefs, along with anyone else who has a pass.  I received a pin from my first pilot that allowed me entry, but honestly, the food wasn't all that great until the last day ... when I had given the pin back!! 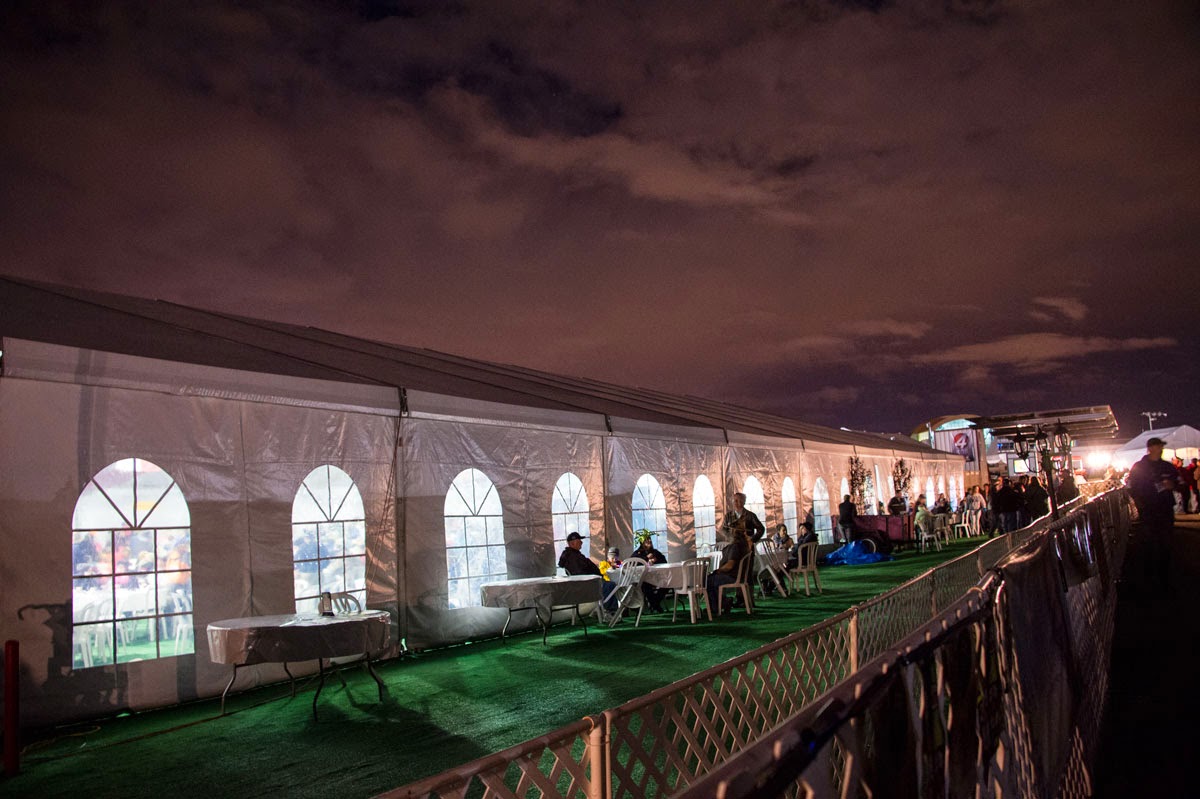 At 6:15 every morning there is a pilots briefing held at this tower.  They talk about the good and the bad, then give the latest weather reports at different altitudes so the pilots and crew know which way they will be going.  On competition days, we drive out to a spot picked by the pilot and crew chief, hopefully where the winds will take them back to the field. 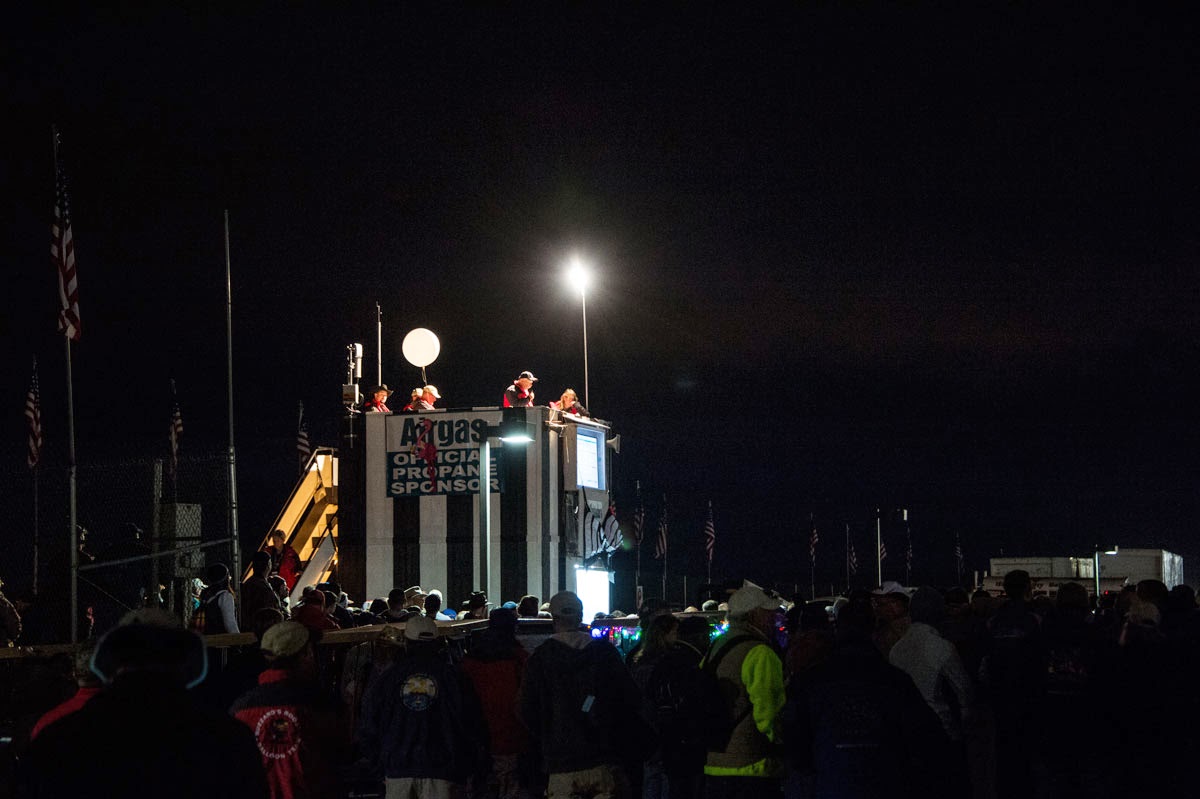 Some time during that briefing, the dawn patrol takes off, offering another view of the winds for launching and some beautiful photographic opportunities. 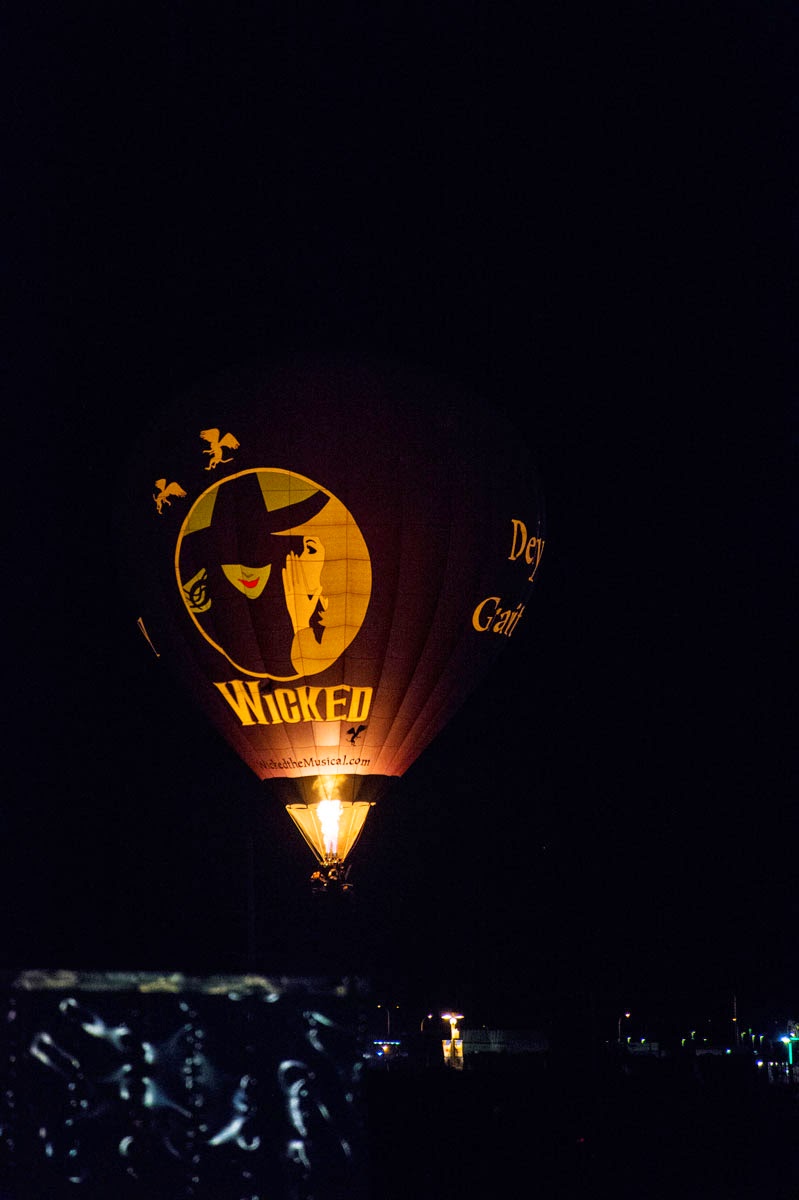 It's amazing to see them launch in the dark.  The only time you can see them is when they hit the burner to add hot air.  They also carry a small light at the bottom so they can be seen by others.  As soon as the sun comes up, they can see to land. 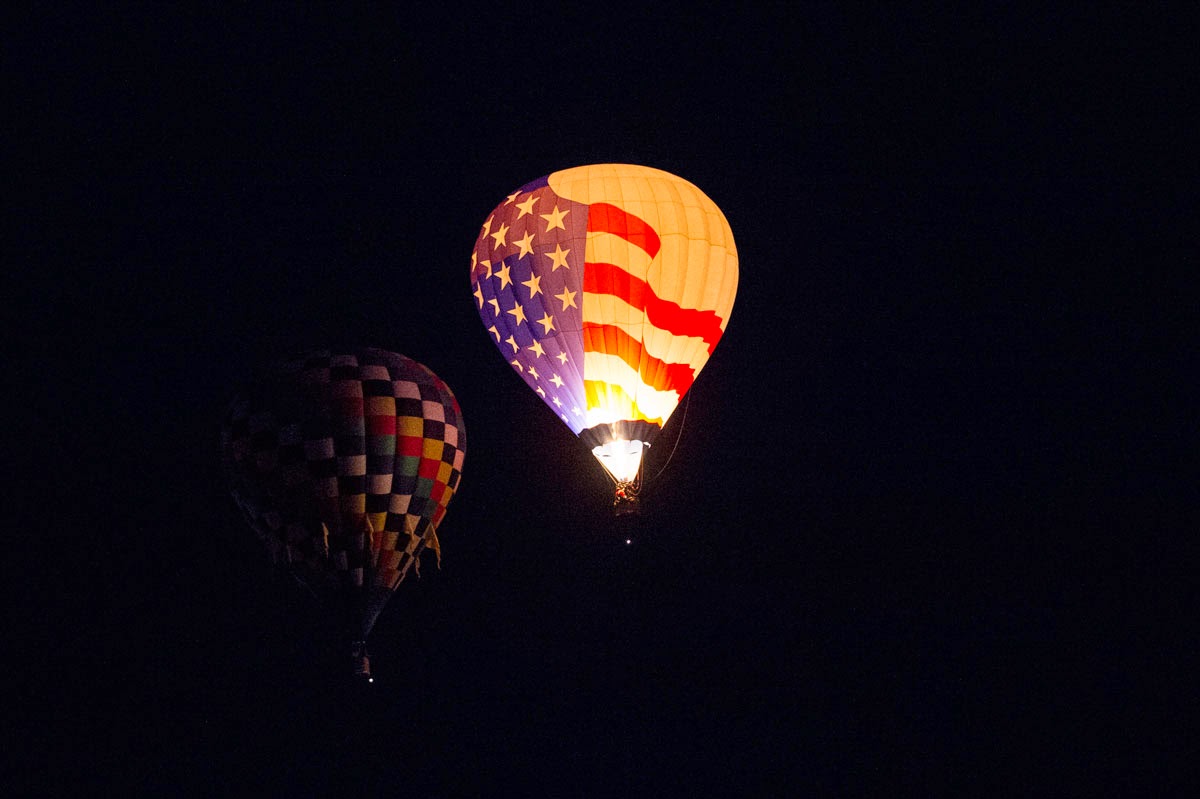 Our launch point was in Corrales, a small town to the Northwest.  By the time we got set up, there were eleven balloons in a space big enough for three!!  It was pretty crazy, to say the least.  Four ladies came with us, including Richard's last crew chief.  So many, that Barbara and Tom graciously volunteered to stay at the field for the day.  When I tried to get out, they said most of the ladies had no experience with crewing and there was room for us to squish in ... which we did.  Jim ended up with less than one cheek seating however!! 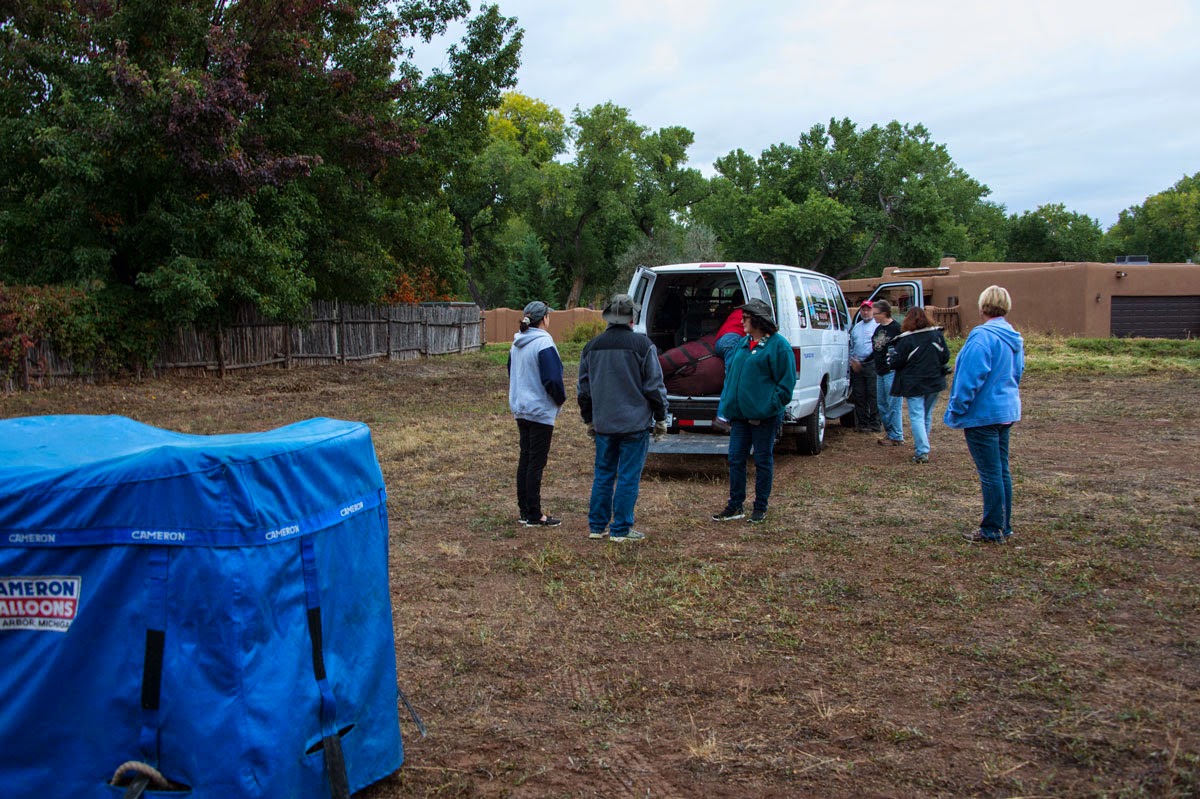 As usual, the envelope was filled with cool air by the fan.  About the time the basket finally rose upright, they told me to get a hat.  Get a hat for what???  I'm not cold ... I don't need one!!  If you fly, you wear a hat!! 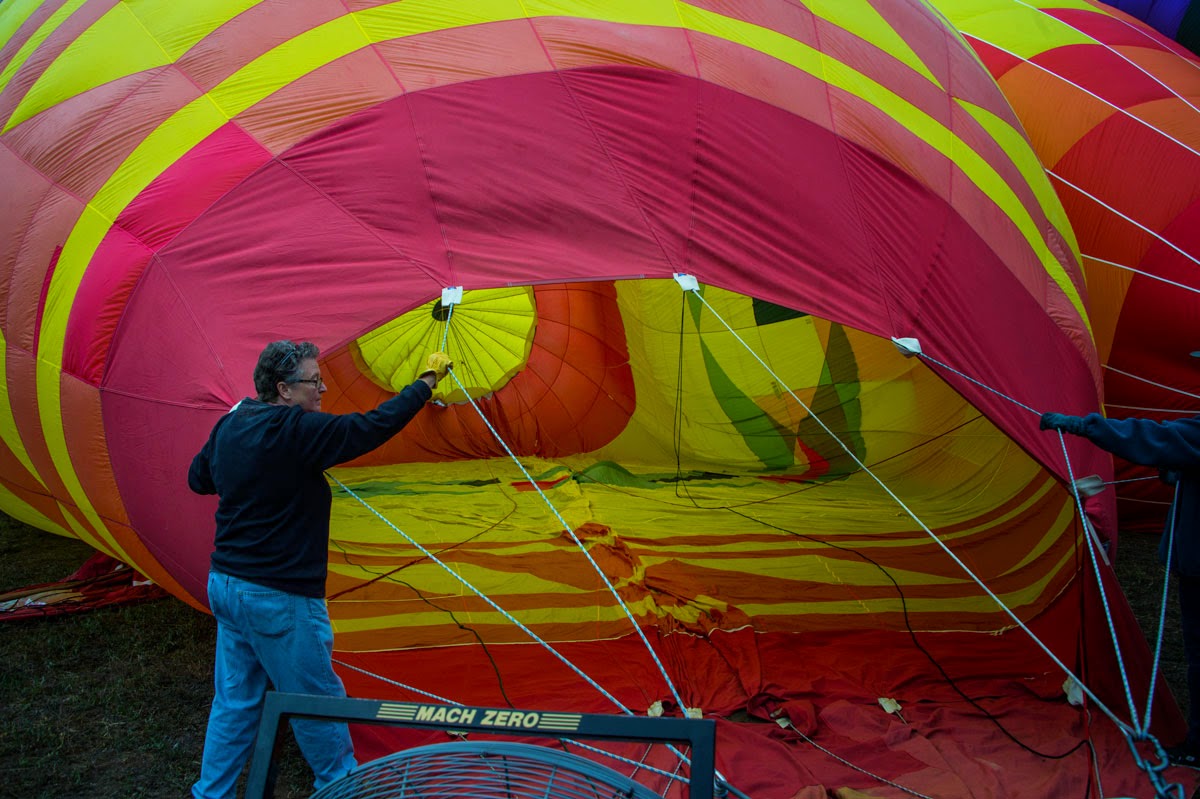 By now, Jenny in pink was in the balloon and Richard was telling me to get in ... and as crew, you do what you are told!!  Becky found an extra hat for me and in two seconds, we were waiting for takeoff.  I look pretty calm and cool in the basket, right??  But all I'm thinking about is I don't have the strap for my camera ... what if I drop it?? 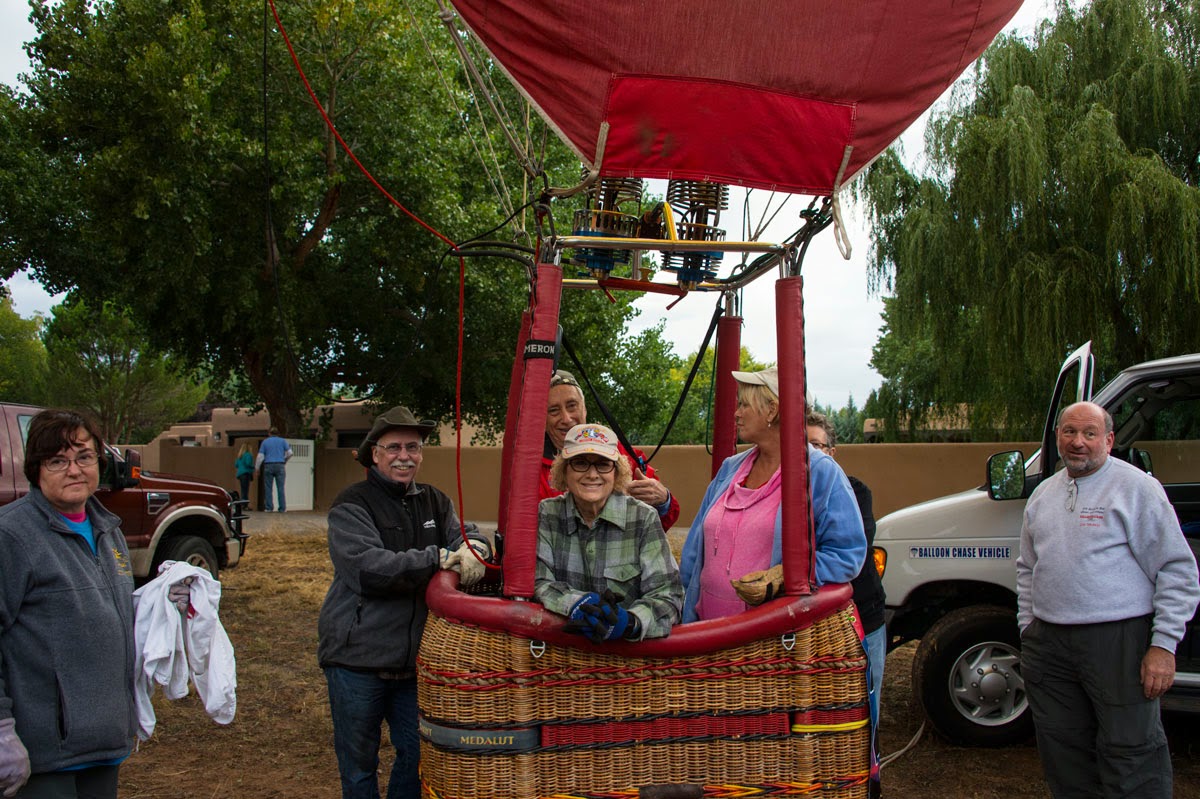 As balloons inflated all around us, we kept weight on (easy for me since I was IN the basket) until the two in front of us took off. 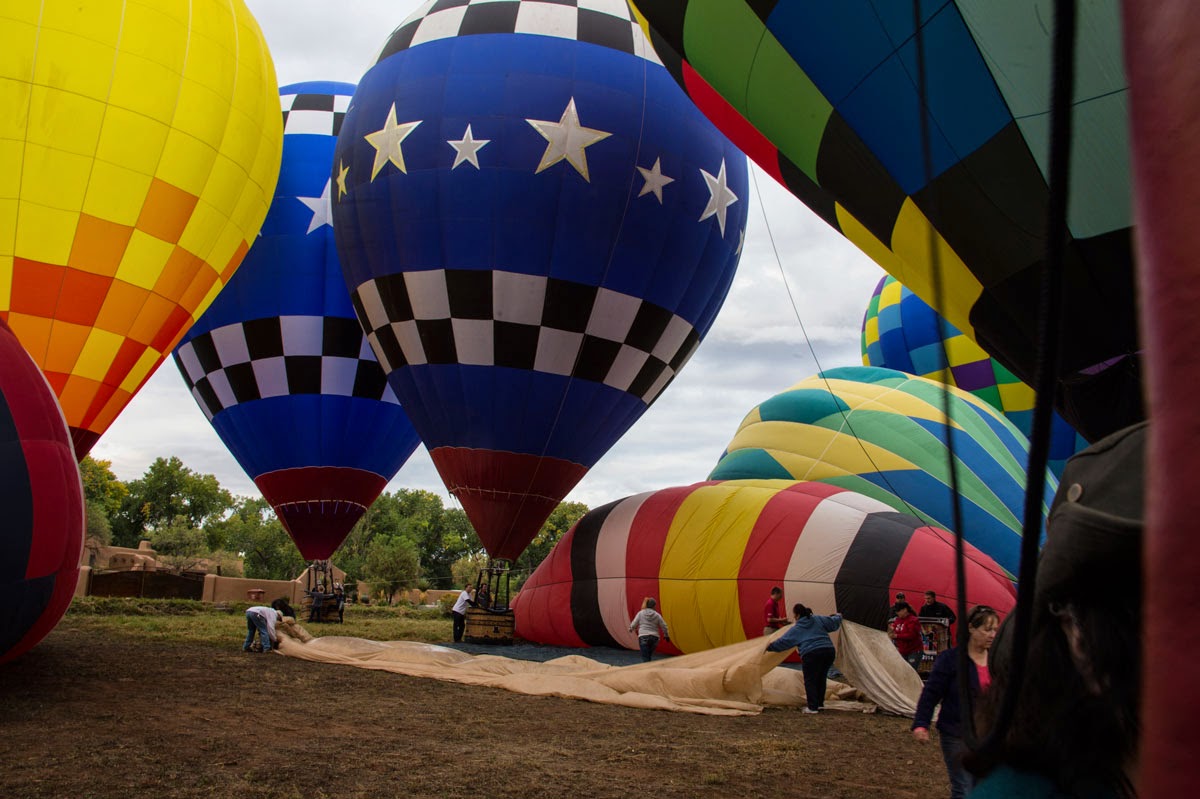 Richard hit the burners a few times and we started to rise up.  Yikes!!!  My heart is beating a mile a minute!!  I'm thinking .... well it's got to be easier in the basket than hanging off a cliff rock climbing! 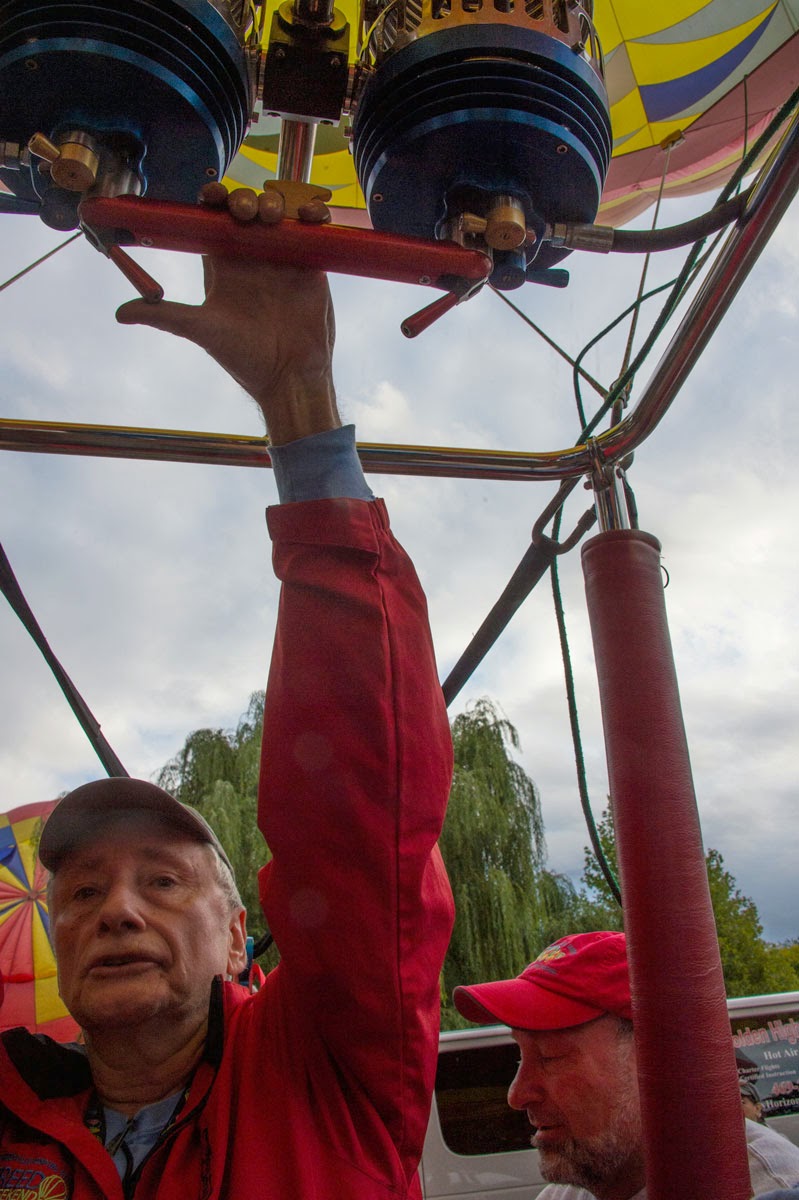 I made myself as small as possible to fit in the corner of the balloon as Richard said Hands Off .... 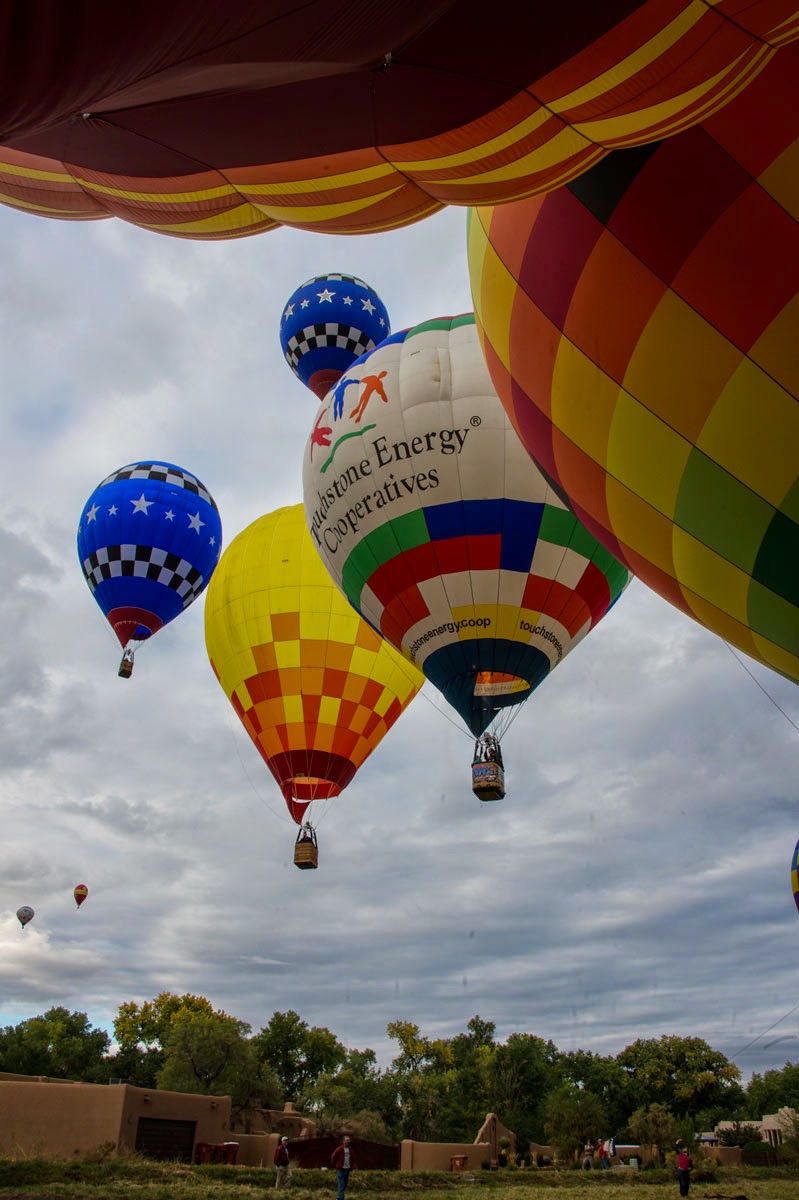 And we started to lift off.  This picture was taken by Gail.  When Barbara saw it, she said I looked VERY excited!!  Actually that's apprehension with a touch of fear and I can't believe I'm doing this!!! 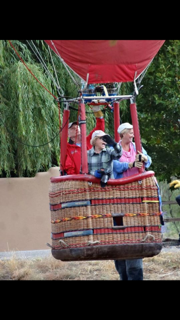 But once we were off, we moved so slowly, you could hardly tell we were moving.  It's really not all that quiet, since Richard and everyone else close by is hitting their burners ... 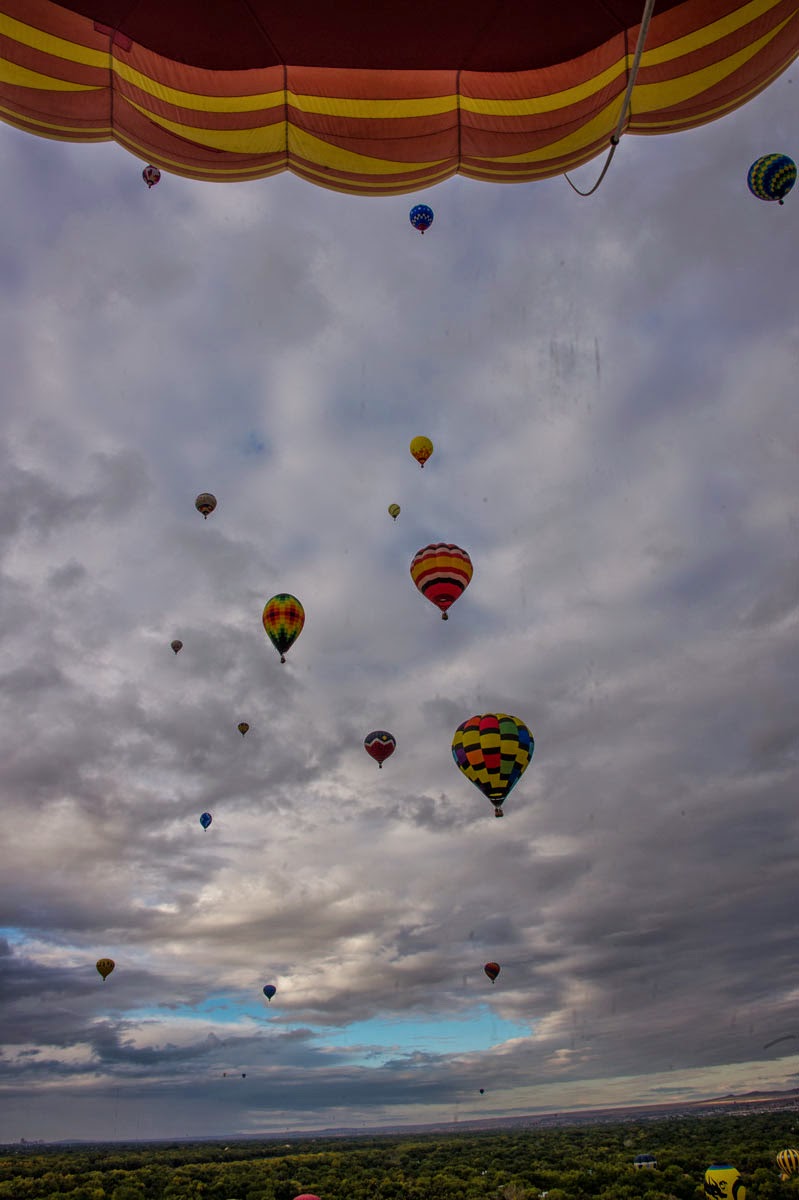 Plus all the noise Jenny and I were making, oohing and aahing every minute!!  It was spectacular ... amazing ... fabulous ... scary ... and wonderful all at the same time!! 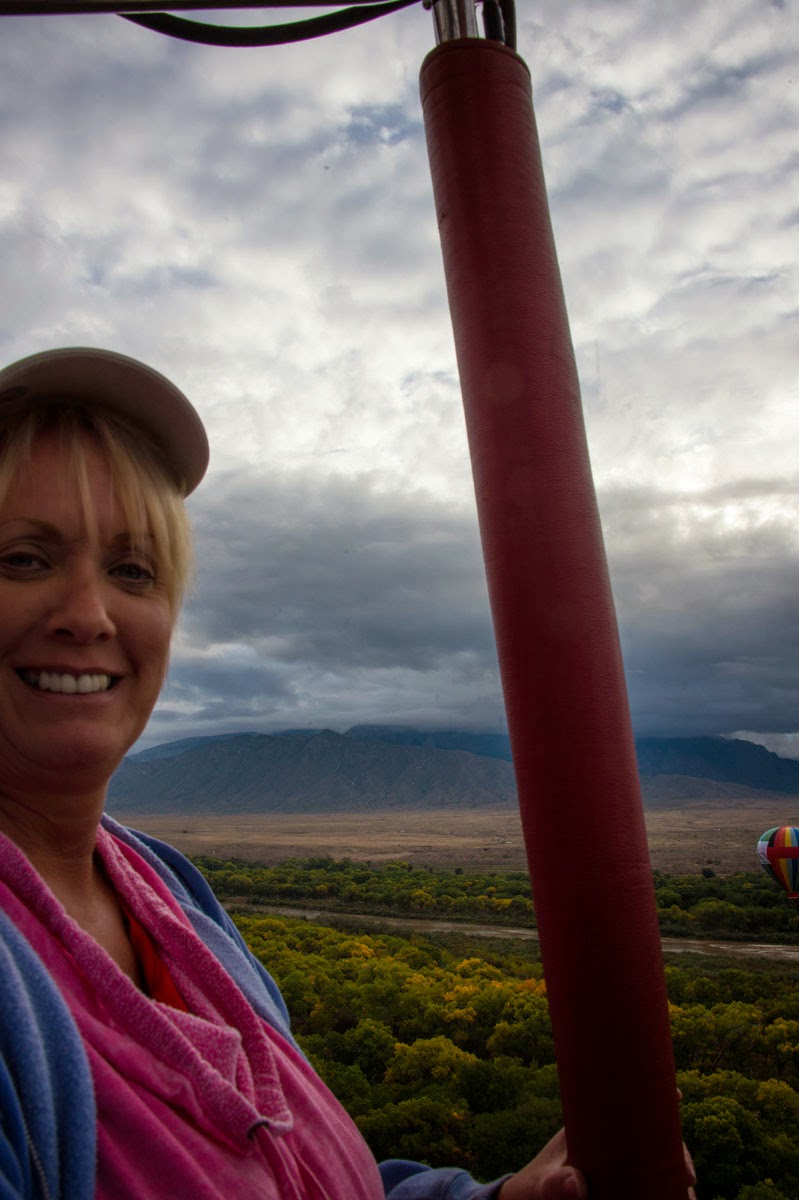 The clouds and trees turning colors were just gorgeous against the blue and black mountains!! 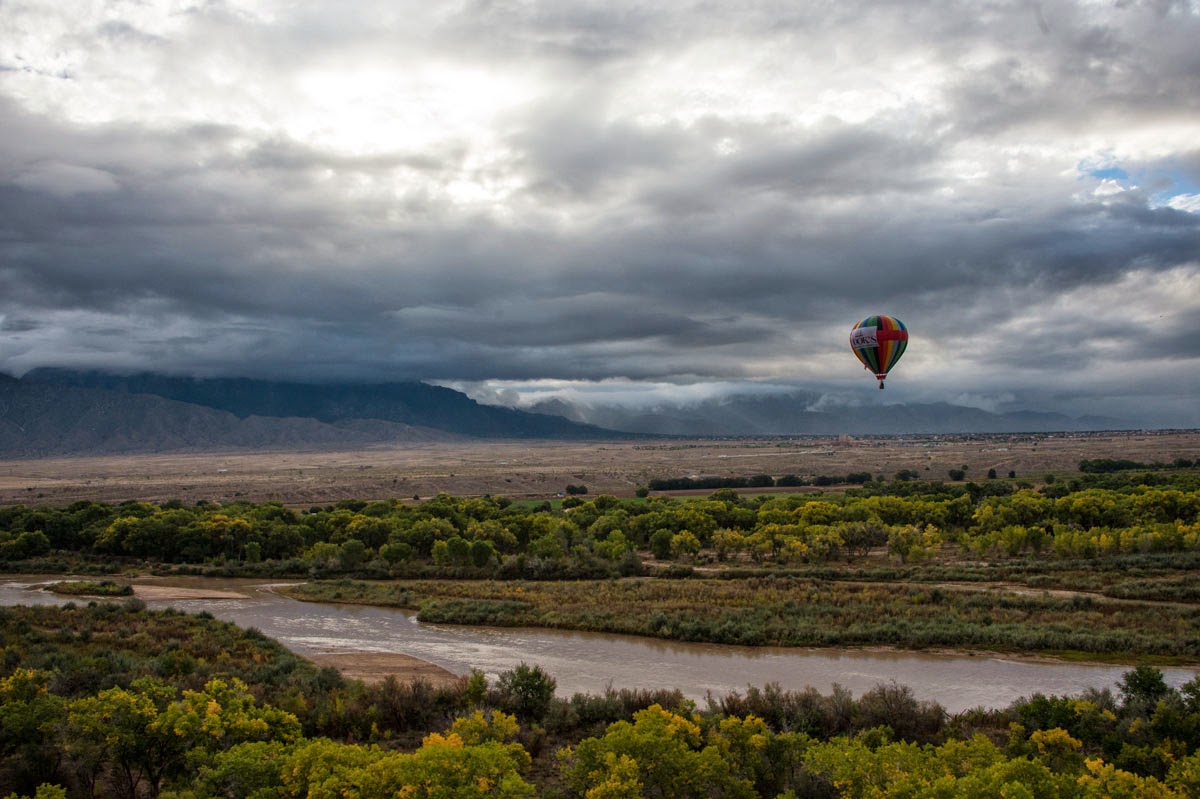 That's the Rio Grande River below and you can see our direction change in this image compared to the one above, as we came in lower to pick up different winds.  Even though this is a competition day, Richard had a surprise for us. 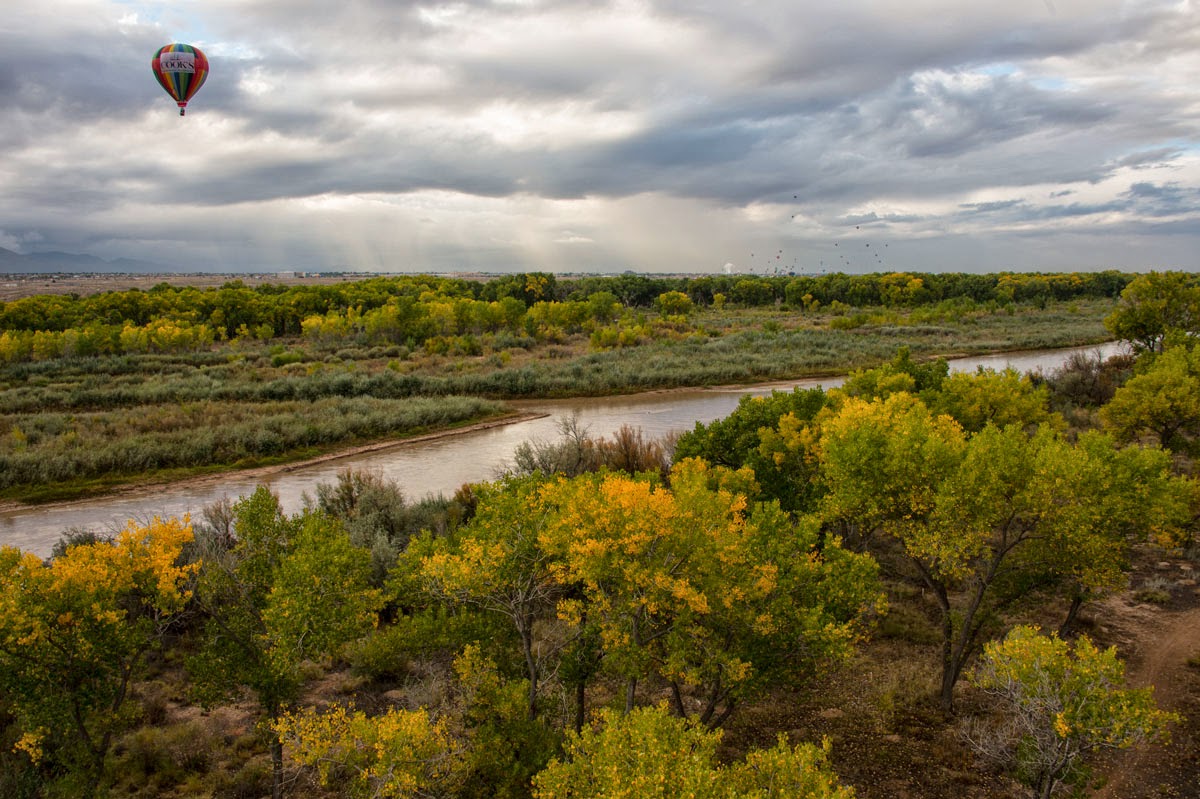 I have no idea how high we are here, but this is looking straight down.  As we came in lower, we brushed the top of a tree.  Richard said to grab a leaf ... but NOT a branch!! 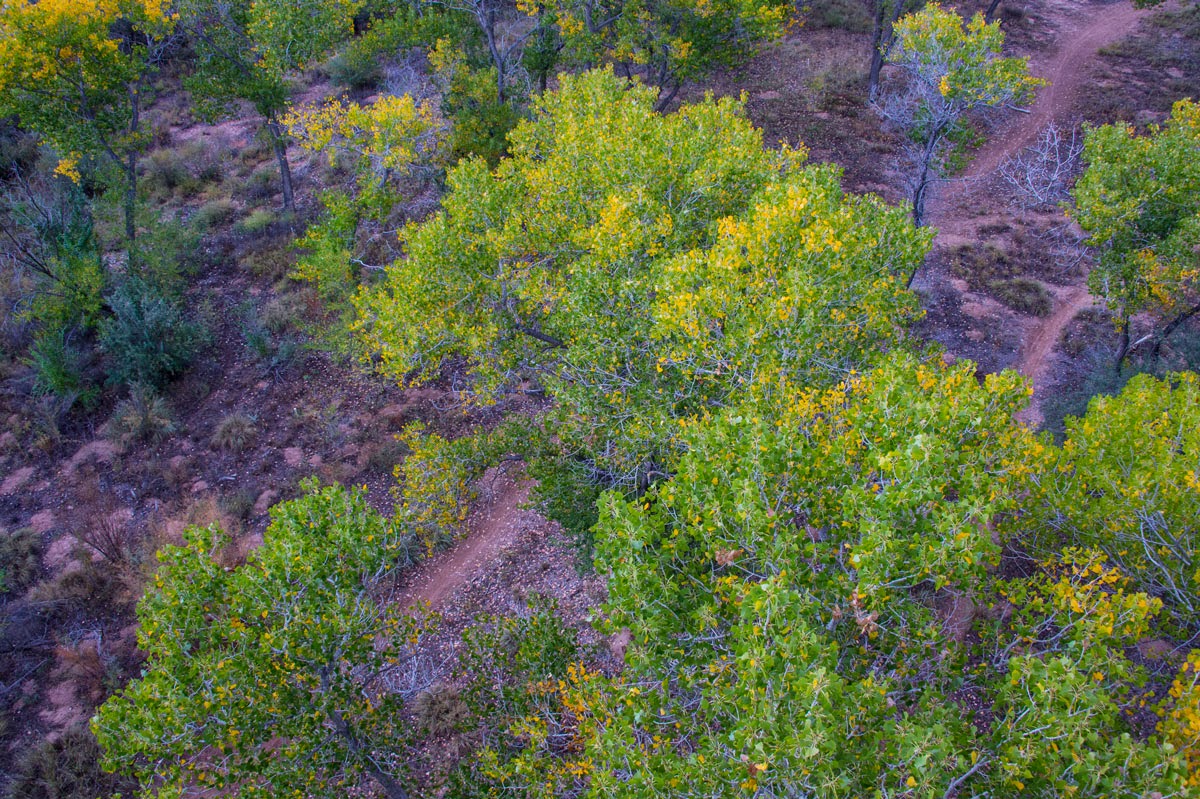 As we came gently down into the river bed, many other balloons had the same idea.  I knew what was in store, but Jenny had no idea!! 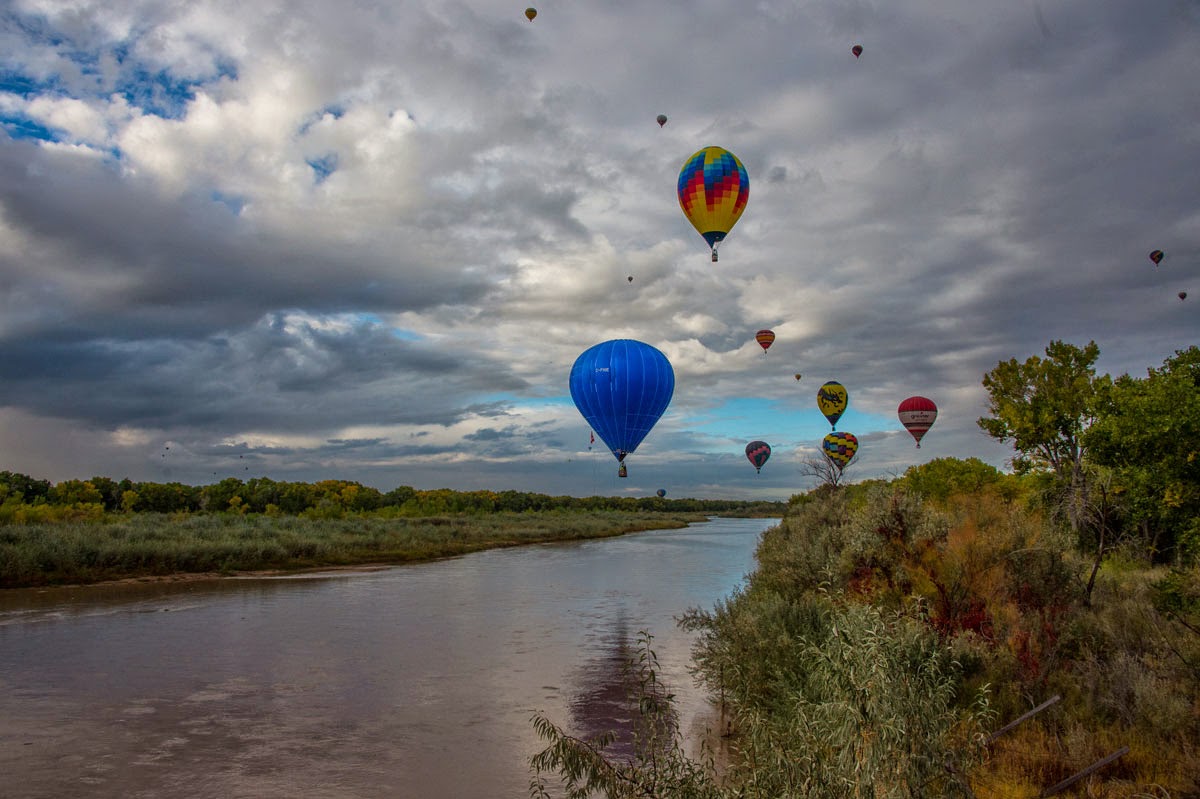 Richard's surprise was a Splash 'N Dash ... drop the basket in the river, then pull up again.  This really isn't an easy task.  Apparently there is a 40 second delay between Richard hitting the burner and the balloon reacting to the increase in hot air.  We're in the water here ... you can see the toe of my white tennis show sticking out the foot hole in the basket.  I was standing up just enough to keep both feet dry!!  Poor Jenny got her feet soaked!! 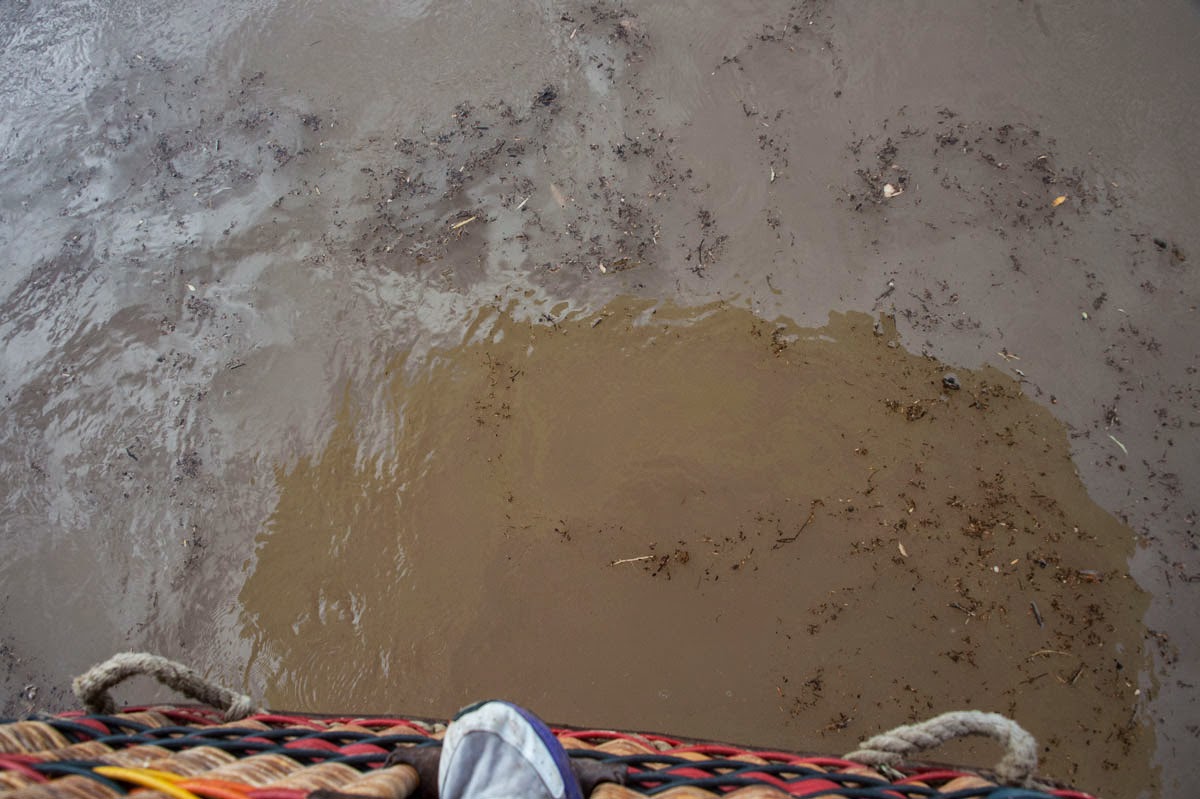 Did we get out of the river??  Did we crash and burn??  Did we win the competition??  Find out in tomorrow's blog where I will have room for the rest of the pictures!!

Posted by Nancy Kissack at 8:30 AM