Every balloon has a name ... and there were hundreds of them in the sky this morning for the second day of competition.  Mystique, That One, AirRageous, In The Buff, Dingbat Sr., Zia Later, Blew By You, Bad Check, The Grateful Red, Dragonfly ... the names just go on and on, but are all important to the pilots and crew.

It was another long morning of crewing for Richard Ret with Golden High, but it's worth every second many times over!!  Even with the early 4:00-4:30 am get-out-of-bed time, I'd do it over and over. 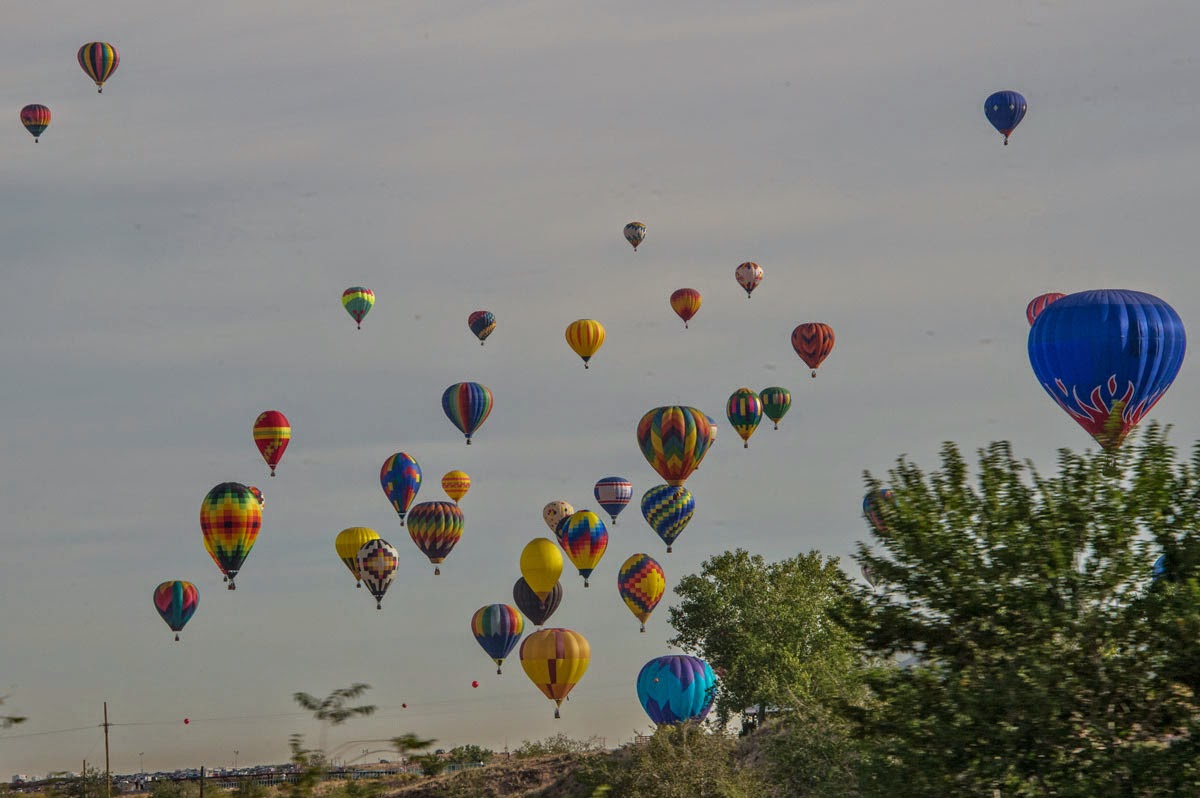 We met on the field just before the pilots briefing.  When that finished, we drove off the field under a beautiful morning sunrise to find a place to launch. 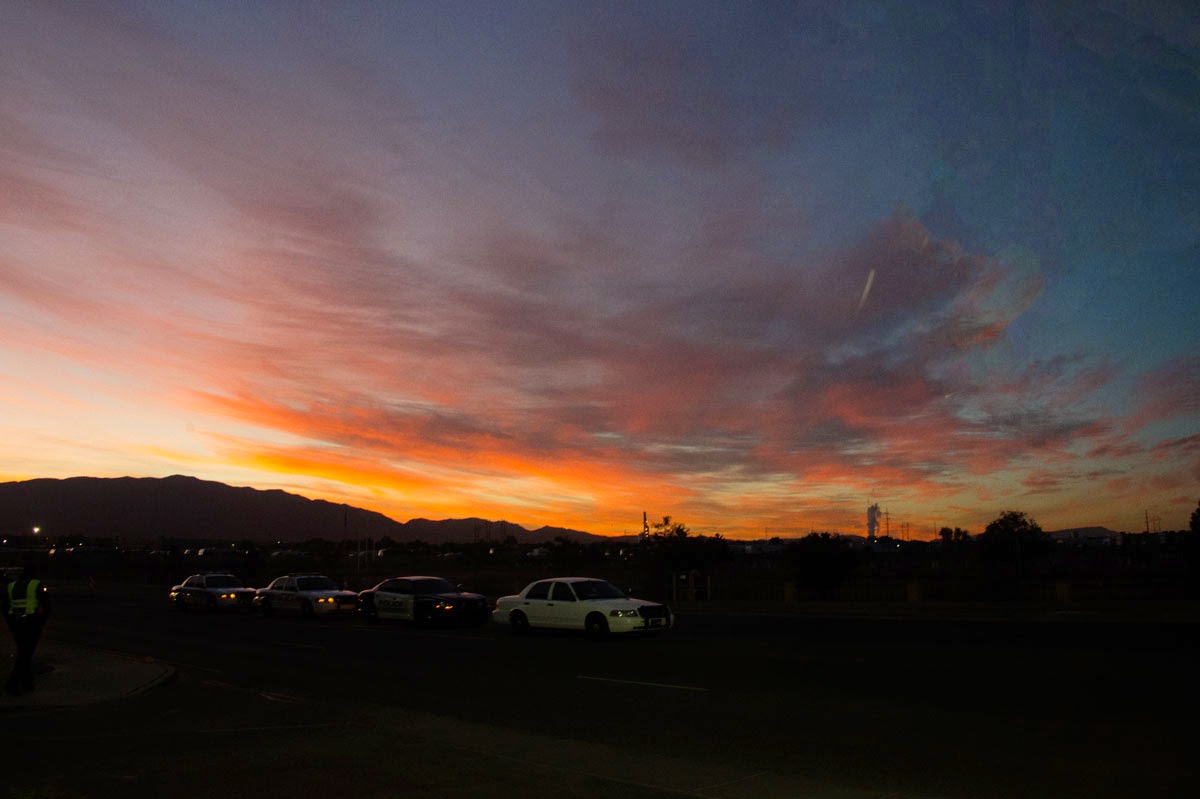 That's not an easy task, as there are red zones that you cannot launch from, as well as private property unless you get permission, and many many power lines.  Once you find an empty lot or park like this one, you lay out the balloon and get to work!! 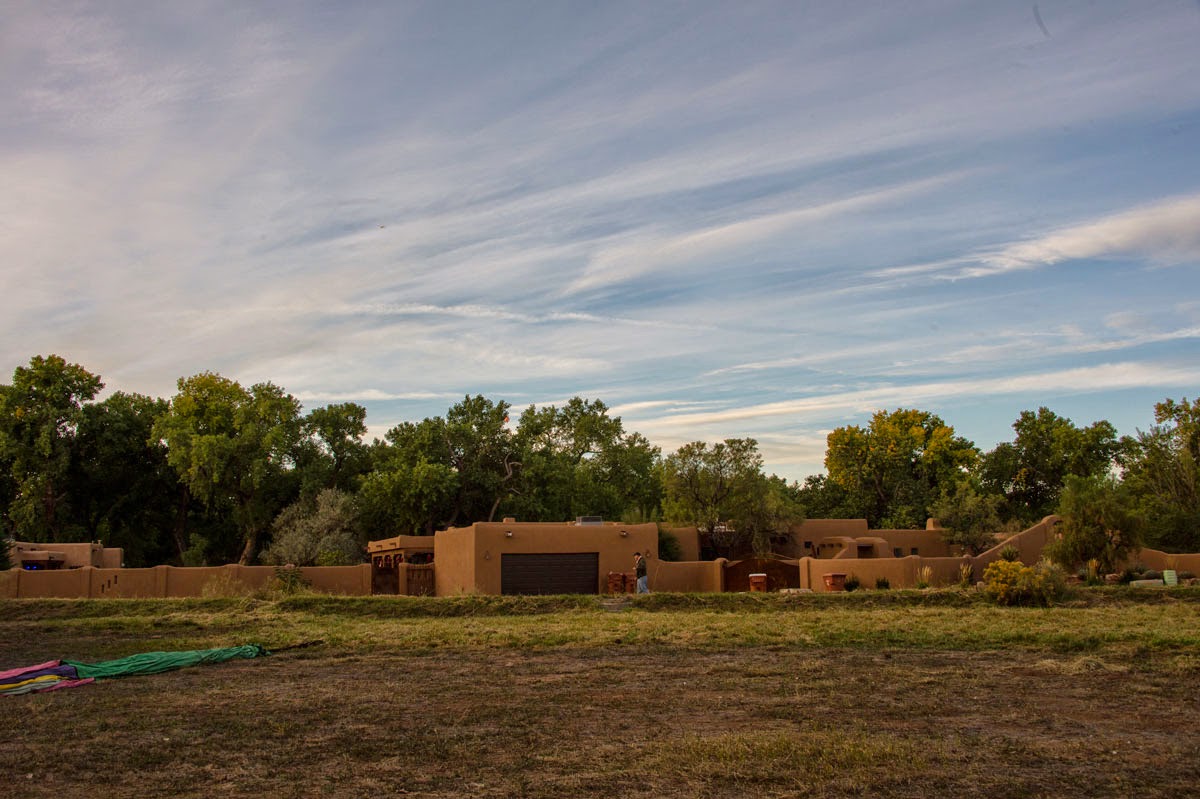 It didn't take long until our empty little field became a parking lot with some inconsiderate pilots parking within feet of our rig and trying to crowd us out.  Not a good idea, because they can be turned in to the Fiesta Headquarters. 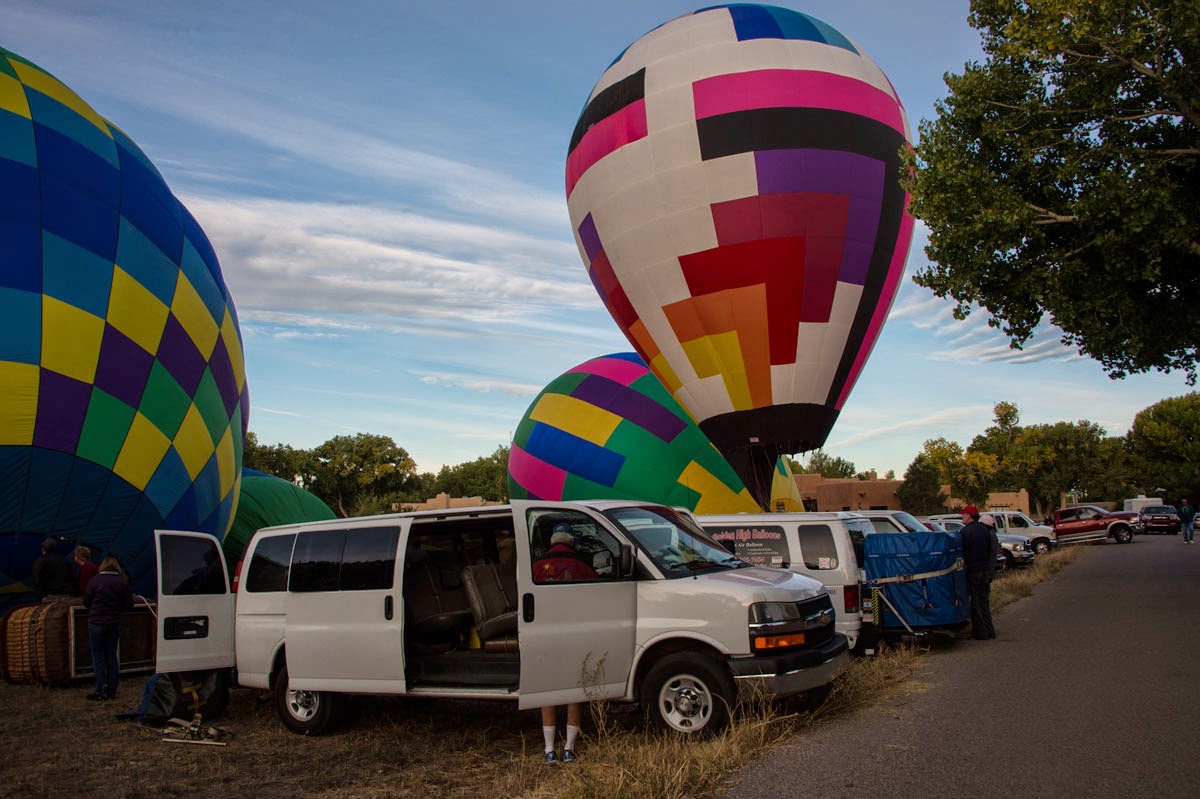 After the balloons close to us took off, we unloaded the basket and began to set things up.  The guy in the red ball cap is the Crew Chief.  We jump when he says to jump!!!  We don't even ask how high!! 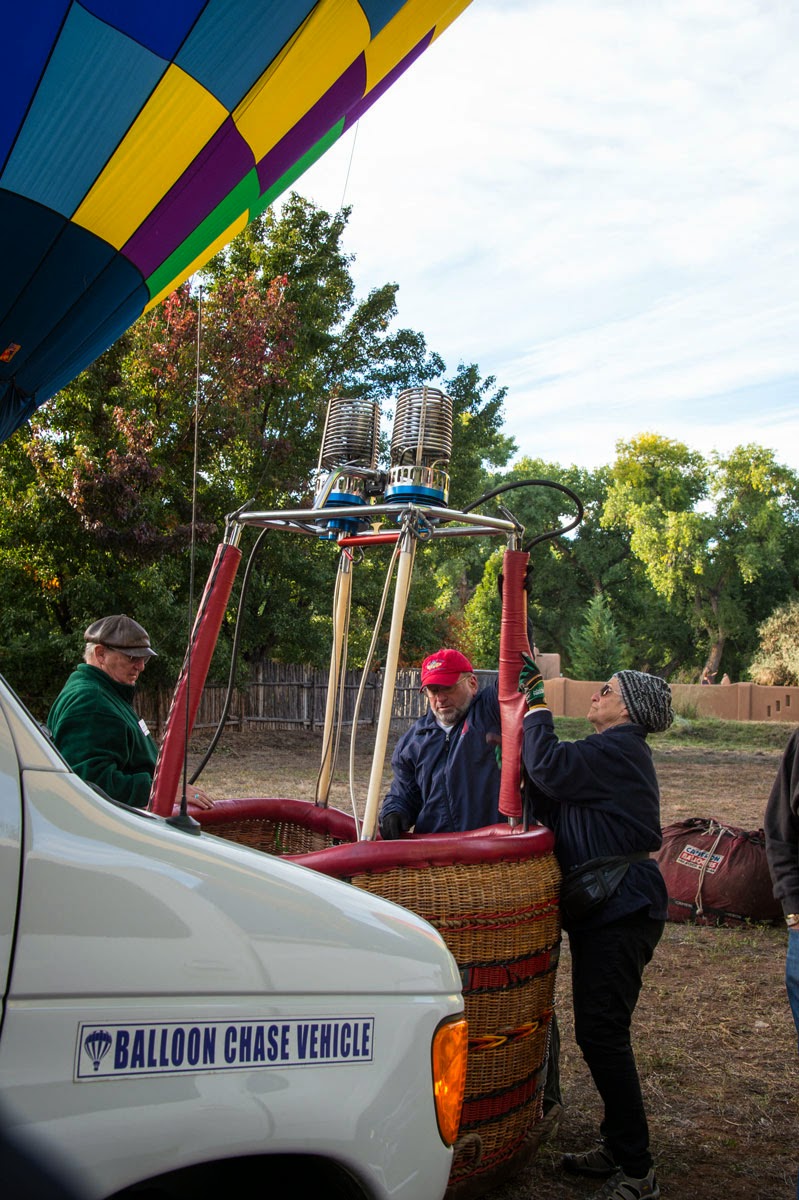 Even though another pilot's crew is trying to crowd us out, we continued with our inflation.  The Balloon should be lined up with the basket, so you can see how far he pushed us over.  No worries, we just kept working!! 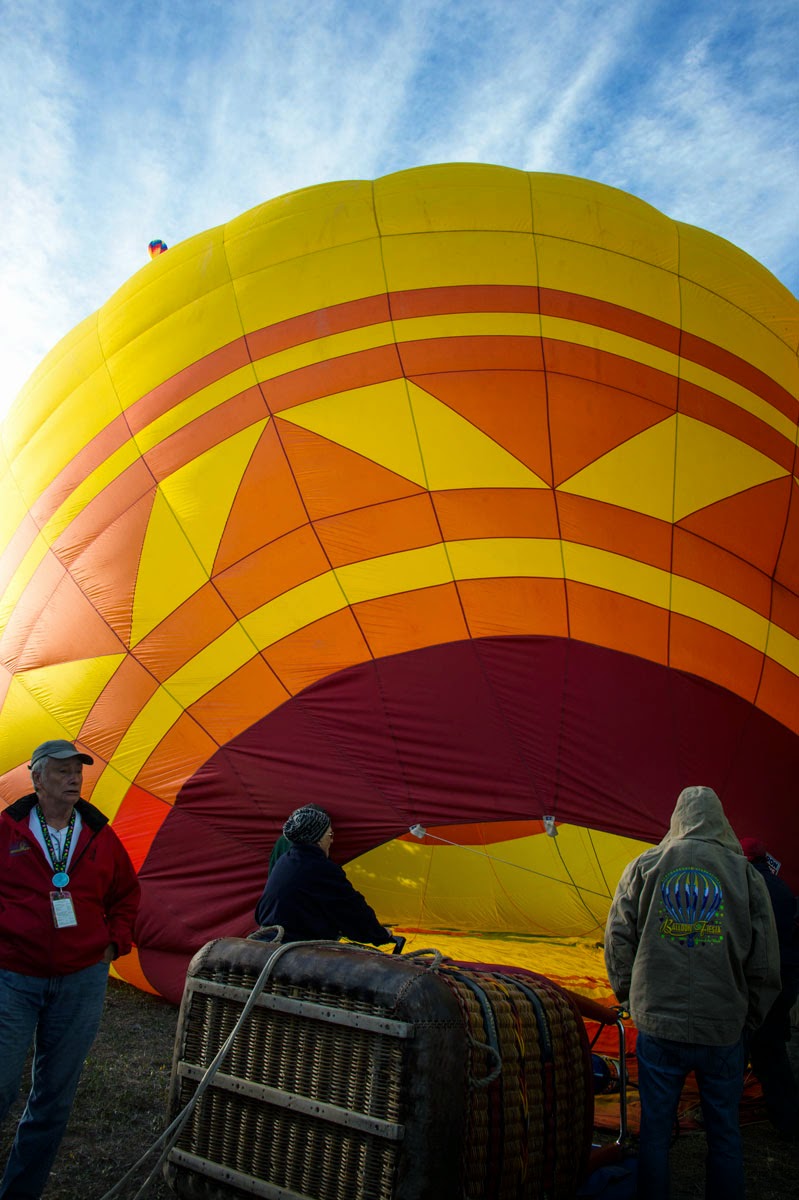 This is a good picture of the crown ... the part that opens when the pilots pull certain lines, allowing hot air out and the basket to descend. 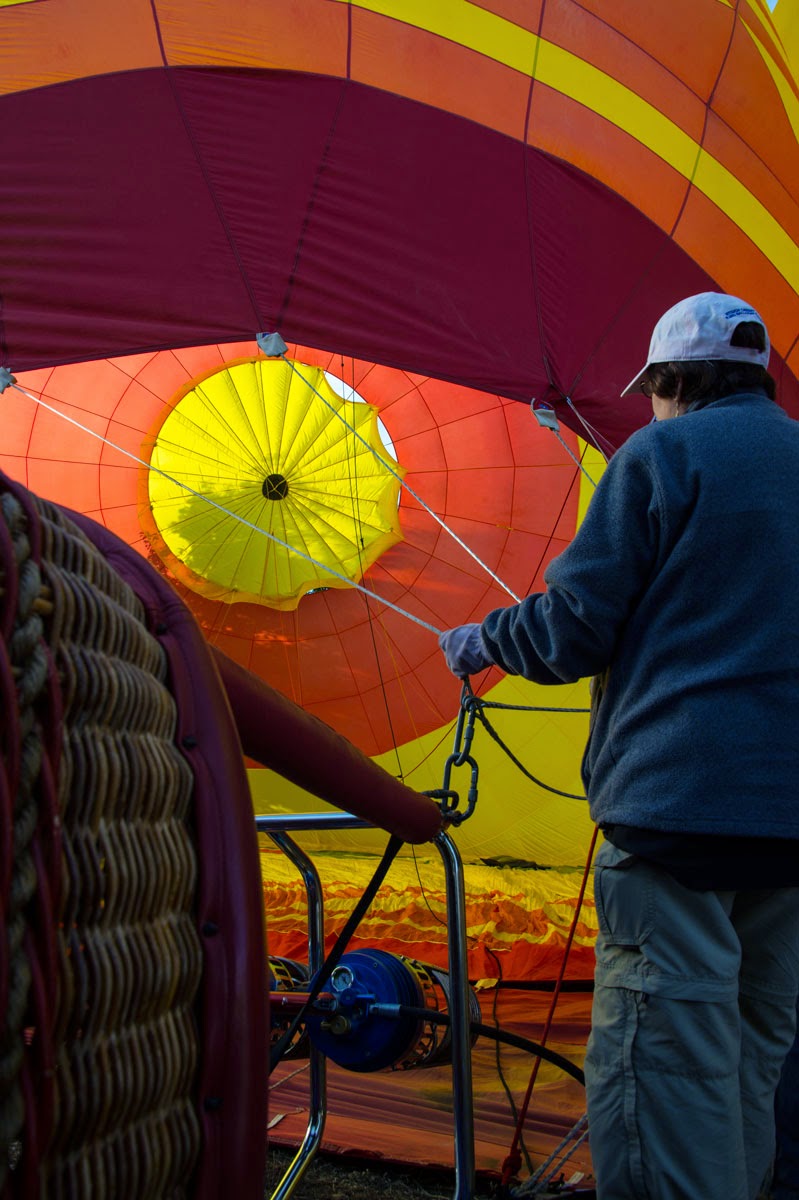 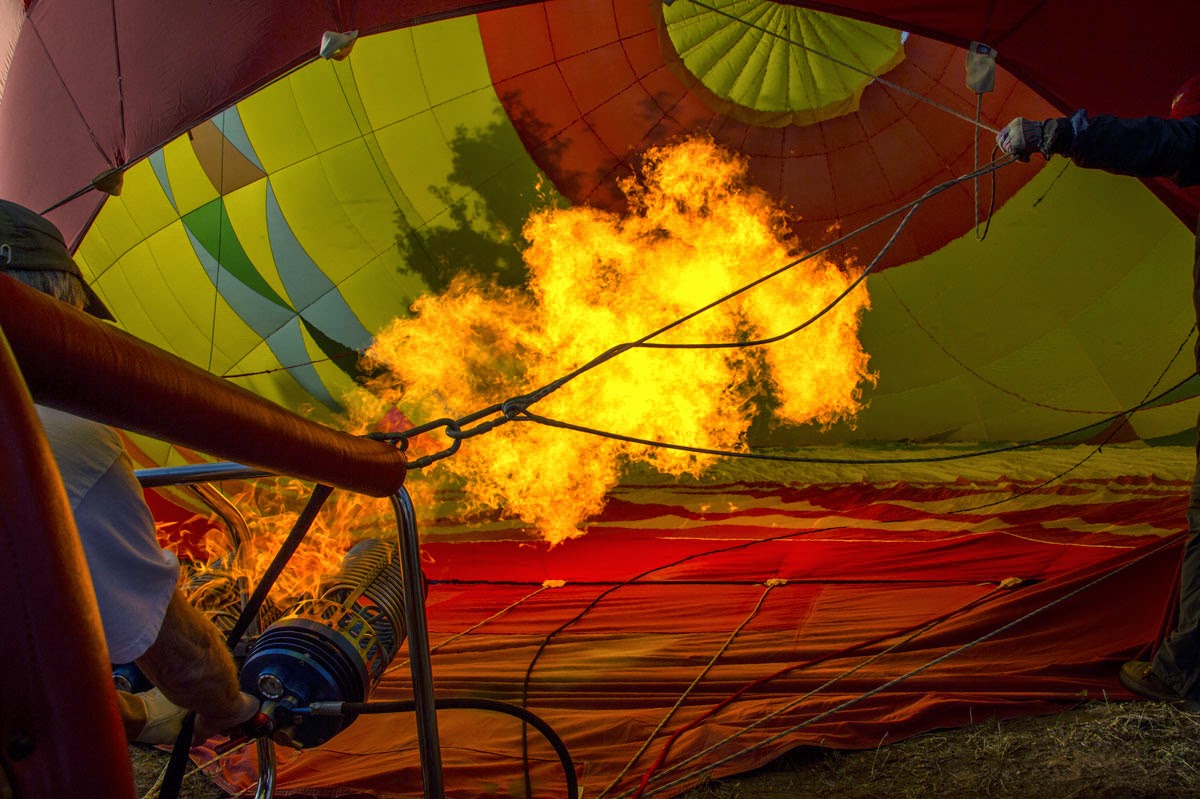 With a last few adjustment to the rigging, Richard and friend Don climbed into the basket to ready for takeoff. 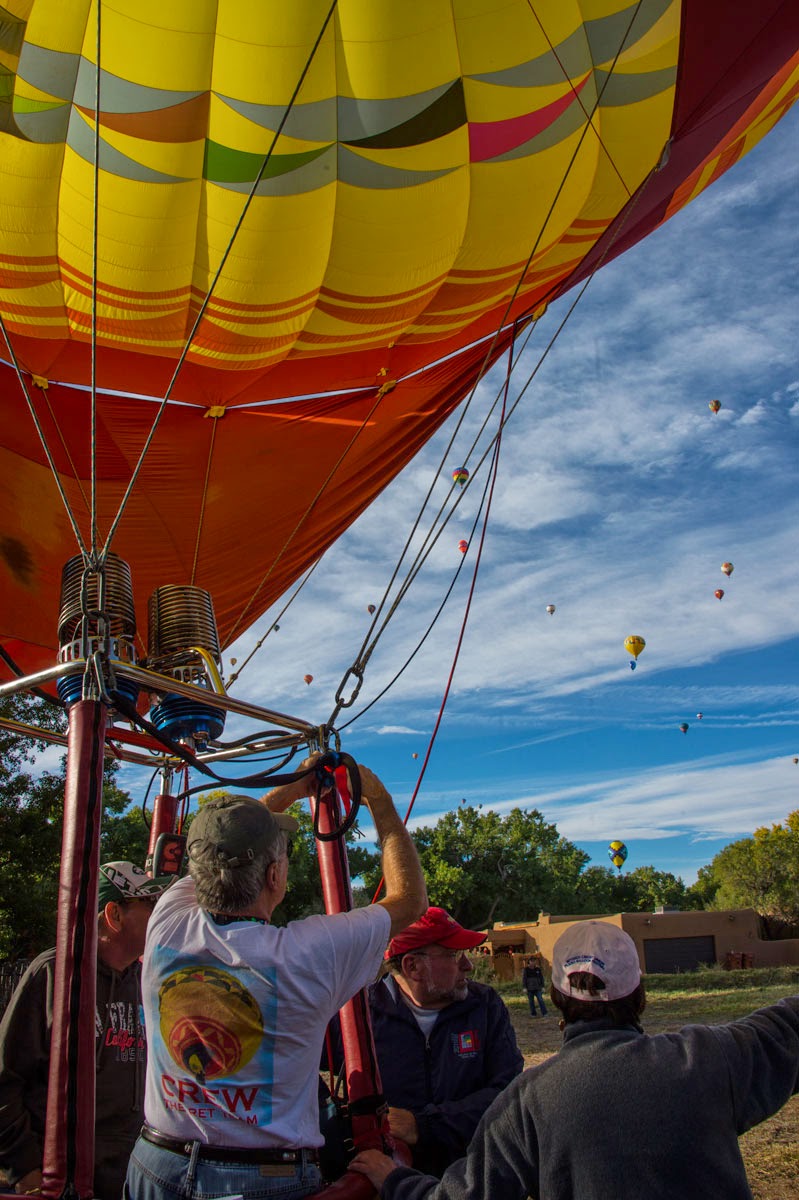 As Richard releases the safety line attached to the van, they are off into the wild blue yonder.  Well not really, their task is to capture the wind at whatever altitude is required, to get them back over the field to throw their bean bags for the competition. 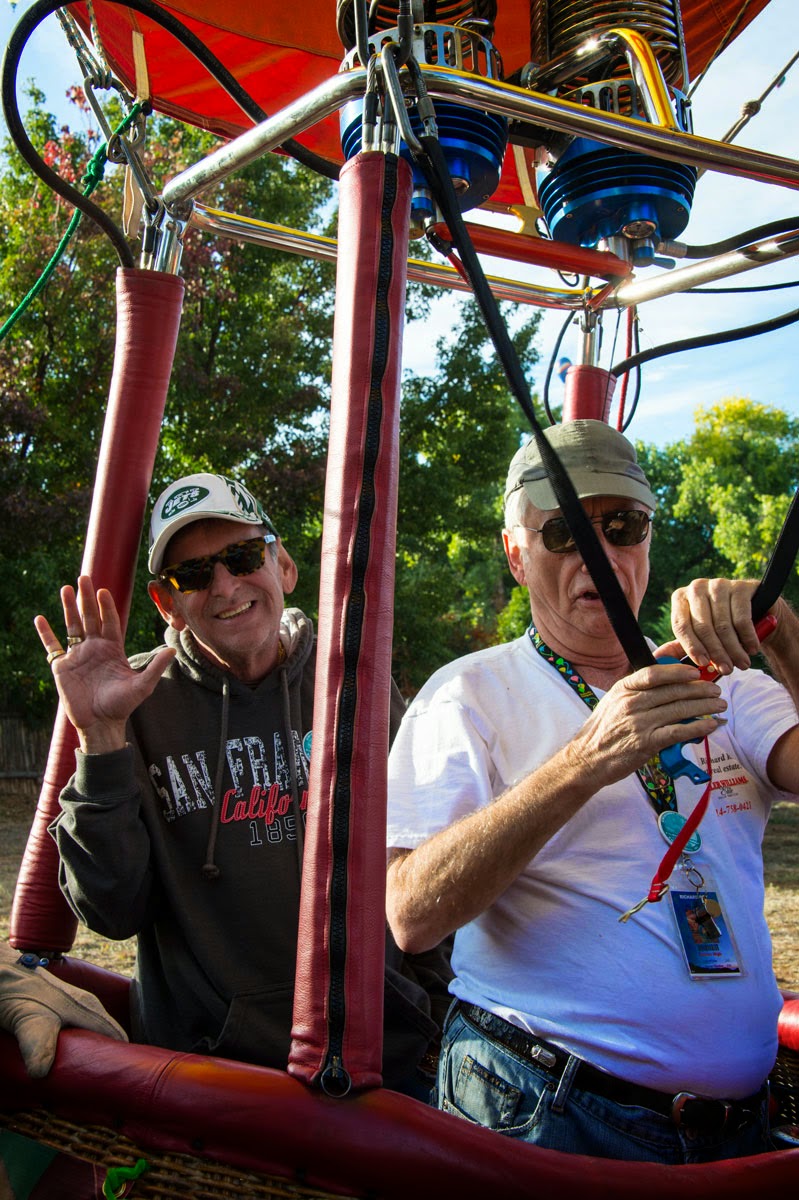 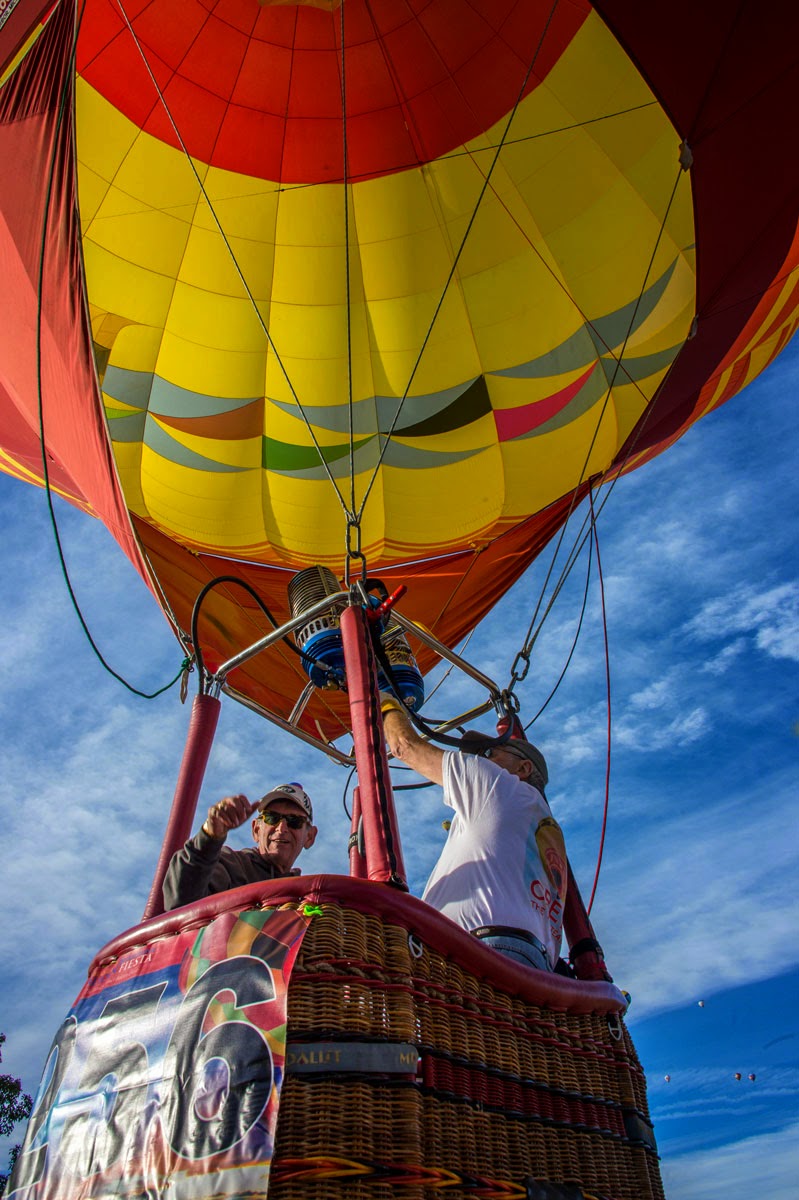 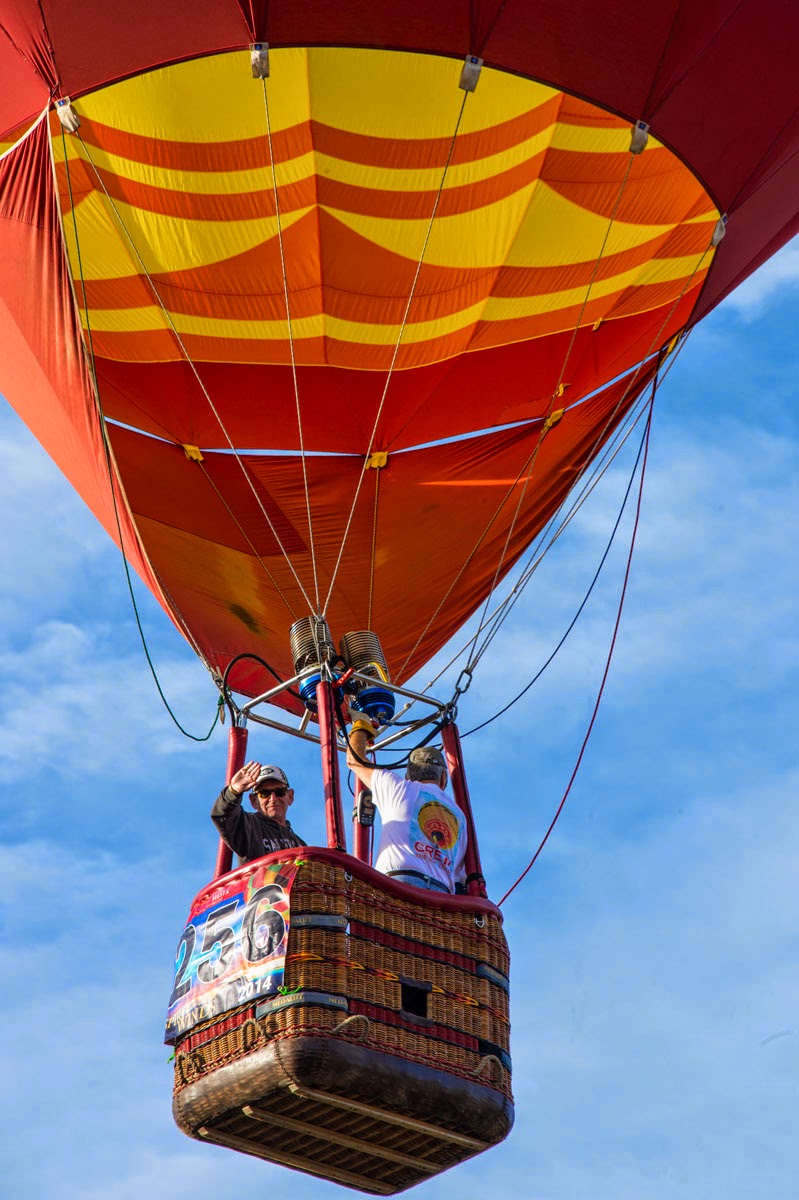 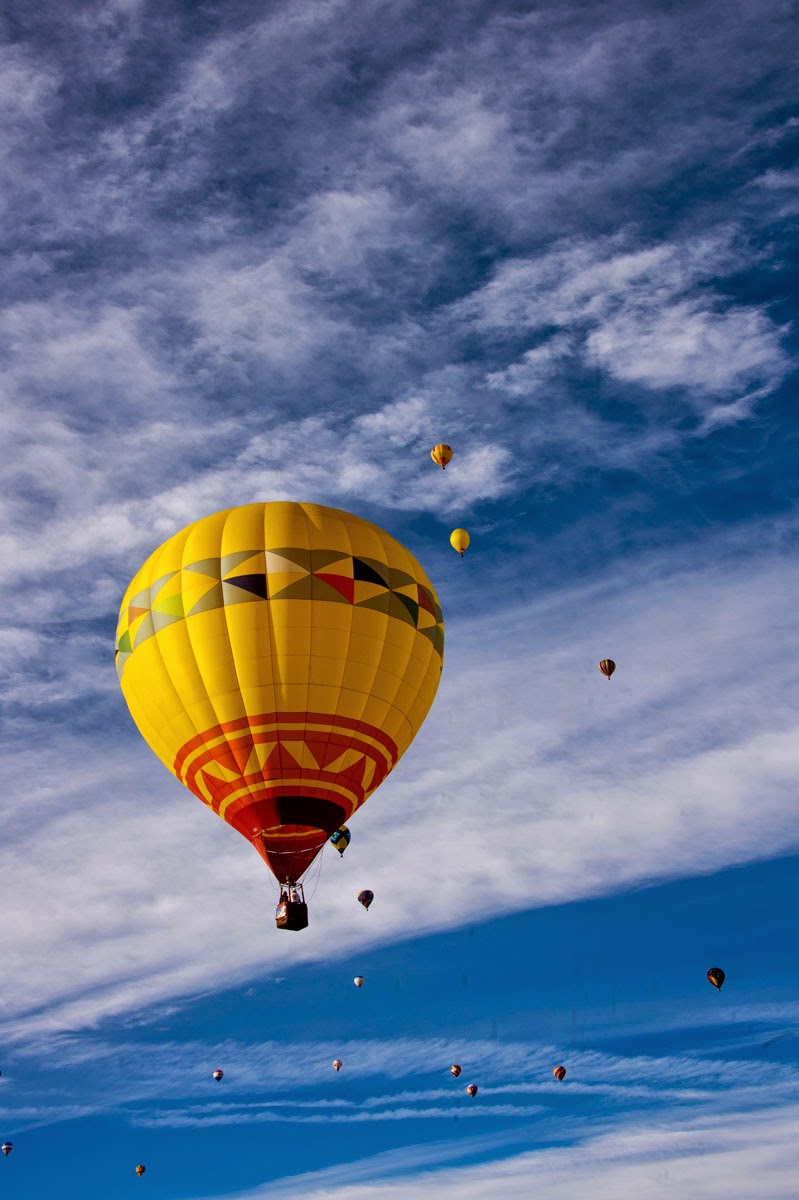 Once he's off, we pack up the rest of the gear and follow back to the field.  As we were pulling out, these two were getting ready to launch. 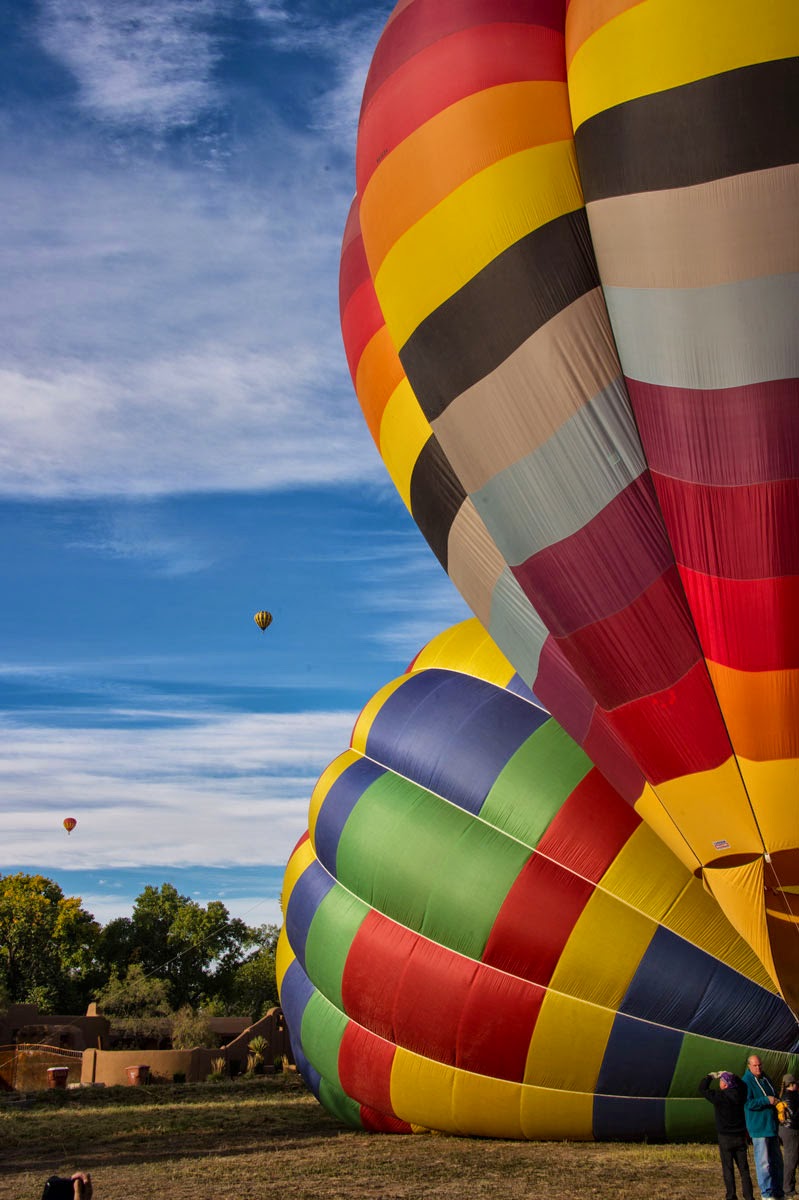 Winds blow very different directions at different altitudes, so it's no easy trick to get to the 85 acre field where they must descend ... but NOT touch ... the field and try to hit the mark.  Then they are allowed to land at the end of the field. 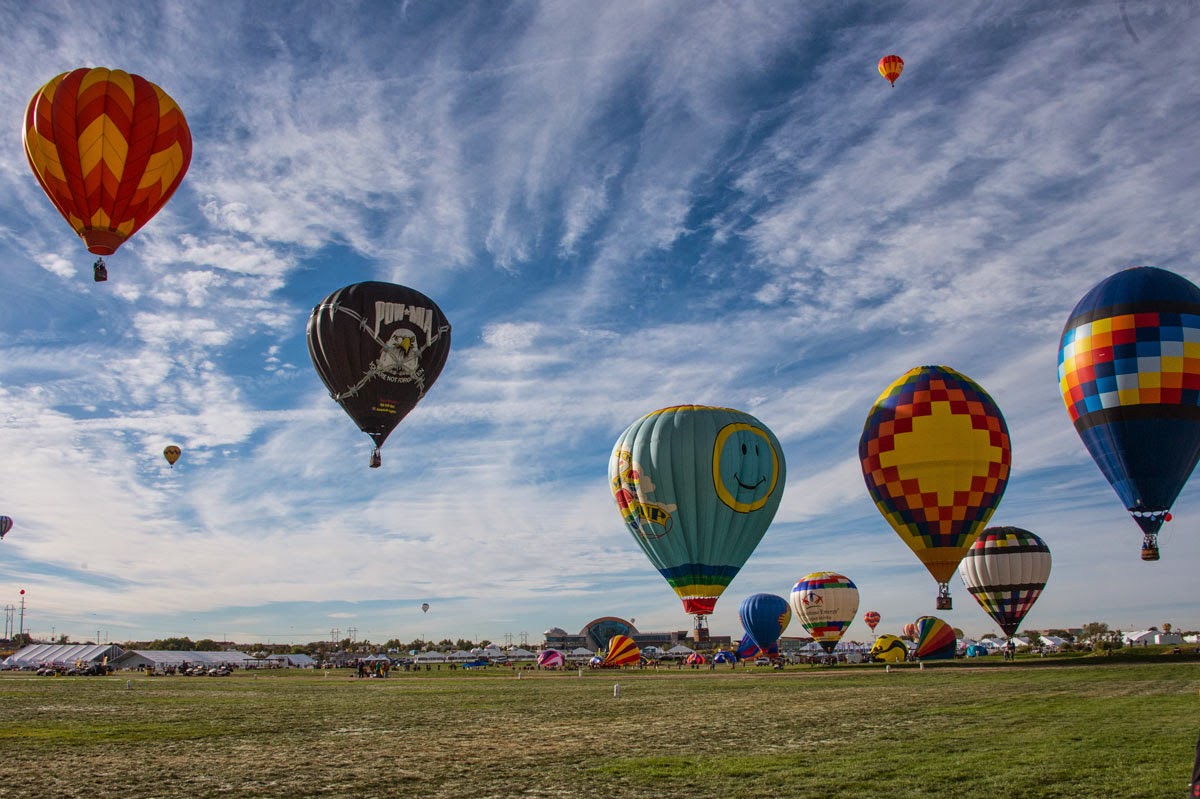 The POW MIA balloon did just that!!  Unfortunately this time, Richard wasn't quite able to descend because of the many balloons just below him. 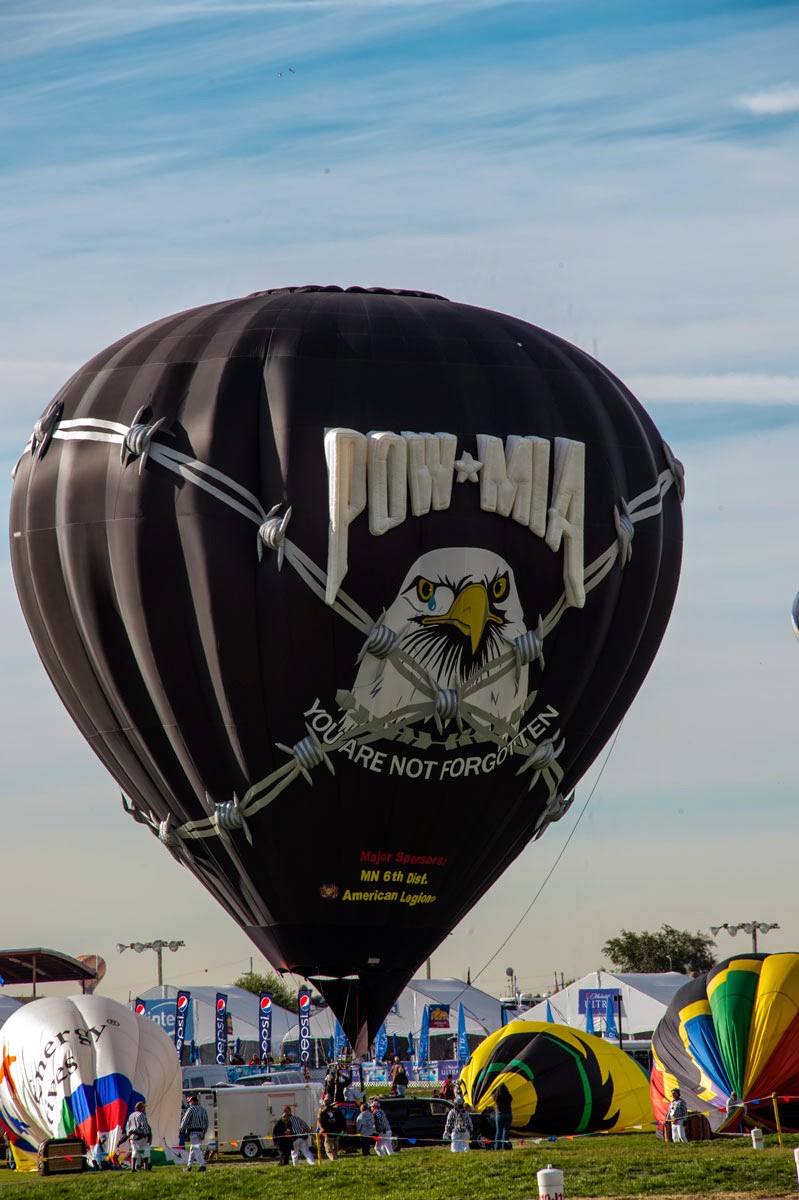 As he headed West, we followed, stopping occasionally to check the map for areas he might land that had roads we could travel.  After a few turns here and there, he brought it in for a perfect landing on a  gravel road maybe 30 feet wide with fences on each side.  I have no more pictures, because once that balloon starts to come down, you don't want it to hit anything sharp ... in other words, keep it on the road!!  There were 7 on the crew today ... and we got her done amazingly well!!  As we packed up, the neighbors came by to congratulate Richard on his landing ... which I must say was pretty spectacular as he just lifted over the roof of the house, went between the branches of a tree and came down in the middle of the road!! 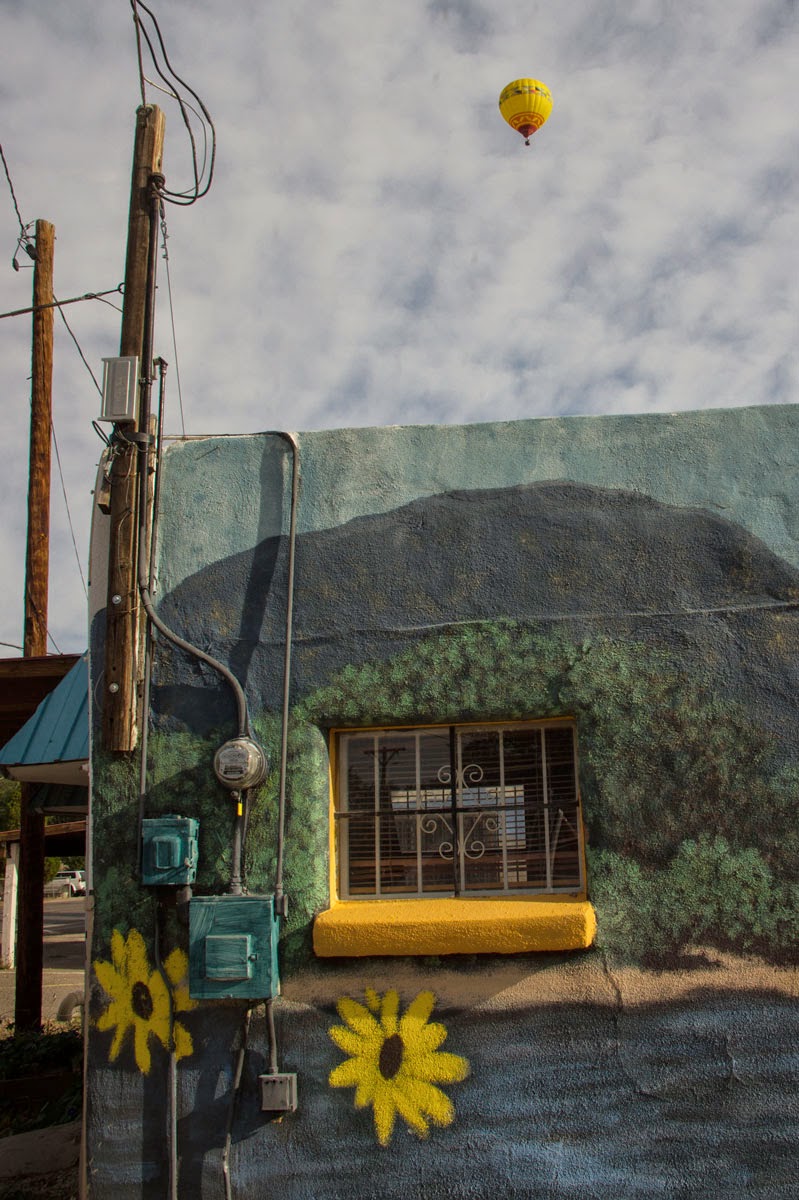 While Richard and Don took the basket holding the propane bottles to the refill station, we snacked on the field, eating goodies Barbara and Gail brought along.  From there, Richard picked us up and drove us back to the RV park.  Now THAT'S the kind of pilot you want to work for!!  We do it all over again tomorrow!!!  I can't wait!!!