Yes we are in New Mexico, but last night there was a nice moon over the Mexico Balloon!!  As we entered the field yesterday evening, everyone was hoping the wind would die down for the evening GLOW.  That's when all the balloons go onto the field, inflate and "glow" from the fires heating the air to keep them up.  All are tethered by ropes and people, so none can leave.  It's a pretty amazing display!!  To make it even better, we are getting close to a full moon ... 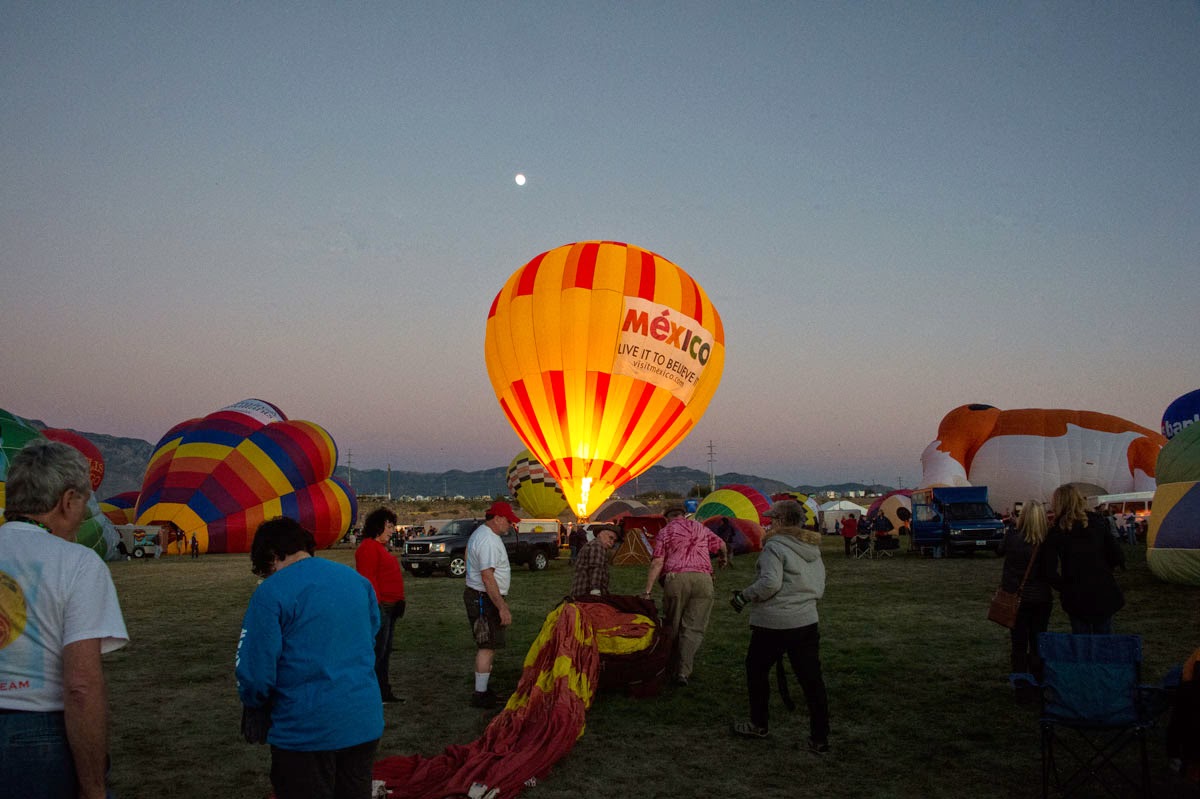 Here's a BEFORE picture of the field ... 85 acres of beautiful grass for the balloons to set up on.  Although there are ribs of heavy webbing, the main portion of the balloon envelope is very light parachute material that can be easily damaged by cactus, fences and trees. 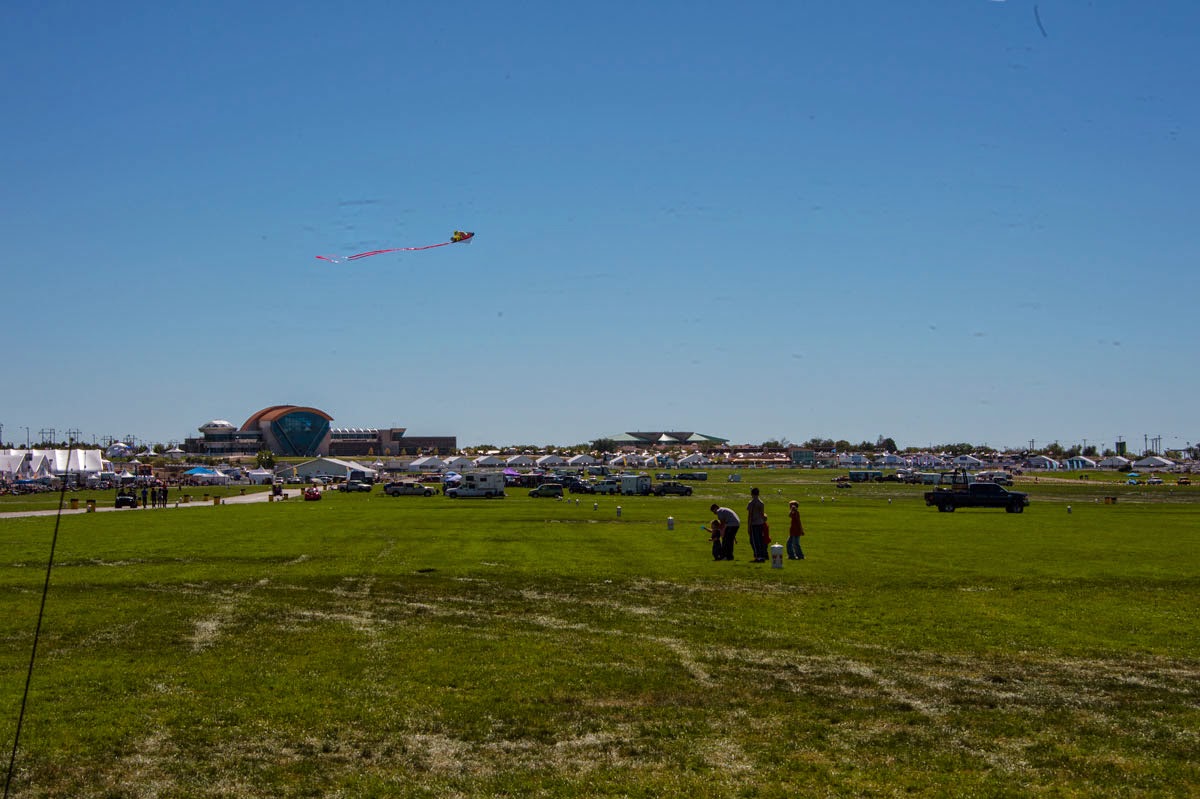 Since my pilot wasn't flying, I went with Barbara and Tom, along with Gail and Jim McManus to work for Richard Ret, Golden High Balloons from Dallas Texas.  The basket is hanging off the back of the van, with all the other gear packed inside. 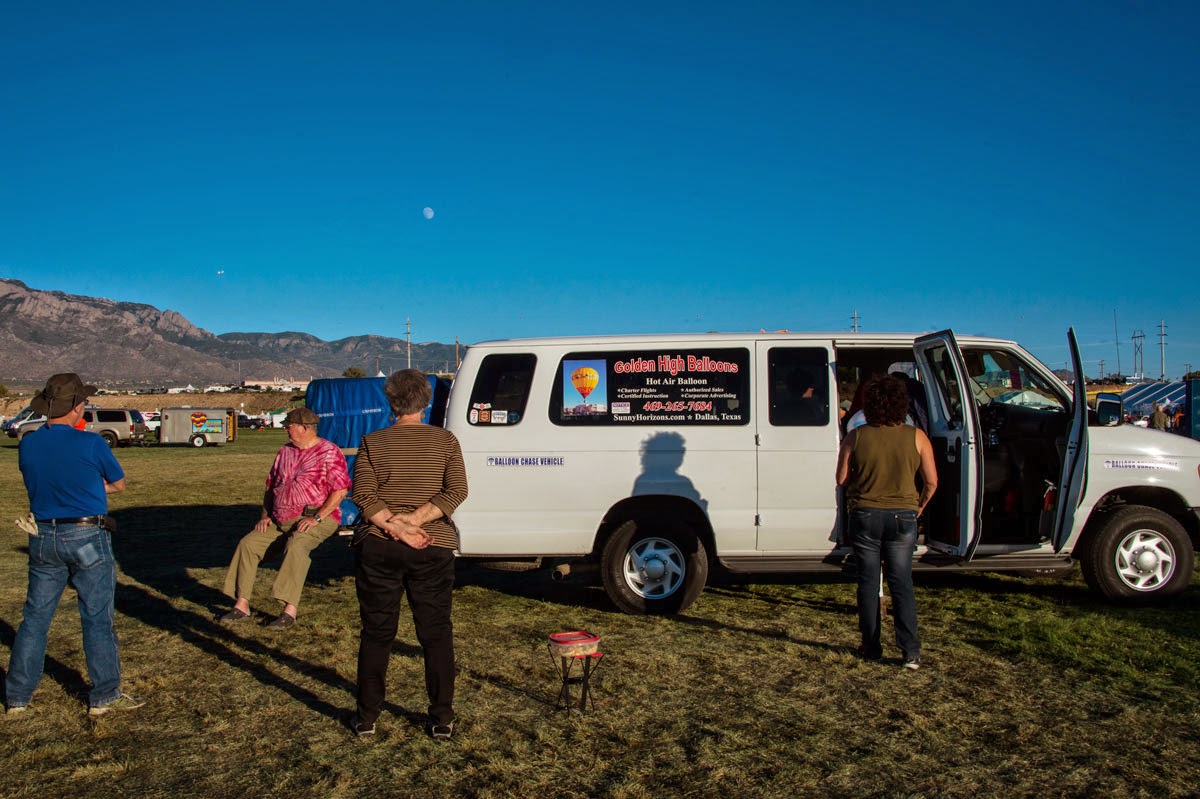 This was probably the smallest rig I saw ... a jeep with the fan tied to the front bumper and the basket barely hanging on to the back!! 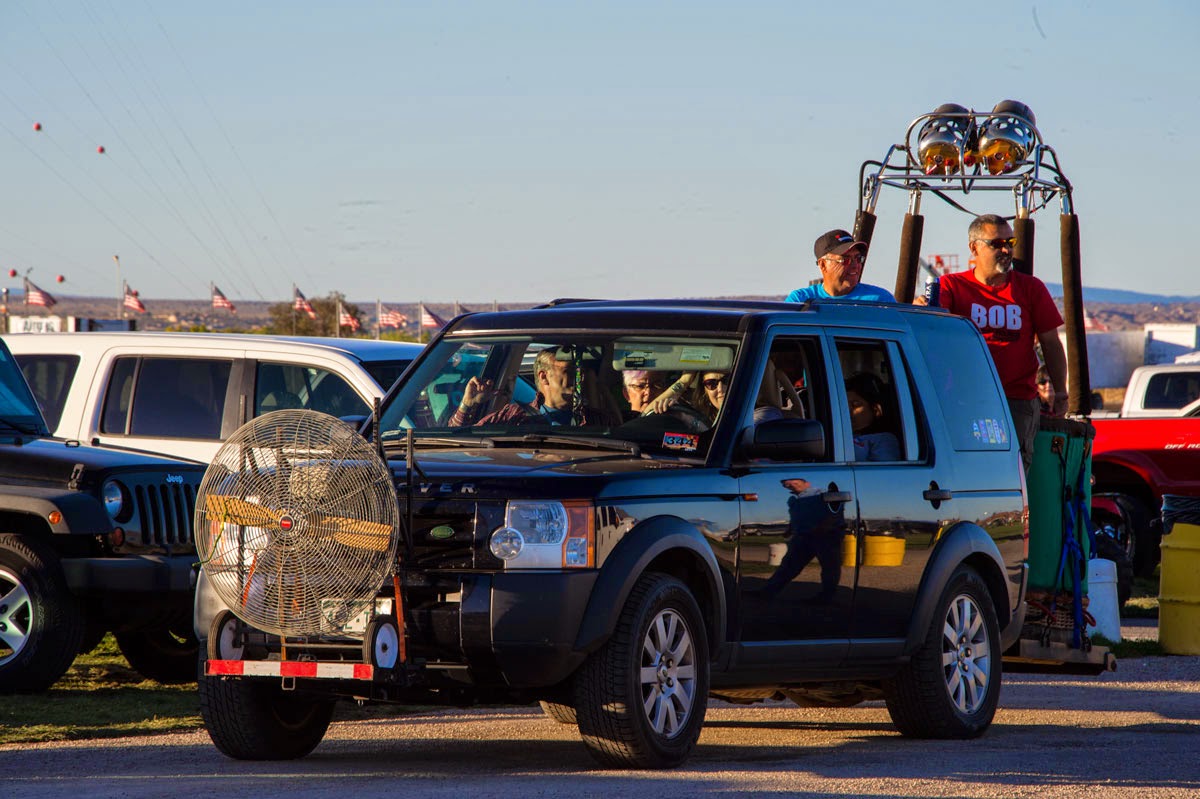 Since I KNOW you wanted to see how they get these things in the air, I'm going to show you how!!  By the way, not just anyone can walk on the field and crew.  The 80 some Boomers here had to watch a Pilot/Crew Safety Video and sign paperwork, as well as get some training before they hit the field, but YOU can do it too!!!

Once the basket is unloaded, the huge bag with the envelope is dragged out maybe 50 feet.  Once the bottom portion with the cables for rigging is removed ..... 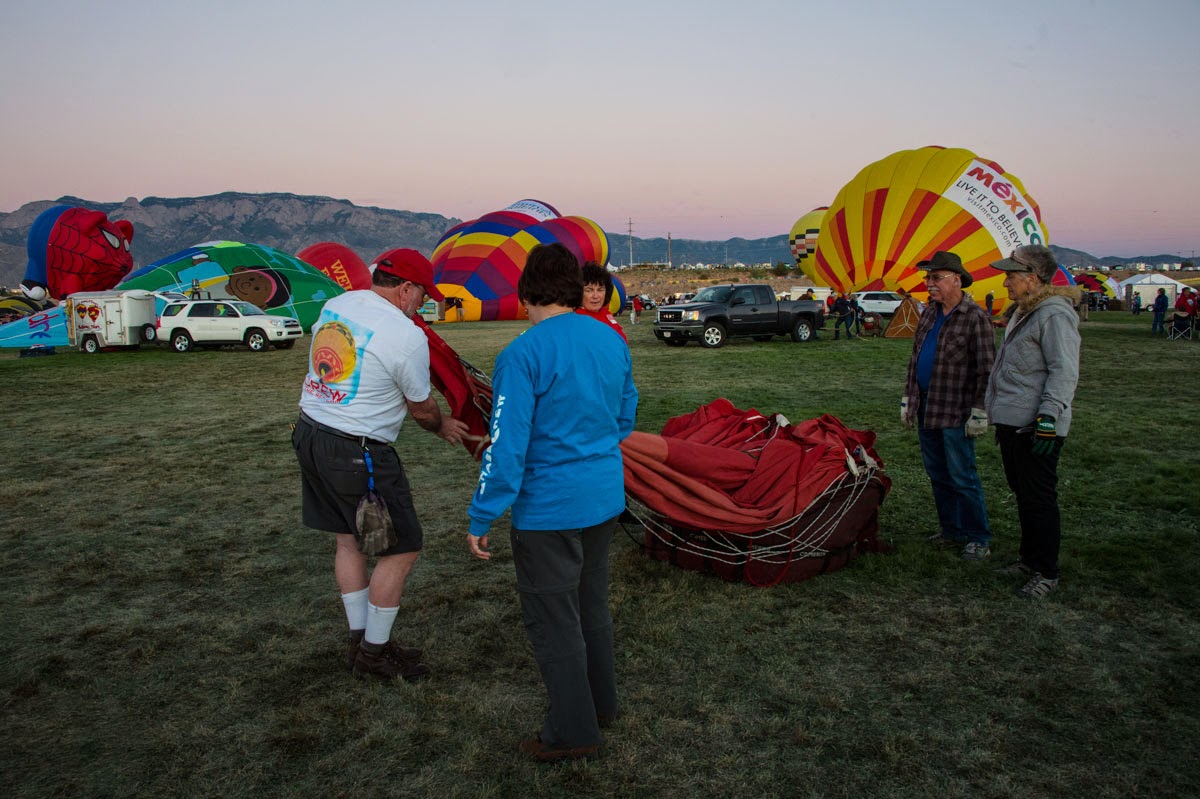 you just walk the bag away from the basket and it unfurls onto the ground.

I'm making this easy to understand I hope ... the frame with the burners is attached to the basket, then it is laid on it's side so the balloon cables can be attached.  There is a specific order and way to do absolutely everything ... for safety purposes. 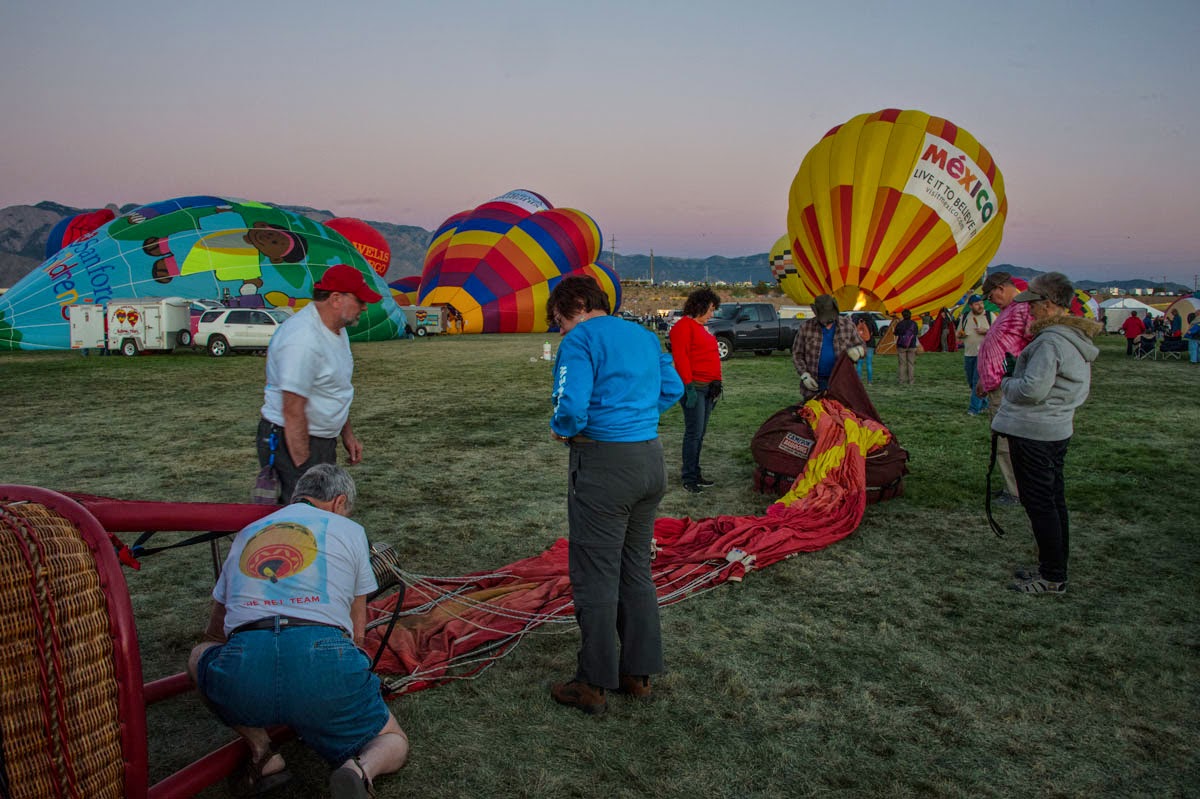 The fan is set up ... Barbara is manning it, making sure no one comes close and that she turns it off at the correct time.  Tom and Mrs. Ret hold the throat open so cold air fills the balloon, while Crew Chief Jeff and Crewman Jim, hold the crown ropes to keep the envelope straight. 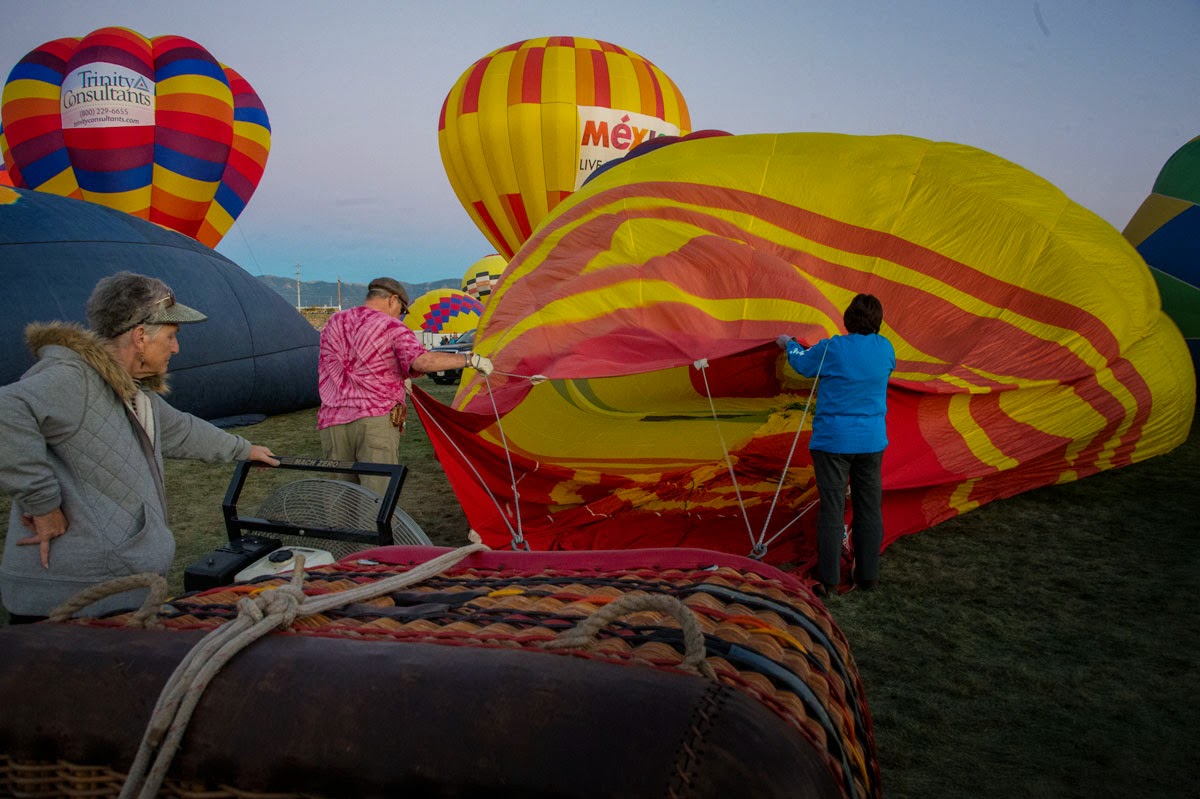 The crown is that yellow circle at the top ... they are attaching it with velcro.  The air pressure will keep it closed until the pilot pulls the cord to open it upon landing, which lets most of the hot air out. 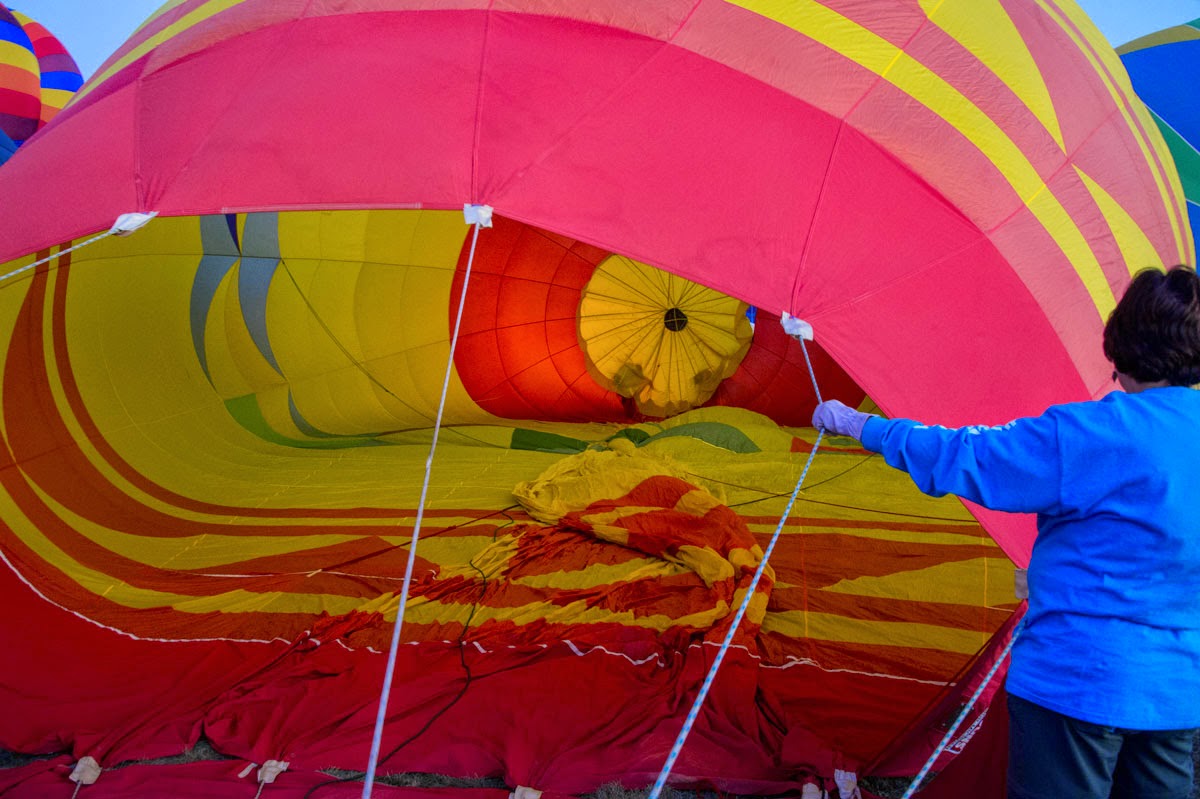 This is how close we were to other balloons on the field.  There are so many and they are just huge ... so we are literally wall to wall.  Besides taking pictures, I was keeping the right side of the balloon away from the neighbors burner.  If they ignite, these balloons are goners!! 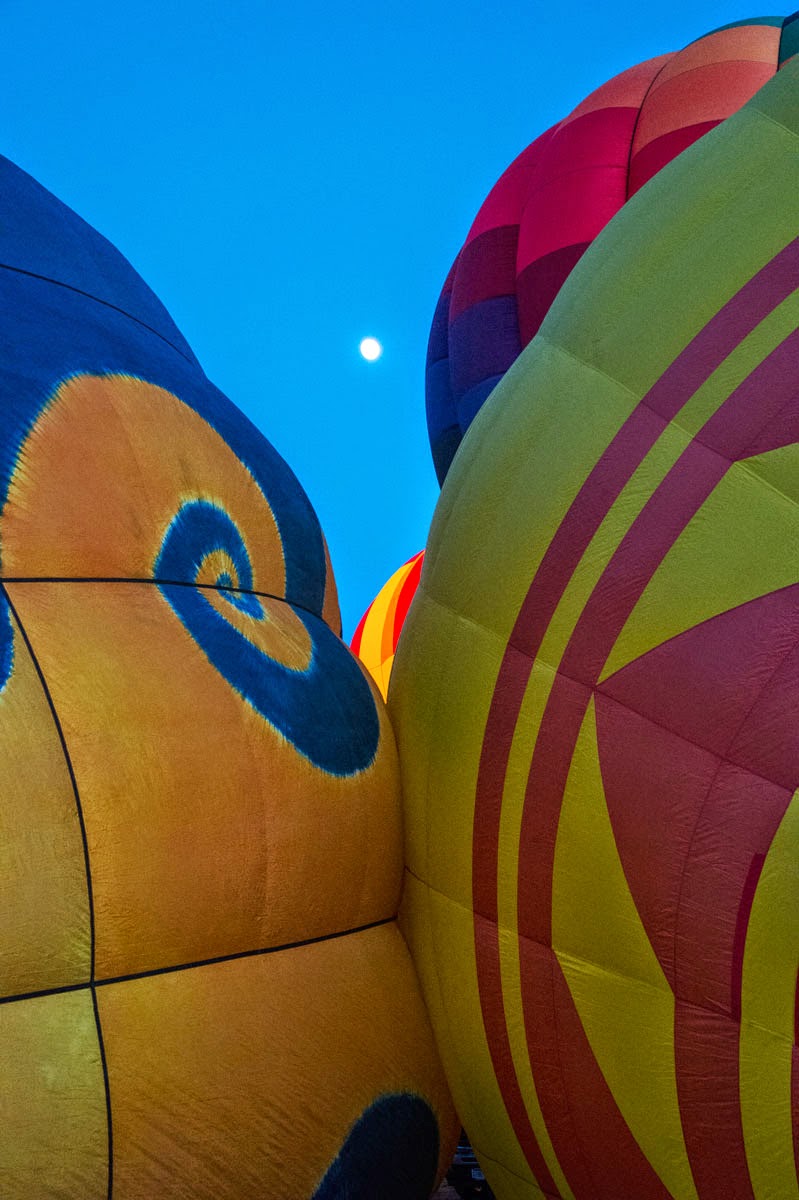 Once they have a good cold fill, they start the hot fill, turning these propane burners on and off to heat the air just enough that the balloon rises into the air. 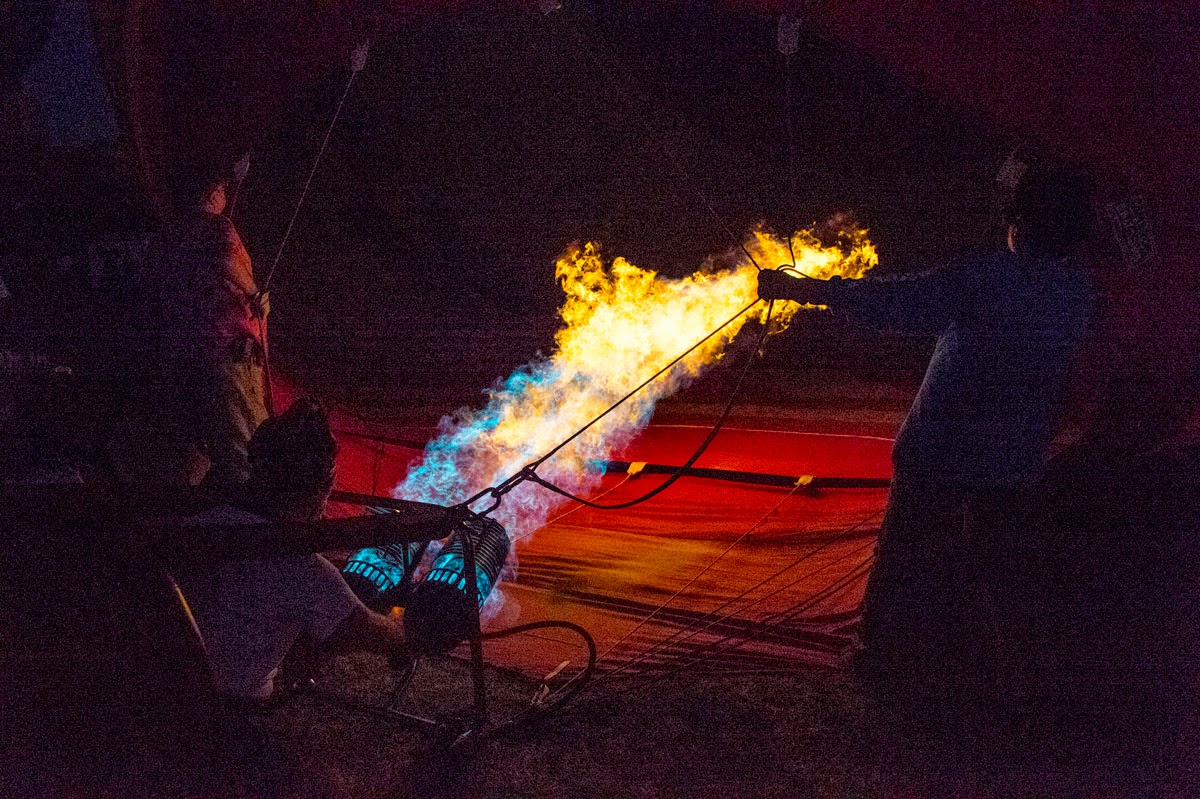 Once that happens, we all run and jump on the basket ... called "weight on".  Between four of us holding down and Richard giving it short bursts of hot air, we stabilize the balloon for the "glow".  Actually, we stay in this position while the pilots hit their burners, sometimes fast, sometimes slow and in sync if they can, putting on a beautiful show for the crowd!!  Richard's burners are on here, as  it is really pitch black outside!! 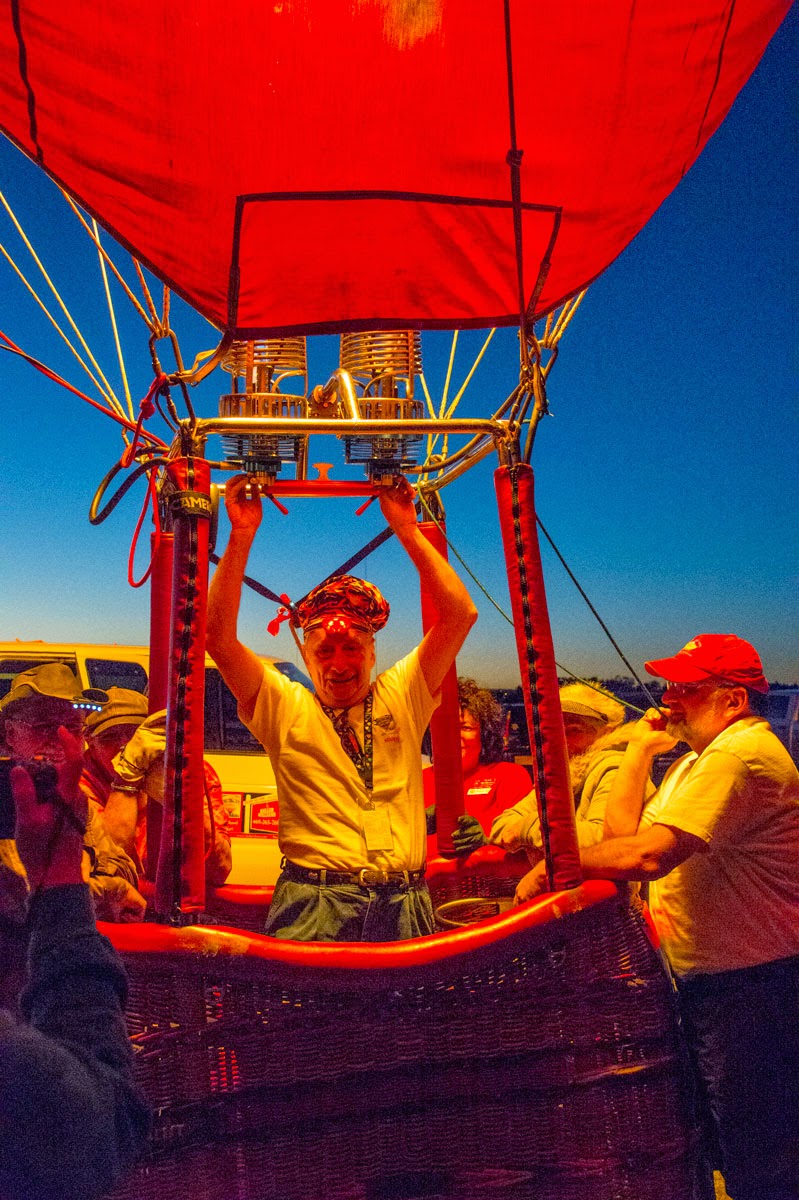 With most balloons, you can't see the flame, but Richards is light in color, so the flames show up nicely!! 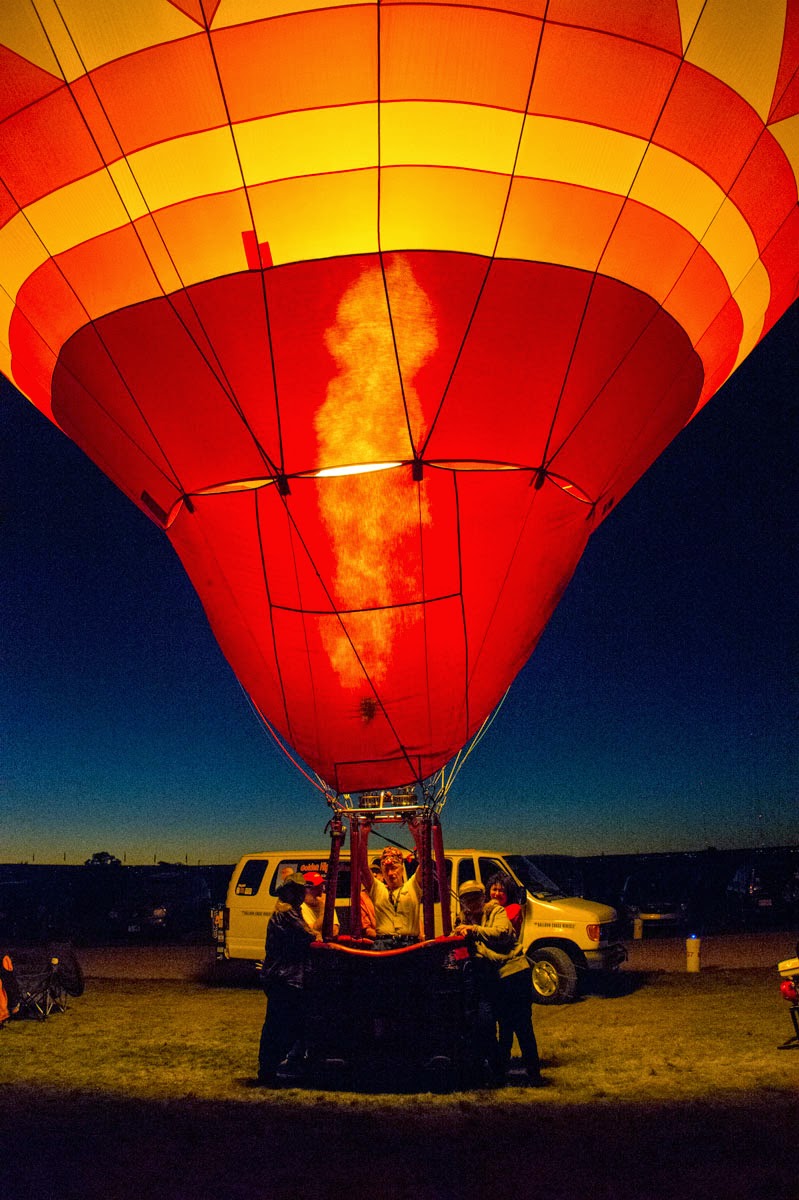 Since we had enough weight-on people, a couple of us got to walk around for pictures.  Here's Richard in the middle ... "kissing" both side balloons. 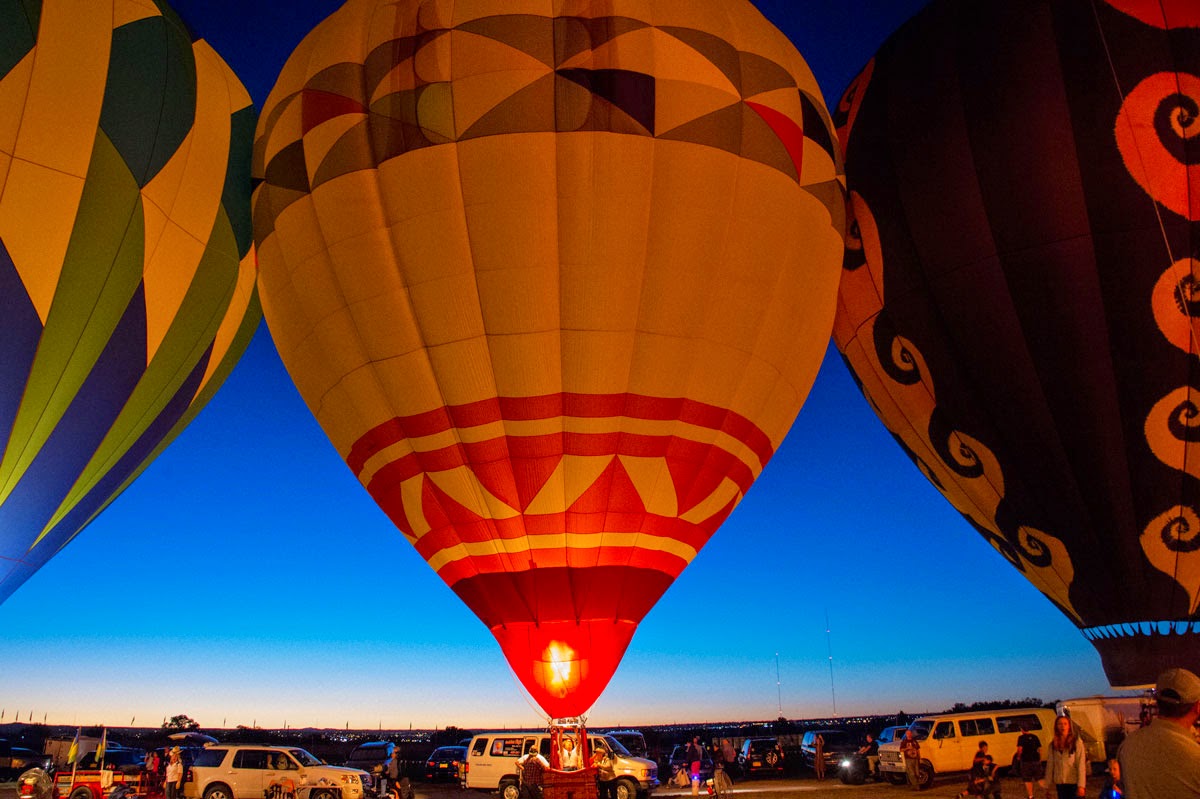 There are many "special shapes" ... meaning balloons that look like Dark Vader, Yoda, this Bassett Hound, butterflies, fish, whales ... every kind imaginable.  Later this week there will be a Glowdeo with the Special Shapes ... that is if it doesn't rain!!  I'll show you more of those then. 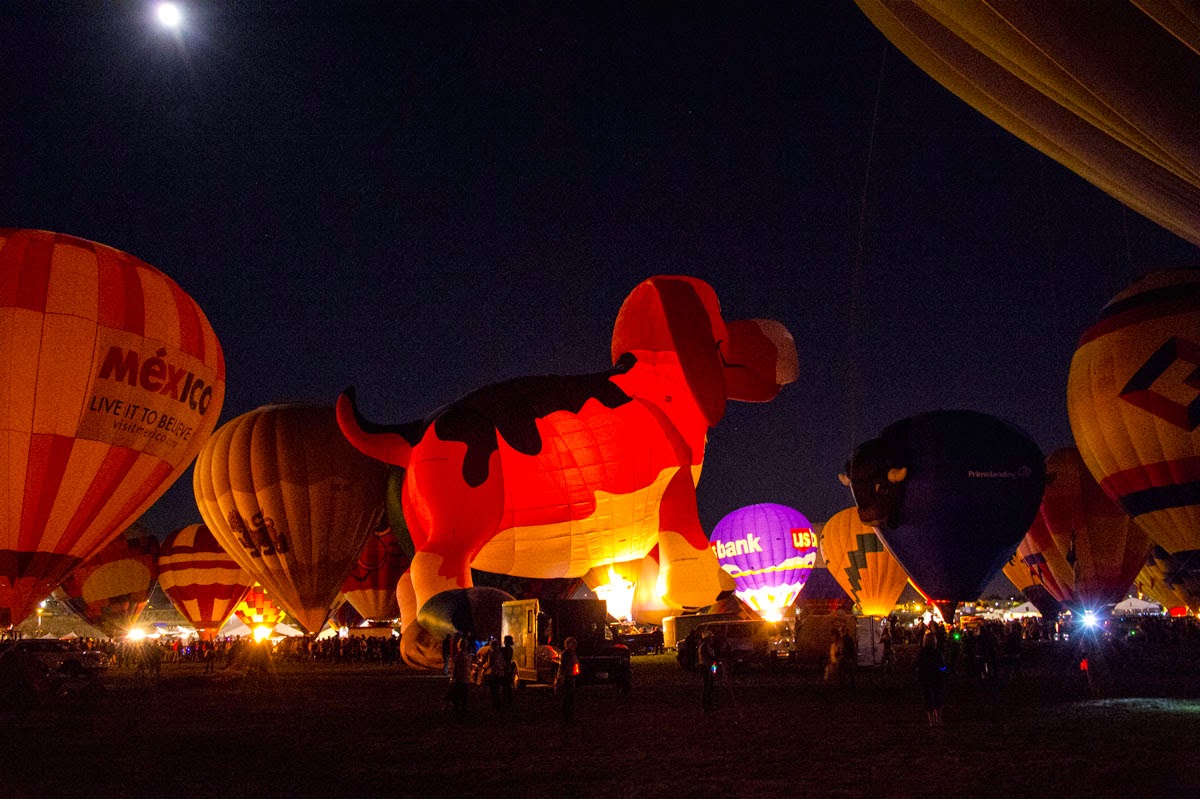 It's a sight to see ...  and even more amazing to see them launch into the sky.  So far there has been only one emergency ... one pilot had a severe heart attack after he launched.  It's a miracle that he was able to set the balloon down with his passengers, who jumped out and kept it in place until the emergency vehicles and his crew arrived.  He is still in the hospital, but doing better and we wish him well.  Another Suburban and trailer, with the balloon and gear was stolen, and so far hasn't been recovered.  The owners drove back to California, got another truck and their other balloon and returned to fly today!!  These pilots are crazy about soaring through the air!! 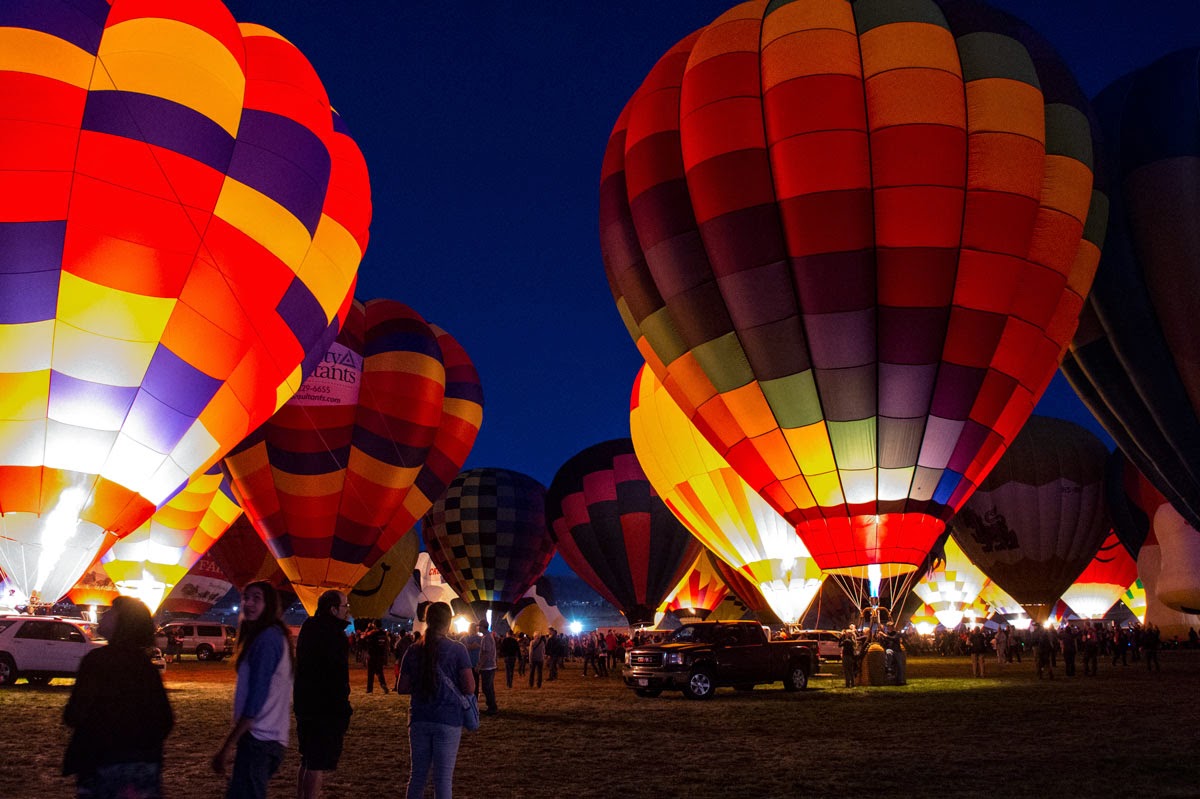 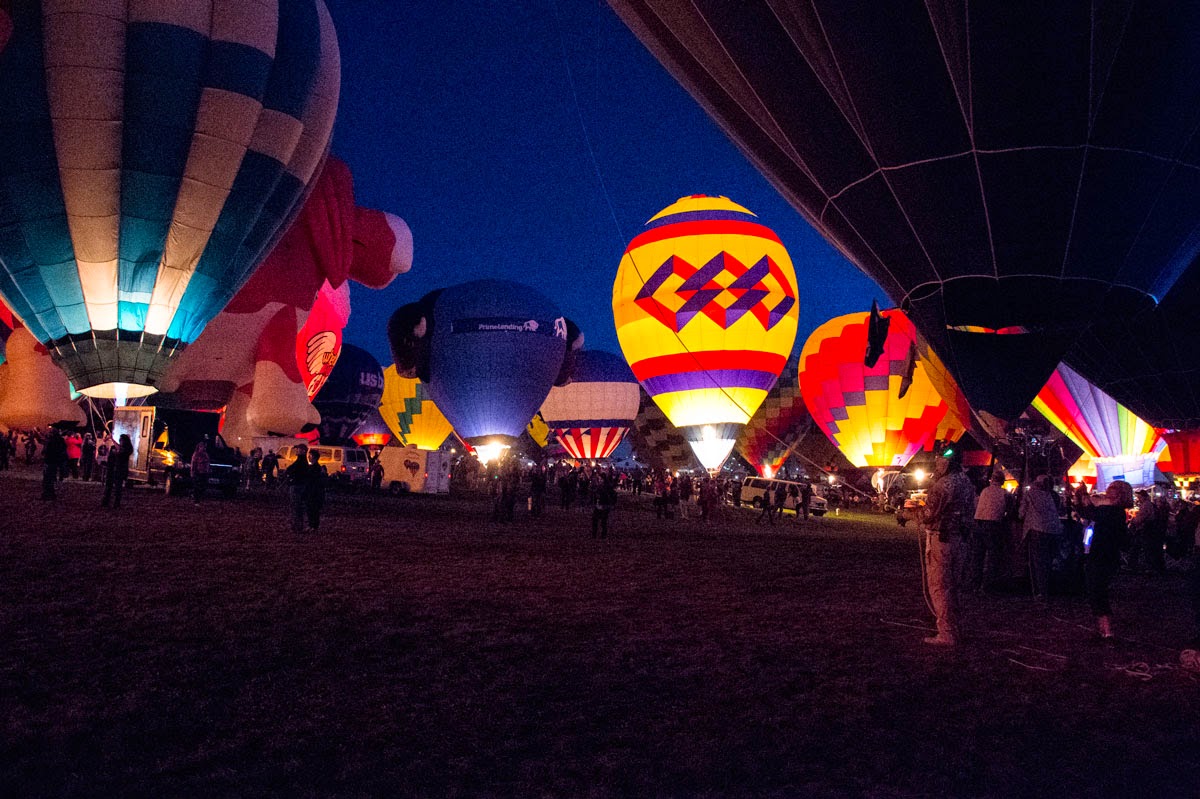 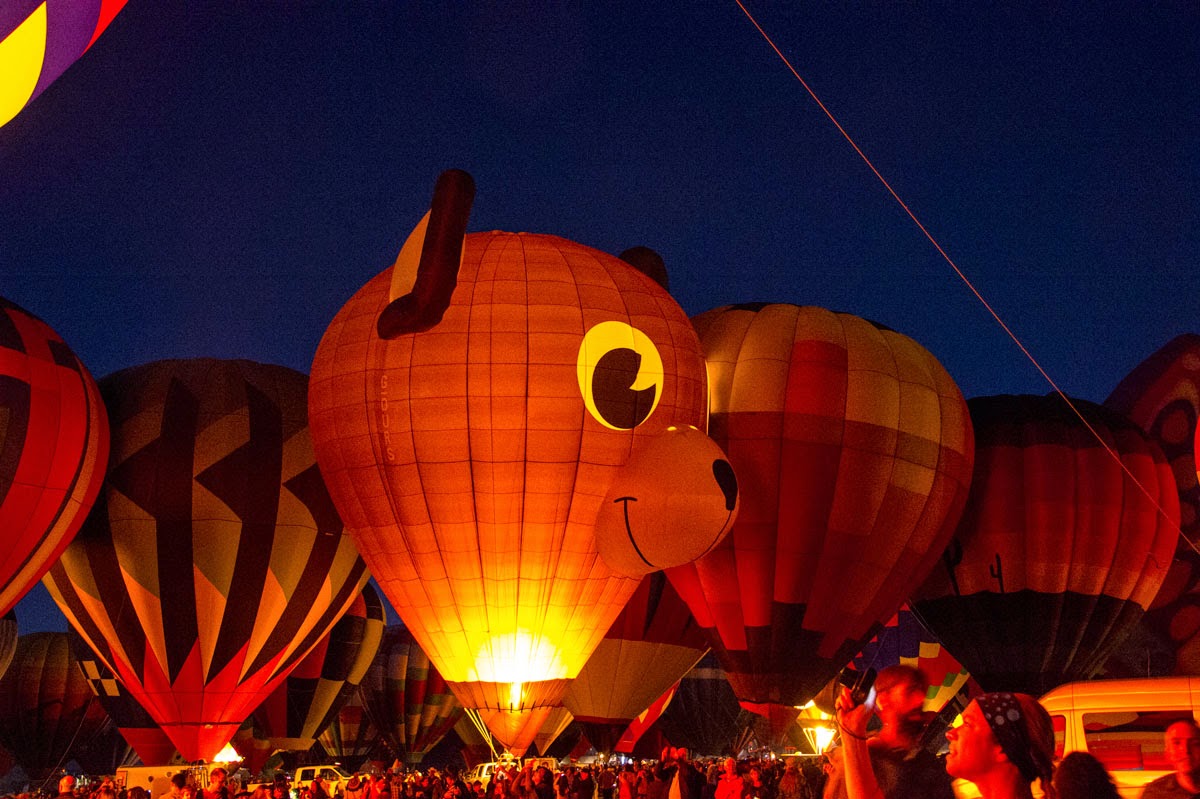 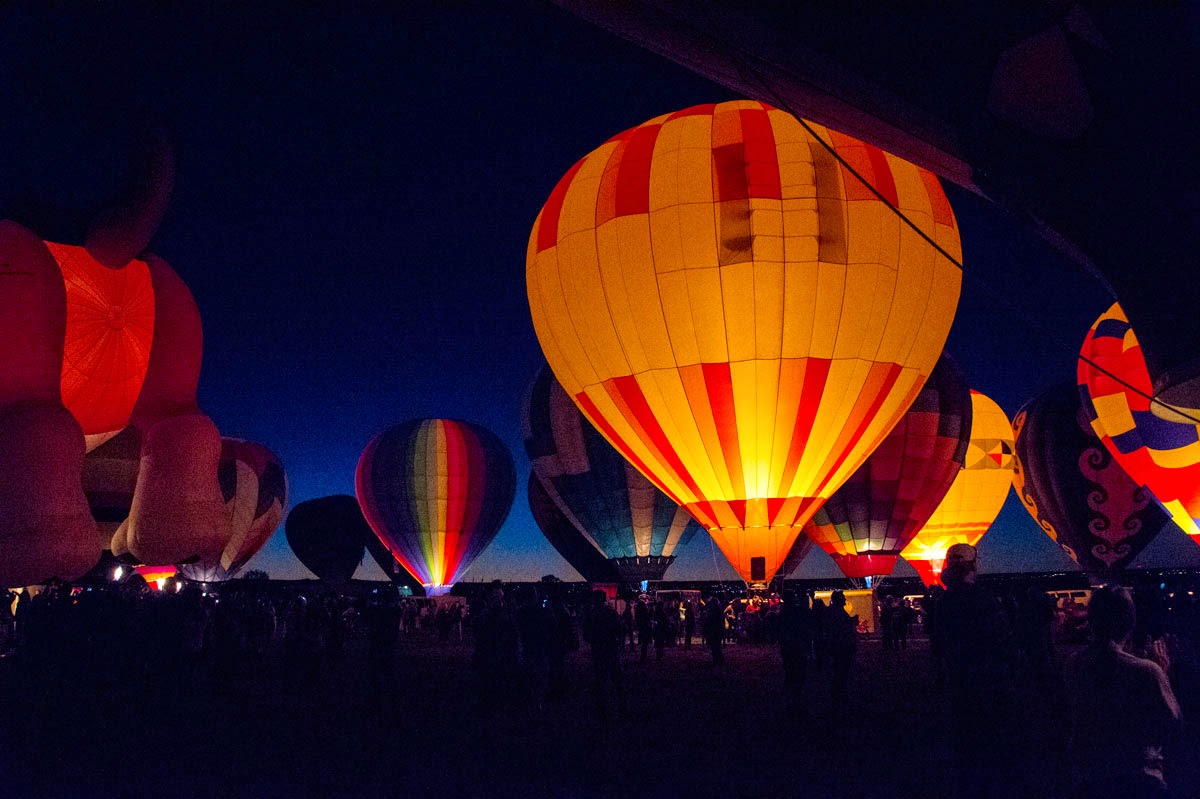 By now, I've been up since 4:00 am ... it's 8:00 pm because the fireworks started.  They shoot off a couple of cannons, which is our signal to drop the balloon, get the air out, tie up the envelope, unhook everything and pack it all back up for the next adventure, which was this morning's competitions. 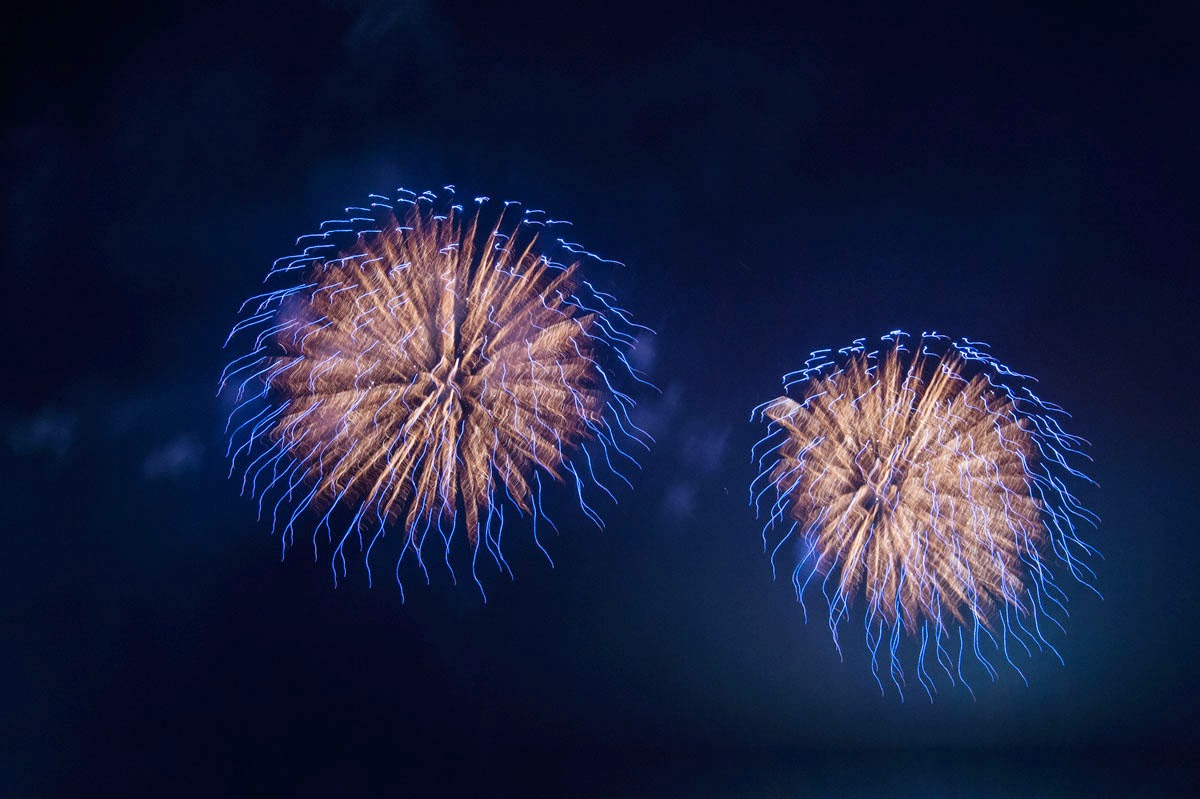 I didn't take my tripod since I was working, so these aren't great, but you get the picture!! 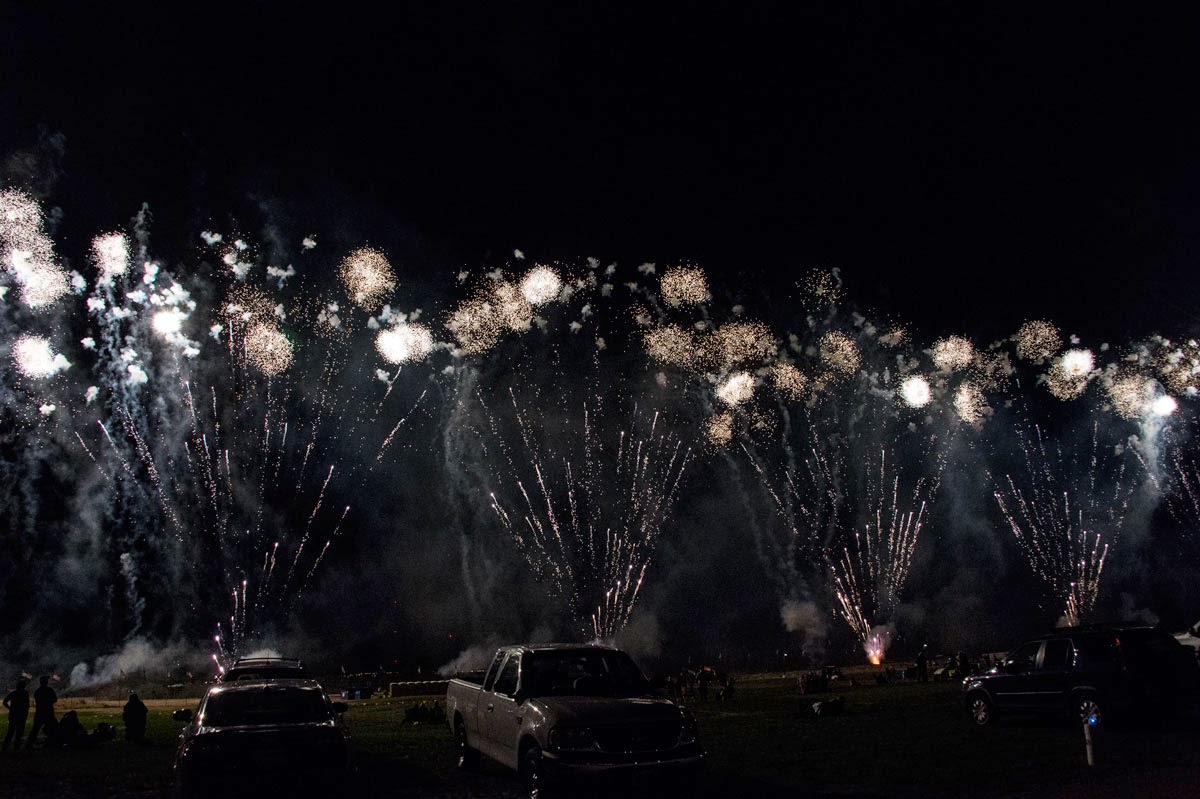 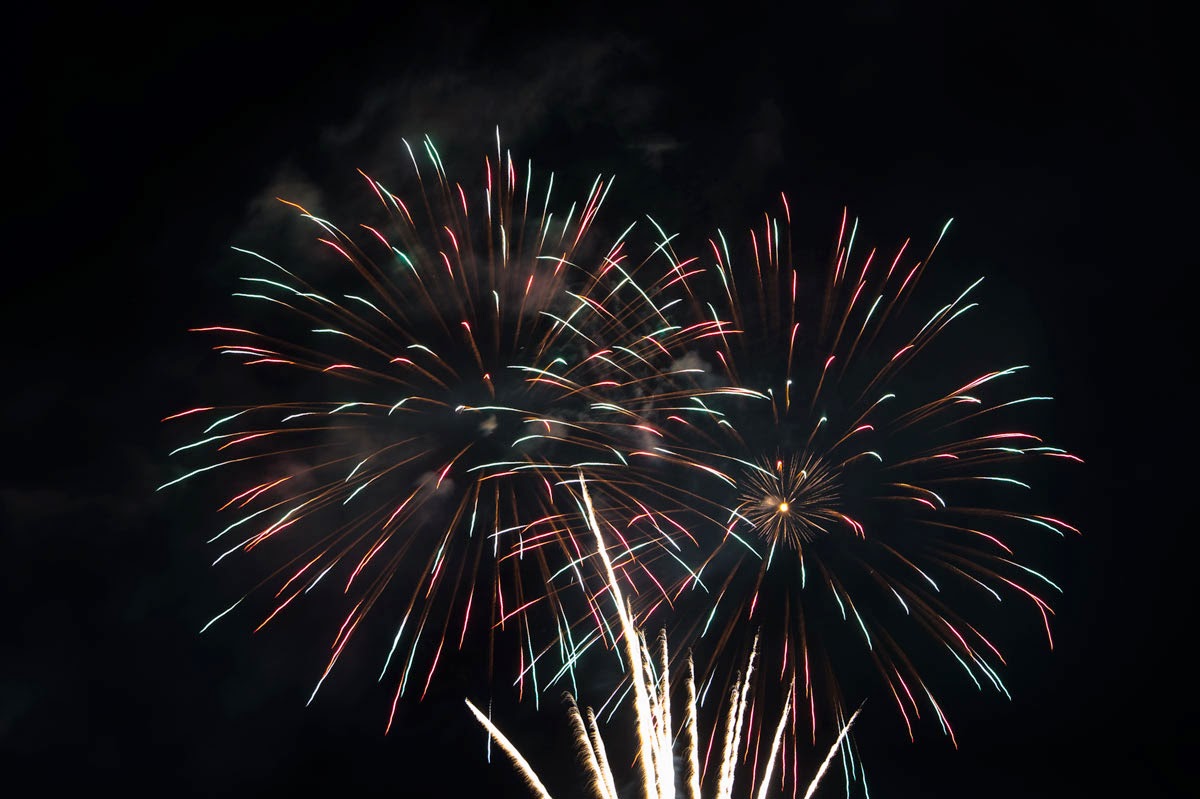 Another 4:00 am rising, with bleary eyes, I took off for the bus and forgot my phone.  DISASTER!!!  That's my only way to contact my pilot in order to meet up for the early morning balloon competition.  Each contestant ... and there are hundreds ... must travel at least one mile from the field, find a suitable spot based on the wind direction, launch their balloon, fly directly over the field and drop a bean bag on an X marked on the ground, then fly off and land ... somewhere ... where the chase crew can find them.

I finally contacted race officials and asked my pilot be paged when I found her, front and center.  In two seconds, the Official Photographer asked for all the women pilots to group together for a picture. But WAIT ... I'm NOT a pilot ... as I tried to shrink into the background, but the nice ladies just pushed me back to front and center.  I was finally able to duck behind a tall gal, so I hope I'm not in the picture!!  We gathered the rest of our crew and headed out to Corrales, across the Rio Grande River, which our wind direction told us was a suitable launch point.  It's just a shot in the dark really ... at different heights, the wind blows different directions, so you have to be pretty good to even get CLOSE to the field ... which many don't!!

To make a long story short, since I was working so hard (and driving the chase vehicle) I have no pictures, we found a spot, launched her, then watched on our phones special tracking app as she crossed directly over the field  YAY!!! ... at too great a height to throw out her bean bag  BOO!! ... then headed southwest.  We drove back across the river, then back, then around, under the freeway, down two dead end alleys, before finally finding her in someone's back yard, along with two other balloons.  We finally all got down, packed up and on our way back to the field.  I came straight home and collapsed on the couch ... just long enough to catch my breath before giving Cooper a haircut ... it's too hot for him here ... repairing my broken fingernails and working on the blog.  I'm exhausted and my foot hurts ... so I'll be on the couch for the next four hours if you need me!!!
Posted by Nancy Kissack at 2:10 PM