First off, I want to say how thankful I am to have people who read and comment on my blog.  Some days that's what keeps me going.  You also keep me laughing at myself as I try to describe all the daily crazy adventures, even if it only involves a cemetery burial.   I hope your Thanksgiving Day was filled with happiness, family and good friends.

Mine started off with a long walk.  I woke with a headache having been woken up several times by my Hoo-Hoo buddies.  Obviously I'm a light sleeper because their cavorting in the trees out back wakes me up every time.

Some people, when they don't feel good, get to lay down and they feel better.  I won't get any relief unless I walk a mile or two.  It's just not fair because I'm really good at couch sitting.

There was not much going on except for two peacock escapees hanging around the pens.  These guys are the best watch dogs ever.  We had some on the old ranch in the high desert.  They perch high up in trees and scream every time something comes by, warning all the chickens and turkeys to hide.   Best emergency warning system ever. 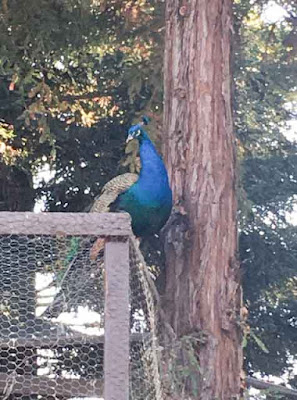 Back home I took out the second $10 turkey, determined to make this one taste better.  Since it wasn't going to be Cooper food, I seasoned it up from one end to the other after first cutting off every little extra piece of fat and skin I could find.  I think that was the problem with the other one.

I gathered lots of rosemary from the most fragrant plant I've ever encountered which just happens to live in my back yard, along with stealing half the thyme from the next Every Plate meal.  Into the oven it went.

In the meantime, it's time for some lunch.  These tacos were next on the schedule.  The chicken came in the usual package.  I assumed ... you know what that means ... I would cut the chicken up.  Thank goodness I was holding the bag over the sink, because it all fell out, right into my not-so-clean sink bottom.  Gosh ... how nice of them to cut it up for me!

Well at least it didn't end up on the floor as I washed every little piece and tossed it into the frying pan.  That heat will kill anything, right?  I chopped up the Persian cucumber (who has ever heard of that?) and pickled it with sugar and lime juice.  It just didn't seem too taco-ish but I persevered.

I tossed the bag of cabbage into the cooked chicken and added the sweet chili sauce.  I sure would like to know where they get their tortillas because they were pliable, thin and delicious!!  The drizzle over the top is sour cream with sriracha sauce stirred in.

The taste test:   It was really good!!!  I'll have to see if I can find some of that sweet chili sauce!! 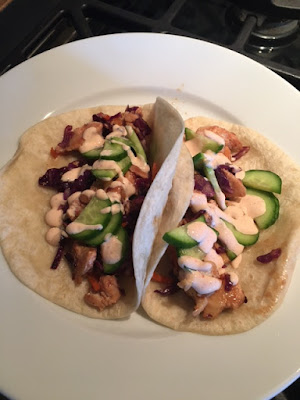 All the while making those tacos, I was babysitting the turkey.  I turned the pan around for even browning and cooking maybe four times and basted it with rosemary butter.  Pretty nice, eh??? 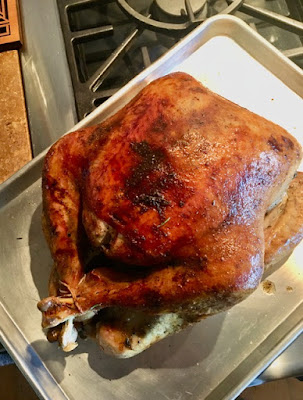 I didn't have a mind to make gravy, but when I saw the drippings, I couldn't resist.  With no mashed potato water (what my mother always used) I scrounged up a can of chicken broth from the cupboard.  Okay, I admit it's the saltiest gravy I've ever had, but the flavor was the best I've ever made. 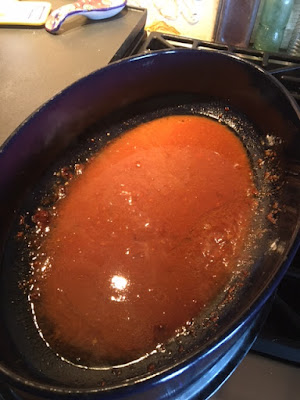 So here's turkey dinner.  A little leftover broccoli, those leftover Thai noodles and turkey with gravy.  Definitely not your traditional fare, but it actually went together pretty well.  I could have gone the entire mashed potatoes, green bean casserole, stuffing route, but knew I would eat WAY too much and be miserable for two days afterward. 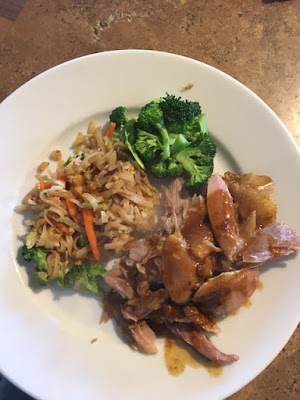 I was so full after that piece of pumpkin cheesecake with mounds of whipped cream that I didn't even eat dinner.  I'm still full, but the next recipe for a grilled onion hamburger is calling my name.

In the meantime, I'm off to the Apple store to talk computers.  Won't THAT be fun!!

Posted by Nancy Kissack at 5:12 AM