All Quiet On The Western Front

With great expectation, I walked the long trail to the skunk trap once again.  The door was still open, meaning no stinky stinker to relocate.  That's weird, even the extra kitty food I put out for the REAL kitties was still sitting there.

Maybe it was ghosts, I don't know, but there was 84 videos on that camera from that night.  I had completely formatted the card previously, so I knew it was legit.  How could that be?

I went through ten of them, only seeing a bug here or there flying by.  Having set the camera to medium sensitivity, I was surprised at that.  Then I found the culprit.  It began to rain big drops.  The camera took a 20 second video every time it saw a big drop.

I checked a few more, just to be sure, but there were no critters visible.  I was a little disappointed, but relieved to know it seemed to be all quiet on the western front.

A couple hours later, I spotted this big guy sitting on the fence.  I wonder if that's why the kitty cats have disappeared. 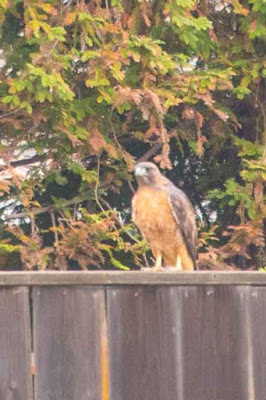 He flew down to the empty field behind a couple of times before finally coming up with dinner as he flew off to the tallest tree.  I had a thought here ... do you see where the Indians got their idea for their war bonnets? 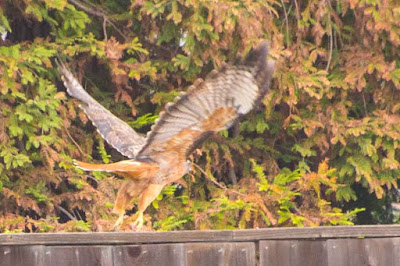 I just happen to have one ... one of my favorite pieces ever. 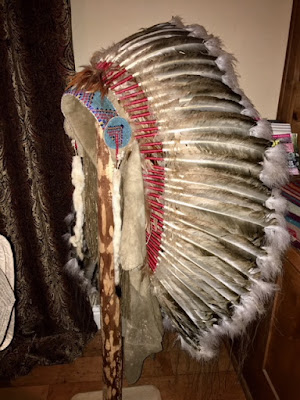 With no skunks to be looking for ... although I never trust that, I go out with my flashlight anyway just to be extra sure ... I zoned in on all the little birds eating their Denny's special in my back yard.  They seem to live in my rose bushes at night.  SO much better than skunks!! 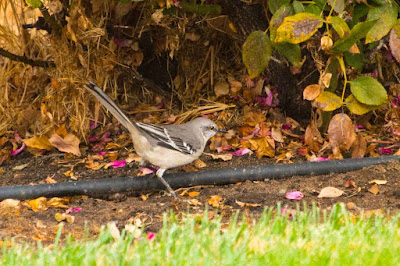 With no trips to Skunkville, I had to find something to do.  This is the last dinner from Every Plate.  That brown stuff on the left is Israeli couscous.  It's a pasta of sorts, round little white pearls of something that roll like marbles when you drop them on the floor ... like breaking your Grandmother's string of pearls.

I tried to save as much as possible but those under the fridge were unrecoverable.  That little foray is what caused the veggies to be a little too toasty, rather on the black side.  The sour-cream-panko covered chicken was iffy at best.  This one gets an F ... FAIL ... head for the cemetery!! 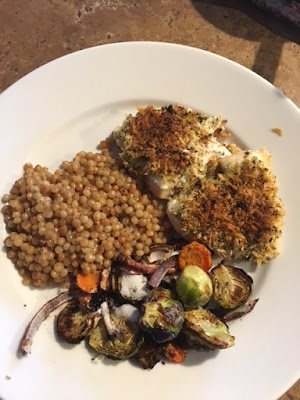 In the meantime, I've read up on skunk behavior.  It seems they are very particular about their territory and will probably find their way back.  RATS!!  I'm keeping the trap at the ready.

I'm also getting the State Trappers personal phone number.  They tell me he will come and get them for release, then return your trap.  That works for me.  It has been rather exciting, although somewhat dangerous since skunks carry lots of diseases, therefore the tarp, gloves and old clothes.  It was very satisfying to be the harbinger of a relocation and not get skunked ... at least THIS time!!

Posted by Nancy Kissack at 4:58 AM